Analysis: Shaken but not stirred: bond markets may weather hawkish Fed for now 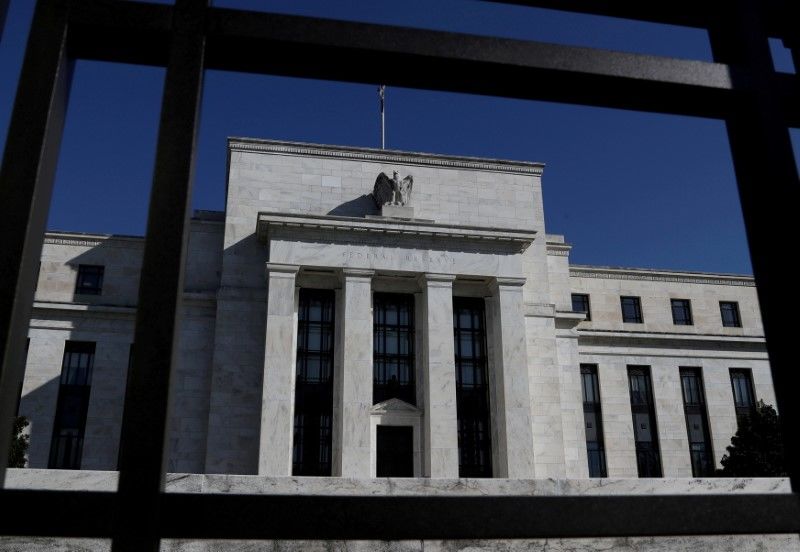 LONDON (Reuters) - A hawkish shift at the U.S. Federal Reserve has ended a weeks-long rally in bond markets, but don't bet on a repeat of the sharp selloff seen earlier this year just yet.

Investors scarred by a sharp bond selloff in February, which also hit stocks, have reason to be uneasy.

Yet unusual short-term supply and demand dynamics and strong global demand for safe-haven bonds, squeezed by an acceleration of money-printing in the past year, could limit a larger selloff.

Such forces may also help explain why bond markets have proven resilient as inflation, the enemy of fixed income, rises. U.S. inflation hit 5% in May, its highest level since 2008, while in Britain and the euro zone inflation has shot above targets of roughly 2% as economies emerge from lockdowns.

And even with tapering, central banks' heavy presence will remain significant.

"The spike in yields is not amplified this time around because positioning is cleaner and the fundamentals have not changed - the Fed will be buying bonds for a long time," said Pictet Wealth Management strategist Frederik Ducrozet.

The pool of available top-rated debt to buy in global reserve currencies has certainly been shrinking, presenting a powerful downward force on yields in Europe and the United States.

In the euro area, the European Central Bank has been hoovering up bonds under its 1.85 trillion euro ($2.21 trillion)pandemic-fighting programme - it now owns almost a third of the German, Dutch and Finnish bond markets.

Analysts estimate this has helped push the free-float of bonds in benchmark issuer Germany to sub-20%, historic lows.

In contrast, the Fed's equivalent buying ratio is 37% of U.S. deficits - the impact has been to almost double the share of Treasuries in the past decade in global "free float" bond indices of the four top reserve currencies to 60%.

"The continuous reduction of the free float has an important impact on the yield level," said Patrick Krizan, an economist at Allianz Research.

This is happening at a time when unusual - albeit temporary - factors in the United States are keeping government bond yields lower than they otherwise would be, experts say.

The U.S. debt ceiling, a Congress-mandated cap on the amount the government can borrow, will be reimposed on July 31 after being suspended during the pandemic.

To avoid breaching the ceiling, the U.S. Treasury has run down its cash balance. As of June 9, its cash balance was around $670 billion, versus $1.8 trillion last October. It is targeting $450 billion on July 31.

As cash is pulled from the Treasury General Account, bond issuance has been lower than anticipated.

Robin Brooks, chief economist at the Institute of International Finance, estimates issuance for the three months to June will come in at $70 billion, far below forecasts of $463 billion and less than the $240 billion the Fed is buying quarterly.

Much of the money the Treasury spends ends up on bank balance sheets, often in money-market funds.

The scale of money-market cash was evident on Monday when the Fed accepted a record $583.89 billion in bids for its overnight Reverse Repurchase Facility, versus $450 billion three weeks ago and next to nothing in March.

Structural demand from U.S. pension funds for Treasuries and inflows into bonds from domestic investors is also pinning yields lower.

David Kelly, strategist at JPMorgan Funds, notes that data from the Investment Company Institute shows more than $350 billion has flowed into long-term bond funds and exchange trading funds this year versus $152 billion into equities.

"There's structural demand out there that is not insignificant," said Josh Lohmeier, Aviva's head of north American investment grade credit.

(Reporting by Dhara Ranasinghe in London; additional reporting by Karen Pierog in Chicago; Editing by Tommy Wilkes and Pravin Char)