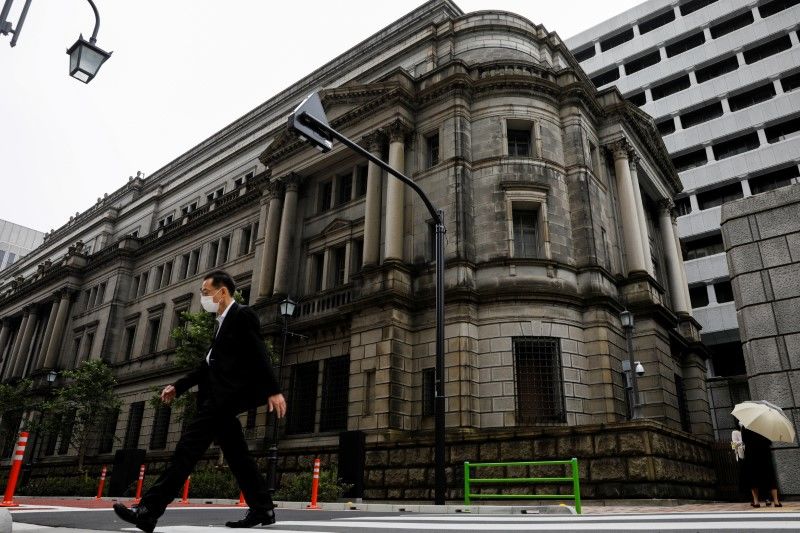 TOKYO (Reuters) - The Bank of Japan surprised markets on Friday by unveiling a plan to boost funding for fighting climate change, joining a growing number of central banks stepping up efforts to address its economic and financial fallout.

The central bank also maintained its massive stimulus to support the economy and extended a September deadline for its pandemic-relief programme, suggesting that Japan will lag well behind the United States in ending crisis-mode policies.

"In Japan, inflation had not reached 2% even before the pandemic. As such, we must continue with our ultra-loose monetary policy even after the pandemic subsides, in order to achieve our 2% inflation target," BOJ Governor Haruhiko Kuroda told a briefing after the policy decision.

The BOJ said it will launch the climate change scheme by the end of this year, and will release a preliminary outline of its plan at its next policy-setting meeting in July.

Under the scheme, the BOJ will provide funds to financial institutions that increase loans and investment for activities aimed at combating climate change.

While details have yet to be announced, the BOJ said it will be modeled after a similar programme that offers cheap loans to financial institutions that boost lending in areas considered to be growth industries.

"It is also jumping on the band-wagon of the rising tide among central banks towards linking monetary policy to climate change," she said.

While the BOJ does not rule out buying green bonds in the future, the new scheme is better suited to address climate change in Japan where most companies rely on bank loans rather than raise funds from the market, Kuroda said.

"By creating this scheme, we can respond flexibly to changes in the external environment regarding climate change," he said.

Japan is among the world's most disaster-prone countries with a history of big earthquakes and typhoons. It has been hugely affected by climate change, with heavy rain and floods causing many casualties almost annually.

But many Japanese companies have dragged their feet on climate issues compared to their European counterparts, partly due to the country's heavy reliance on thermal and coal power energy.

On Friday, Sumitomo Corp's shareholders defeated a resolution requiring the trading house to align its business with international targets on climate change.

At the two-day meeting, the BOJ also kept its target for short-term interest rates at -0.1% and for long-term yields around 0%, as widely expected, and extended by six months the September deadline for its asset-buying and loan programmes.

While maintaining its assessment that the economy was recovering as a trend thanks to robust exports and output, the BOJ warned that consumption was "stagnating."

Kuroda, however, said he was more optimistic about Japan's economic outlook than at the BOJ's previous meeting in April thanks partly to stronger-than-expected overseas growth.

"Vaccine inoculation in Japan is speeding up quite a bit. If this continues, there's a chance that consumption may recover faster than expected," he said. "My personal view is that Japan's economic outlook is brighter than before."

Japan's economy shrank an annualised 3.9% in the first quarter and is seen making only a modest rebound, if any, in the current quarter as anti-virus measures weigh on consumption.

Core consumer prices in May rose 0.1% from a year earlier, marking the first year-on-year increase since March 2020 but remaining far distant from the BOJ's 2% goal.