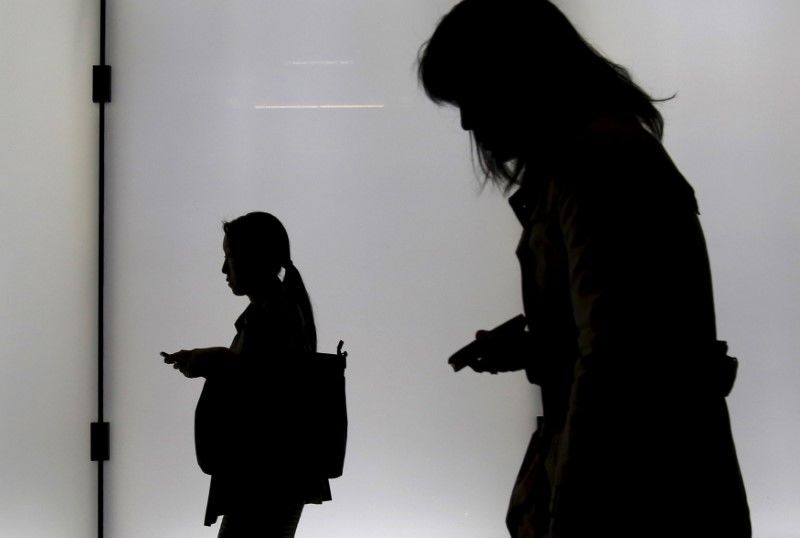 FILE PHOTO: Women holding their mobile phones are silhouetted as they walk on an overpass at a business district in Tokyo, Japan, November 5, 2015. REUTERS/Yuya Shino

TOKYO (Reuters) - Women make up fewer than 10% of managers at most Japanese companies and a big majority of firms say it will be impossible to boost this to a target of 30% this decade, a Reuters poll found.

Japan's biggest business lobby, Keidanren, is pushing for an increase in female managers, in a campaign dubbed "womenomics", aiming to empower more women and meet the employment challenge of an ageing society.

However, respondents to the Reuters Corporate Survey said that promoting more women would need changes to Japan's male-oriented corporate culture and more support in areas like childcare.

"It's impossible unless our society changes in a way that encourages women to be promoted to key posts," a service firm manager wrote in response to the poll.

The survey found women make up fewer than 10% of managers in 80% of companies in Japan, which ranked 121st out of 153 countries in a World Economic Forum report on gender parity in 2020.

Some 86% of survey respondents said it would be impossible to achieve Keidanren's 30% target by 2030.

"Until a while ago we hired many men, so it takes time to fix the balance," a chemicals maker manager wrote, pointing to the relatively small number of female employees.

"We need first to raise the ratio of female managers, but we must also reform the corporate culture," added a transportation firm manager.

Some companies questioned the need to set a numerical target.

The survey, conducted for Reuters by Nikkei Research, canvassed 481 large- and mid-size non-financial firms. About 230 firms answered the questions on condition of anonymity.

The survey also found that 36% of Japanese firms expected coronavirus-led impacts on supply and demand to stop in several months, while 32% saw no signs of improvement from the pandemic fallout. About 18% expected the effects to cease now and 9% said they had not experienced any impact.