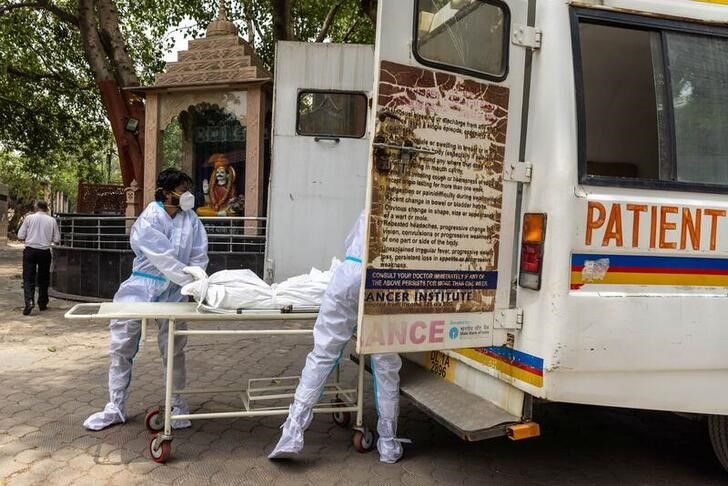 FILE PHOTO: Health workers carry the body of a person, who died from complications related to the coronavirus disease (COVID-19), for cremation at a crematorium in New Delhi, India, June 10, 2021. REUTERS/Danish Siddiqui

Coronavirus-related deaths worldwide passed 4 million on Thursday, according to a Reuters tally, as many countries struggle to procure enough vaccines to inoculate their populations.

It took over a year for the COVID-19 death toll to hit 2 million, while the next 2 million were recorded in just 166 days, according to a Reuters analysis.

Daily cases of COVID-19 hit an all-time high in Moscow on Friday, official data showed, with the number of new cases in the Russian capital tripling in two weeks to reach 9,056 amid talk of a third wave.

Moscow mayor Sergei Sobyanin said he was extending restrictions imposed earlier such as bans on public events with more than 1,000 people, shutting cafes and restaurants at night, and closing soccer fan zones set up for the European Championship.

Japan's top medical experts warned on Friday that holding the Olympic Games during the pandemic could increase infections, and said banning all spectators was the least risky option, setting up a possible collision with organisers.

The report, led by top health adviser Shigeru Omi, was released after Tokyo 2020's organising committee chief told the Sankei newspaper she wanted to allow up to 10,000 spectators at stadiums for the Games, which kick off on July 23.

Japan is pushing ahead with hosting the delayed Games despite worries about another surge in infections and strong public opposition. Organisers have banned spectators from overseas.

A third wave of infections is likely to hit India by October, and although it will be better controlled than the latest outbreak the pandemic will remain a public health threat for at least another year, according to a Reuters poll of medical experts.

The June 3-17 snap survey of 40 healthcare specialists, doctors, scientists, virologists, epidemiologists and professors from around the world showed a significant pickup in vaccinations will likely provide some cover to a fresh outbreak.

Of those who ventured a prediction, over 85% of respondents, said the next wave will hit by October, including three who forecast it as early as August and 12 in September. The remaining three said between November and February.

Britain has reported another steep rise in weekly reported cases of the Delta coronavirus variant, Public Health England data showed on Friday. Concerns about the variant prompted Prime Minister Boris Johnson to decide this week to delay the final lifting of lockdown restrictions.

Notting Hill Carnival, billed as Europe's biggest street party, has been cancelled for a second year in a row, organisers said on Friday.