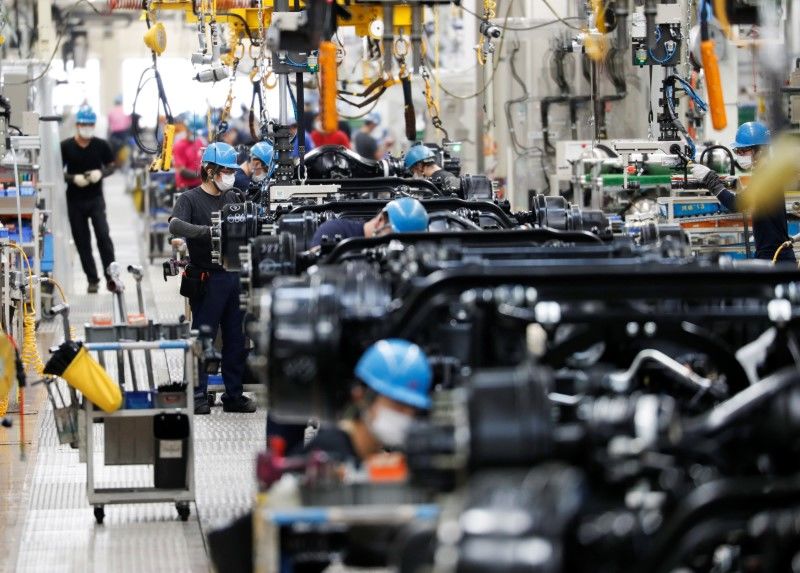 FILE PHOTO: Employees wearing protective face masks work on the automobile assembly line as the maker ramps up car production with new security and health measures as a step to resume fully operation, during the outbreak of the coronavirus disease (COVID-19), at Kawasaki factory of Mitsubishi Fuso Truck and Bus Corp., owned by Germany-based Daimler AG, in Kawasaki, south of Tokyo, Japan May 18, 2020. REUTERS/Issei Kato

TOKYO (Reuters) - Business confidence among Japan's large manufacturers likely improved in the second quarter thanks to a boost to exports and corporate profits from a global demand recovery, a Reuters poll showed on Friday.

Other data next week is expected to show the Tokyo-area consumer price index (CPI) fell again in June as slow consumer demand amid the coronavirus pandemic caused a further easing of prices.

The Bank of Japan's quarterly tankan business sentiment survey was expected to show the headline index for big manufacturers' sentiment rose to plus 15 from plus 5 in March, the poll of 16 economists showed.

An increase would mark the fourth consecutive quarter of improvement.

"Large manufacturers are expected to see corporate profits improve as the yen remains on a depreciating trend, and are supported by steadily increasing conditions in exports due to a recovery in overseas economies," analysts at the Japan Research Institute wrote.

The mood among big non-manufacturers was also likely to improve, turning positive for the first time since the first quarter of last year, the poll showed.

But big non-manufacturers' sentiment was still expected to remain more subdued than that of manufacturers, likely coming in at plus 3 from minus 1 in March.

The forecasts suggested firms are shaking off more of the drag from the coronavirus pandemic, but it continues to weigh heavily on non-manufacturers.

After contracting in January-March, Japan's economy is expected to grow at a much slower pace than other major economies such as the United States in the second quarter, in part due to anti-virus measures and a late vaccine rollout.

For the three months ahead, big manufacturers' optimism was expected to improve at a slower pace, likely rising to plus 18, the poll showed.

The big non-manufacturers' outlook index was seen rising to plus 8, it showed.

Big firms will likely raise their capital spending plans by 7.2% for the current fiscal year as the outlook improves.

The BOJ will announce the tankan quarterly survey results at 8:50 a.m. on July 1.

The BOJ on Friday maintained its massive stimulus, while it also said it will launch a new scheme to encourage financial institutions to boost lending and investment for fighting climate change.

Separate data from the internal ministry due out on June 25 is expected to show Tokyo-area core consumer prices, which exclude fresh food but include oil products, fell 0.1% in June from a year earlier, the poll found.