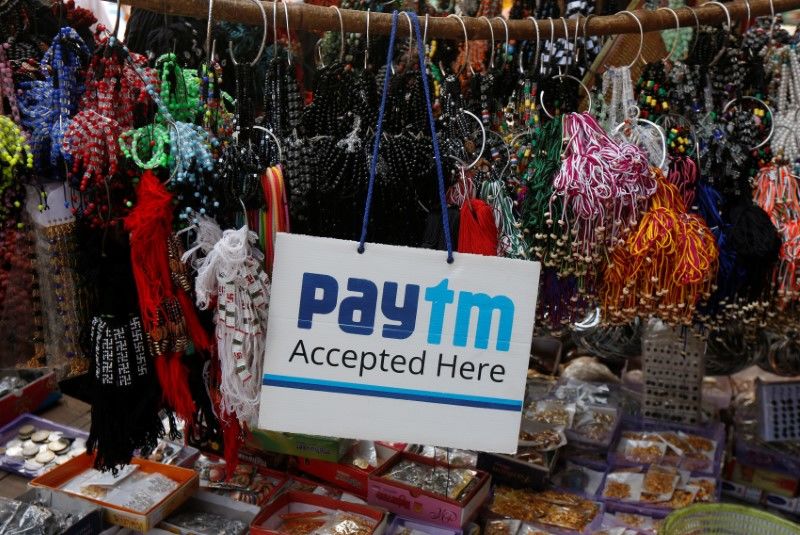 FILE PHOTO: An advertisement of Paytm, a digital wallet company, is pictured at a road side stall in Kolkata, India, January 25, 2017. REUTERS/Rupak De Chowdhuri/File photo

NEW DELHI (Reuters) - Indian digital payments firm Paytm is seeking shareholder approval to sell up to 120 billion rupees ($1.62 billion) in new stock in what could be the South Asian country's biggest-ever initial public offering at a total of $3 billion.

Paytm, which counts China's Alibaba and Japan's SoftBank as backers, will sell new shares and will also have an option to retain an over-subscription of up to 1%, the company said in a notice for an extraordinary general meeting (EGM) of shareholders in Delhi on July 12.

The company is aiming to raise $3 billion via the public listing on Indian bourses, a source familiar with the matter told Reuters.

It has hired banks JPMorgan Chase, Morgan Stanley, ICICI Securities and Goldman Sachs for the IPO, the source added, declining to be identified as the matter is private.

At the EGM, Paytm also plans to propose that its founder, Vijay Shekhar Sharma, be relieved from his role as the company's "promoter", the company said in the notice.

Paytm did not respond to a request for comment.

Launched a decade ago as a platform for mobile recharging, Paytm grew quickly after ride-hailing firm Uber listed it as a quick payment option. Its use swelled further in 2016 when a ban on high-value currency bank notes boosted digital payments.

Paytm has since branched out into services including insurance and gold sales, movie and flight ticketing, and bank deposits and remittances.