TOKYO (Reuters) -Up to 10,000 domestic spectators will be allowed in Tokyo 2020 venues, Olympics organisers said on Monday, a decision that cuts against the recommendation of medical experts who said holding the event without fans was the least risky option.

The announcement ends months of speculation and highlights Japan's determination to push on with the Games and salvage the multi-billion-dollar extravaganza amid public opposition and deep concern about a resurgence in infections https://tmsnrt.rs/2RDKuP7.

The decision was widely expected after some recent comments by organisers and as the government's own medical experts last week appeared resigned to the event going ahead with fans.

Japan has largely avoided the kind of explosive coronavirus outbreaks that have devastated other countries, but the vaccine roll-out was initially slow and the medical system pushed to the brink in some places.

The limit for the Games, scheduled to begin on July 23, "will be set at 50% of venue capacity, up to a maximum of 10,000 people", organisers said in a statement.

But the cheering - for a victory or a plucky underdog - will likely be quelled as shouting will be prohibited. Organisers also said masks would be required and spectators be requested to travel directly to venues and go straight home.

Numbers could be further reduced after July 12, depending on whether "quasi emergency" COVID-19 measures, due to expire the day before, are extended or due to any other anti-infection measures in force at the time, according to organisers.

Spectators from overseas have already been banned. The national stadium, built for the 1964 Tokyo Olympics and due to host athletics and soccer this time, would have held 68,000 fans but now will be at a sliver of that.

However, TV deals, such as that with NBCUniversal for 17 nights of U.S. primetime coverage, will ensure the Games are beamed around the world.

Organisers are still considering whether to allow alcohol to be served in venues, Tokyo 2020 President Seiko Hashimoto said. Even as experts voiced concern, Hashimoto had previously said she was eyeing allowing up to 10,000 fans.

Some of the country's top health experts on Friday said banning spectators would be the least risky option.

"I am concerned not just about the increase in the number of people coming to watch the Olympics itself but also about the loosening of people's sense of urgency by hosting the Olympics with spectators," Haruka Sakamoto, a physician and researcher at Keio University, told Reuters before the decision.

Some 65% of the public want the event postponed again or cancelled, a poll by broadcaster Asahi News Network found. Nearly 70% said they thought the Games would not be held safely and securely, the poll showed.

Events with spectators have already been happening in Japan. Some 7,600 fans attended a Yakult Swallows pro baseball game in Tokyo on Sunday.

"Spectators will come from various places and enter the venue, possibly leading to an influx of people and clusters, so this is a concern if that happens," said 48-year-old IT worker Masahiro Gomi.

"However, it seems like sports such as baseball are taking place as usual so I think 10,000 spectators may be alright."

Ticket revenues are likely to be reduced by more than half from an earlier expected 90 billion yen ($817.14 million), Tokyo 2020 CEO Toshiro Muto told a briefing.

He said he wanted to discuss with the Tokyo and national governments on how to cover the shortfall.

Initially organisers sold some 4.48 million tickets and the government had expected a windfall for tourism. Some 840,000 tickets have since been refunded, but the caps mean another decrease, bringing the total number down to 2.72 million tickets, Muto said.

Capping the number of fans at both the Olympics and Paralympics would reduce the expected positive economic impact from the Games by about 5% according to Nomura Research Institute's Takahide Kiuchi.

The announcement followed five-way talks among Tokyo 2020 organisers, the Japanese government and that of the capital, Tokyo, and the international Olympic and Paralympic committees.

Before the meeting, IOC President Thomas Bach said the vaccination rate for athletes and officials residing in the Olympic village was now "well above 80%", exceeding the IOC's initial expectations.

Prime Minister Yoshihide Suga has said he would not rule out holding the Olympics without spectators if the capital was under a state of emergency for COVID-19.

"In the event a state of emergency was declared then we can't rule out not having spectators," he told reporters during a tour of vaccination sites in Tokyo on Monday.

Last week, Suga decided to lift a state of emergency for Tokyo and eight other prefectures that had suffered a resurgence.

The government retained less tough curbs for seven of the nine prefectures, including Tokyo, until July 11. 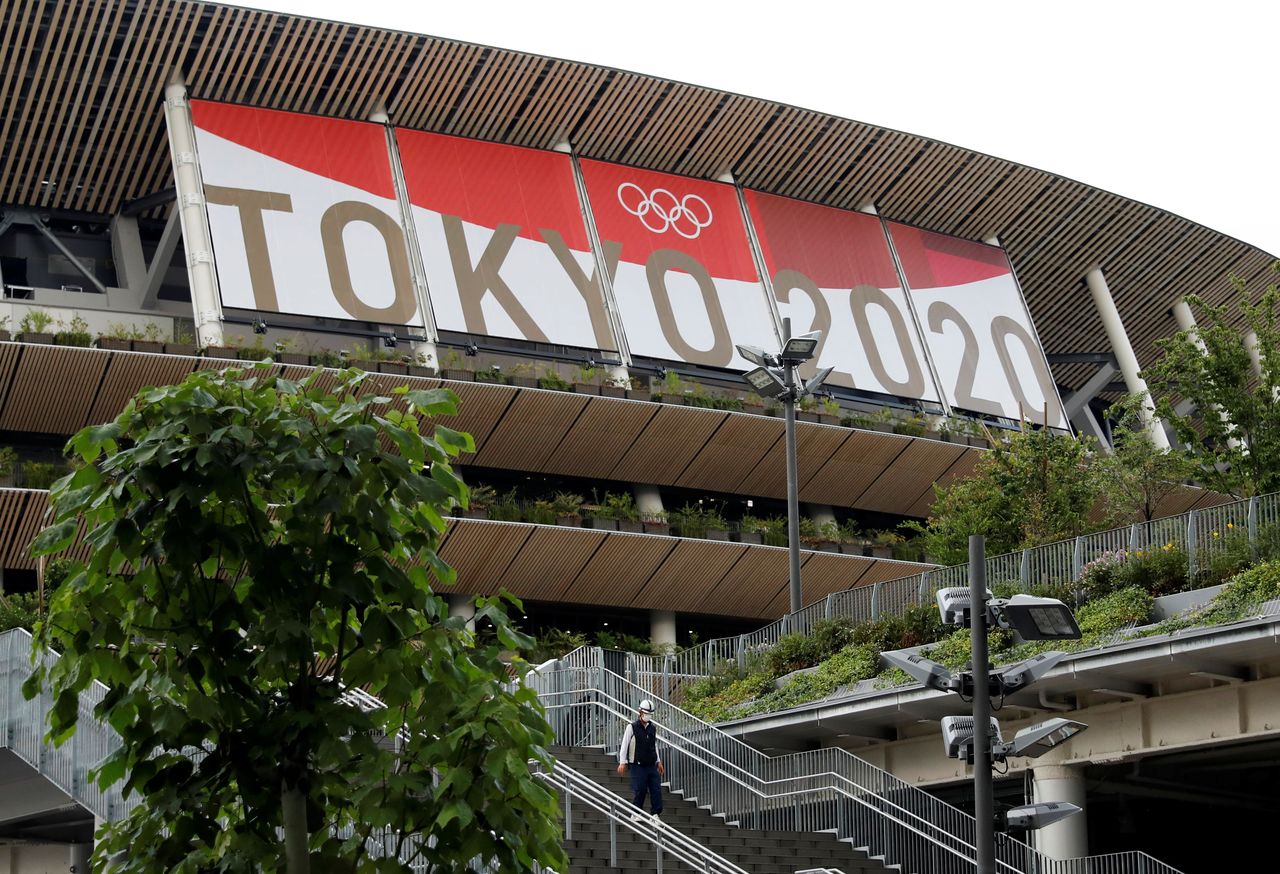 A construction worker is seen at Olympic Stadium (National Stadium), main stadium for Tokyo 2020 Olympic Games that have been postponed to 2021 due to the COVID-19 pandemic, in Tokyo, Japan June 23, 2021, on the day to mark one month to go until the opening of the Olympic Games. REUTERS/Issei Kato 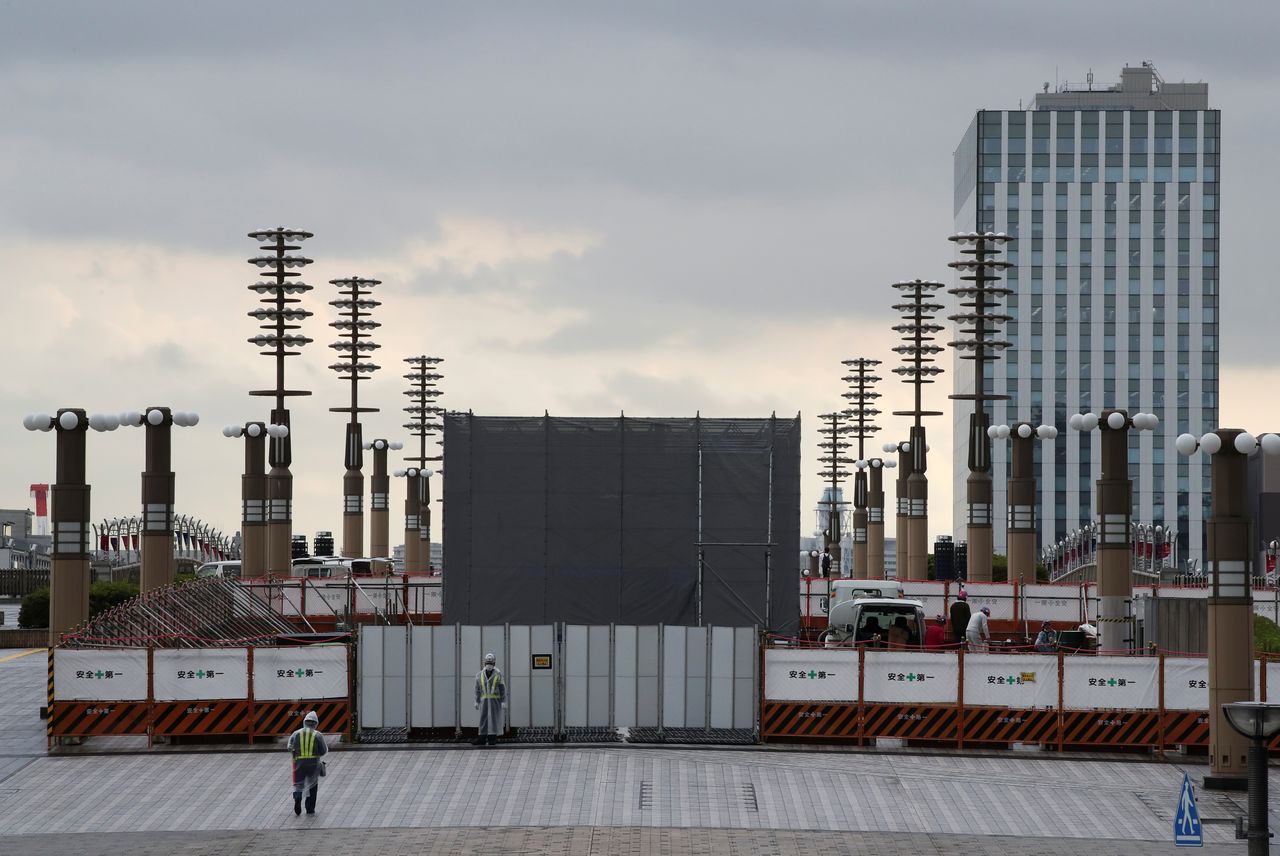 People work at the construction site to set up the second cauldron where the Tokyo 2020 Olympic Games torch will be placed during the Olympic Games, one month ahead of the opening of the games in Tokyo, Japan, June 23, 2021. REUTERS/Kim Kyung-Hoon 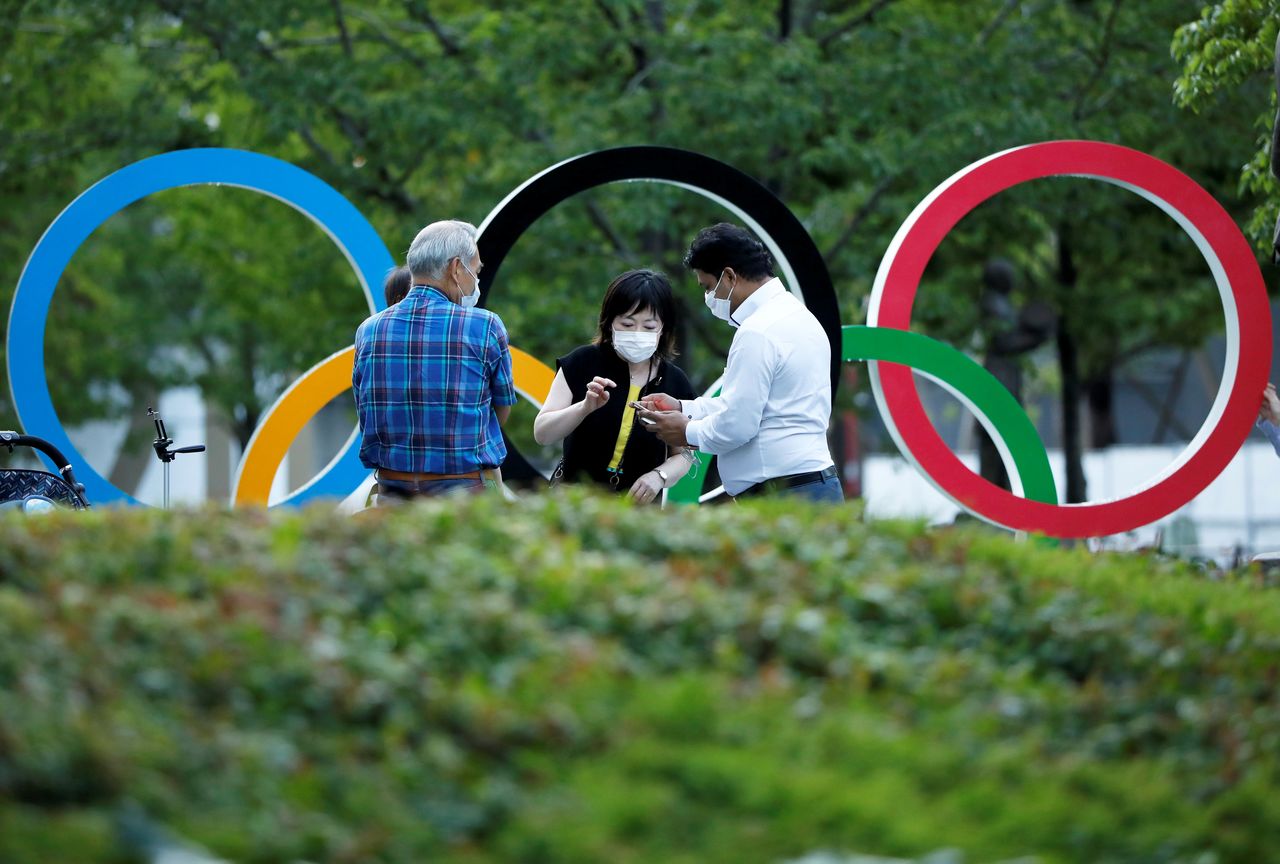 People chat next to Olympic Rings monument outside the Japan Olympic Committee (JOC) headquarters near the National Stadium, the main stadium for the 2020 Tokyo Olympic Games that have been postponed to 2021 due to the COVID-19 pandemic, in Tokyo, June 23, 2021 on the day to mark one month to go until the opening of the Olympic Games. REUTERS/Issei Kato 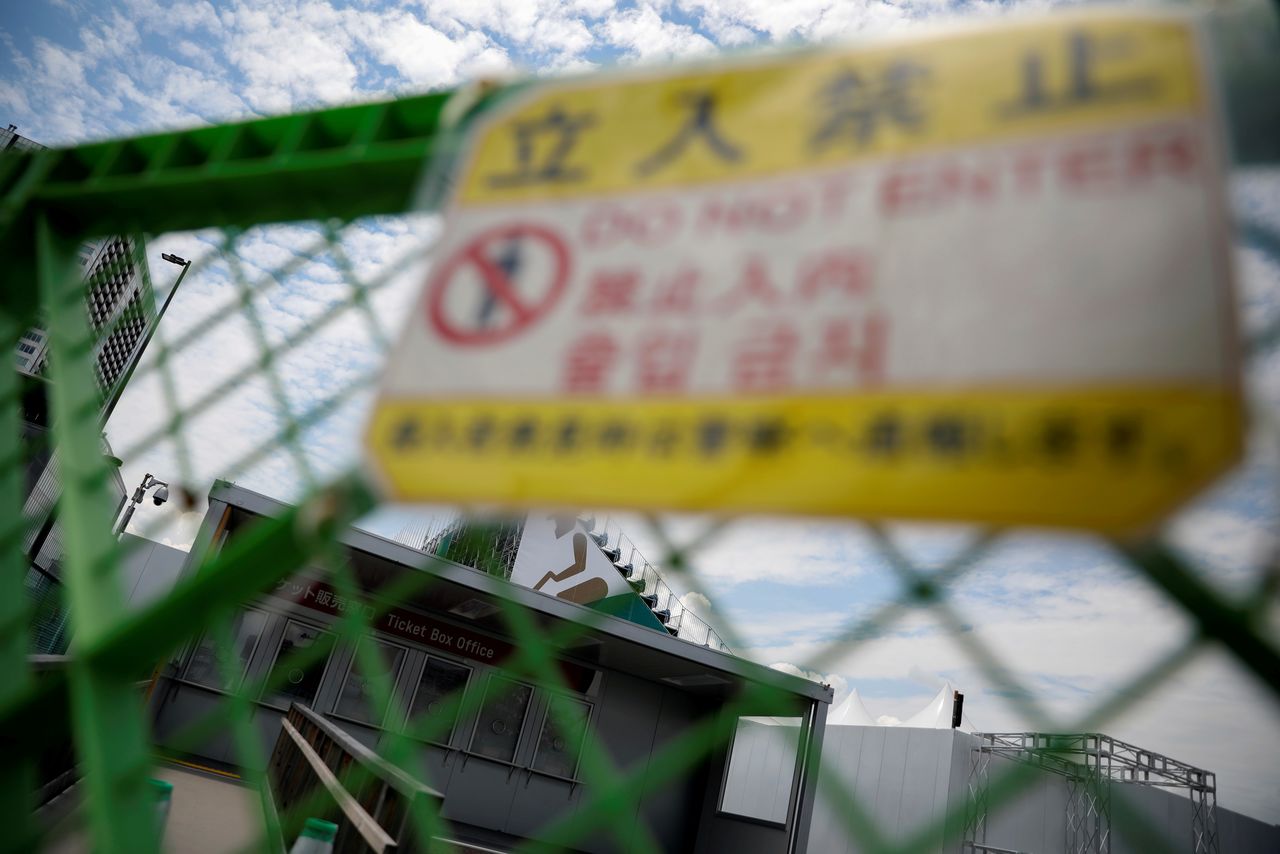 FILE PHOTO: Ticket box office is seen through a fence in preparation for the Tokyo 2020 Olympic Games that have been postponed to 2021 due to the coronavirus disease (COVID-19) outbreak, at Ariake Urban Sports Park in Tokyo, Japan June 22, 2021. REUTERS/Issei Kato