Postcards from Tokyo: light and shadow ahead of pandemic Olympics

By Maki Shiraki and Sakura Murakami

TOKYO (Reuters) - The Tokyo Tower and other landmarks were lit in special Olympic colours in April to mark 100 days before the Summer Games opened, but were shrouded in clouds of mist when rain enveloped the Japanese capital that night.

Light and shadows are the hallmarks of these Games, the second time Tokyo is the host.

Half a century earlier, in 1964, the Games heralded a new era of modernity for a city risen from the ashes of a war that had ended fewer than two decades before. Their symbol was the sleek high-speed bullet trains that began running just days before the opening ceremony.

But in April 2020, the trains glided through Tokyo with most seats empty. Residents were asked to stay home as the pandemic swept through Japan and the world. The Olympics had been postponed a month earlier.

Now, they are on again, due to start in July. But the anticipated, exhilarating festival of national pride appears to have been muted to a joyless duty.

"I can't seem to enjoy myself as much as I did last time," an elderly woman who saw the first Games says to her husband as they rest during a stroll - in the evening, to avoid the virus.

The COVID-19 pandemic isn't over yet. There are still strong calls to cancel or postpone the Olympics. A quasi-state of emergency remains in place just a month before the Games begin.

They will be held in a "safe bubble" of vaccinated athletes and delegations, a celebration of sport divorced from the host city and its people.

But life has gone on even as the city lurches in and out of soft lockdowns. Streets have emptied on some nights, filled on others with people and the hubbub of life.

In images of the city, couples admire sights from tall buildings and watch Noh theatre demons dance. Diners delight in sushi served on a conveyor belt, traditional sweets like jewels.

But nearly all Tokyo residents are masked. White surgical masks dominate, but here and there is variation - hand-made white lace, traditional designs. Some are printed with anime characters.

When case numbers fall, people meet in front of Tokyo landmarks, not caring what warning is in place. They pulse across the Shibuya "scramble" road crossing in ordered chaos, immerse themselves in light and colour at museums.

When case numbers swell, the streets empty, revealing the city's bones: the Imperial Palace in its majesty, the Tokyo Tower glittering at night. The trains that clatter through.

As the tide of people ebbs and flows, the scenery constantly changes; vary the angle at which you view the city, and it shifts.

Tokyo is like a kaleidoscope with countless geometric patterns, the colours of the pattern changing slightly depending how the tube is tilted and how the light enters.

Tokyo is never boring. It has survived earthquakes and war. It will survive the coronavirus. 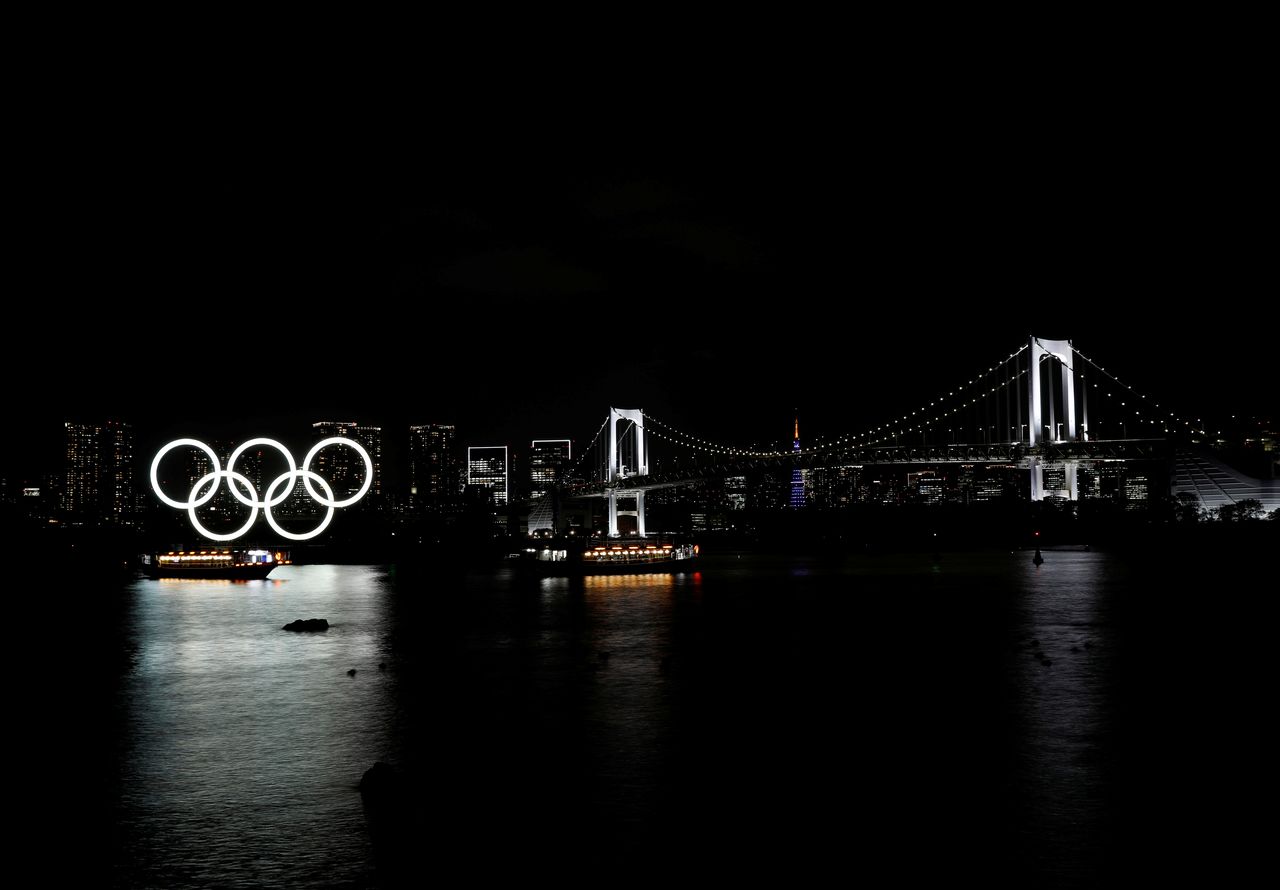 Boats sail past the giant Olympic rings and the Rainbow Bridge on the waterfront area of Odaiba Marine Park in Tokyo, Japan, April 2, 2021. REUTERS/Kim Kyung-Hoon 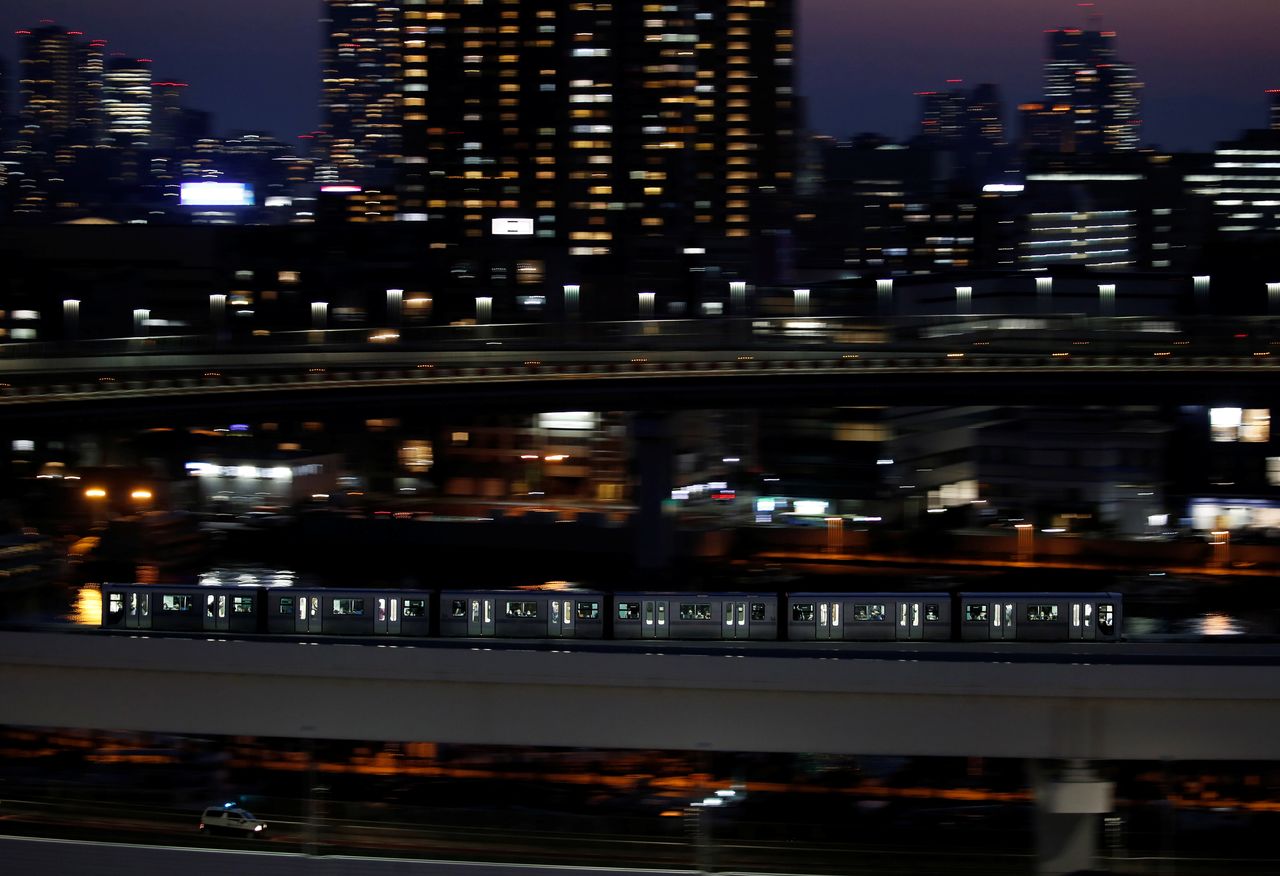 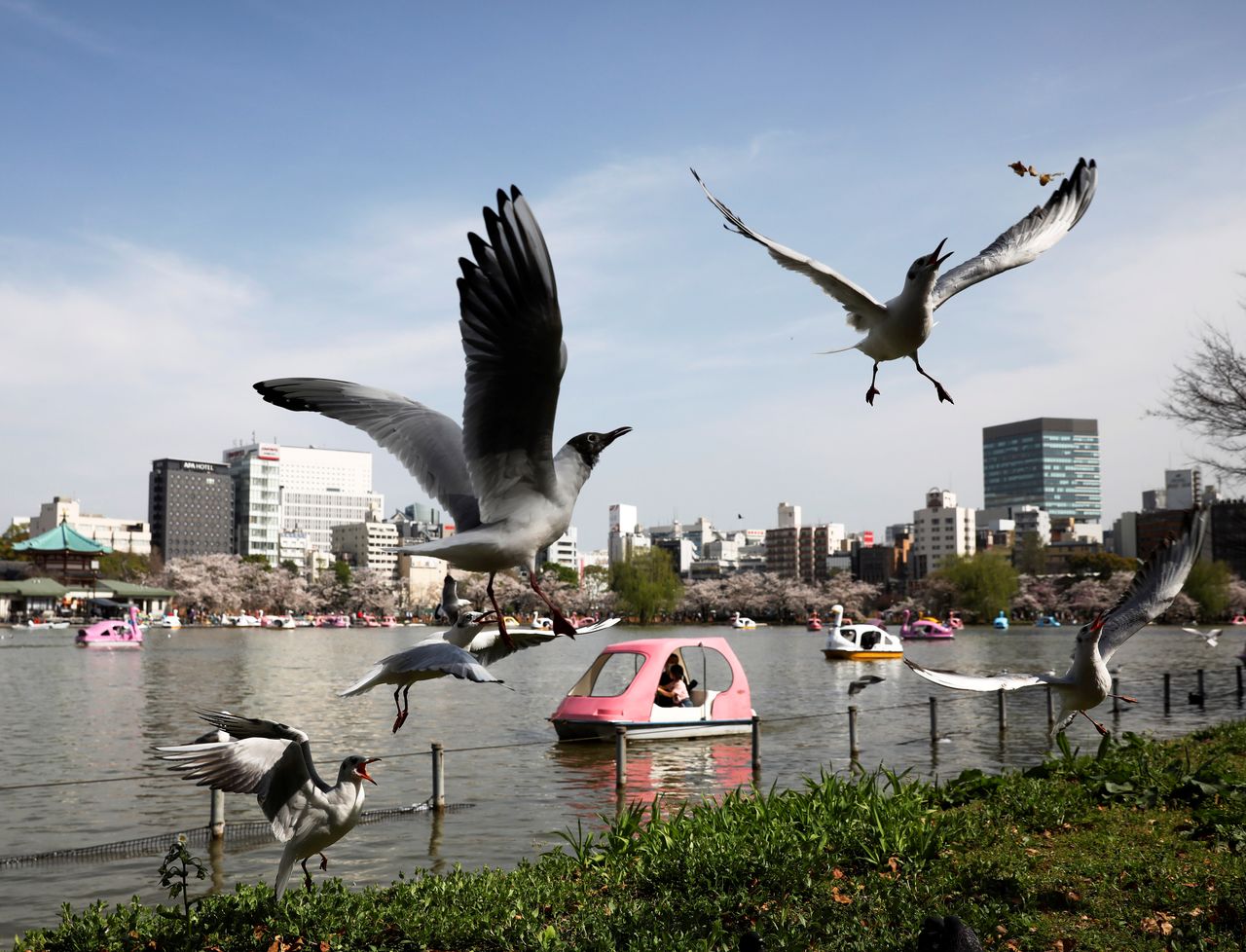 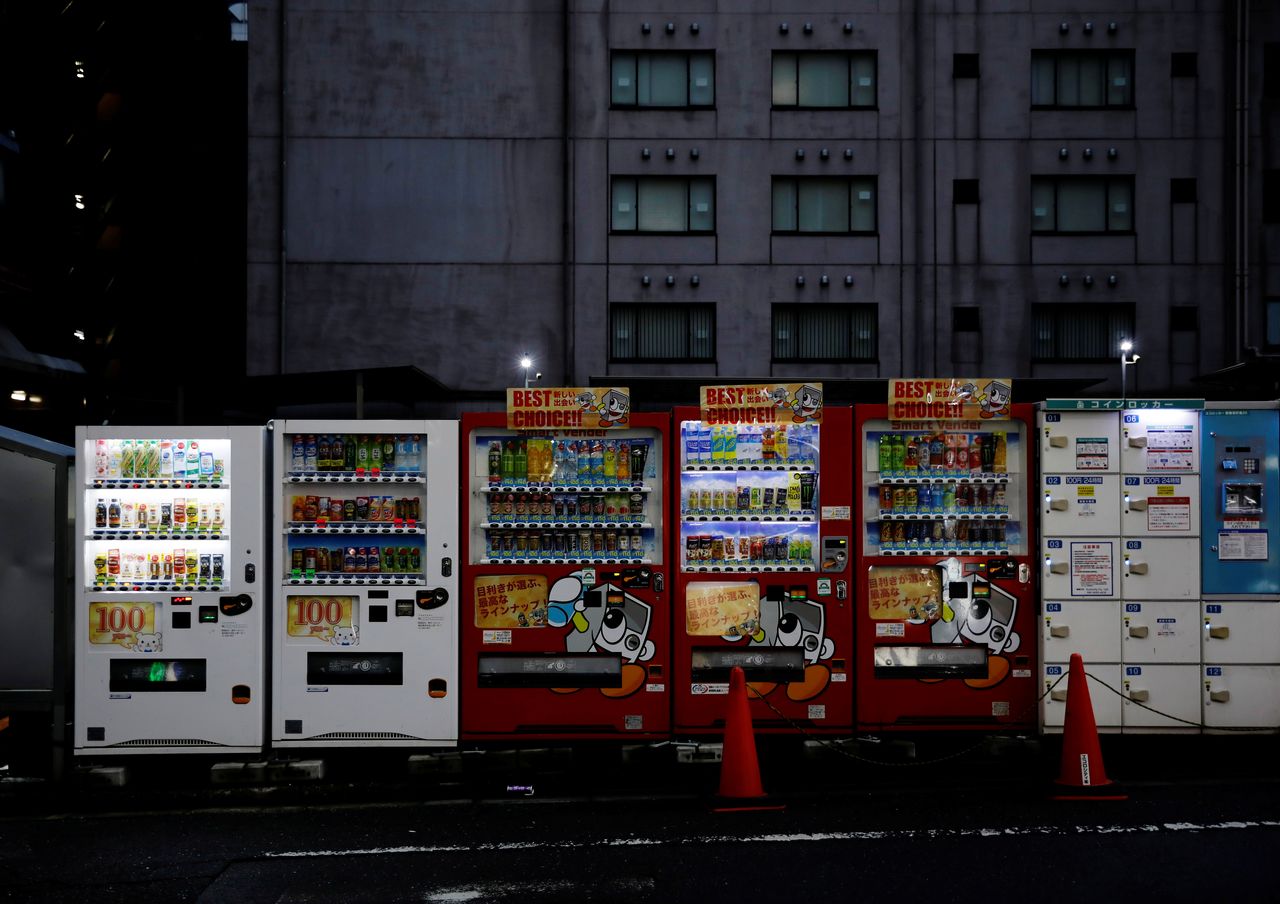 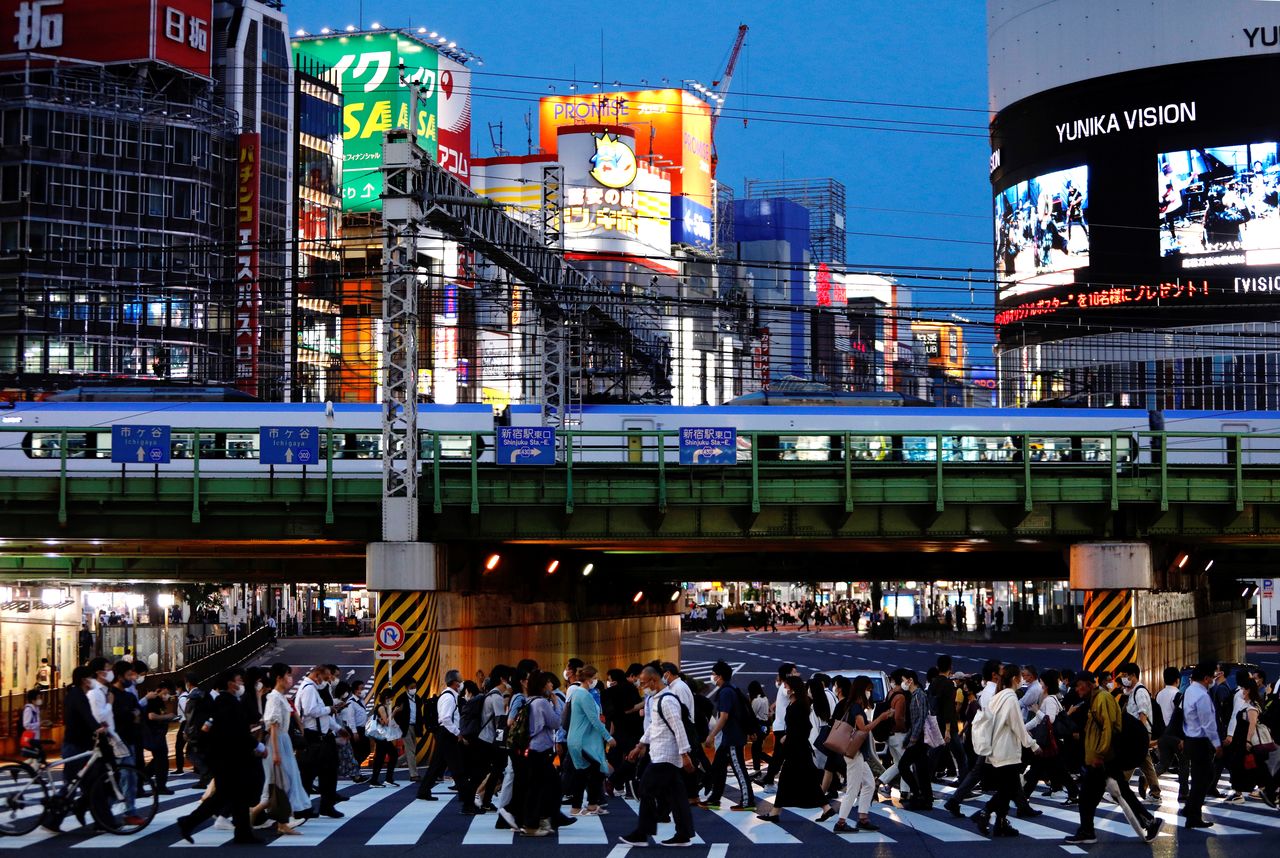 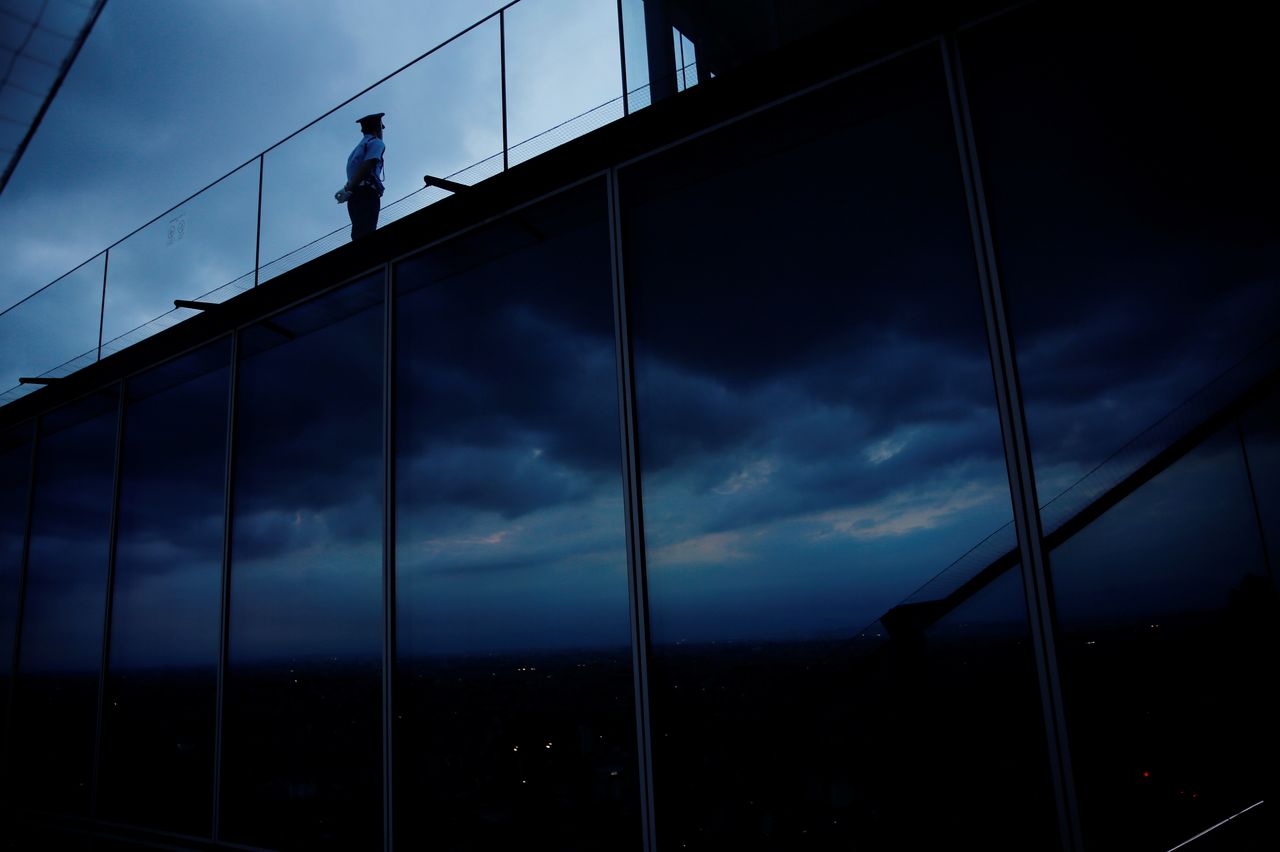 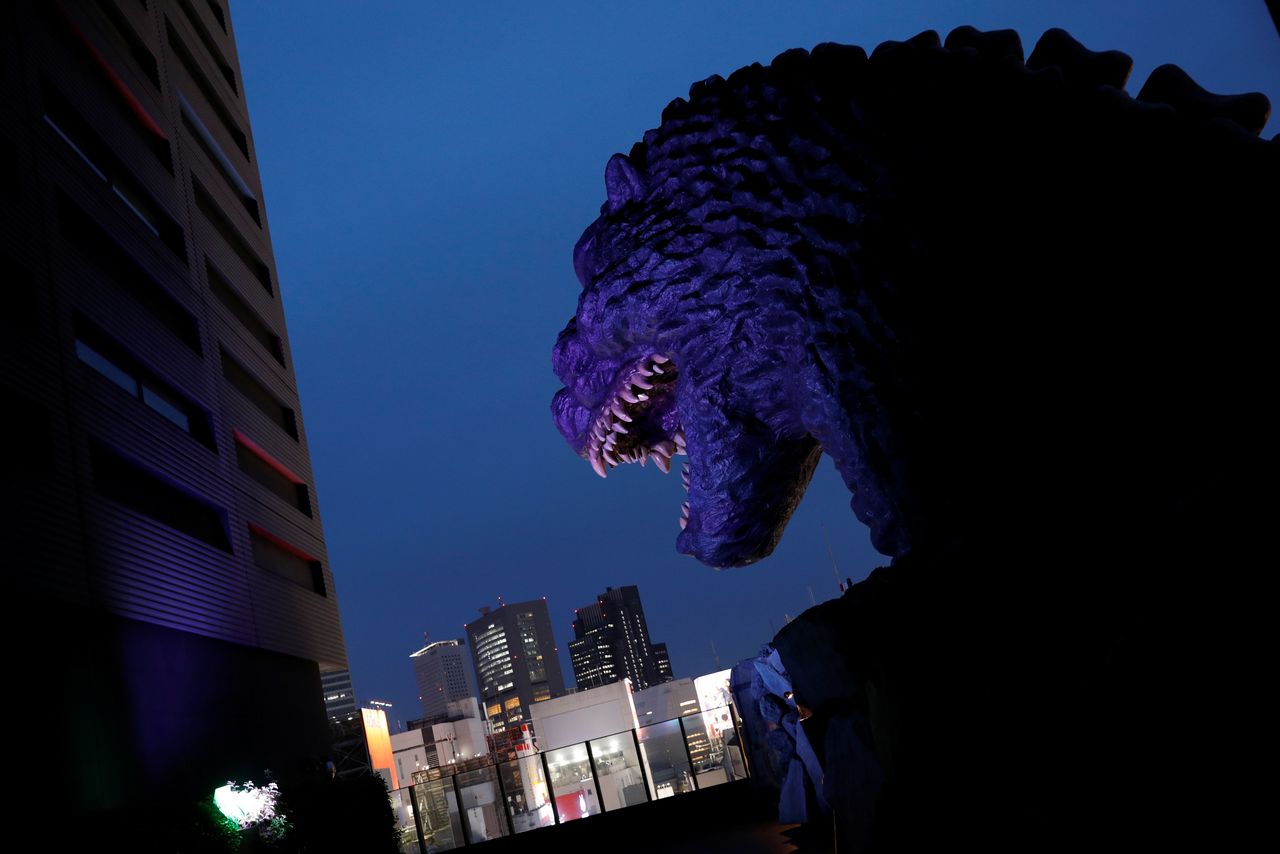 The head of Godzilla is displayed on the 8th floor of Gracery hotel in Kabukicho, a nightlife area in Shinjuku, Tokyo, Japan, June 3, 2021. REUTERS/Androniki Christodoulou 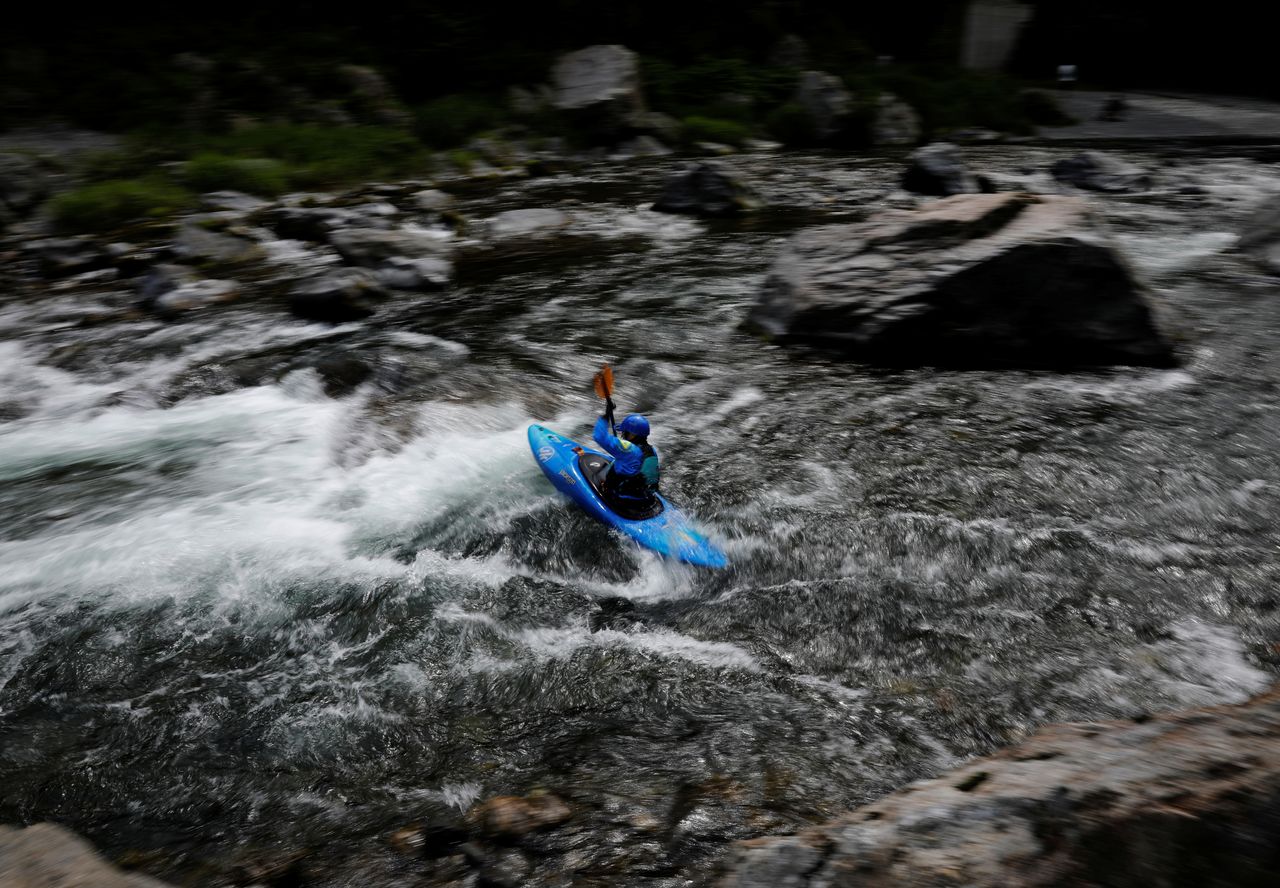 A man rides a kayak in Okutama, on the outskirts of Tokyo, Japan, May 29, 2021. REUTERS/Kim Kyung-Hoon 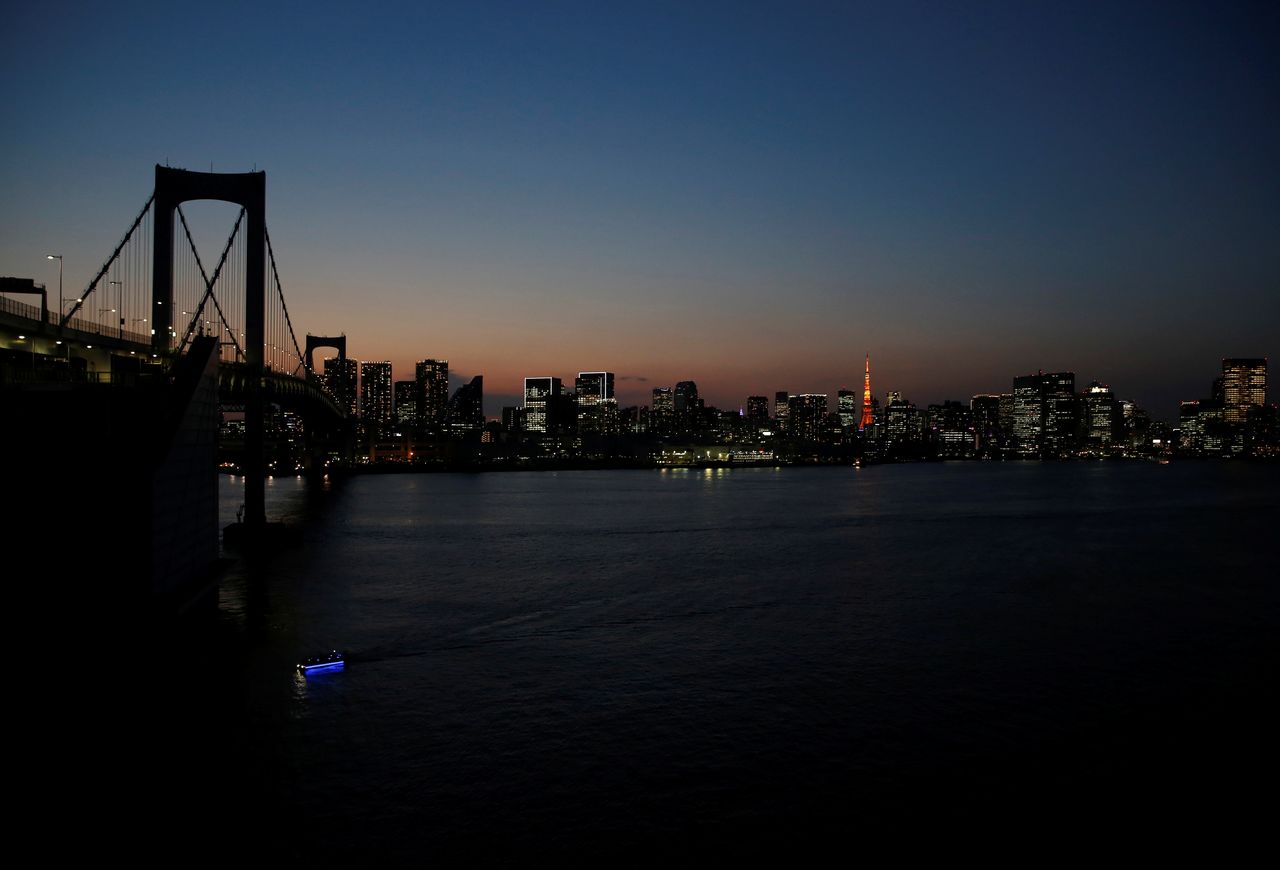 The Rainbow Bridge and buildings are pictured during sunset in Tokyo, Japan, April 7, 2021. REUTERS/Kim Kyung-Hoon 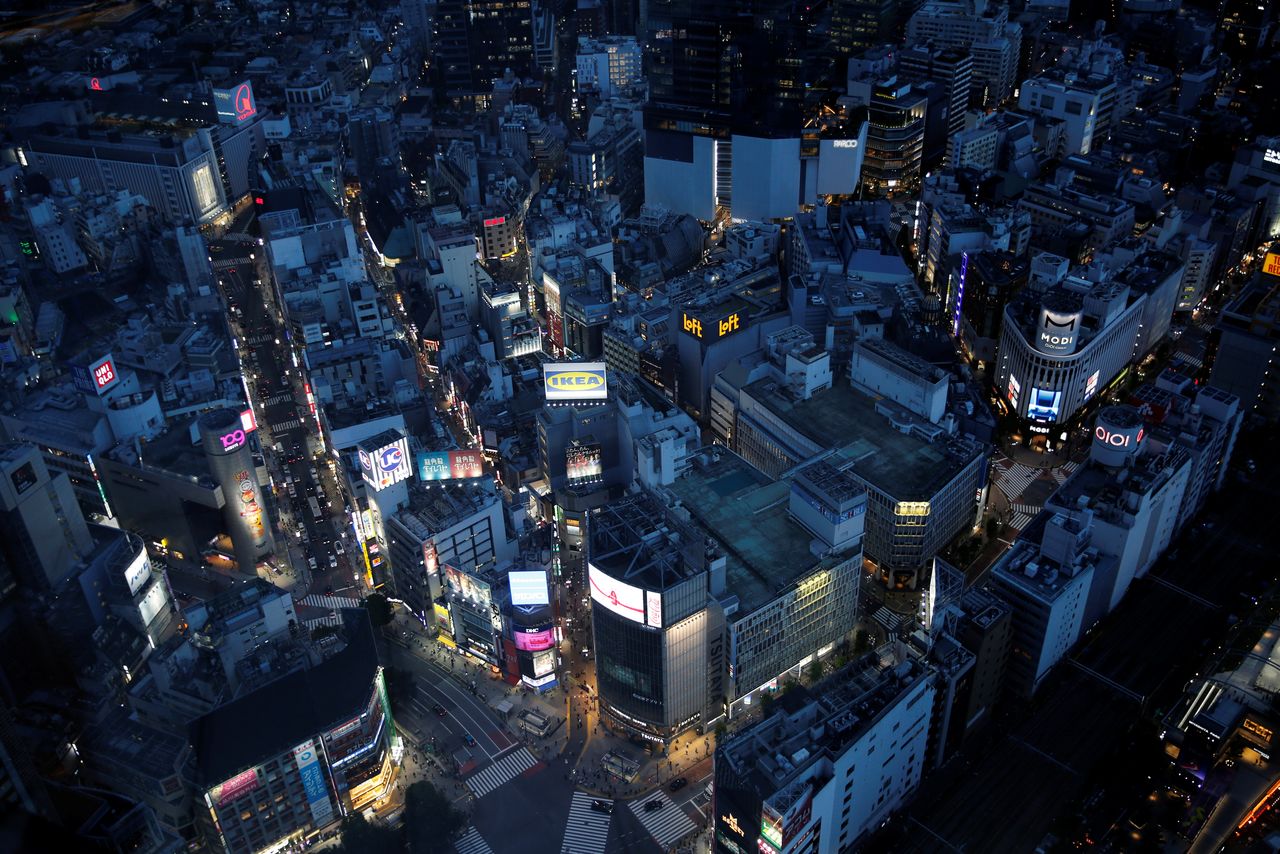 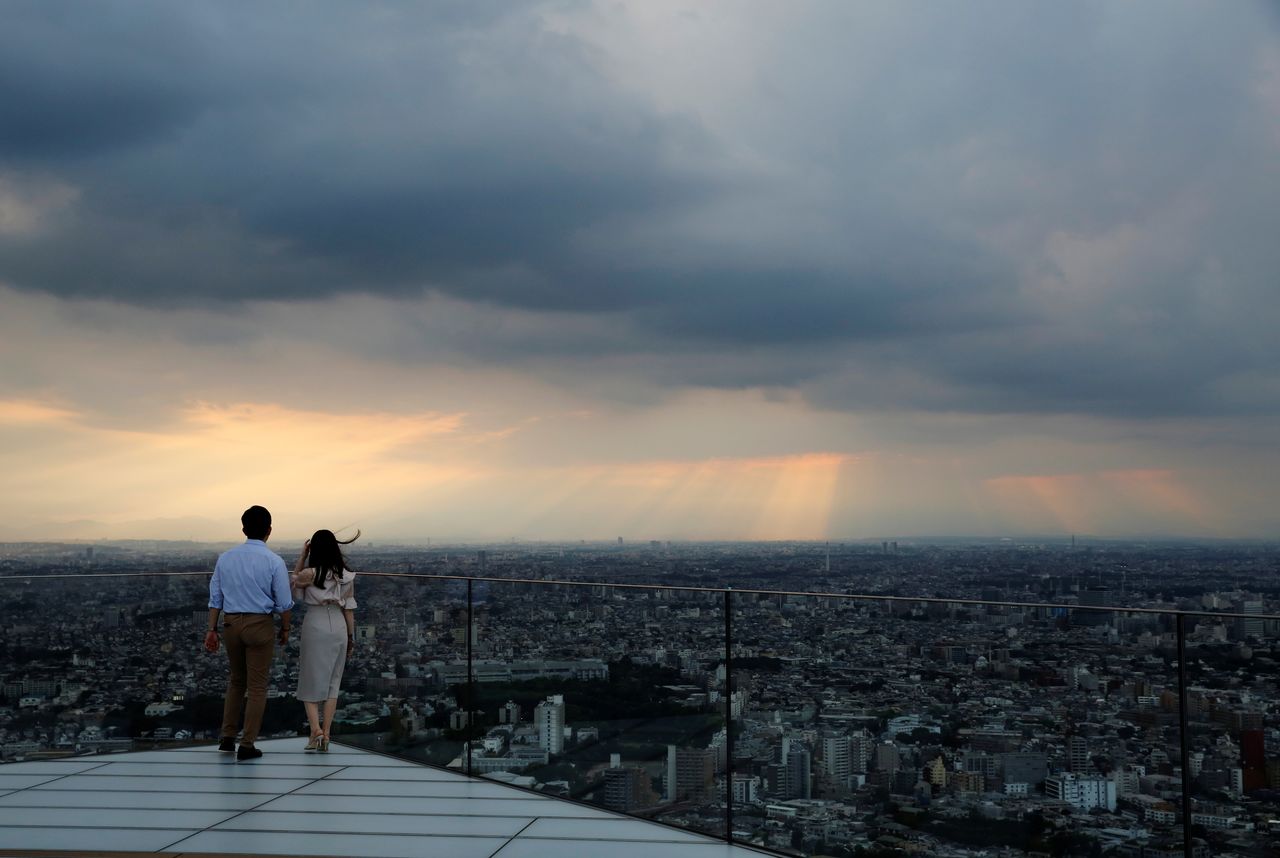 Visitors look at the skyline as they stand on Shibuya Sky, the observation deck of Shibuya Scramble Square, in Tokyo, Japan, June 1, 2021. REUTERS/Kim Kyung-Hoon 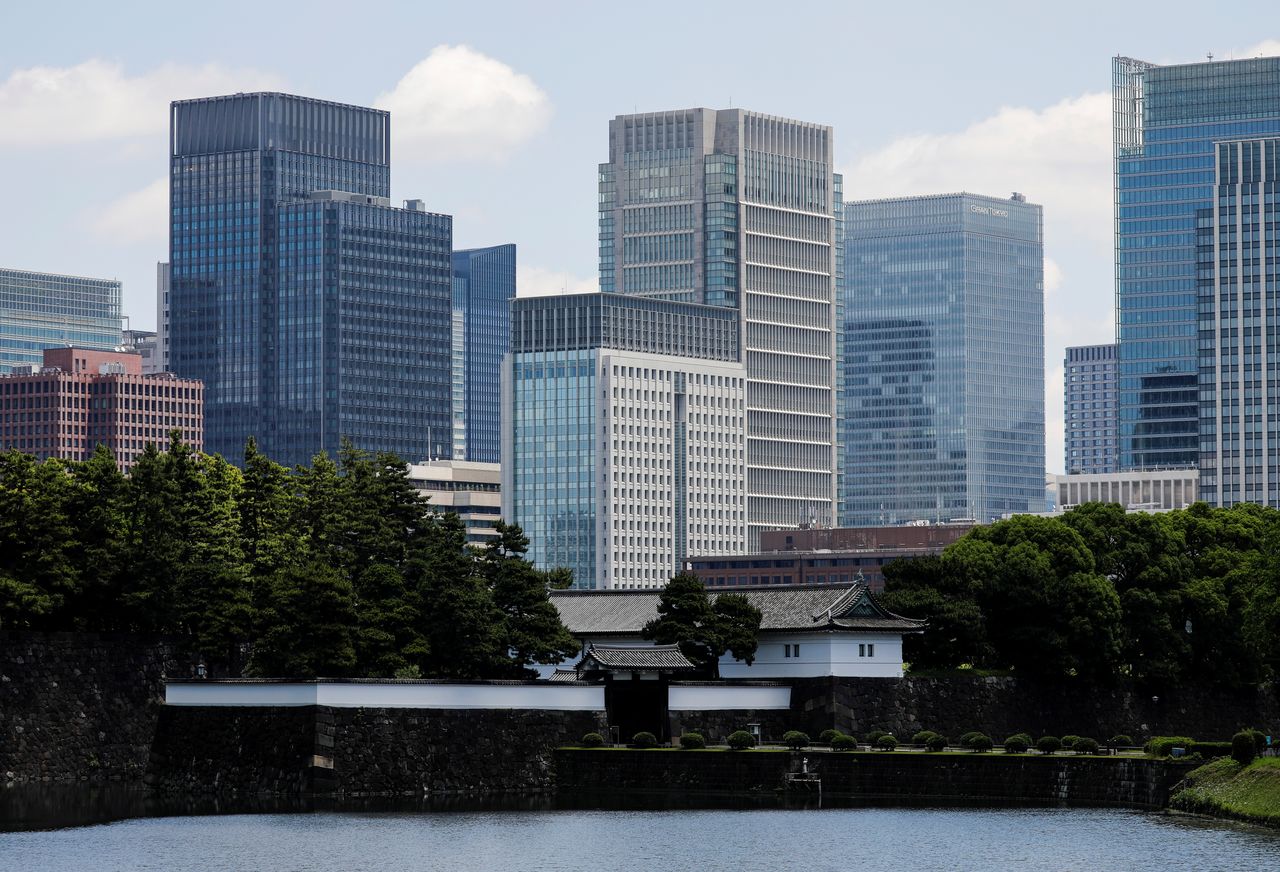 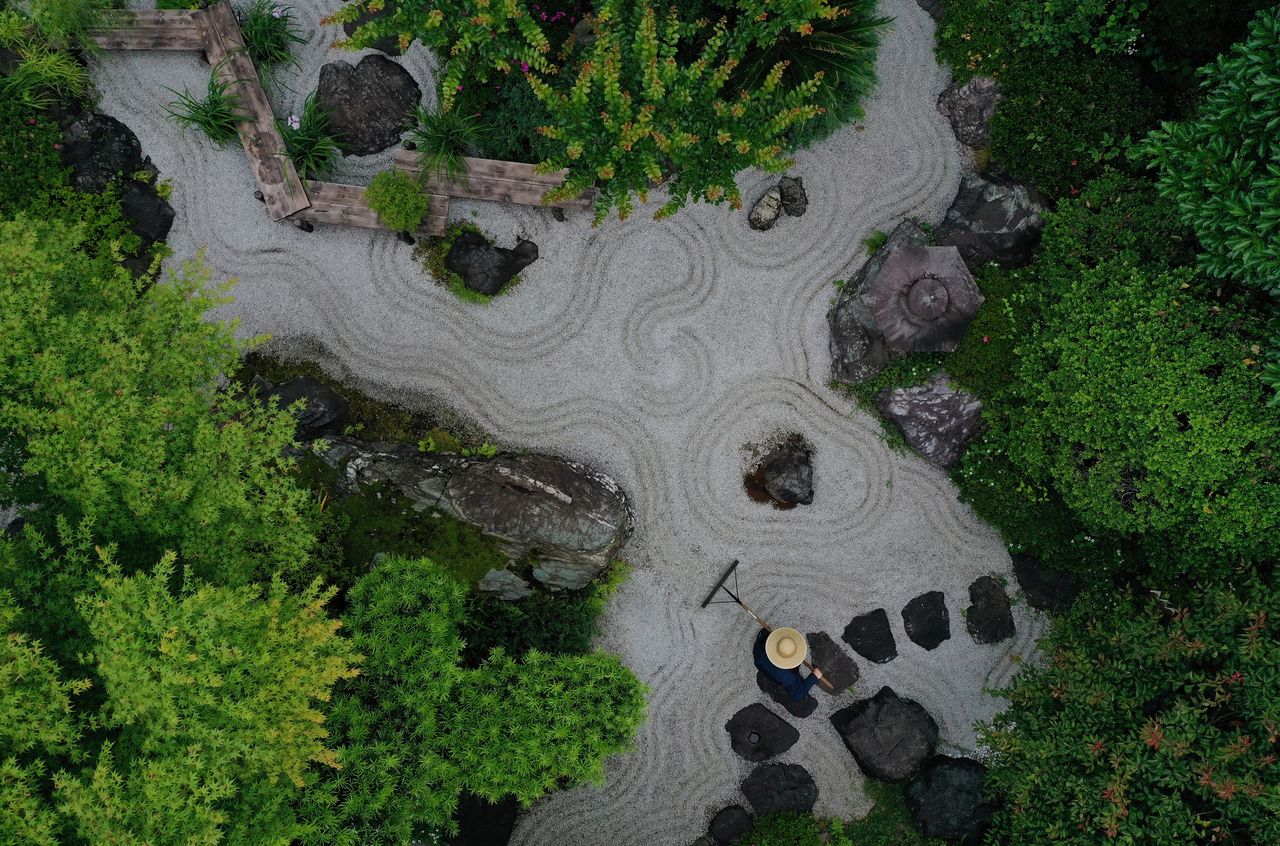 A gardener makes wave-shaped patterns, known as 'samon', at Karesansui, a traditional Japanese Dry Landscape, at Takao Komagino Garden in Hachioji, on the outskirts of Tokyo, Japan, June 7, 2021. Picture taken with a drone. REUTERS/Kim Kyung-Hoon 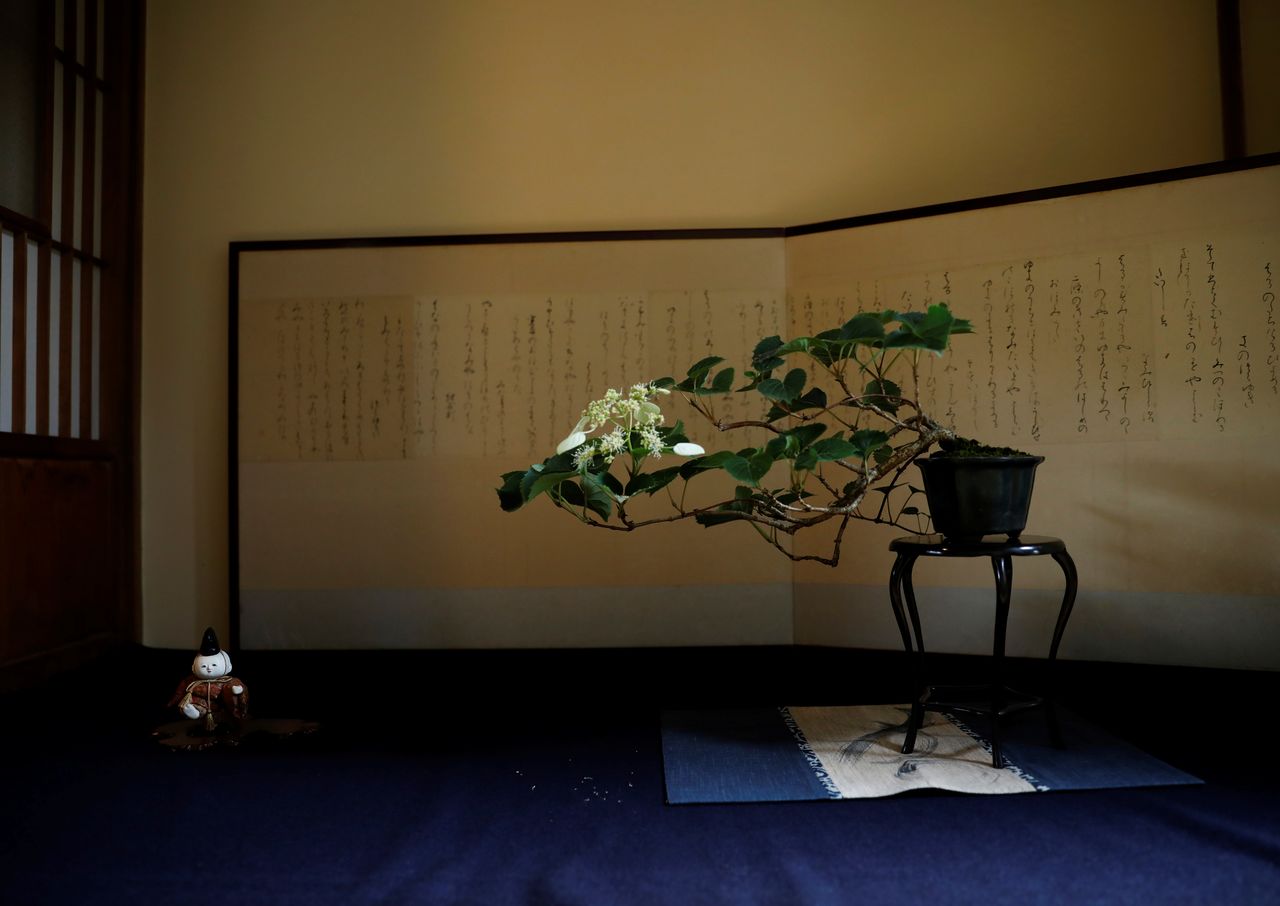 A bonsai tree is displayed near a traditional doll and a folding screen at Takao Komagino Garden in Hachioji, Tokyo, Japan, June 7, 2021. REUTERS/Kim Kyung-Hoon 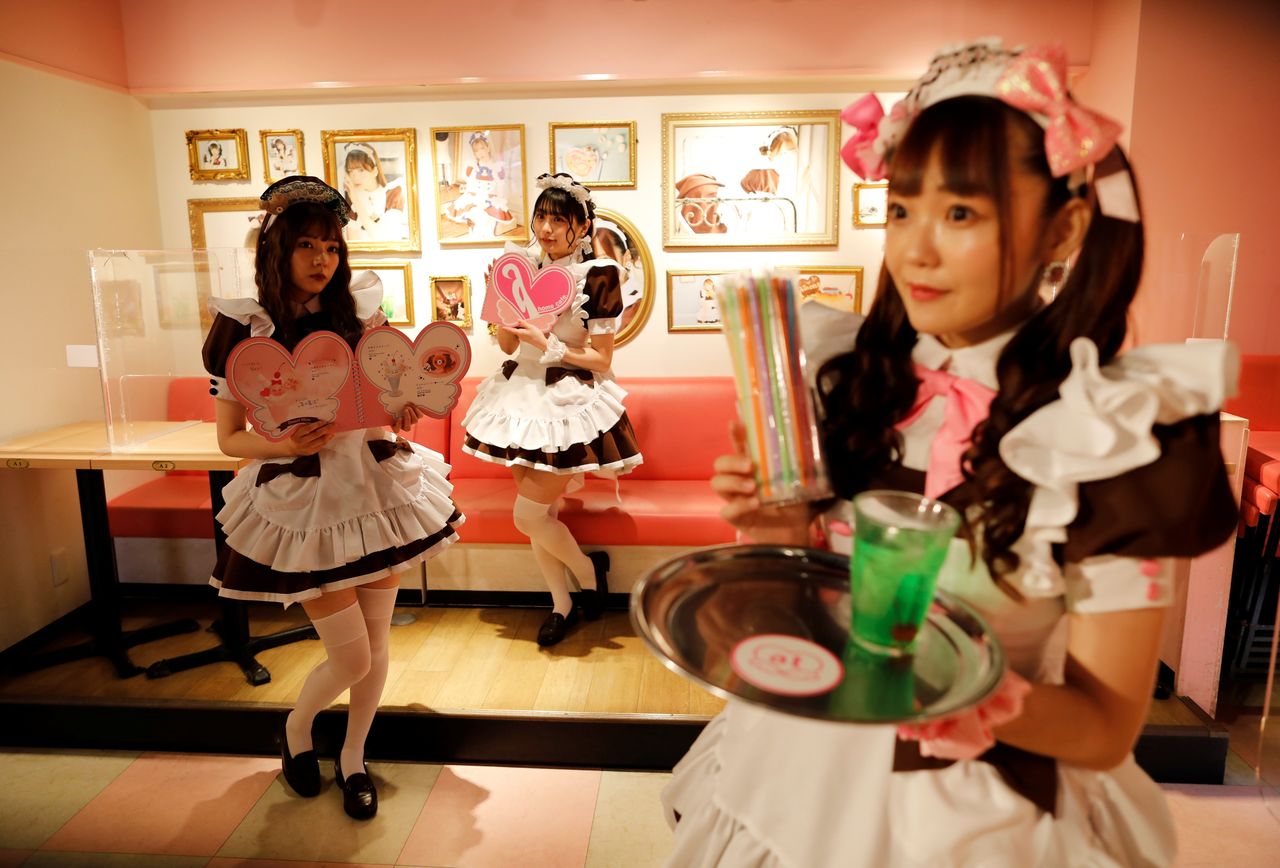 Cast members Hitomi, Kashima and Chia-can, greet guests at 'At-home Cafe', a maid cafe which is a subset of cosplay restaurants, in the Akihabara district, in Tokyo, Japan, June 8, 2021. REUTERS/Issei Kato 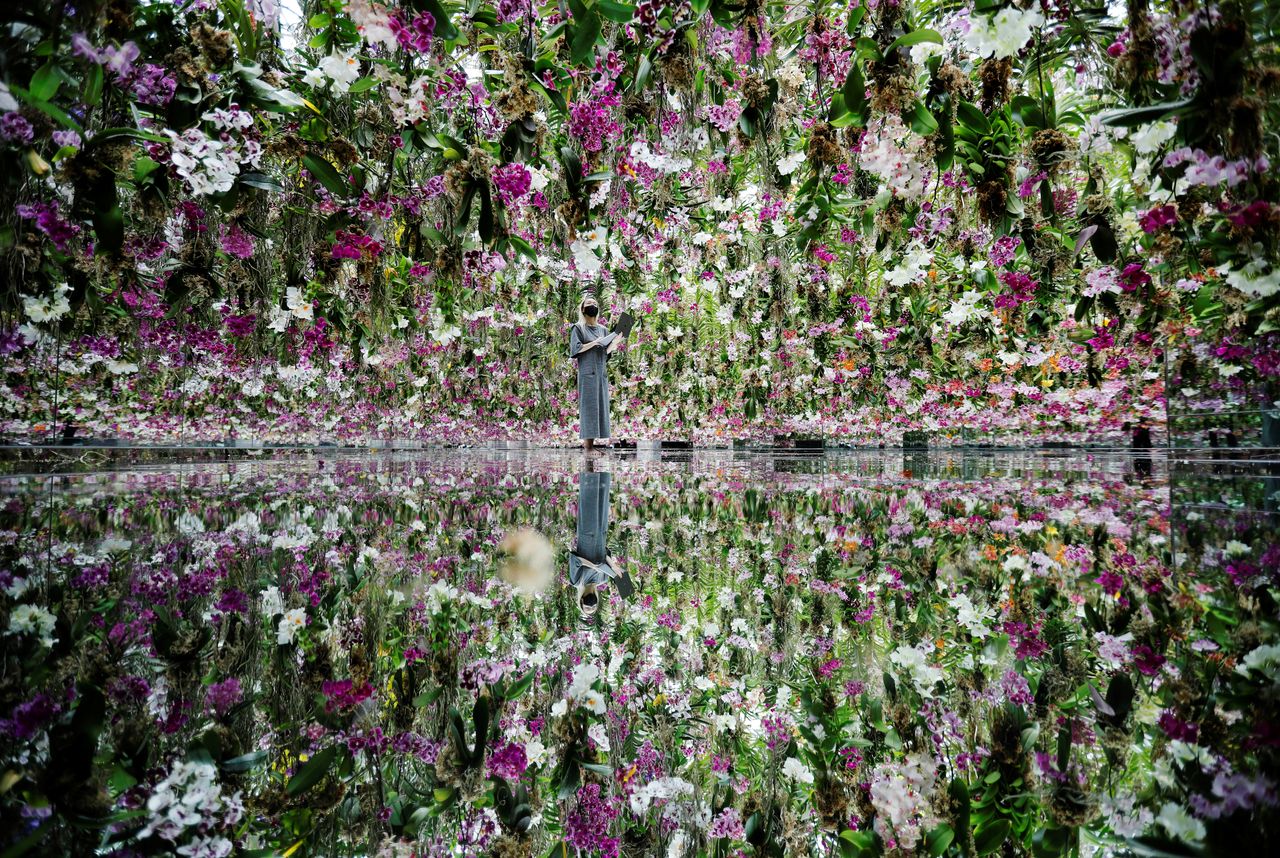 A teamLab staff member works inside the "Floating Flower Garden", which consists of a three-dimensional mass of flowers, at teamLab Planets in Tokyo, Japan, June 3, 2021. REUTERS/Kim Kyung-Hoon 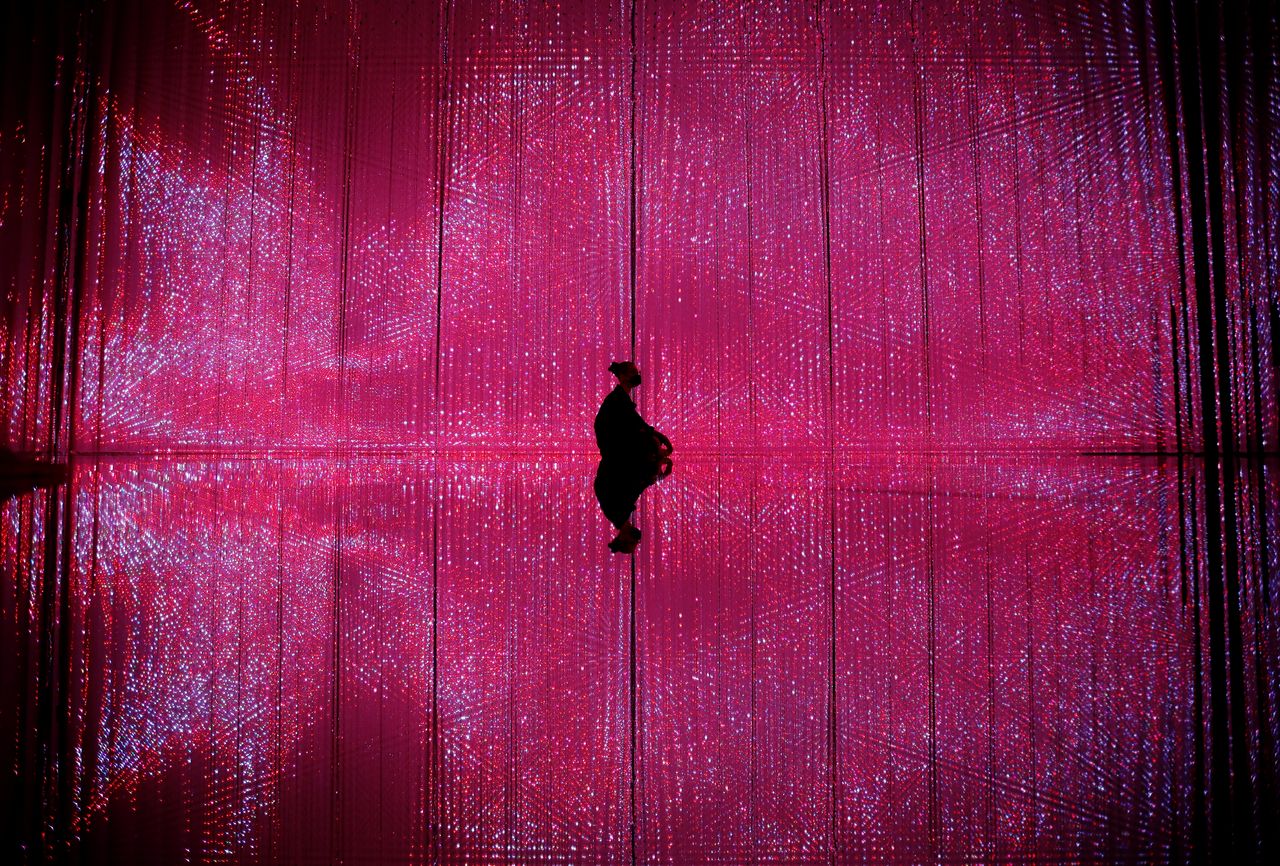 A teamLab staff member poses for a photograph as he sits inside a digital artwork at teamLab Planets in Tokyo, Japan, June 3, 2021. REUTERS/Kim Kyung-Hoon 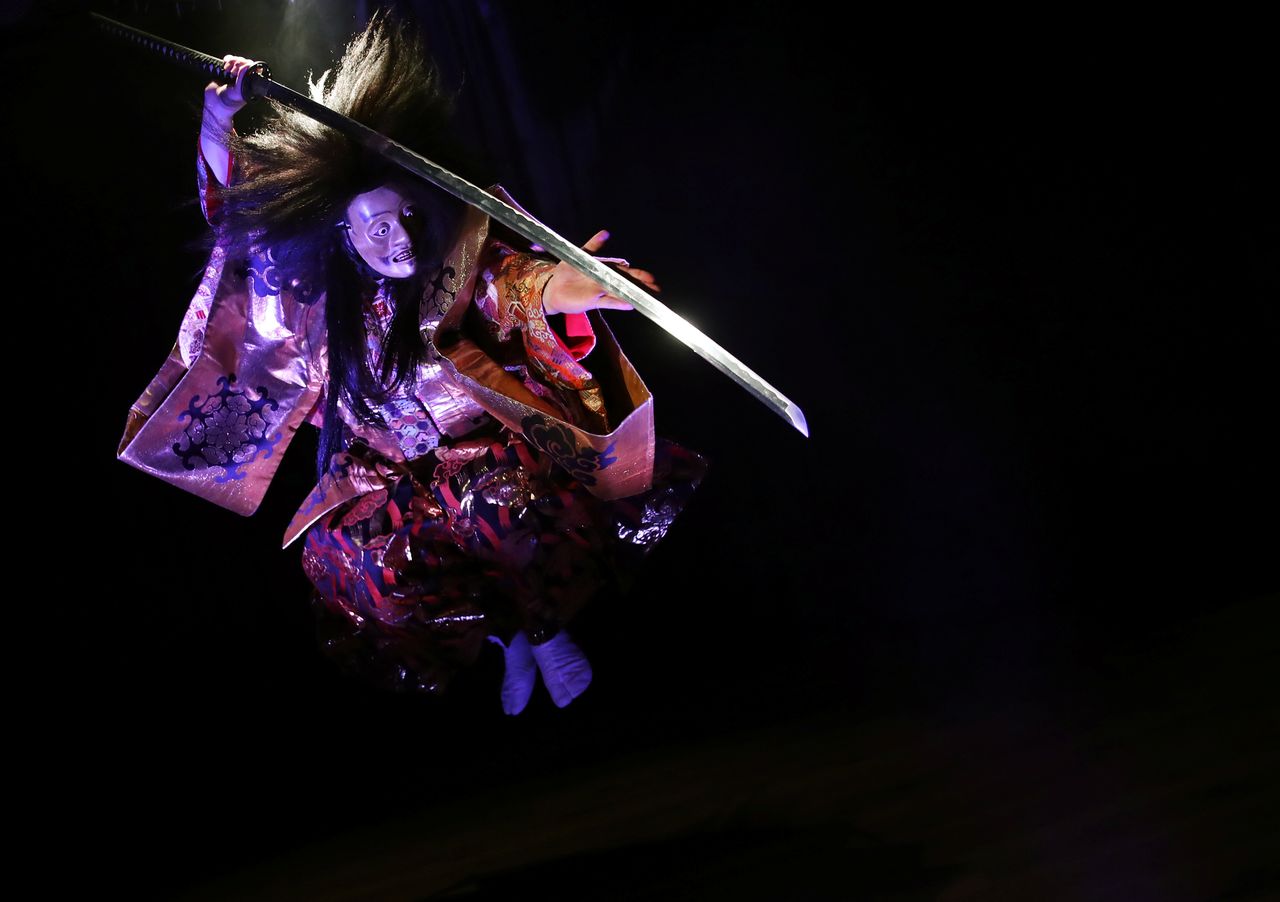 Koshiro Minamoto, the founder of BUGAKU and a Samurai martial arts instructor, performs BUGAKU, a composite Samurai Art of Japanese traditional martial arts and the traditional Japanese performing art Noh, as he poses for a photo before a performance in Tokyo, Japan, April 3, 2021. REUTERS/Kim Kyung-Hoon 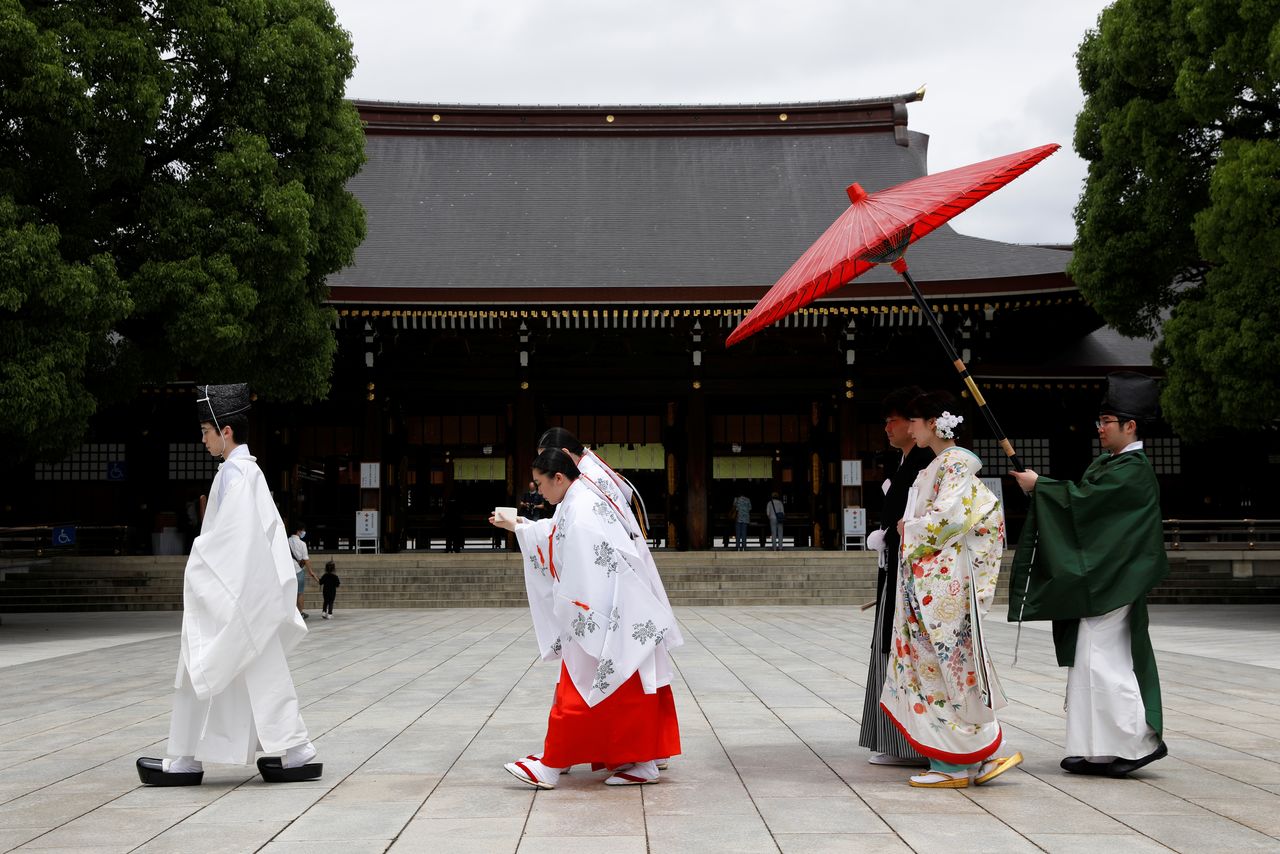 Shinto priests and shrine maidens guide a couple towards the wedding ceremony hall of Meijijingu shrine where the couple will get married in a traditional Japanese ceremony in Tokyo, Japan, June 5, 2021. REUTERS/Androniki Christodoulou 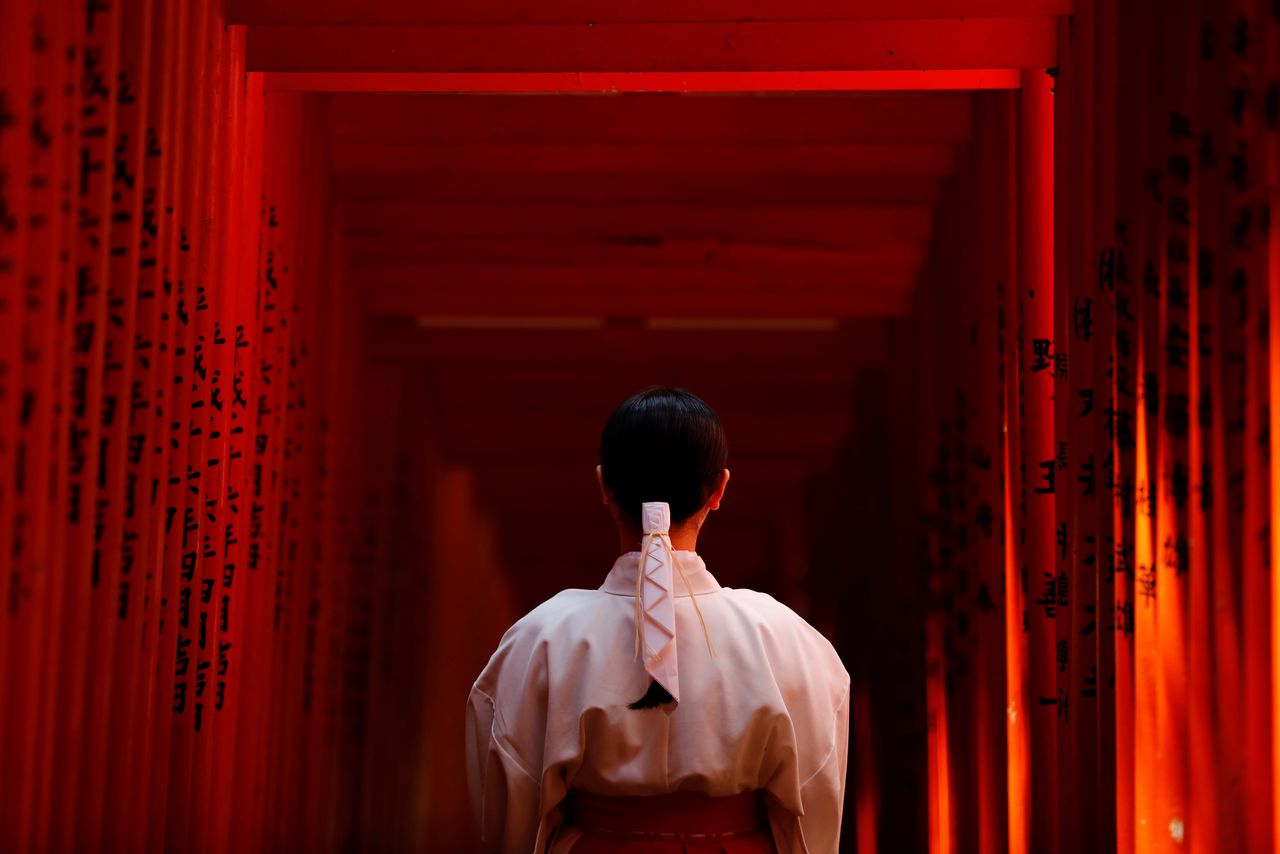 Shouko Totsuka, a Miko also known as a shrine maiden, poses for a photograph as she stands inside the tunnel of Red Torii Gate at the Hie-Jinja Shinto Shrine in Tokyo, Japan, June 1, 2021. REUTERS/Kim Kyung-Hoon 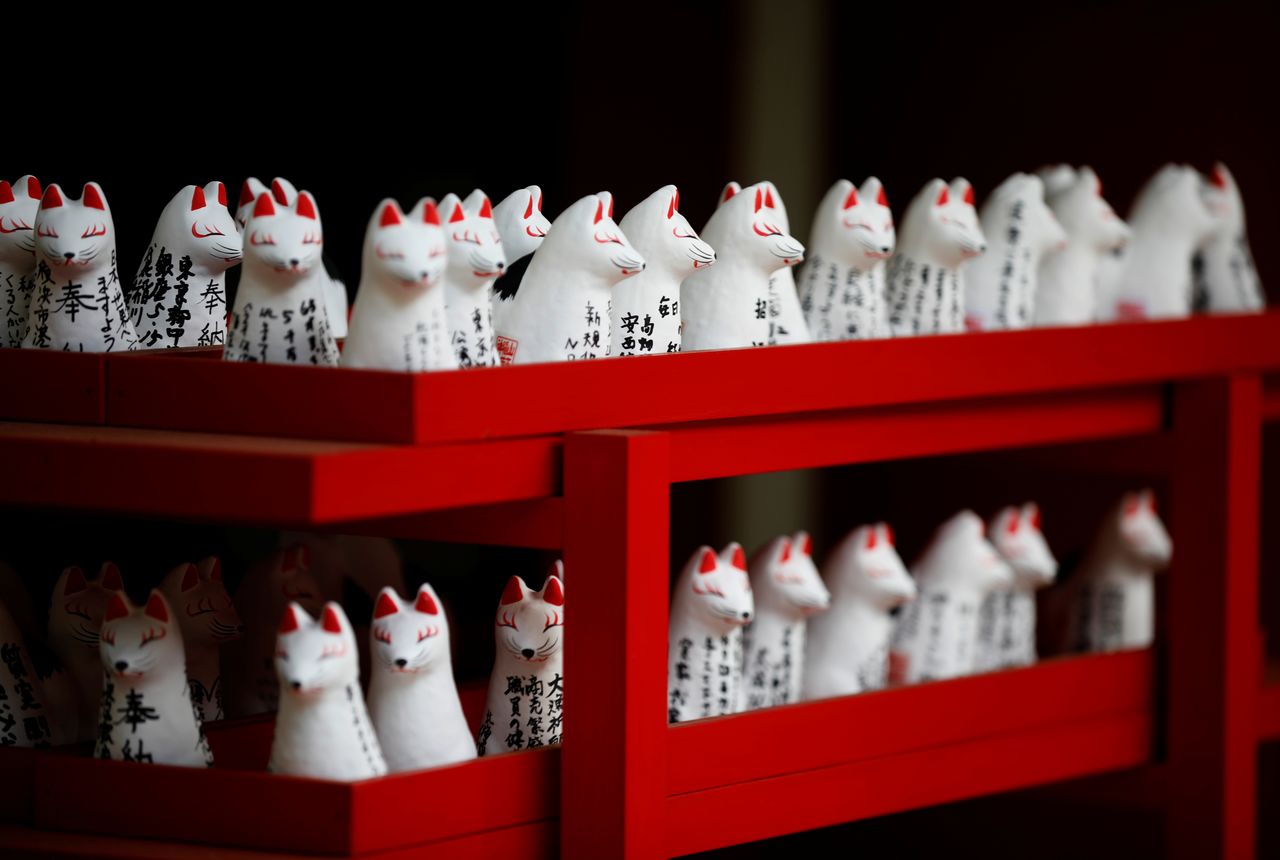 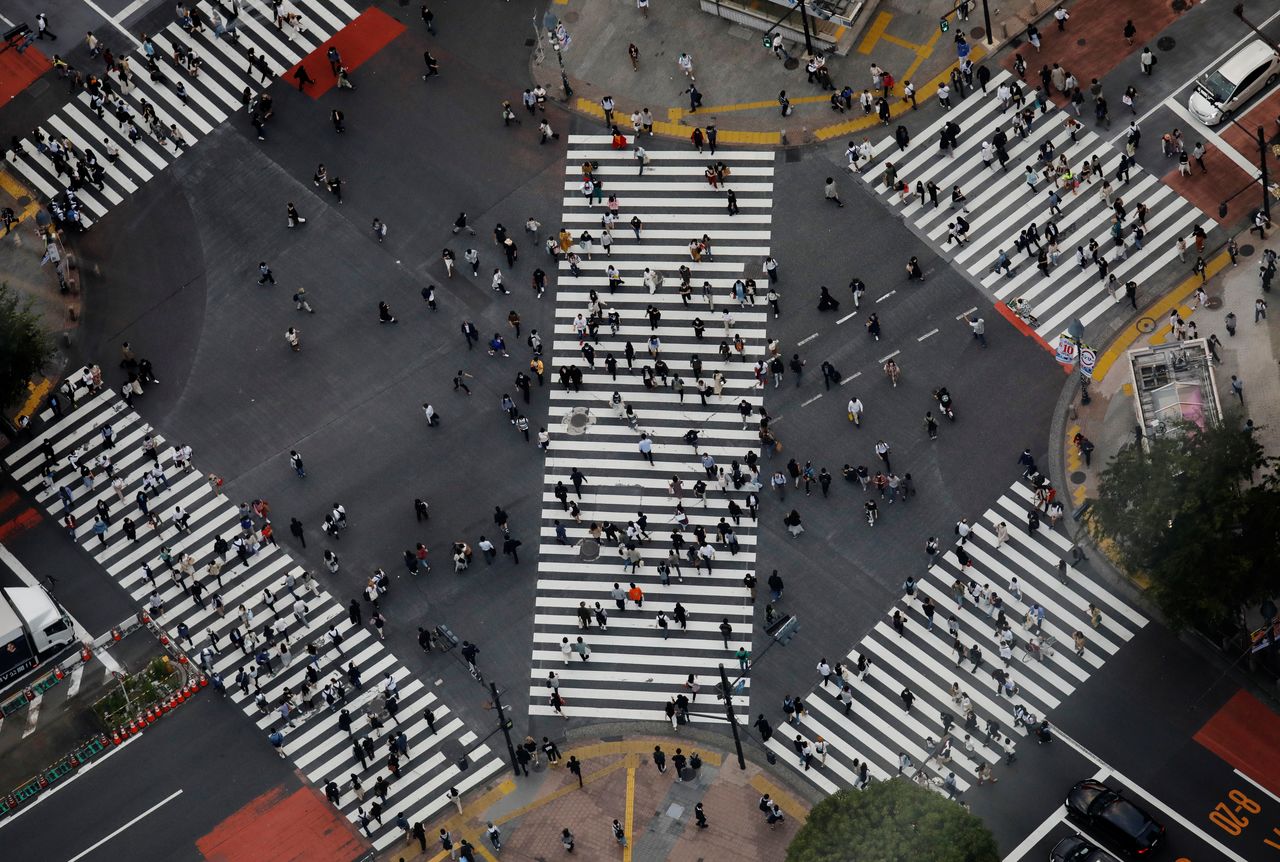 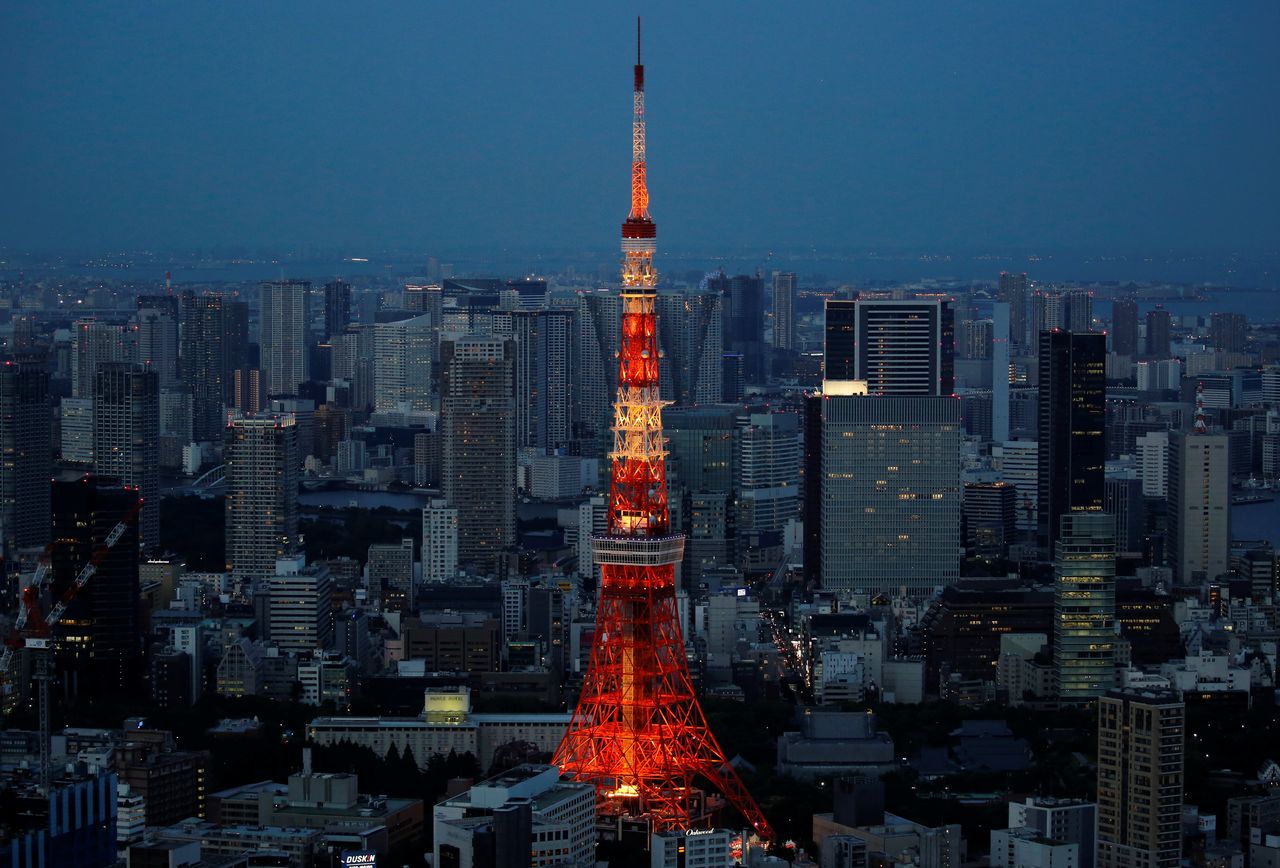 The Tokyo Tower stands as it is pictured from the Sky Deck of Roppongi Hills in Tokyo, Japan, June 2, 2021. REUTERS/Kim Kyung-Hoon 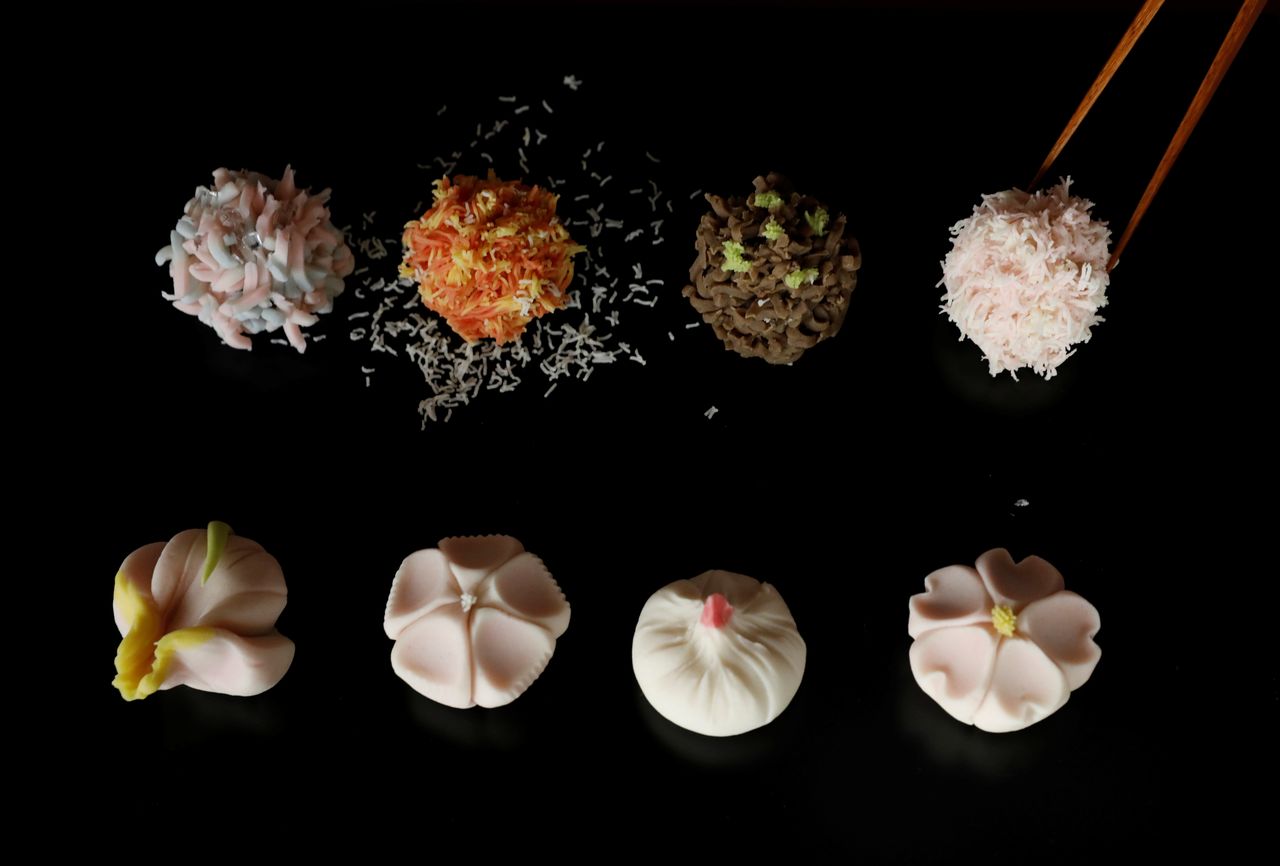