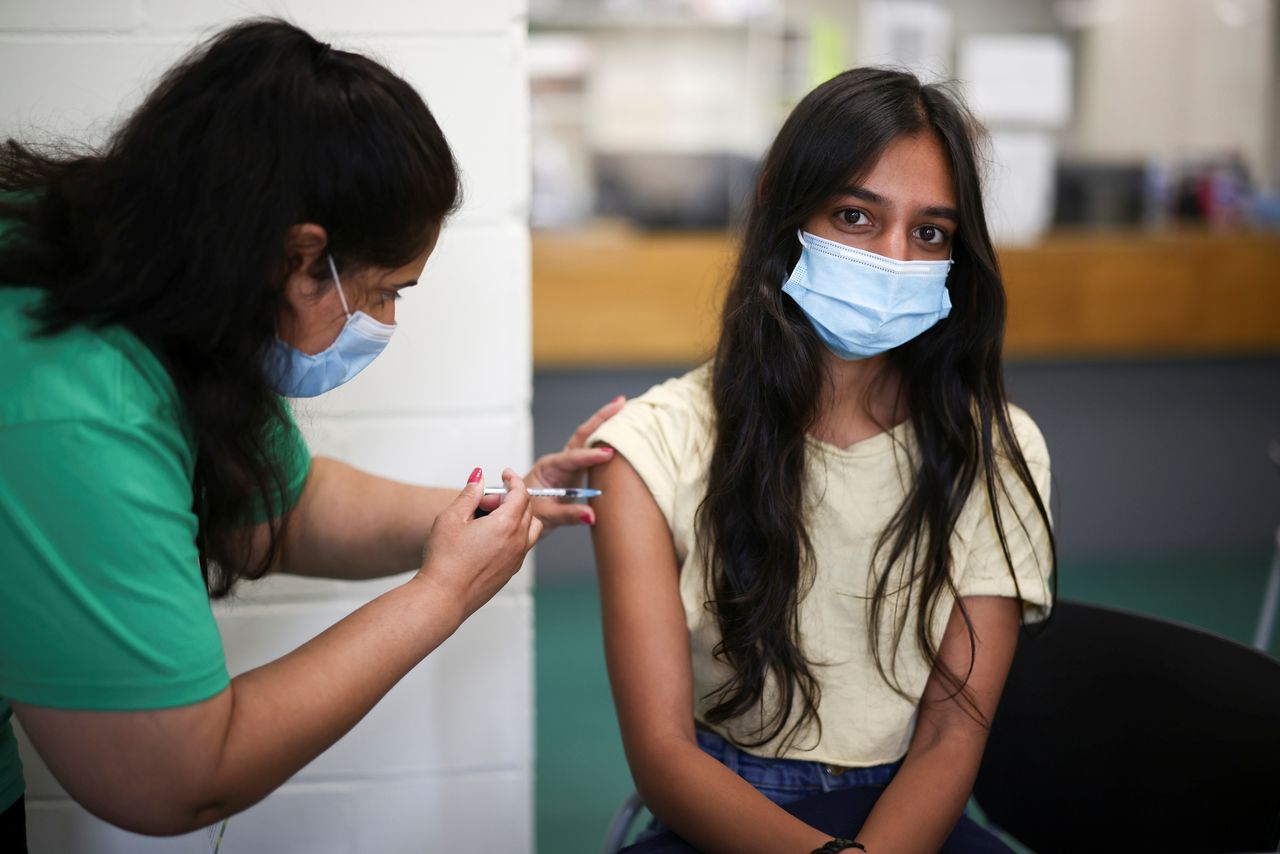 FILE PHOTO: A person receives a dose of the Pfizer BioNTech vaccine at a vaccination centre for those aged over 18 years old at the Belmont Health Centre in Harrow, amid the coronavirus disease (COVID-19) outbreak in London, Britain, June 6, 2021. REUTERS/Henry Nicholls

New Zealand raised the alert level in its capital of Wellington over exposure concerns after an Australian tourist tested positive for the virus upon returning to Sydney from a weekend visit to the neighbouring nation.

The latest virus cluster in Australia's most populous state of New South Wales has swelled to more than 30 in a week, prompting New Zealand to halt quarantine-free travel.

Alcohol, high-fives and talking loudly will be banned for the reduced numbers of Olympic ticket holders allowed into venues as organisers conceded a "sense of celebration" would be limited at a Games already postponed by a year.

Alcohol sales have been restricted in and around Tokyo after health officials warned drinking would encourage close contact and mingling in bars that could help spread the virus.

Japan's daily rate of vaccinations has reached a crucial milestone of 1 million, government data showed on Wednesday, as authorities scramble to recover lost time in inoculating the population.

Taiwan will extend its coronavirus curbs by two more weeks until July 12, as the situation has yet to reach a point where they can be relaxed, Health Minister Chen Shih-chung said on Wednesday.

Taiwan has been dealing with a rise in domestic infections since May after months of relative safety, leading the government to limit personal gatherings and close entertainment venues. Those restrictions were meant to end on June 28.

Chen announced 104 new domestic infections, up from up from 78 on Tuesday.

Direct flights from the southern city of Shenzhen to Beijing have been suspended until at least July 1, booking apps showed, ahead of celebrations for the Chinese Communist Party's founding in the capital on that date.

Of the cases, eight were recorded in Shenzhen, while 146 were reported in the provincial capital Guangzhou, though direct flights were still available to Beijing as of Wednesday.

Vaccines made by AstraZeneca and the Pfizer-BioNTech alliance remain broadly effective against Delta and Kappa variants of the novel coronavirus, according to a scientific study, underpinning a continued push to deliver the shots.

The study by Oxford University researchers, published in the journal Cell, investigated the ability of antibodies in the blood from people, who were vaccinated with the two-shot regimens, to neutralize the highly contagious Delta and Kappa variants.

The University of Oxford said on Wednesday it was testing anti-parasitic drug ivermectin as a possible treatment for COVID-19, as part of a British government-backed study that aims to aid recoveries in non-hospital settings.