SURFSIDE, Fla. (Reuters) -The death toll rose to five on Saturday at the site of the Florida building collapse where rescue workers methodically searched for more than 150 missing residents while firefighters made progress in battling a smoldering fire in the mountain of debris.

"Our top priority continues to be search and rescue and saving any lives that we can," Levine Cava said.

The search effort has revealed some human remains while three other victims were identified and their family members notified, she said.

A newly released 2018 report showed that an engineer found evidence of major structural damage beneath the pool deck and "concrete deterioration" in the underground parking garage of the 12-story oceanfront condominium, three years before it collapsed without warning on Thursday as most residents slept.

Officials said they still harbored hope that some of the 156 people unaccounted for might be found alive. Firefighters made progress on smoldering fire and smoke beneath the rubble, allowing rescuers to search with fewer limitations, officials said.

Aided by dogs, infrared scanning and heavy equipment, rescuers hope that air pockets that may have formed in the debris might keep people alive.

The engineer's 2018 report, released by town officials, was produced for the condominium board in preparation for a major repair project set to get underway this year.

It was not immediately clear whether the damage described in the report was in any way connected with the building's collapse around 1:30 a.m. ET (0530 GMT) on Thursday.

Cava said officials had not been aware of the report. Vice mayor Tina Paul called the structural issue described in the document "very alarming" in an email on Saturday morning.

Donna DiMaggio Berger, a lawyer who works with the condo association at Champlain Towers South, said the issues outlined in the 2018 engineering study were typical for older buildings in the area and did not alarm condo board members, all of whom lived there with their families.

“There’s no 'hair on fire' - nothing that says 'you need to evacuate that building immediately,'” she said in phone interview with Reuters.

She added that the board had taken out a $12 million line of credit to pay for the repairs and asked owners to pay $80,000 each. Work had started on replacing the roof ahead of hurricane season and the board was in the process of getting bids on the concrete work, but the pandemic slowed the project, she said.

Berger said one of the board members was still missing following the collapse.

The engineer, Frank Morabito, warned that the waterproofing installed below the pool deck had failed due to a major error in design.

In addition, Morabito said concrete columns, beams and walls in the garage were showing "abundant cracking," including areas underneath the pool with "exposed, deteriorating rebar."

Morabito's firm submitted an 84-page document to the town in April detailing a "40-year building repair and restoration" plan for the Champlain Towers South condominium, which was built in 1981.

The condominium was preparing to go through recertification this year, a safety requirement for buildings 40 years of age in Florida.

The mayor said the county will audit all buildings more than 40 years old within the next 30 days to ensure they have all been recertified. Governor Ron DeSantis said officials were weighing whether to evacuate the condominium's sister building, which was constructed at the same time by the same developer.

Satellite data from the 1990s showed the building was sinking between 1 and 3 millimeters per year, while surrounding buildings were stable, according to Florida International University professor Shimon Wdowinski.

He said the data could suggest a structural compromise within the building, though it could also have signaled the building was settling into the soil.

While local officials provided aid and comfort to resident families, such as hotel rooms and food, search-and-rescue specialists worked the disaster site on a rotation, with a limited number allowed at any one time to prevent further collapse.

Teams from Mexico and Israel arrived to help relieve the locally based crews, many of whom have also traveled to disaster sites around the world.

The disaster occurred early on Thursday morning, when a large section of the 40-year-old building crumbled to the ground https://graphics.reuters.com/MIAMI-BUILDING/nmovaxnykpa/miami-building-satellite.jpg.

Video captured by a security camera showed an entire side of the building suddenly folding in two sections, one after the other, throwing up clouds of dust.

The building had more than 130 units, about 80 of which were occupied, officials said. Roughly half appear to have collapsed. 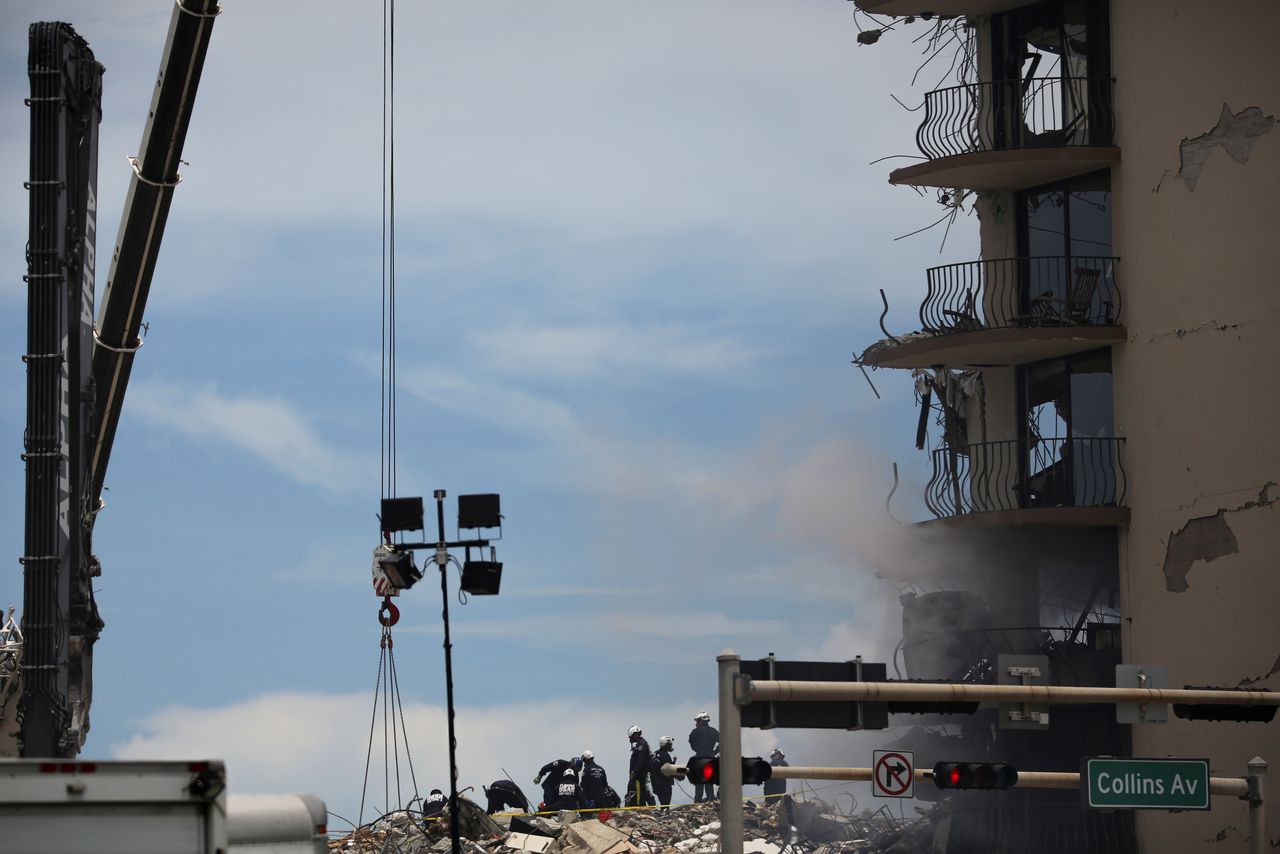 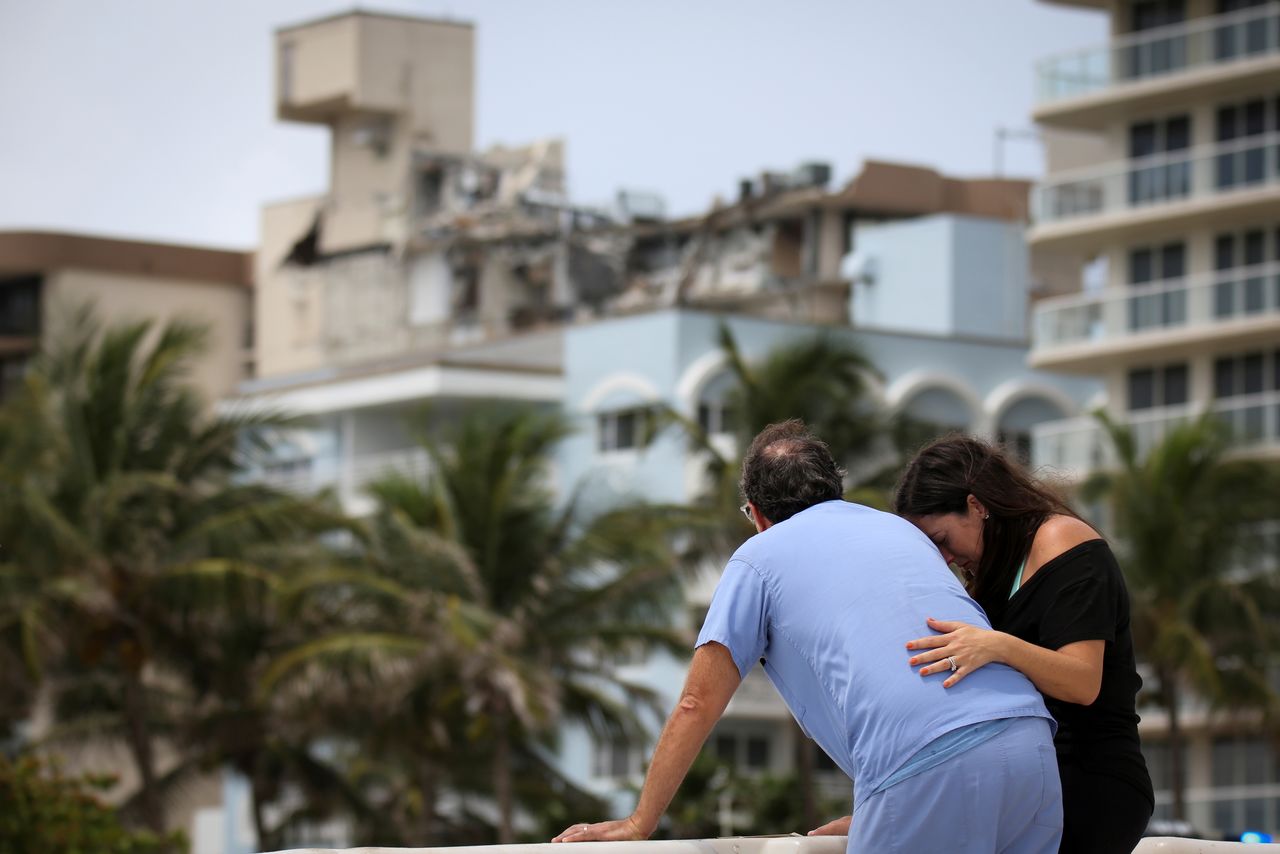 A couple at the beach reacts near the partially collapsed residential building as the emergency crews continue search and rescue operations for survivors, in Surfside, near Miami Beach, Florida, U.S. June 26, 2021. REUTERS/Marco Bello 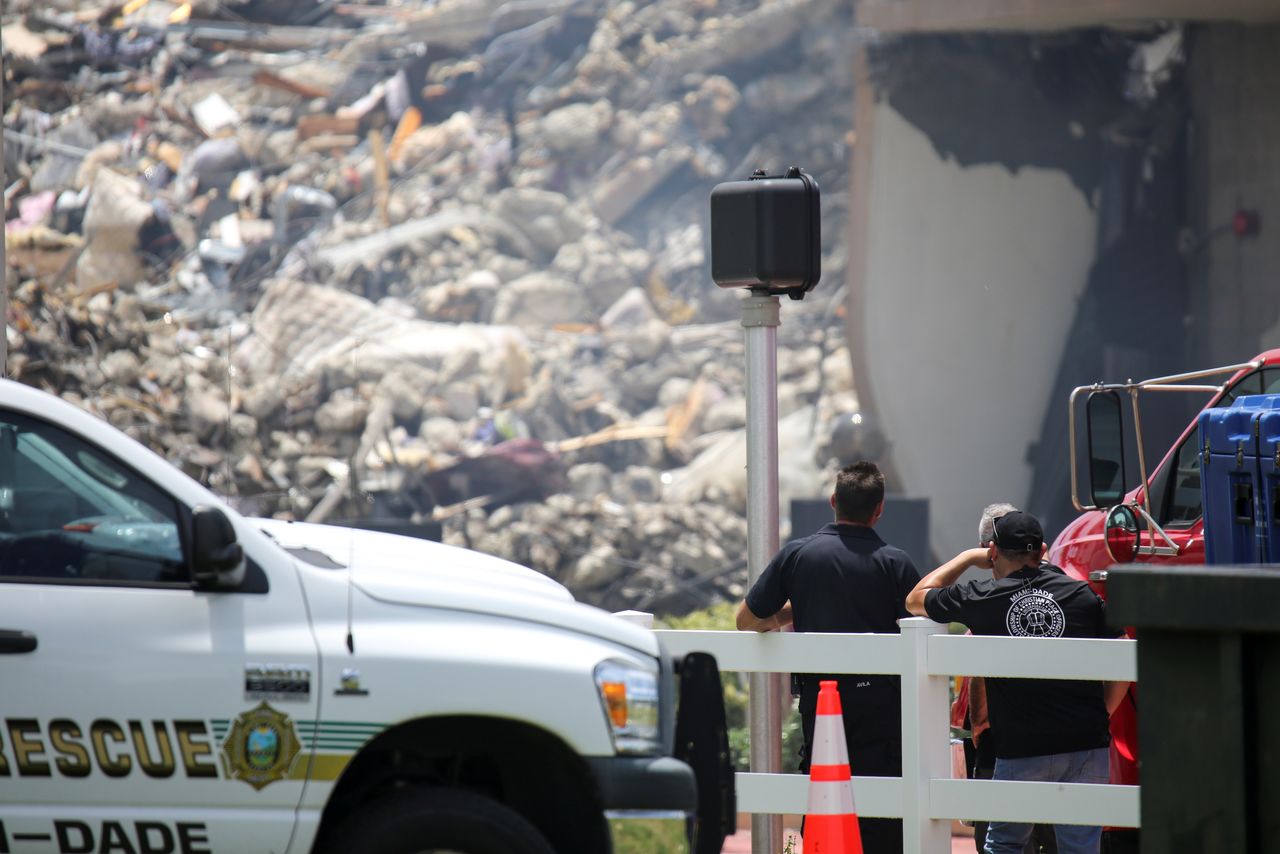 Rescue workers look at the debris of a partially collapsed residential building as the emergency crews continue search and rescue operations for survivors, in Surfside, near Miami Beach, Florida, U.S. June 26, 2021. REUTERS/Marco Bello 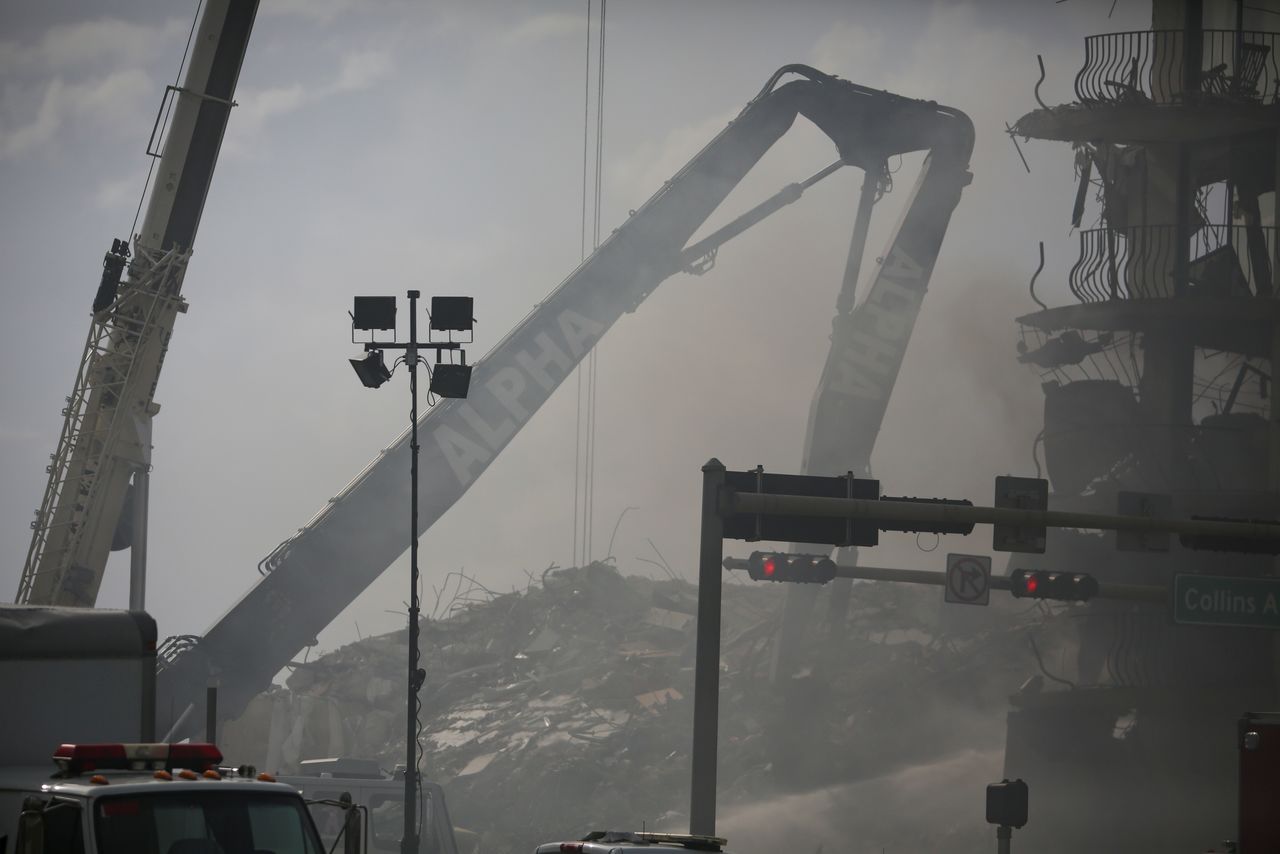 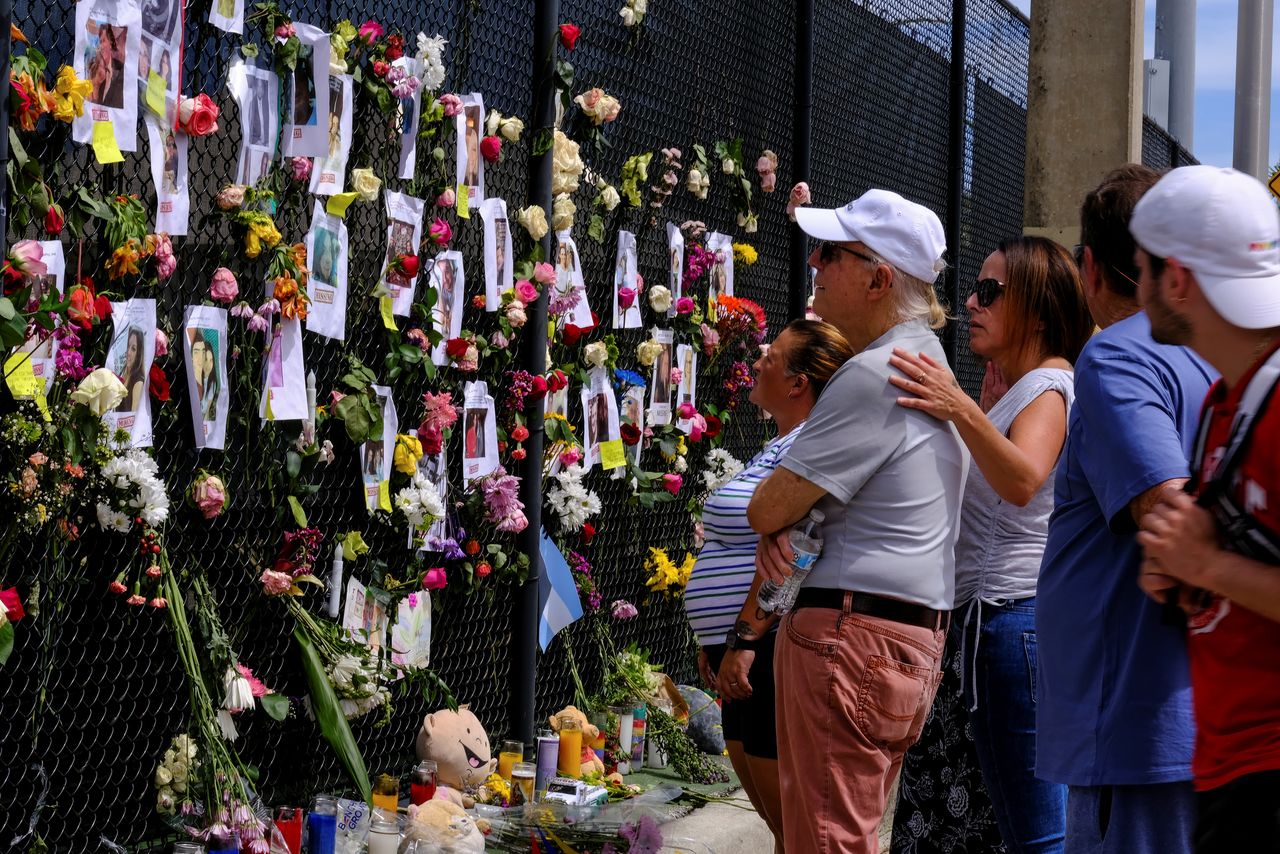 People mourn at the memorial site created by neighbors in front of the partially collapsed building where the rescue personnel continue their search for victims, in Surfside near Miami Beach, Florida, U.S., June 26, 2021. REUTERS/Maria Alejandra Cardona