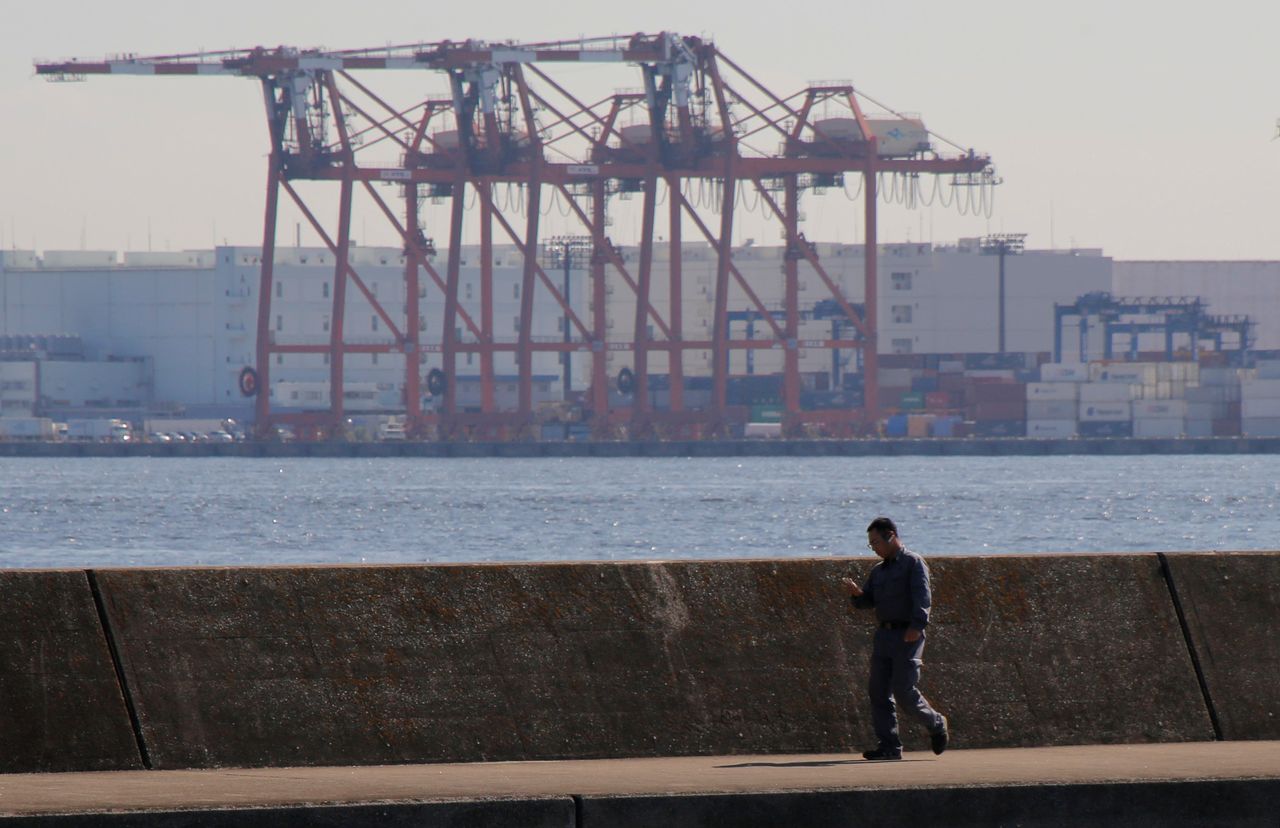 FILE PHOTO: A man walks in front of containers and cranes at an industrial port in Tokyo, Japan September 29, 2017. REUTERS/Toru Hanai

Service-sector sentiment also turned positive for the first time in five quarters, the Bank of Japan's (BOJ) "Tankan" survey showed, indicating that the economic recovery was broadening even as Japan struggles to contain a fresh wave of coronavirus infections.

Companies expect to increase capital expenditure in the year that began in April as profit recovers from last year's slump, offering hope among policymakers who project growth to accelerate in the latter half of this year.

"The further rebound in the Q2 Tankan supports our view that the economy's disappointing start to the year won't prevent vaccines driving a strong rebound in the second half of the year," said Tom Learmouth, Japan economist at Capital Economics.

The headline index for big manufacturers' sentiment jumped to plus 14 in June from plus 5 in March, improving for the fourth consecutive quarter and hitting the highest level since December 2018, the survey showed on Thursday.

Non-manufacturers' mood also improved to plus 1 from minus 1 in the previous survey, to reach its highest index reading since March 2020, as goods distribution and leisure industries saw activity gradually resume after disruption caused by COVID-19.

"Exports and output continue to improve, which is helping sentiment improve for most manufacturing sectors. The auto sector, however, saw sentiment worsen due to shortages in semiconductor chips," a BOJ official said at a briefing.

Big companies expect capital expenditure to rise 9.6% in the current fiscal year ending in March, after a 8.3% drop in the previous year, the survey showed.

Some analysts, however, have questioned how quickly the economy can sustainably emerge from the pandemic with a resurgence in infections and slow a vaccination programme clouding the outlook for consumption.

Soaring raw material costs and chip shortages were also fanning caution among some manufacturers, such as those of lumber goods and automobiles, the survey showed.

"Industries such as restaurants and hotels showed signs of improvement probably because people are getting used to the coronavirus, though department stores appear to feel more of a pain from COVID curbs," said Hiroshi Shiraishi, senior economist at BNP Paribas Securities.

"The pace of recovery will largely depend on developments of the coronavirus and vaccine rollout from now on," he said.

Japan's economy shrank an annualised 3.9% in the first quarter and likely grew only modestly in the April-June period as state-of-emergency curbs to prevent the spread of COVID-19 cooled consumption.

While the curbs have been lifted for most areas, many analysts expect consumption to remain a weak spot in Japan's export-driven recovery as slow vaccinations keep households from boosting spending on leisure and dining out.

The Tankan will be among factors the BOJ will scrutinise at its interest rate review on July 15-16, when it will produce fresh quarterly growth and inflation projections.

Tankan sentiment index readings are calculated by subtracting the percentage of respondents who say conditions are poor from those who say they are good. A positive reading means optimists outnumber pessimists.