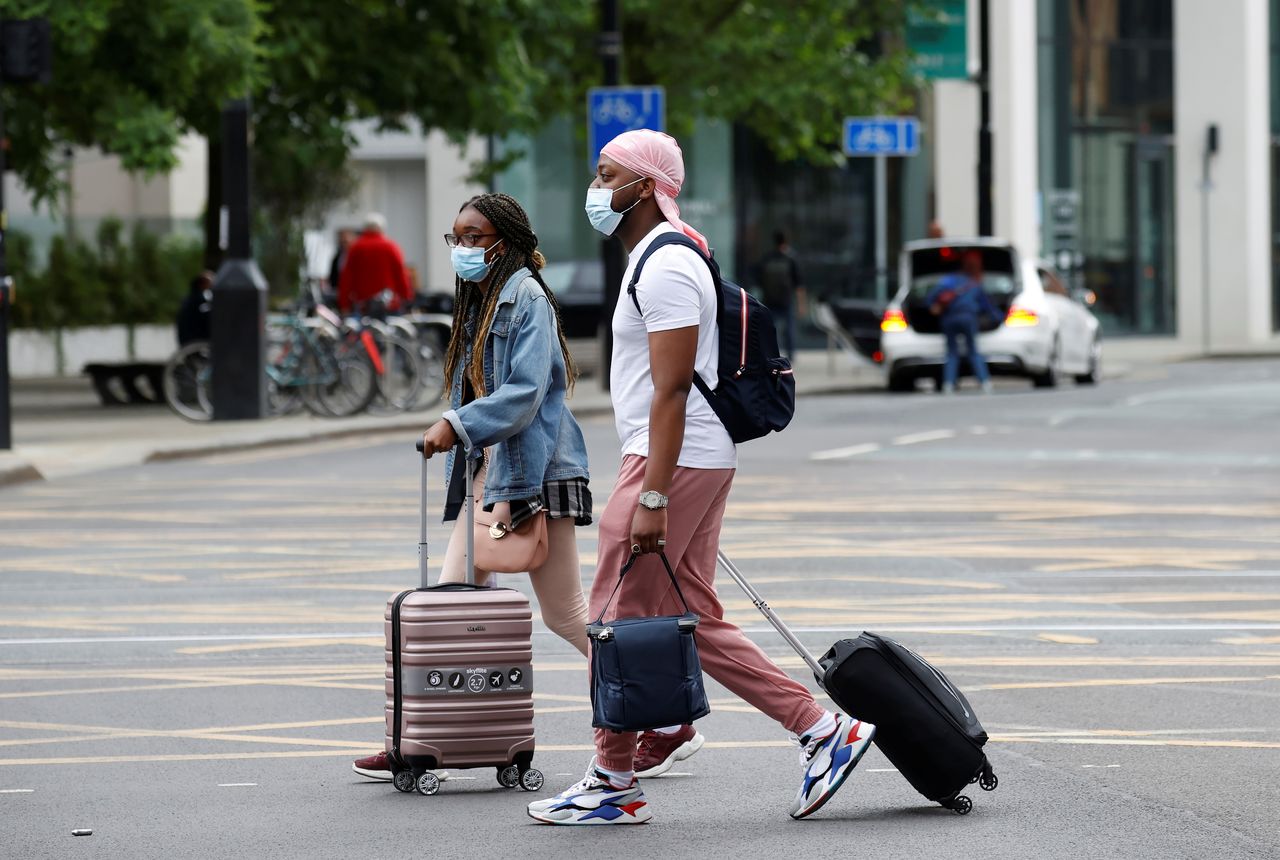 FILE PHOTO: People wear protective masks as they walk with suitcases through the city centre, amid the outbreak of the coronavirus disease (COVID-19) in Manchester, Britain, June 21, 2021. REUTERS/Phil Noble

WHO warns of third coronavirus wave in Europe

A 10-week decline in new infections across Europe has ended and a new wave is inevitable if citizens and lawmakers do not remain disciplined, the head of the WHO in Europe, Hans Kluge, told a news briefing on Thursday.

Germany expects the Delta variant to account for up to 80% of infections this month, meaning it could ease curbs on travel from countries such as Portugal and Britain, where the variant dominates, the German health minister said.

Britain is working with countries across the European Union to encourage them to accept its fully vaccinated travellers, the business minister said, as momentum builds for a fuller reopening of travel from the United Kingdom.

CureVac said its COVID-19 vaccine was 48% effective in the final analysis of its pivotal mass trial, only marginally better than the 47% reported two weeks ago.

The German biotech firm said efficacy, measured by preventing symptomatic disease, was slightly better at 53% when excluding trial participants older than 60, an age group that is by far the most severely affected.

Indian drugmaker Zydus Cadila said it had applied for emergency use approval of its three-dose vaccine that showed efficacy of 66.6% in an interim study and could become the second home-grown shot if regulators consent.

Health clinics in Moscow will begin offering booster vaccine shots on Thursday, the city's mayor said, as Russian officials scramble to contain a surge in cases blamed on the Delta variant.

The health ministry issued new regulations for the national inoculation programme on Wednesday, recommending that clinics begin administering booster doses to those vaccinated six months ago or more, making Russia one of the first countries globally to begin re-vaccination.

Indonesia to bring in emergency measures

President Joko Widodo said Indonesia would bring in emergency measures until July 20, aiming to contain an exponential spike in cases that has strained the medical system.

The world's fourth most populous nation has seen a near vertical climb in infections in recent weeks, prompting health experts to warn that without tighter measures its outbreak could be as bad as India's devastating second wave.

Japan is likely to extend by two weeks or more its virus containment measures in the greater Tokyo area, four government sources said, as infections creep up less than a month before the Summer Olympics start.

Japan's capital and three neighbouring prefectures are among areas under a 'quasi' state of emergency set to run through July 11, but a recent uptick in infections has officials leaning towards keeping curbs in place.

Hundreds of vaccinated foreign tourists arrived on the Thai resort island of Phuket, the first visitors to its beaches and golf courses under a pilot programme devised to revive a tourism industry pulverised by the pandemic.

The "Phuket sandbox" plan frees vaccinated foreign tourists from spending any time in quarantine, letting them travel round the island freely.