BARCELONA (Reuters) - Its biggest act may have been beamed in on a screen, but a smaller, quieter 'hybrid' Mobile World Congress (MWC) has given others hope that in-person events can succeed in a pandemic.

For those who did make it to Barcelona, there were no boozy parties, with far fewer such gatherings than in previous years and the only alcohol on offer reserved for hand sanitising.

The must-haves at this week's MWC were a negative COVID-19 test, an FFP2 face mask and a digital contact-tracing badge for the 30,000 or so who filed through its testing stations and followed a one-way traffic system to reduce infection risk.

At every booth an army of volunteers religiously scanned contact tracing passes, while others were on hand at every corner reminding visitors who were not maintaining enough distance or whose face mask had slipped to follow the rules.

The events industry, which includes conferences and performances and was valued at $1.14 trillion in 2019 by Allied Market Research, was stopped in its tracks by the pandemic.

While some business shifted online, industry participants have been working on ways to get back to normal.

One show waiting to see whether MWC succeeded in minimising the spread of COVID-19 is Europe's biggest tech conference, Web Summit, which is pushing ahead with preparations for an in-person show in November in Lisbon.

Both the limitations and appeal of a hybrid model were highlighted by Tesla CEO Elon Musk's keynote speech on his $30 billion Starlink venture, which despite being delivered by webcam generated MWC's biggest audience buzz.

Its organisers had billed the Barcelona show as a step towards normality ahead of its next edition in February 2022 and most attendees lauded its return despite its reduced scale and the absence of household names such as Ericsson, Sony and Nokia. "COVID-19 challenged us. We've had to develop new health and safety protocols and a hybrid platform, but we did it," said Mats Granryd, director general of telecoms industry association GSMA, which took big losses after cancelling last year's MWC.

The show still recorded an undisclosed number of positive cases.

"Individuals who tested positive were identified prior to entering the venue... we confirm they've been under the care health authorities and the situation remains under control," a GSMA spokeswoman said.

Catalonia's health department did not immediately respond to a request for comment. The regional top health official has warned this week of an uptick in infections, mainly among young people, tied to the spread of the Delta variant.

Although several big exhibitors such as Huawei cut their physical presence and overall footfall was less than a third of previous years, attendees in Barcelona welcomed being able to revive old relationships or make new ones.

"We've had interesting discussions, though they've had a different, graver tone this year. But the most important thing was to do it... to show that there is life after, or despite, COVID," Orange CEO Stephane Richard told Reuters.

STARTUP SPACE Another contrast was the hallways of MWC's three pavilions, compared to 10 in the Fira fair ground in 2019, emptied as the week progressed, leaving it mostly deserted by Wednesday night, when most exhibitors threw their wrap-up parties.

And the absence of some big names also shook up the pecking order of exhibitors, with the vacuum partly filled by smaller startups and hard-to-pigeonhole companies such as TelcoDR.

Its founder Danielle Royston scooped up Ericsson's exhibition stand and created one of the most-visited booths by booking U.S. rockers Bon Jovi and offering thirty-odd startups space to showcase their products.

By sharing a congested space in the MWC's startup arena, newcomers attracted more visitors than some of the big stands.

Lower booth and ticket prices also helped startups, Consuelo Naranjo, marketing director of Austria's Authentic Vision, said, adding: "We just had a meeting with a spokesperson of a small Italian village, whom we would not have met otherwise."

Even old hands such as Spain's Telefonica noticed the effect of a more diverse crowd.

"It's true that (MWC) lost that 'Wow!' factor - but the people who have come are much more networking-focused, and you can dedicate more time to startups, which is positive," Andres Escribano, director of Telefonica IoT & Big Data, told Reuters. 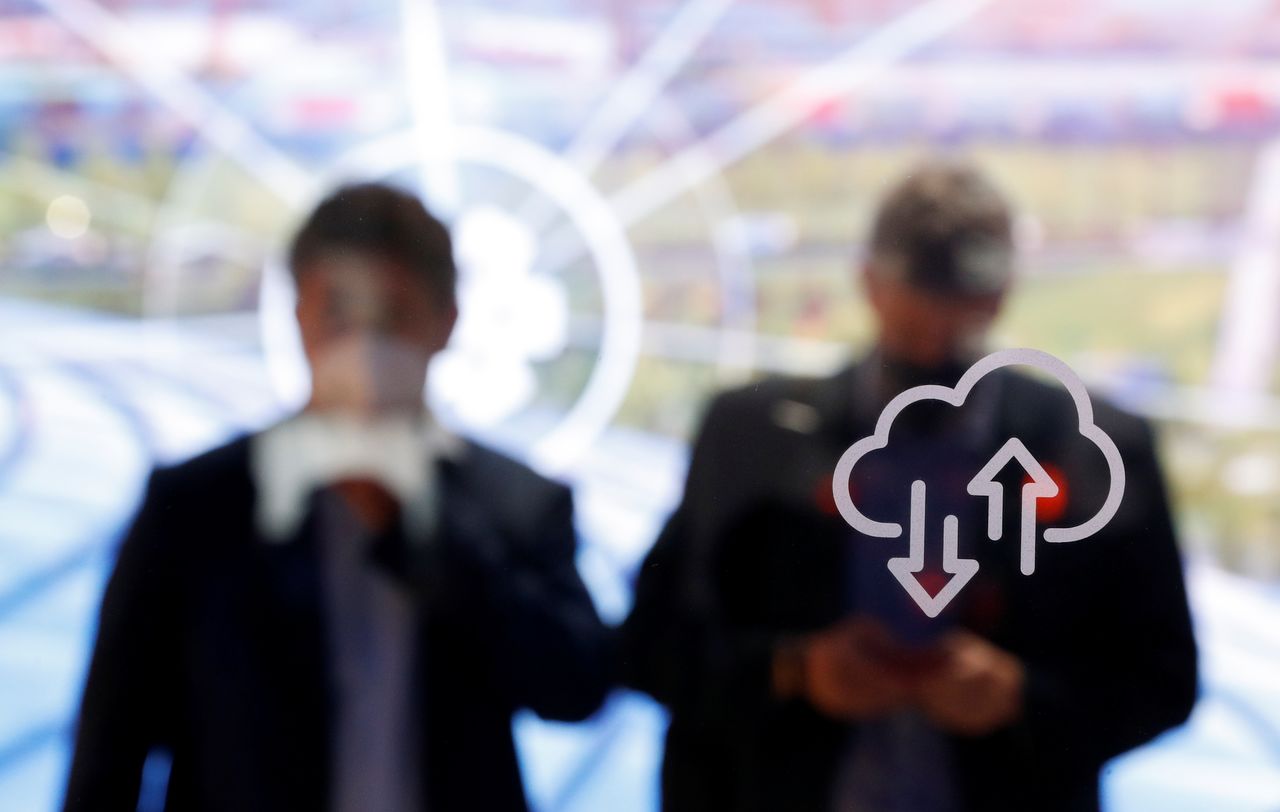 A cloud symbol is displayed on glass during the Mobile World Congress (MWC) in Barcelona, Spain, June 30, 2021. REUTERS/Albert Gea 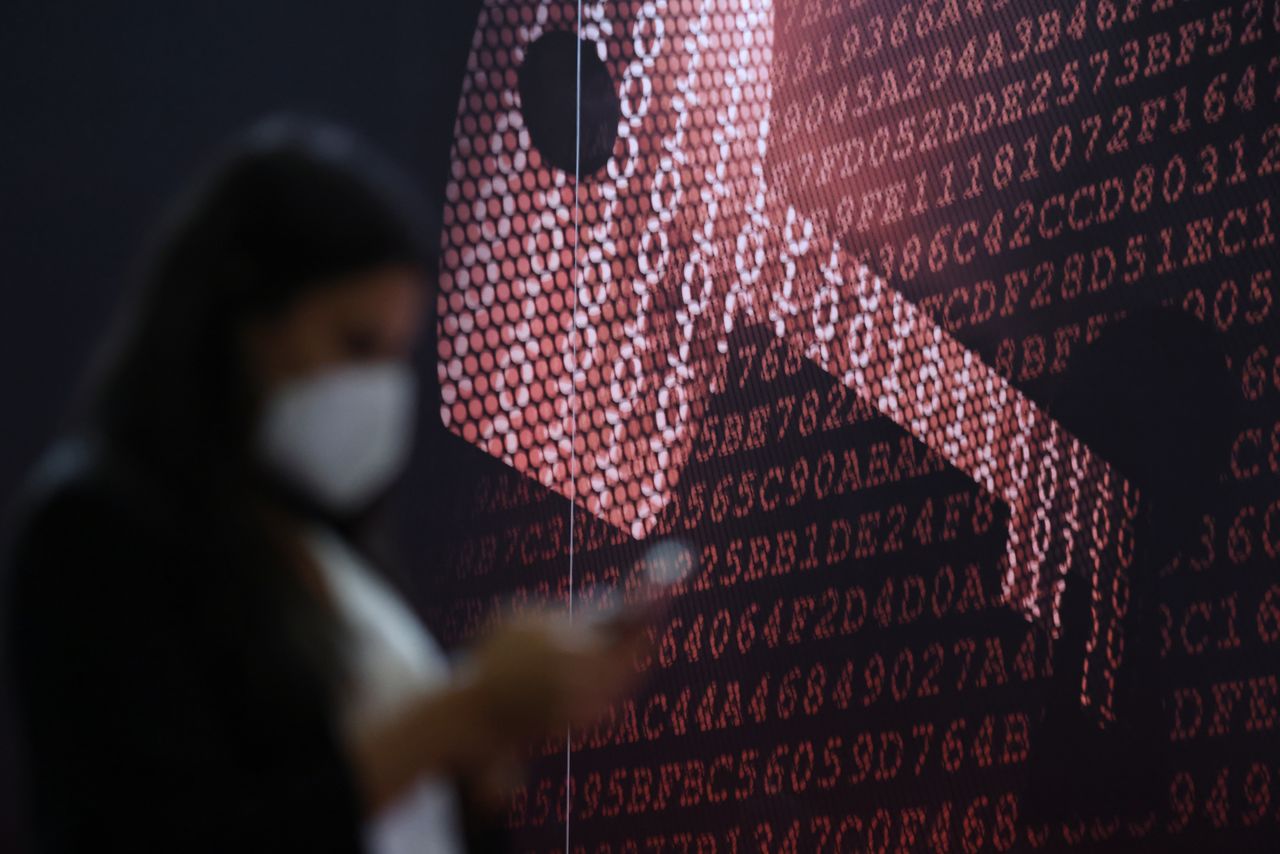 A person walks past a screen during the Mobile World Congress (MWC) in Barcelona, Spain, June 30, 2021. REUTERS/Nacho Doce 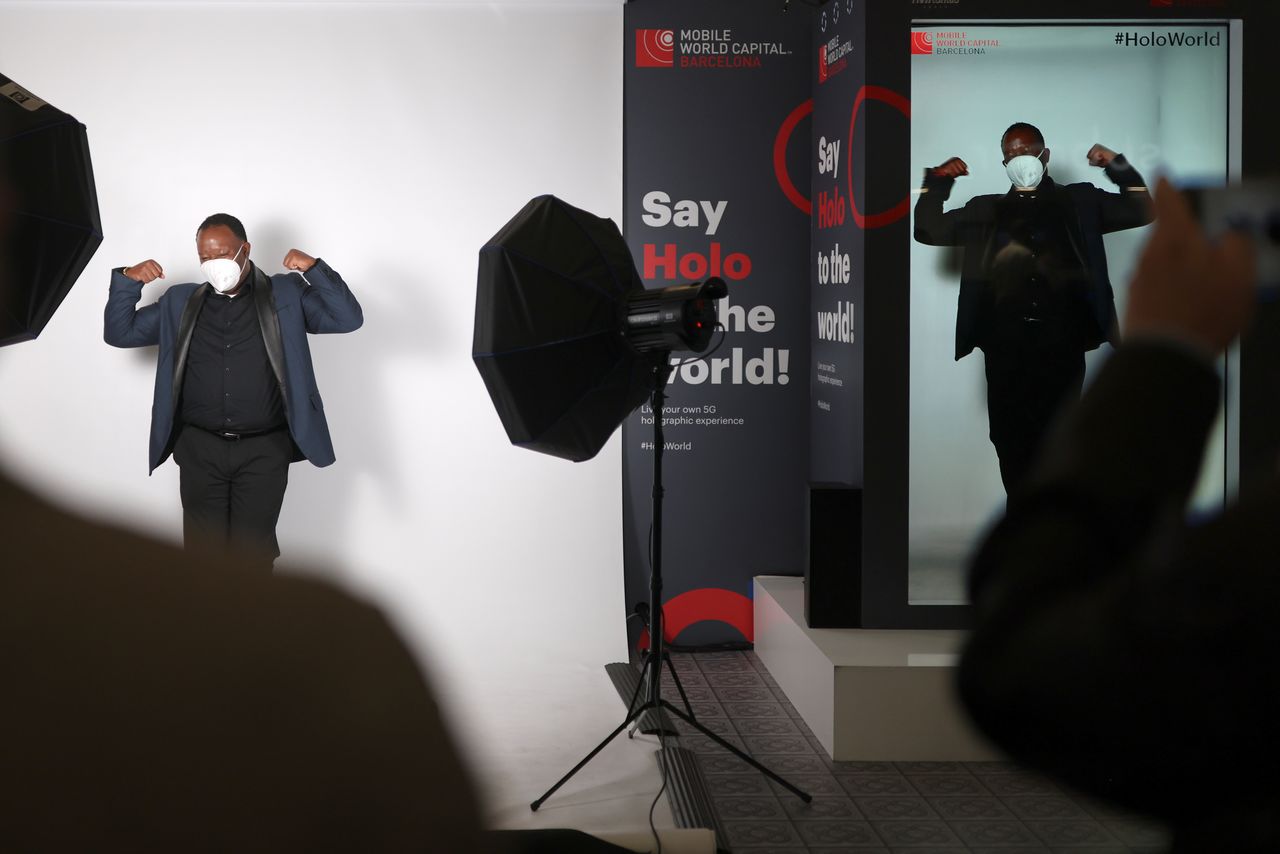 A man gestures as he is recorded and his hologram is displayed in real time next to him at the Mobile World Congress (MWC) in Barcelona, Spain, June 30, 2021. REUTERS/Nacho Doce 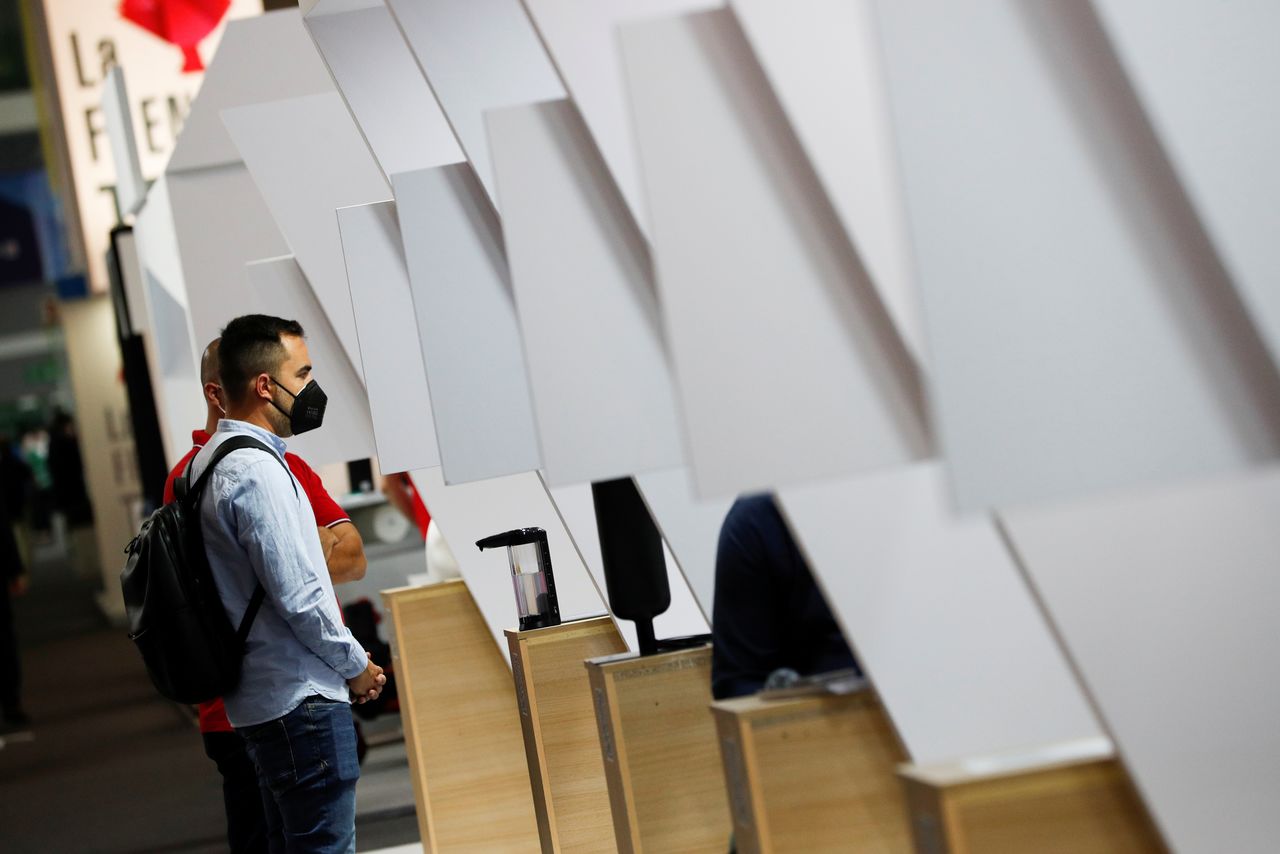 A man wearing a face mask stands next to a stand during the Mobile World Congress (MWC) in Barcelona, Spain, June 30, 2021. REUTERS/Albert Gea 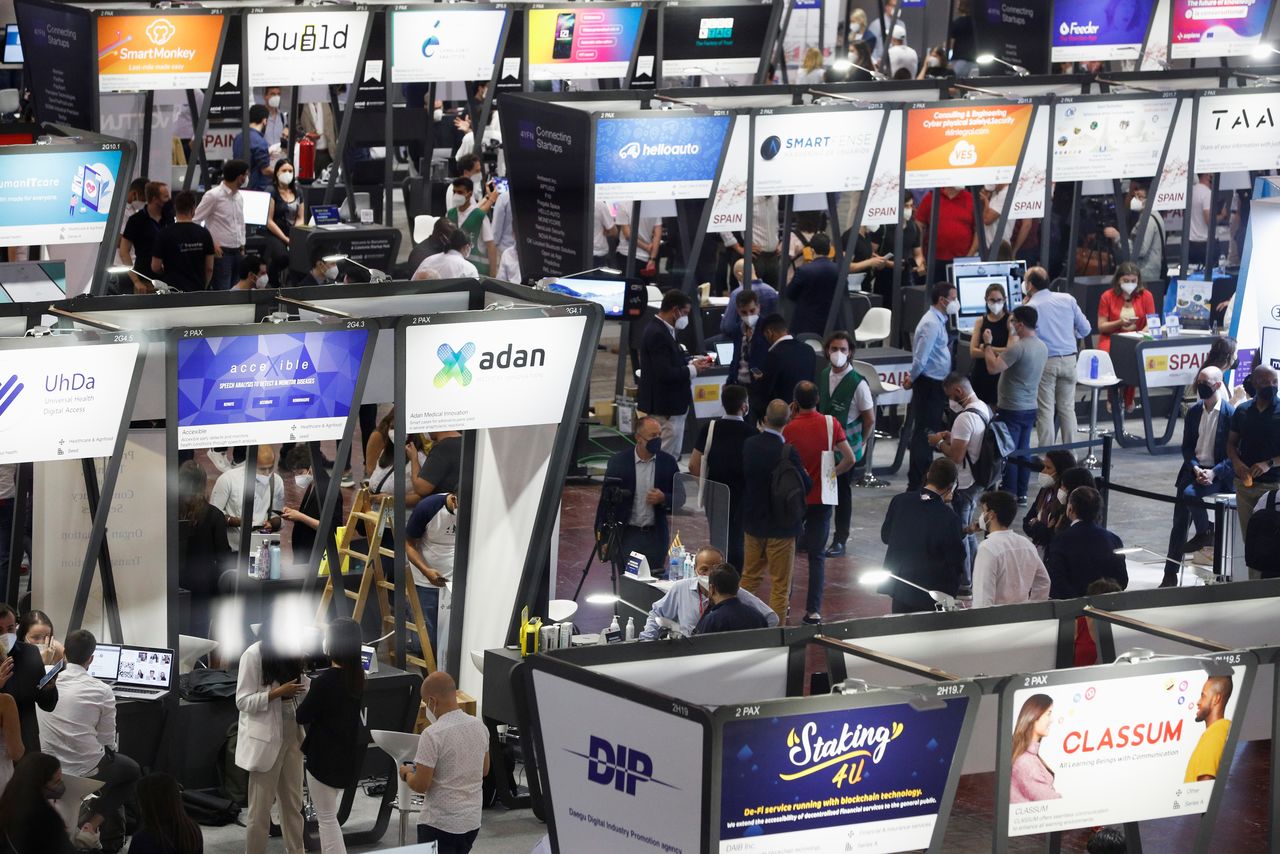