By Kiyoshi Takenaka and Hideyuki Sano

TOKYO (Reuters) -Japanese Prime Minister Yoshihide Suga's Liberal Democratic Party (LDP) and allies failed to win outright a local election in Tokyo on Sunday that was seen as a key test of voter sentiment ahead of national polls later this year.

Public broadcaster NHK said the LDP had won 33 seats in Tokyo's 127-member assembly, just ahead of Tokyo Citizens First, the party of Tokyo Governor Yuriko Koike, with 31 seats. Even with 23 won by its ally Komeito, LDP fell short of an outright majority -- a target that had been considered within reach.

The disappointing result could put pressure on Suga, whose term as LDP president expires at the end of September. The head of the LDP is virtually assured of being prime minister, given the party's dominance in parliament.

"It appears our seats are likely to be a little bit lower than what we have initially anticipated," NHK had earlier quoted Taimei Yamaguchi, chair of the LDP's election strategy committee, as saying.

Tokyo's election came as the capital is preparing to host the Olympic Games whilst dealing with a resurgence of COVID-19.

With a general election due by October, Suga has staked his political career on successfully holding the Games, postponed from last year due to the virus, and boosting vaccine rollouts.

He has said he will bar spectators if necessary. But exit polls by broadcaster TBS showed 57% of respondents were still opposed to the Olympics going ahead on July 23 as planned.

Koike's Tokyo Citizens First party wants the Olympics held without spectators while the opposition Constitutional Democrats and Communists have called for the Games to be cancelled or postponed.

Voters on Sunday said COVID-19 remained their chief concern. A resurgence of the pandemic in Japan has seen new COVID-19 infections in Tokyo rise to a more than five-week high, with 716 reported on Saturday.

"My focus on this election was the pandemic measures," a 26-year-old actor, who is deaf, wrote in a note to a reporter outside the polling station. He asked not to be named.

"I picked the candidate who would take actions to save infected people, as I am afraid of losing my job and my income if I get infected," he said, declining to name the candidate. "I don't care about political parties."

Another voter was critical of the LDP's handling of the pandemic.

"I wanted to give my vote to someone in the opposition as I don't support the current (national) government," said Noriko Ushimaru, a woman in her 80s. "They are hopeless in coronavirus responses. I don't see their determination to curb the virus."

She said the holding the Tokyo Olympics amid the pandemic and vaccine supply shortages were examples of the government's inadequate anti-coronavirus measures. 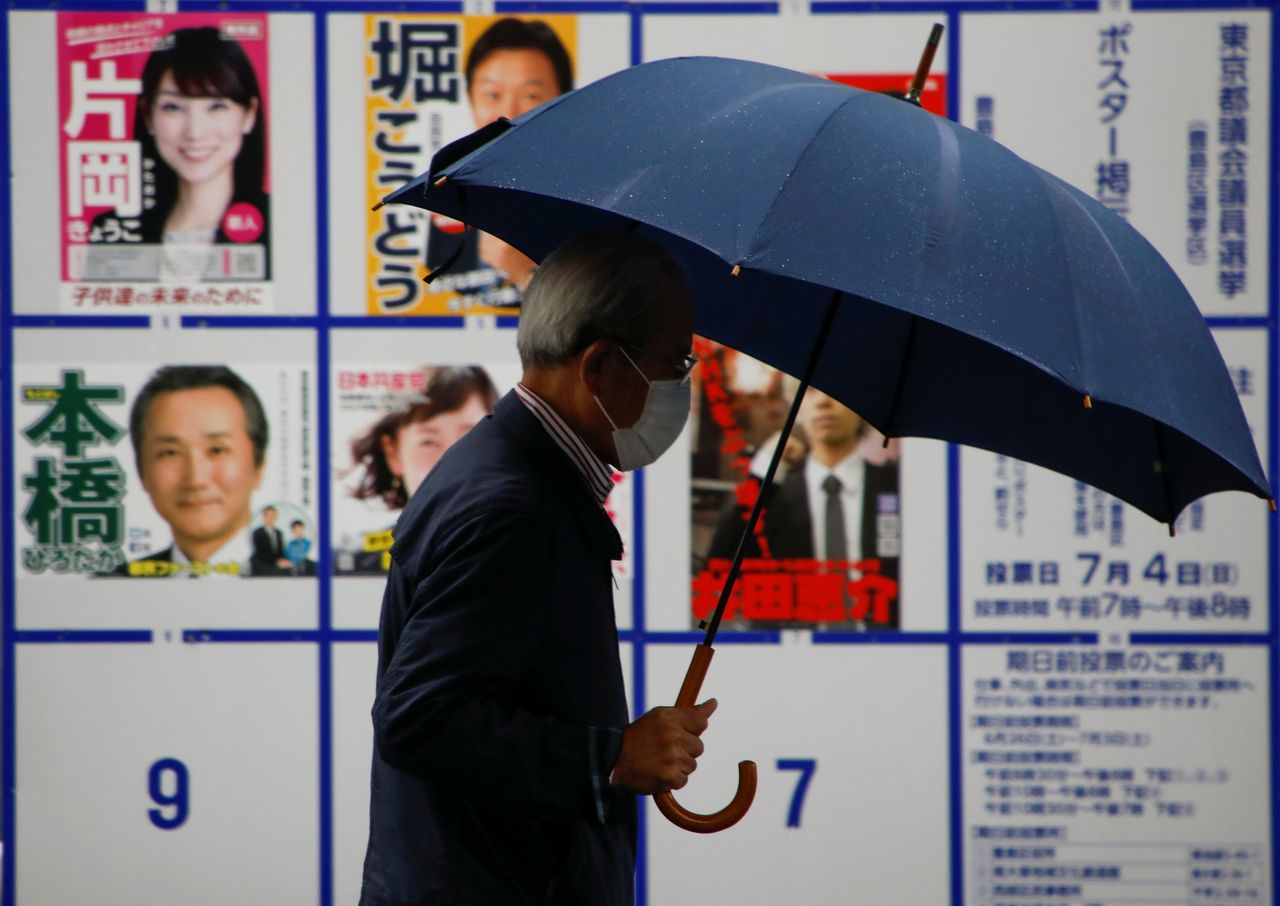 A voter wearing a protective face mask walks past a board displaying posters of candidates for the Tokyo Metropolitan Assembly election near a polling station, amid the coronavirus disease (COVID-19) outbreak, in Tokyo, Japan July 4, 2021. REUTERS/Issei Kato 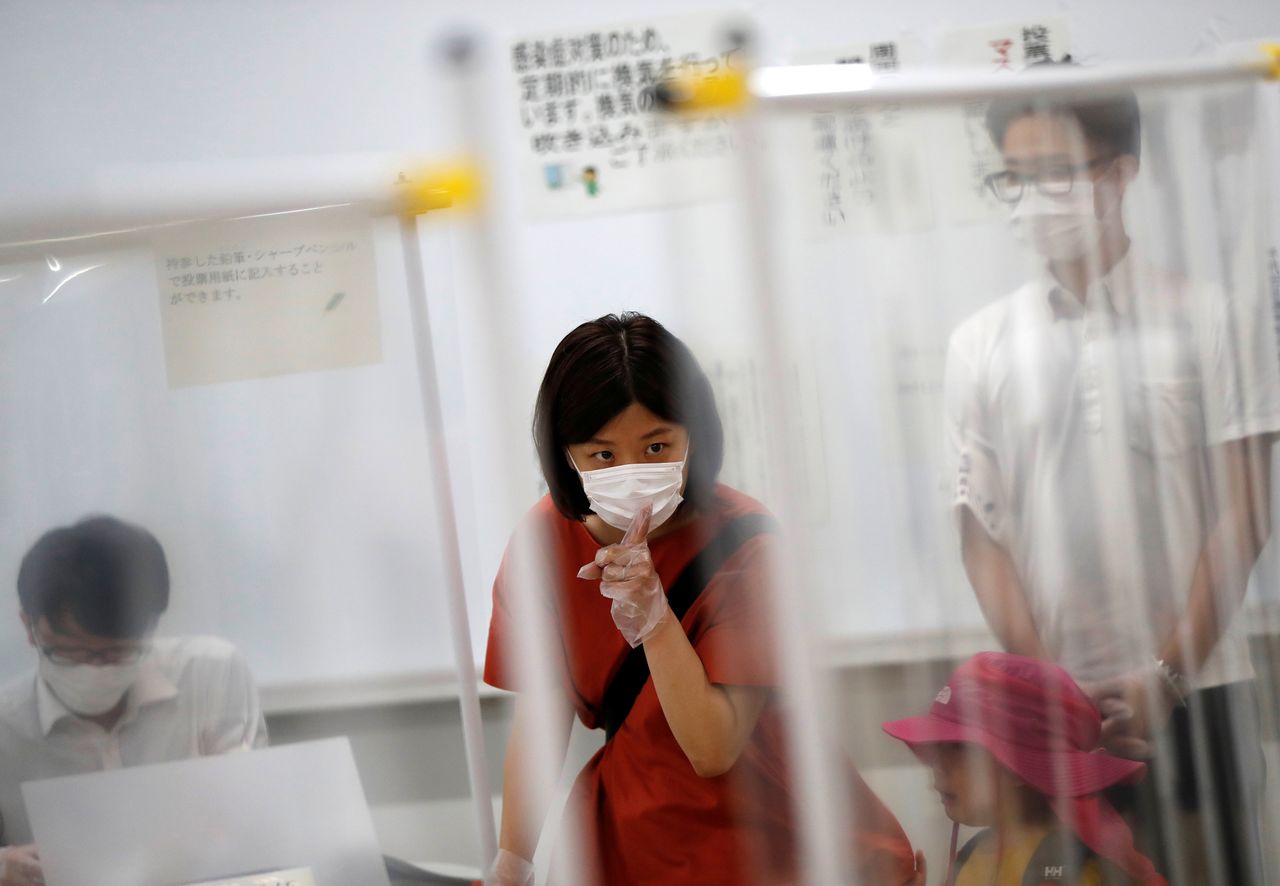 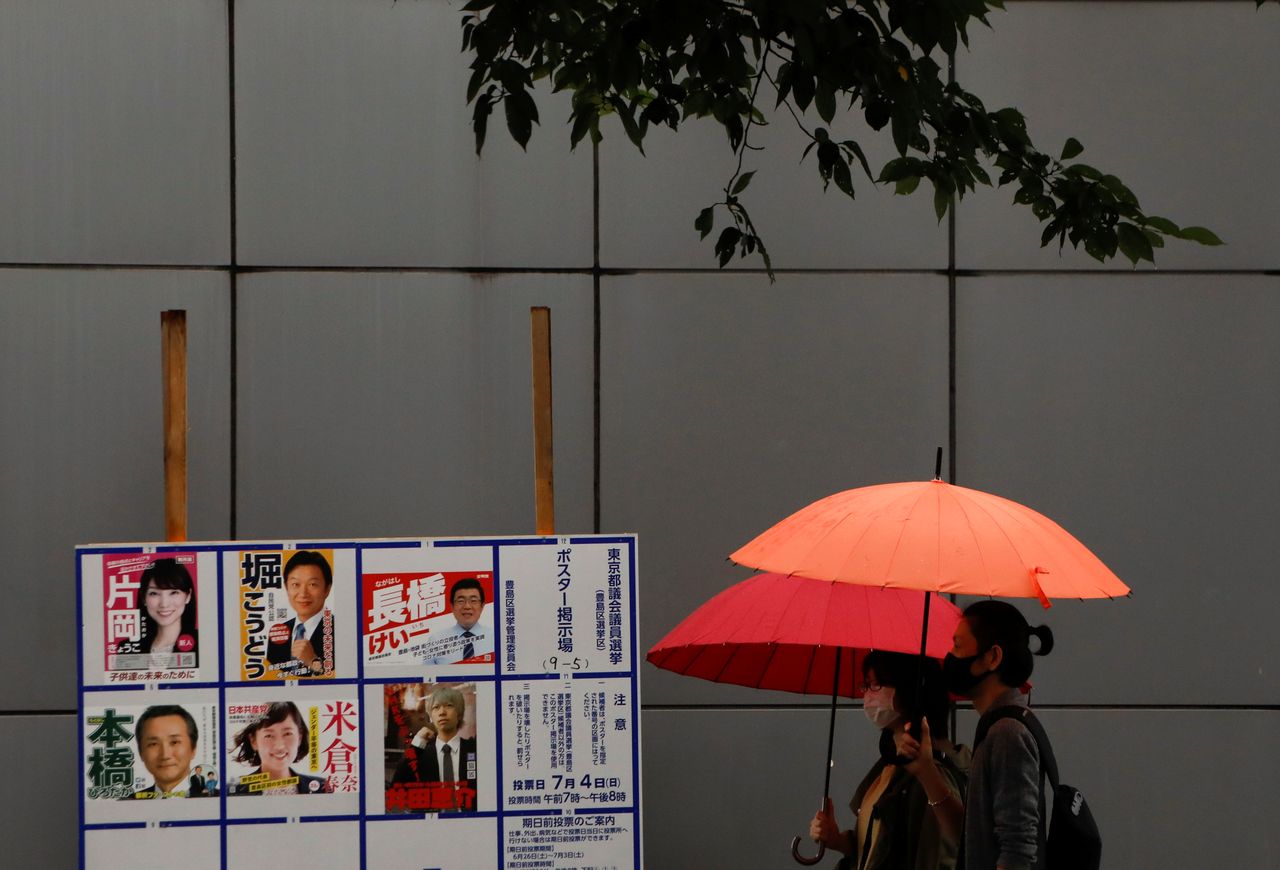 Voters wearing protective face masks walk next to a board displaying posters of candidates for the Tokyo Metropolitan Assembly election near a polling station, amid the coronavirus disease (COVID-19) outbreak, in Tokyo, Japan July 4, 2021. REUTERS/Issei Kato