Olympics-No spectators at marathons and race walks, Games at risk of more curbs 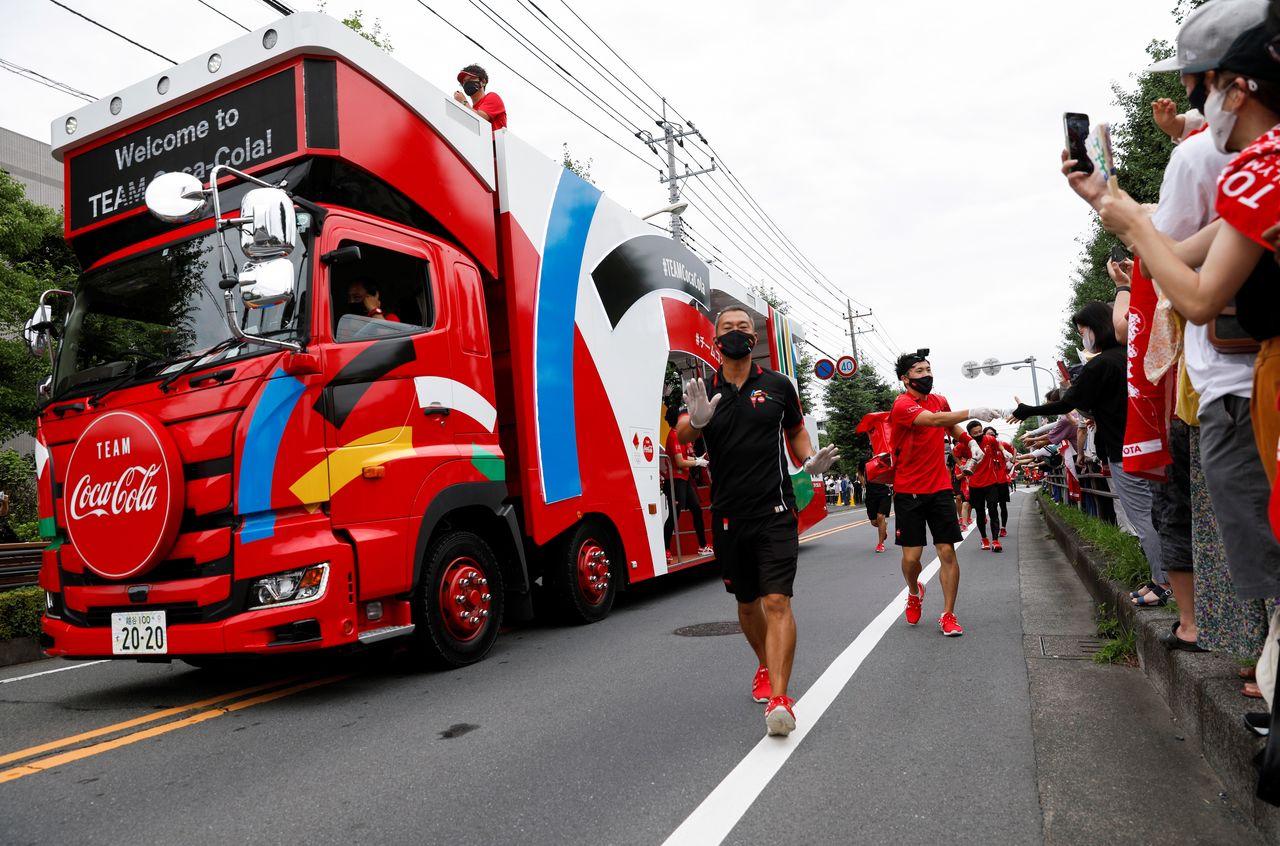 Sponsor truck and staff lead the relay before the runners' arrival during the first day of a Tokyo 2020 Olympic torch relay in the Saitama prefecture, amid the coronavirus disease (COVID-19) outbreak, in Wako, Japan July 6, 2021. REUTERS/Androniki Christodoulou

TOKYO (Reuters) -World Athletics said on Tuesday that it was surprised by the "seemingly inconsistent" decision to ask spectators to stay away from the marathon and race walk at the Tokyo Olympics, outdoor events that are hugely popular in Japan.

Organisers had earlier asked the public not to gather on the streets for the events to reduce the risk of infection amid the COVID-19 pandemic, after a technical working group meeting with Hokkaido prefectural and Sapporo city authorities and police.

The decision is a blow to fans in a country where the marathon has gained in popularity in recent years, after Naoko Takahashi and Mizuki Noguchi won gold in the women's event in 2000 and 2004 respectively.

"World Athletics is surprised by this new decision about our events in Sapporo, which is seemingly inconsistent with the decision to allow up to 10,000 spectators in venues in Tokyo, many of which are indoor venues," the athletics governing body said in a statement.

"We'll discuss this decision as soon as possible as it would be a great shame not to have spectators for the race walk and marathon in Sapporo given the popularity of both disciplines in Japan and the fact they are being held outdoors."

Japan is also considering barring all but VIP spectators from the Games' opening ceremony, a newspaper said, another downgrade for the Olympics that have had their pomp and spectacle tarnished by the novel coronavirus.

Once promoted as an extravaganza to showcase Japan to the world, the Games appear in danger of taking place largely without spectators in a country closed to visitors from abroad because of the pandemic and with areas around Tokyo still under restrictions.

The Games, already delayed a year, are set to open on July 23 despite concern that an influx of thousands of people from around the world could trigger new waves of infections.

Plans for the opening ceremony remain under wraps but the Asahi newspaper, ahead of talks with the International Olympic Committee and other organisers, reported that the government would slash the number of VIPs, such as sponsors' guests and diplomats, at the ceremony from an initial estimate of about 10,000.

During the Games, events at large venues and those after 9 p.m. would also be held without spectators, the paper said, citing multiple unidentified government sources.

Organisers have already banned overseas spectators and set a cap on domestic spectators at 50% of capacity, up to 10,000 people.

With the public nervous about new clusters of infections, medical experts have said no spectators would be the least risky option.

The question of spectators is due to be decided at five-way talks also expected on Thursday that will include the Tokyo governor and IOC President Thomas Bach, who arrives in Japan that day.

The government looks likely to decide on Thursday to extend a state of quasi-emergency in Tokyo and three nearby prefectures beyond an original end-date of July 11, government sources have said.

Kyodo News reported that the extension would likely last a month, meaning the curbs will be in place throughout the Olympics, which close with a ceremony on Aug. 8.

When the Games were postponed last year, Japanese officials said they hoped they would be held in 2021 as a symbol of "victory" by humankind over the virus.

With that celebration on hold as countries around the world grapple with new outbreaks, they now say the Games will help bring together a divided world.

In another blow, the Olympic torch relay, set to reach Tokyo on Friday and parade through the city until the opening ceremony, will be moved off public roads.

Instead, torch-lighting ceremonies without spectators will be held, the Yomiuri newspaper reported.

When Japan was awarded the Games in 2013, they were expected to be a celebration of recovery from a deadly earthquake, tsunami nuclear accident in 2011.

In 2015, then-prime minister Shinzo Abe promised visitors would be able to use self-driving cars to run around Tokyo and a start-up backed by Toyota Motor Corp said in 2017 it aimed to light the Olympic flame with its flying car.

The coronavirus has brought everyone down to earth.

Suga was keen to have fans in the stadiums, the Asahi said, but added some ruling party members wanted a ban, especially after the ruling coalition failed to win a majority in an election for the Tokyo's assembly on Sunday, partly due to dissatisfaction with the government's COVID-19 response.

That poll is seen as a bellwether for a general election later this year.

Japan has not had the explosive COVID-19 outbreaks seen elsewhere but has seen more than 800,000 cases and more than 14,800 deaths. A slow rollout has meant only a quarter of its population has had at least one vaccination.