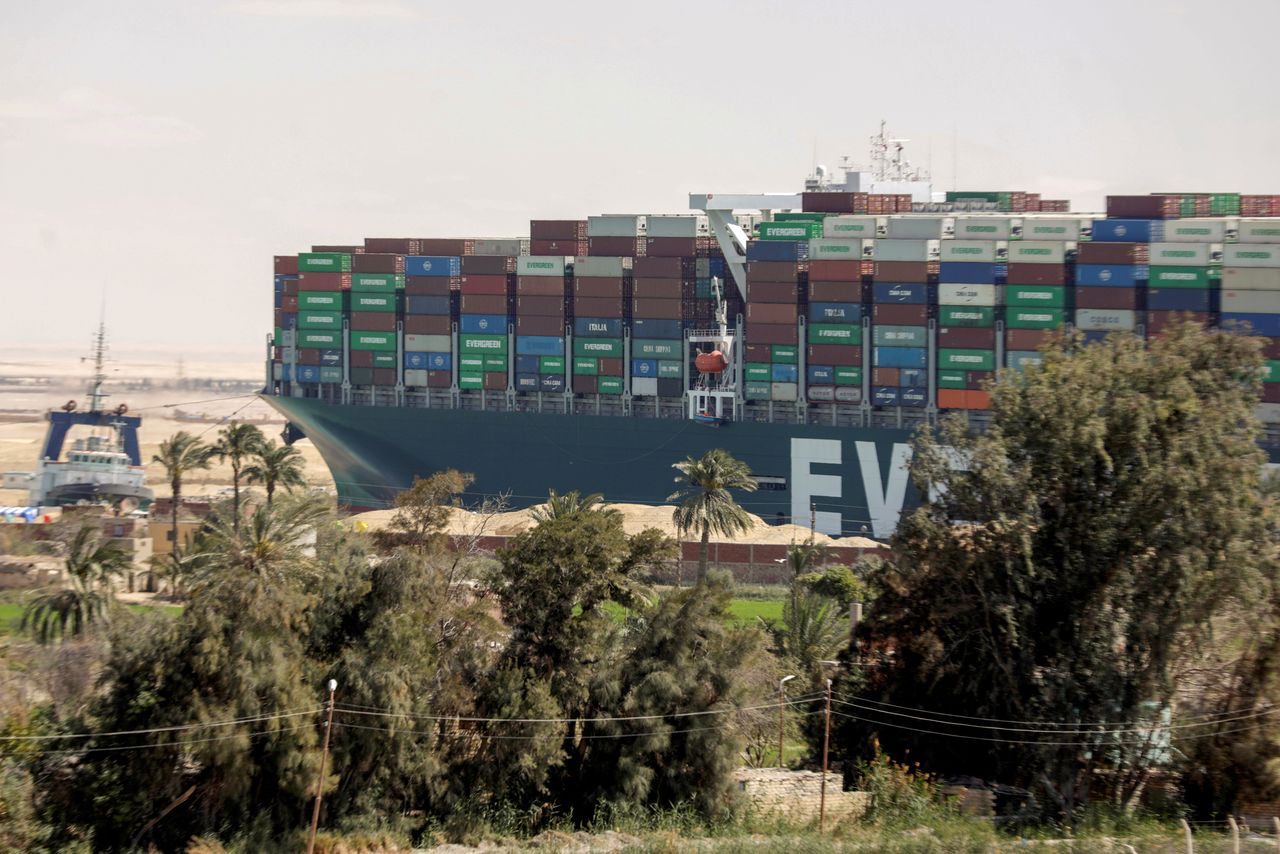 FILE PHOTO: A view shows the ship Ever Given, one of the world's largest container ships, after it was partially refloated, in Suez Canal, Egypt March 29, 2021. REUTERS/Mohamed Abd El Ghany//File Photo

(Reuters) - The Ever Given, one of the world's largest container ships, has been cleared to leave the Suez Canal after the canal authority reached a settlement with the vessel's owner and insurers.

The ship blocked the canal for six days in March, disrupting world trade.

The Ever Given, operated by Evergreen Line, ran aground on March 23 in the southernmost stretch of the Suez Canal, which has a single lane that ships pass through in convoys.

According to the Suez Canal Authority (SCA), the ship lost the ability to steer at a moment when winds were high and visibility poor, and it was travelling at well above the appropriate speed.

Guided by its captain and two SCA pilots, it twisted across the canal and buried its bow into the bank, blocking the channel diagonally.

About 15% of world shipping traffic transits the Suez Canal, one of the world's busiest waterways and the shortest shipping route between Europe and Asia.

It is an important source of foreign currency revenue for Egypt.

The six-day blockage caused a backlog of more than 400 ships at both ends of the canal.

Shipping rates for oil product tankers nearly doubled after the Ever Given became stranded, and the blockage disrupted global supply chains.

Some ships diverted around the Cape of Good Hope. Shippers warned that disruptions could take weeks or months to unravel.

The SCA and Dutch salvage company Smit tried for days to free the Ever Given using dredgers and tugs in the water and diggers on the bank.

They also emptied ballast tanks as they tried to refloat the 400-metre (1,310-foot) vessel, and were making contingency plans to offload some of its 18,300 containers.

They dislodged the ship with the help of high tides and newly deployed, powerful tugs on March 29, after having dredged tens of thousands of cubic metres of sand and earth.

After the Ever Given was freed it sailed north to the Great Bitter Lake, which separates two stretches of the canal, in order to be inspected for damage.

Shortly afterwards, the SCA's chairman said the canal was seeking compensation of nearly $1 billion over the incident.

The SCA obtained a court order allowing for the ship to be held as it pursued its claim, which it said covered salvage costs, loss of revenue and reputational damage.

It later publicly lowered the claim to $600 million then $550 million as it pursued an out-of-court settlement.

The Ever Given's Japanese owner, Shoei Kisen, and its insurers disputed the detention and the compensation claim.

Both sides announced on July 4 that a final settlement had been reached, without disclosing details.

The crew, all Indian nationals, remained on the ship throughout, though several members were allowed to leave for personal reasons.