Factbox-Plotting the return to normal as Delta variant spreads 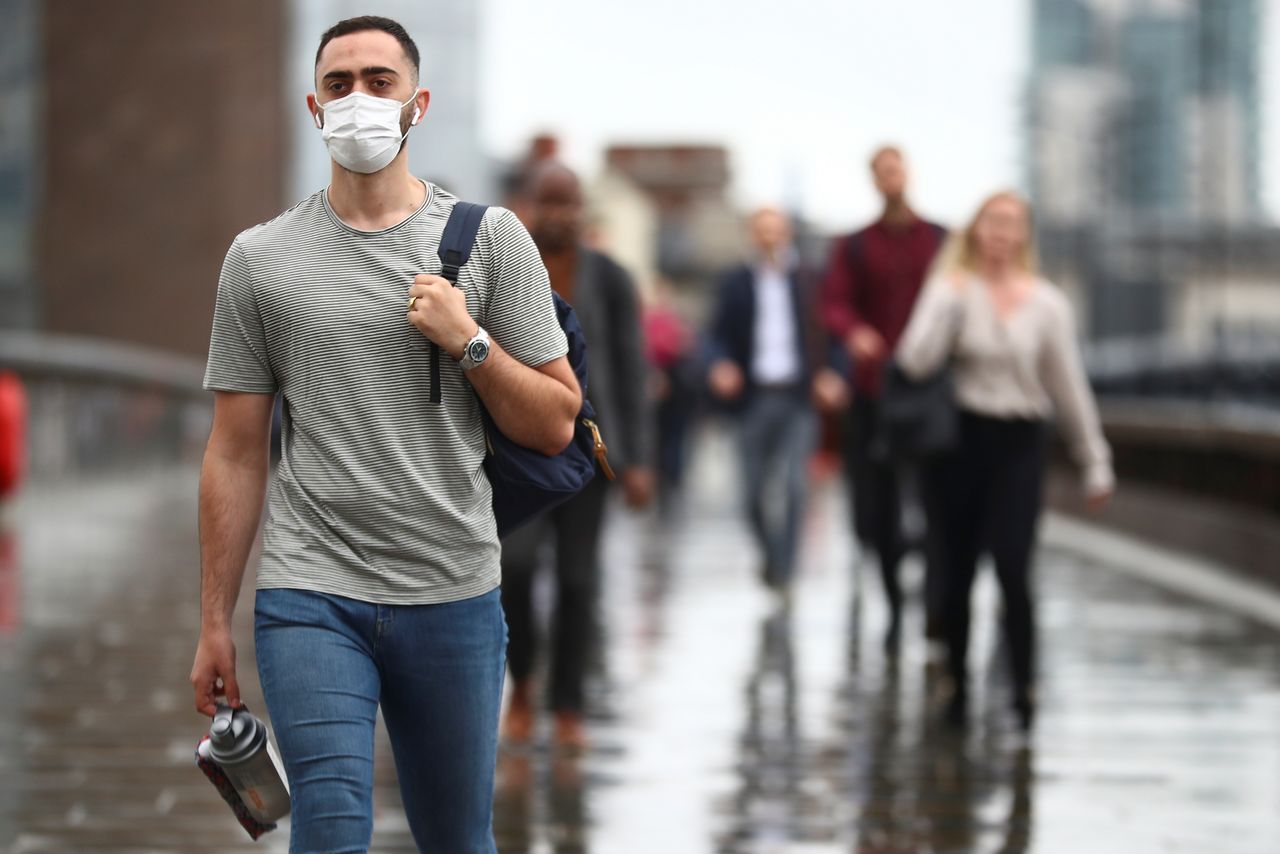 FILE PHOTO: A commuter crosses the London Bridge, amid the spread of the coronavirus disease (COVID-19), in London, Britain July 6, 2021. REUTERS/Hannah McKay

(Reuters) - As COVID-19 vaccine rollouts gain momentum, many countries are opening borders and letting people back into restaurants, shops and sports venues after more than a year of on-off lockdowns.

But the spread of the highly contagious Delta variant has led some countries to delay elements of their return to normal.

Here are some of their plans, in alphabetical order with the latest moves in each country listed first:

Australia's New South Wales state ordered a week-long extension of Sydney's lockdown on July 7, warning new cases were bound to rise due to the Delta variant.

In England, non-essential retailers and outdoor service in pubs and restaurants opened with capacity restriction in April, followed in May by indoor hospitality, cinemas and sports halls.

Canadians and permanent residents who have received two vaccination doses were exempted from quarantine when returning to the country from July 5.

From July 15, international travellers no longer need to present a negative test and in-person classes resume once staff are vaccinated.

On June 3, the country approved reopening most large events like concerts and sports matches with 25% capacity for cities with intensive care units' occupancy below 85%.

Restriction measures were lifted on July 6 in the Landes southwestern region after a delay caused by high numbers of infections with the Delta variant.

Mask mandate outdoors and nationwide night-time curfew ended in June, while nightclubs are set to reopen from July 9.

Cafes, bars and restaurants fully reopened in June, with sports halls and casinos also resuming operation. Terraces, shops and cinemas have been open since May.

Germany aims to lift all remaining social and economic curbs as soon as everyone has been offered a vaccine, which should happen in August.

General travel warnings for regions with a seven-day coronavirus incidence of below 200 were lifted starting July 1. Travellers from low-risk areas have been able to enter the country without quarantine since May.

A rule which forced companies to allow working from home was lifted on June 30.

Curfews and the obligation to provide a negative test to go shopping were lifted in May from those vaccinated or recovered.

New Delhi's shops and malls re-opened in June, although bars, gyms, salons, cinemas and parks remained shut. Some businesses in Tamil Nadu, known for its automobile industry, were allowed to bring back 50% of employees. In Bengaluru, capital of Karnataka state, businesses were allowed to partially reopen, though strict night curfews remained.

Israel told citizens on June 24 to again wear masks indoors, 10 days after being allowed to ditch them.

It reopened borders to some tourists on May 23, giving the green light to visits by 20 groups of between five and 30 tourists from countries including the United States, Britain and Germany.

People were able to stop wearing masks outdoors from June 28 and a nightly curfew was scrapped on June 21.

Indoor service at restaurants resumed from June 1, following a partial reopening in April.

Quarantine restrictions for travellers arriving from the EU, Britain, Israel and the Schengen area were lifted in May.

Japan is considering banning all spectators from the Olympics, several sources told Reuters on July 7, with authorities expected to declare a state of emergency for Tokyo to contain infections 16 days before the Games begin. Organisers have already banned spectators from overseas.

Tokyo and three neighbouring prefectures are now under a 'quasi' state of emergency set to run through July 11.

In June, capacity limits for concerts, sports events and churches were raised to 50%, with hotels at up to 75%.

Poland reopened shopping centres, sports facilities, hotels and restaurants in May, and the number of people allowed in indoor events was raised to 150 on June 6.

The government had said it would relax social distancing measures in July, but case numbers shot up and authorities in Seoul and surrounding areas extended restrictions to July 7.

From July, masks are no longer required outdoors for those vaccinated, and fully vaccinated overseas visitors can apply for exemptions from quarantine.

Up to 4,000 people can attend concerts and other cultural shows. Sports stadiums can operate at 30% to 50% capacity.

Fresh outbreaks in July have prompted several regions, including Catalonia and Cantabria, to consider reimposing restrictions on nightlife and social events.

The country lifted a blanket obligation to wear masks outdoors on June 26 and most curfews in May.

It will lift capacity restrictions in football and basketball games from next season.

Low-risk non-EU travellers have been allowed in without a negative test since May, and from early June all vaccinated people could enter.

Thailand said on July 4 it would allow some construction projects to resume in its capital and surrounding provinces but most sites and workers' camps would remain closed.

A tourism pilot began on July 1 on the country's most popular island, Phuket, with full reopening of travel planned over the next four months.

The United States is still considering when to lift travel restrictions for international visitors, but does not intend to ultimately require vaccinations for entry.

On June 15, the state of New York lifted all state-mandated restrictions, including capacity limits for retailers and gyms. Mitigation measures are still required in public transit and healthcare settings.