By Ju-min Park and Linda Sieg

TOKYO (Reuters) -A Japanese official choked up with tears on Friday as he apologised for the cancellation of Olympic tickets, a moment that crystallised the country's pain at seeing the Tokyo 2020 Games overshadowed by a worsening COVID-19 pandemic.

The display of emotion from Hidenori Suzuki, the official in charge of ticket sales for Tokyo 2020, came a day after organisers bowed to political pressure and rising infections in the capital, barring almost all fans from the Games just two weeks before they are due to start.

Two visiting Olympic delegation members tested positive for COVID-19, media said on Friday, in a reminder of the risk as infections rise in the capital.

"We've done all we could to meet the expectations of those who had bought the tickets and I feel a deep sense of pain," Suzuki told a briefing on the ticket cancellation procedures.

He fought back tears and paused in his speech when he was asked about the feelings of staff at the organising team following the decision to ban spectators.

Without spectators, Japan is now all but deprived of its hopes for Games with pomp and public spectacle. The government and organisers had long seen the event as a chance to display the country's recovery from a devastating 2011 earthquake and nuclear crisis.

Spectators from overseas were banned months ago https://www.reuters.com/article/us-olympics-2020-timeline-idCAKCN2EE1IN.

A Lithuanian athlete tested positive in Hiratsuka, west of Tokyo, and a member of the Israeli delegation was found positive on arrival at Tokyo's Haneda airport, domestic media reported, without giving details.

"Please stay at home for this Olympics, and share that excitement with families at home," Japanese Health Minister Norihisa Tamura told a news conference.

The Games, postponed from last year, are scheduled to run from July 23 to Aug. 8, and opinion polls show the Japanese public is worried about going ahead with them during a pandemic.

In a recent media survey, 35% favoured no spectators, 26% wanted some limits and 34% wanted the Games cancelled or postponed.

Tara Kirk Sell, an Olympic silver medallist in swimming and professor at the Johns Hopkins Bloomberg School of Public Health, welcomed the decision to cancel spectators.

"It's obviously disappointing for everyone involved. But I think it reduces the risk quite a bit," she told Reuters.

"In the midst of just being lined up with the best in the world, you are not really worried about who is in the stands," Harrison told Kentucky's Spectrum News 1.

"You are just worried about going out and competing to the best of their abilities."

Tokyo 2020 President Seiko Hashimoto said organisers aimed to decide on spectators at the Aug. 24-Sept. 5 Paralympics as soon as possible after the Olympics close.

Ticket holders for Olympic events to be held without spectators will be refunded automatically and a new ticket lottery will be held for events that will still be held with spectators, with results announced on July 10, organisers said.

Asked about plans by top International Olympic Committee officials to go to Hiroshima and Nagasaki, devastated by atomic bombs in the final days of World War Two, Hashimoto said the visits were a chance to send a message of world peace.

Remarks by IOC officials seeming to dismiss concerns about the pandemic have angered many in Japan and Hashtag #BachGoHome trended on Twitter on Thursday, the day he arrived in Japan.

Japan has not suffered the huge outbreaks seen elsewhere but has recorded more than 800,000 cases and over 14,890 deaths. Tokyo reported 822 new infections on Friday, the 20th straight day of week-on-week rises.

Just over 25% of the population has received one vaccine shot and supply glitches are causing an initially delayed vaccination rollout to stumble.

Tokyo - which had been counting on a record boom in tourism - has experienced little buzz and excitement.

The Tokyo leg of the Olympic torch relay began on Friday with a small ceremony in a nearly empty park. The relay will be kept off public streets and only small ceremonies, with no public spectators, will be held over the next two weeks

People will also be asked not to gather for events on public roads, such as triathlon and cycling, though some venues outside the greater Tokyo metropolitan area will allow small numbers of spectators.[nL2N2OL0J8] 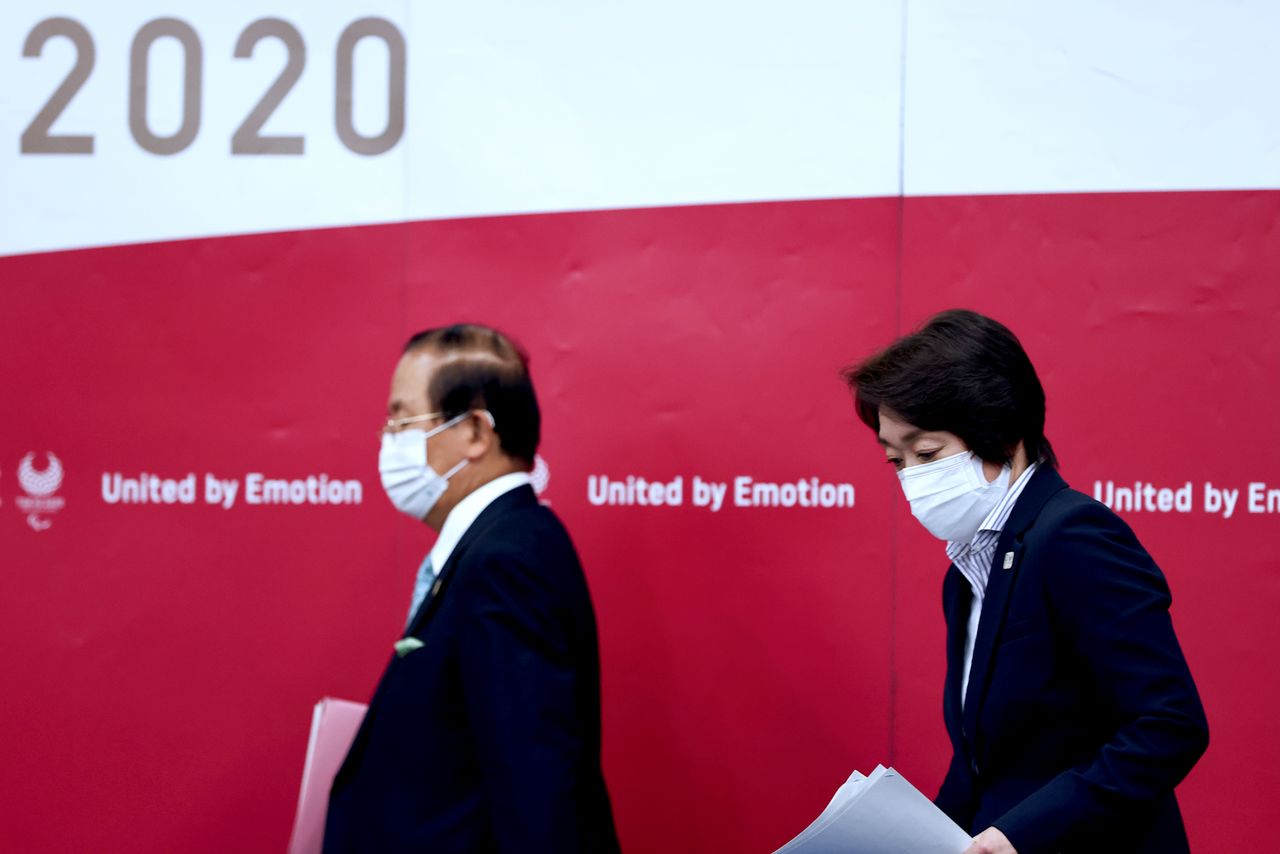 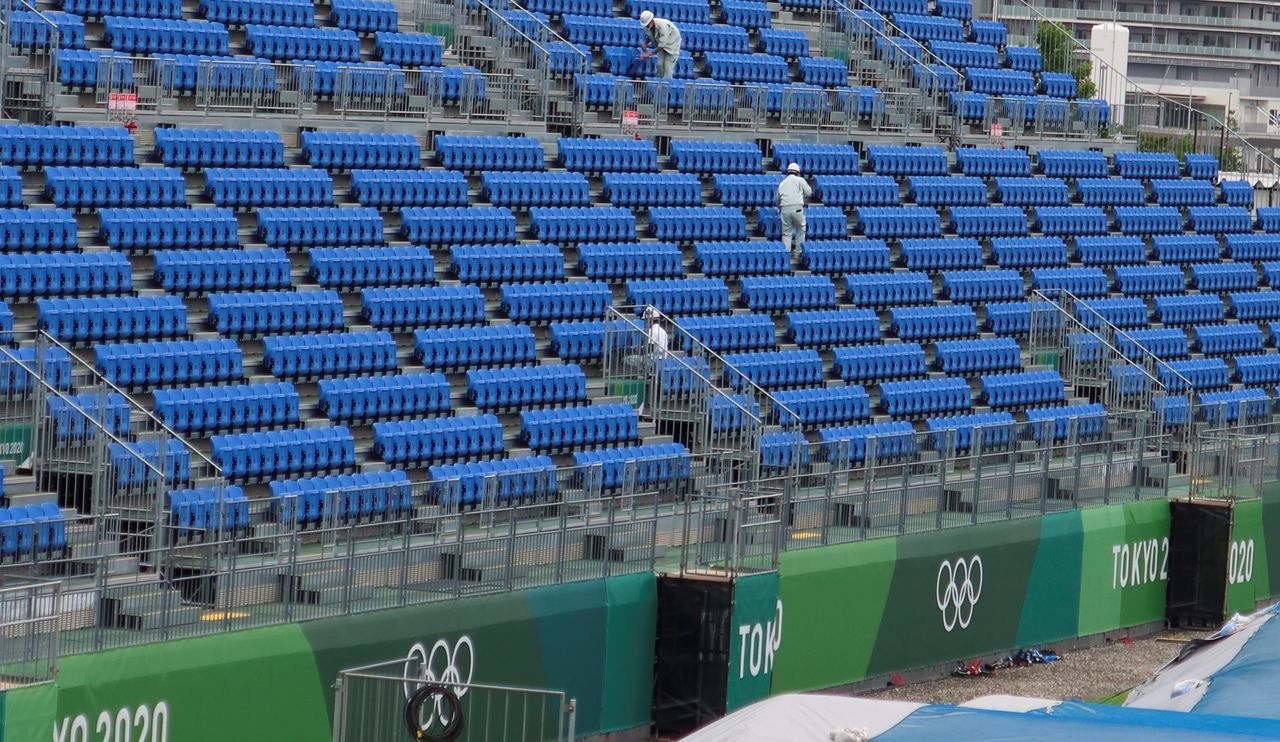