LONDON (Reuters) -Kerry Kraker, 56, has worked in kitchens all his life. Since March he's spent around $100 a week - half his spare cash – on silver coins. He's part of a growing social media movement who say they are buying bars and coins for protection from a coming age of inflation.

"They are so encouraging and so convinced in the changes they can cause," Kraker, who lost his home in the financial crisis, told Reuters.

Inspired by Reddit forum WallStreetBets, some of the 122,000-strong community hope to corner the market and bring down what they say is an unjust banking system.

Market professionals say that is unlikely to succeed - there is plenty of silver, and central bankers in the United States and Europe expect inflation to stay in low single-digits.

But bankers aren't getting through to this group.

"There's a bit of anger, like 'fuck the system.' If there's a back door to wealth, I might take that door because the front door is closed," said Kraker. "The bankers and others have basically shut that door for everyone who is not themselves."

The core of the movement is a Reddit community called Wall Street Silver, formed in January at the time WallStreetBets was marshalling an uprising of ordinary people against the financial elites, through coordinated buying of company shares.

Reuters spoke to more than 20 members, who call themselves "silverbacks" and "apes," have a home page featuring an image of an army of primates on the march from the "Planet of the Apes" movie, and say things like "Ape like shiny." They organise "raids" – days on which everyone buys together.

The group's founder, Ivan Bayoukhi, is a 24-year old former car salesman living with his parents in Alberta, Canada. "NOW IS THE TIME TO WAKE UP AND TAKE THE POWER BACK IN THE HANDS OF THE PEOPLE," says https://www.reddit.com/r/Wallstreetsilver/comments/mlpxev/now_is_the_time_to_wake_up_and_take_the_power one of his characteristic posts.

Silver costs around $26 an ounce. Stackers think the price will rise as inflation erodes the value of currencies, demand for silver rises, and supplies run short. Some say that by buying up bars and coins, they can jack up prices by 100% or even 1,000%, to the point where they can call the shots against the so-called bullion banks, the large financial institutions which lead trade in precious metals.

A March post Our time draws nigh...keep stacking and we will win the day! : Wallstreetsilver pictured silver coins laid out to spell a message to the head of JPMorgan Chase & Co, a U.S. investment bank which dominates the bullion trade: "KISS MY ASS JAMIE DIMON." JPMorgan declined to comment.

"In a year or two we will have millions of people in the movement," Bayoukhi told Reuters. "And then it will be over for the bullion banks."

Prices of silver and gold, which are traditionally seen as safe stores of wealth, have risen since 2019: Gold is up around 40% and silver around 70% since then. The silver stackers are joining millions worldwide who believe currencies are vulnerable – a fear that has grown as governments borrowed and printed money in the pandemic.

"It scares me every day when this bomb will burst," said Tim Hack, a 23-year-old stacker in Germany. "Silver and gold really have intrinsic physical value that you can even feel when you hold it in your hand."

Posters on Reddit joined the silver fray on Jan. 27, when posts appeared on WallStreetBets saying that if enough people bought the metal, they could push prices to the moon.

"Corner the market," said one.

Adding to the impetus was an argument put forward on Reddit that big banks trade huge quantities of paper contracts for silver that they don't have in their possession, keeping prices lower than they should be.

In some ways, that's correct.

Contracts representing around 800 million ounces of silver are active in the New York futures market alone - more than twice the amount the exchange says is in its registered vaults, not all of which is available for delivery. Much of the silver that banks buy and sell in London, another big trading hub, is borrowed, bankers and traders say.

If every professional who owns silver on paper called in their dues at once, there wouldn't be enough metal on hand, they agree. The system works because most people with contracts don't want actual metal, which they'd have to pay to store and insure. They are speculators, or miners and jewellers, hedging their risks.

After the posts on WallStreetBets, around $3 billion rushed into a fund run by asset managers Blackrock that stores silver for investors. Blackrock said it added more than 100 million (adds dropped word) ounces of silver to its stockpile in three days. Silver's wholesale price jumped nearly 20%.

Much of the silver stored for Blackrock is in London. The London Bullion Market Association (LBMA), an industry body, later said that there had been "concerns that London would run out of silver."

Blackrock told Reuters it did not track where the money had come from.

The Reddit group's founder Bayoukhi said he watched with growing excitement, turned to his father and said, "Why don't I start a Wall Street silver community?"

There's also truth in Redditors' claims that big players can influence the silver market. One trader tactic is spoofing - sending out fake buy or sell orders to shift prices before completing the real trade.

In 2020, JPMorgan paid $920 million to U.S. authorities to settle charges that its staff sent "hundreds of thousands" of fake orders into precious metals and Treasury markets. The bank said at the time that the people responsible had left and it had improved its compliance systems. It declined further comment for this story.

But the impact of spoofing lasts only seconds or minutes, said Ross Norman, a London-based former precious metals trader.

The January squeeze lasted three days. Then WallStreetBets returned its focus to stock markets; silver calmed. Since early February, the price of silver has fallen by a dollar.

Undeterred, Wall Street Silver issues a deluge of tips, analysis, memes, photos and encouragement. It is only Reddit's 3,783rd biggest community, but it is frequently in the top 20 for volume of posts per day.

Reddit buyers sit at the end of a fat silver pipeline. Only about a quarter of the 1 billion ounces or so that are produced each year is used to manufacture the bars and coins that most of them are buying, analysts say. Most of the rest is used for jewellery and in industrial applications.

Michael Mesaric, who runs the world's largest gold and silver refiner - Valcambi SA, in Switzerland - says the 1,000 ounce bars of silver used in the wholesale market are plentiful: For small investors to think they can corner the market is "entirely wrong."

"They can engineer a squeeze on products," he said. "But silver in total? They'll have a hell of a time."

Investors will stockpile a lot of silver this year, but less than in 2020, according to consultants Metals Focus. Demand in the West is strong, but in India, one of the biggest silver consuming countries, the pandemic is reducing people's ability to buy, they say.

Silver coins and bars can certainly hold their value. Higher inflation should lift prices, as will rising demand from makers of goods like electronics and solar panels, said Rhona O'Connell, an analyst at traders and brokers StoneX.

But she, and others at companies that trade the metal, think predictions of $1,000 an ounce are out of this world.

Of 39 analysts and traders polled by Reuters in April, only seven thought silver prices would average $30 or more in 2022. The highest average that they forecast was $44.

Redditors are unmoved. Kraker, the restaurant worker, has begun reading obsessively about inflation, money supply and other economic data. "There is a monster around the corner," he said. "I'm trying to sharpen my stick." 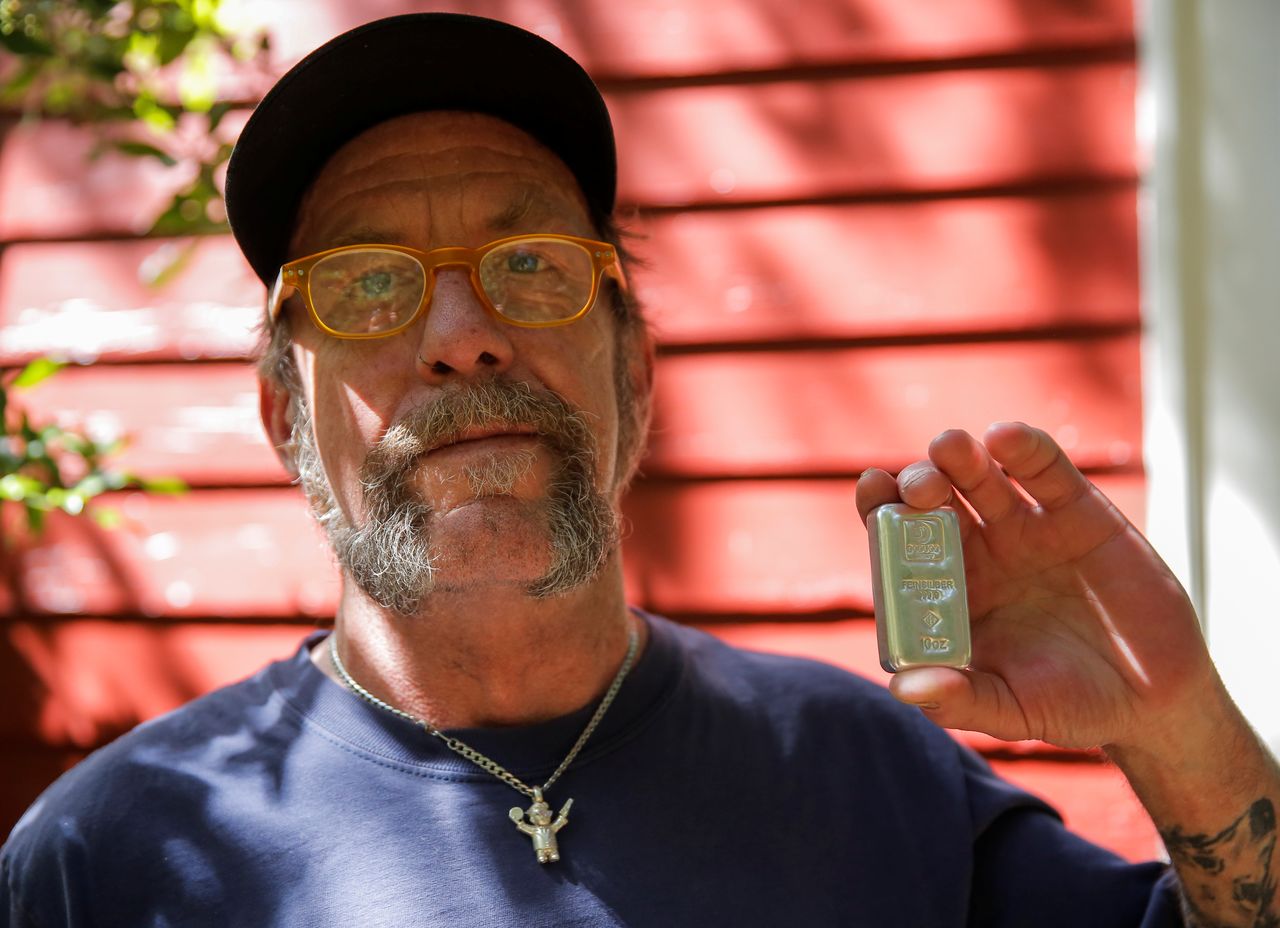 Kerry Kraker, who is a part of the "Wall Street Silver" Reddit community and regularly invests in silver with his weekly savings, displays a 10-ounce silver bar while posing for a portrait at his home in Seattle, Washington, U.S., June 12, 2021. Picture taken June 12, 2021. REUTERS/Lindsey Wasson 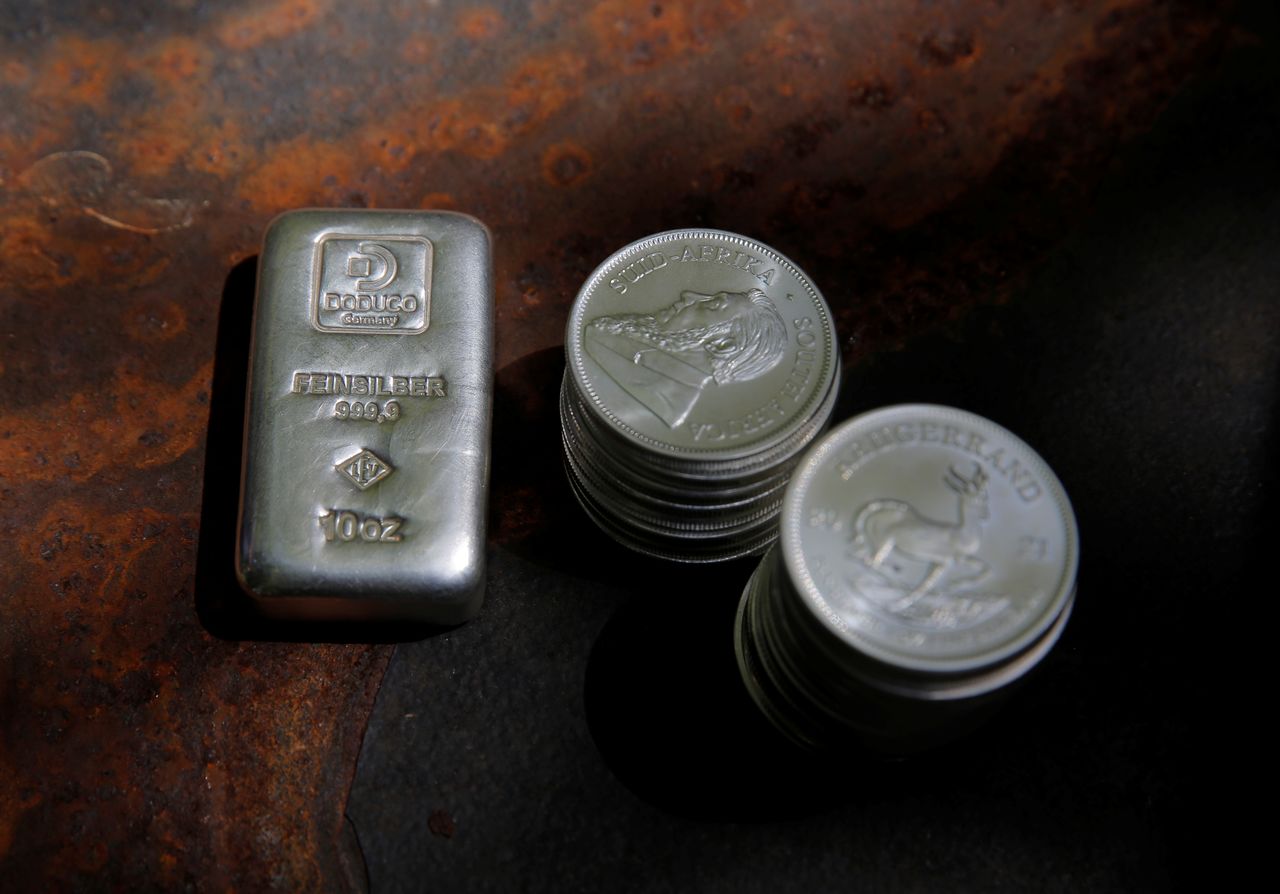 A 10-ounce silver bar and silver Krugerrand coins owned by Kerry Kraker, who is a part of the "Wall Street Silver" Reddit community and regularly invests in silver with his weekly savings, pictured at his home in Seattle, Washington, U.S., June 12, 2021. Picture taken June 12, 2021. REUTERS/Lindsey Wasson 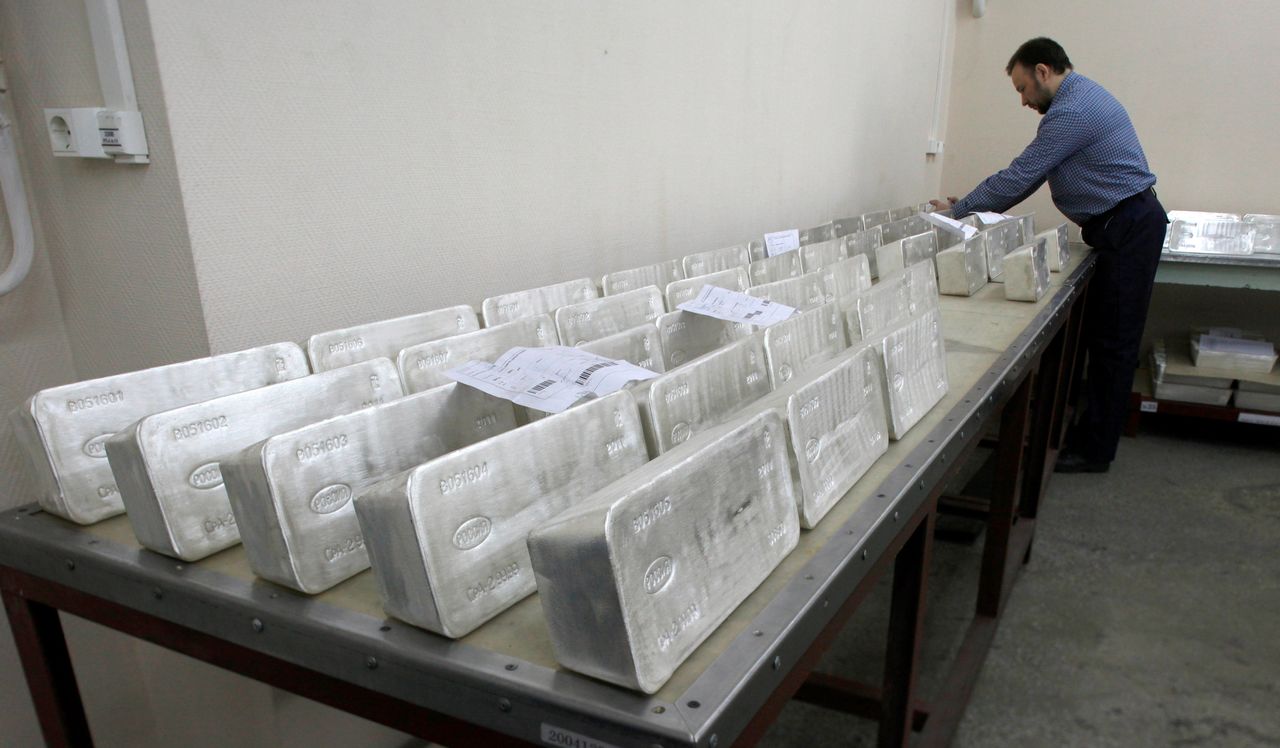 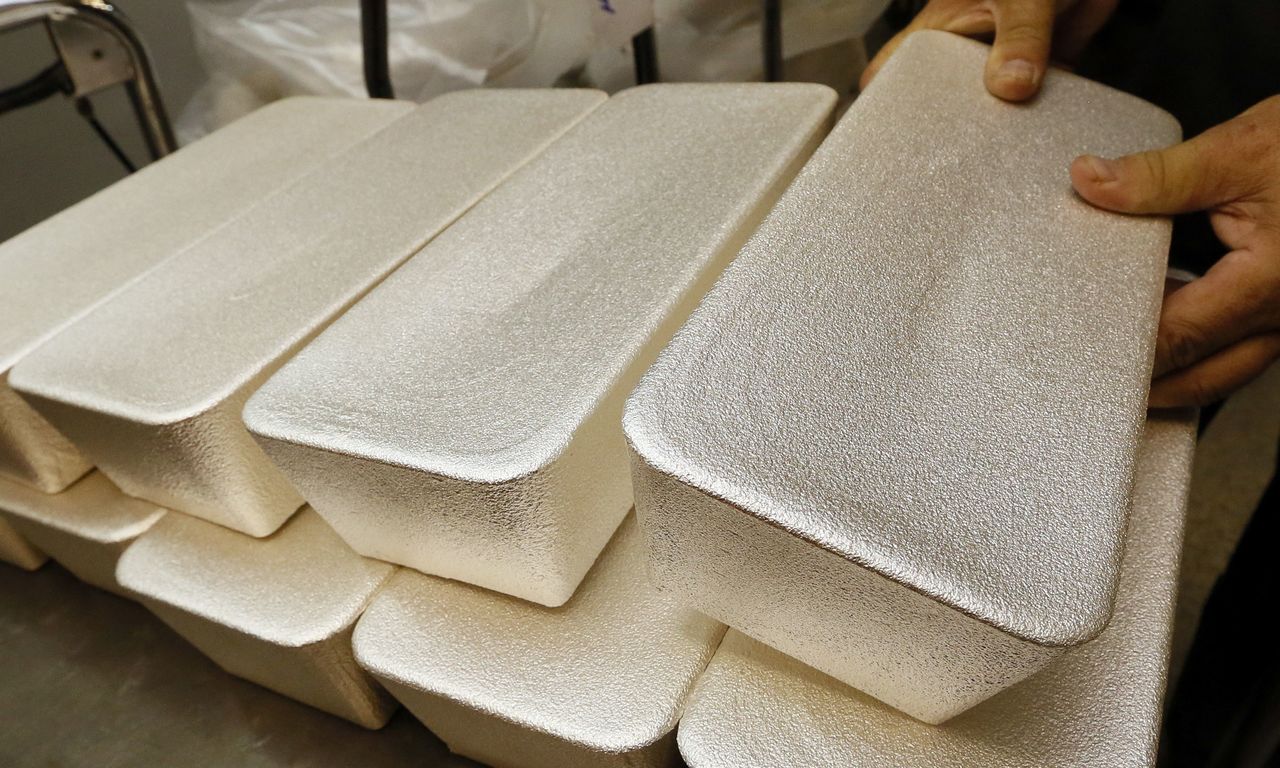 FILE PHOTO: An employee places ingots of 99.99 percent pure silver on a cart at the Krastsvetmet non-ferrous metals plant, one of the world's largest producers in the precious metals industry, in the Siberian city of Krasnoyarsk, Russia September 22, 2017. REUTERS/Ilya Naymushin - UP1ED9M14UU9X/File Photo 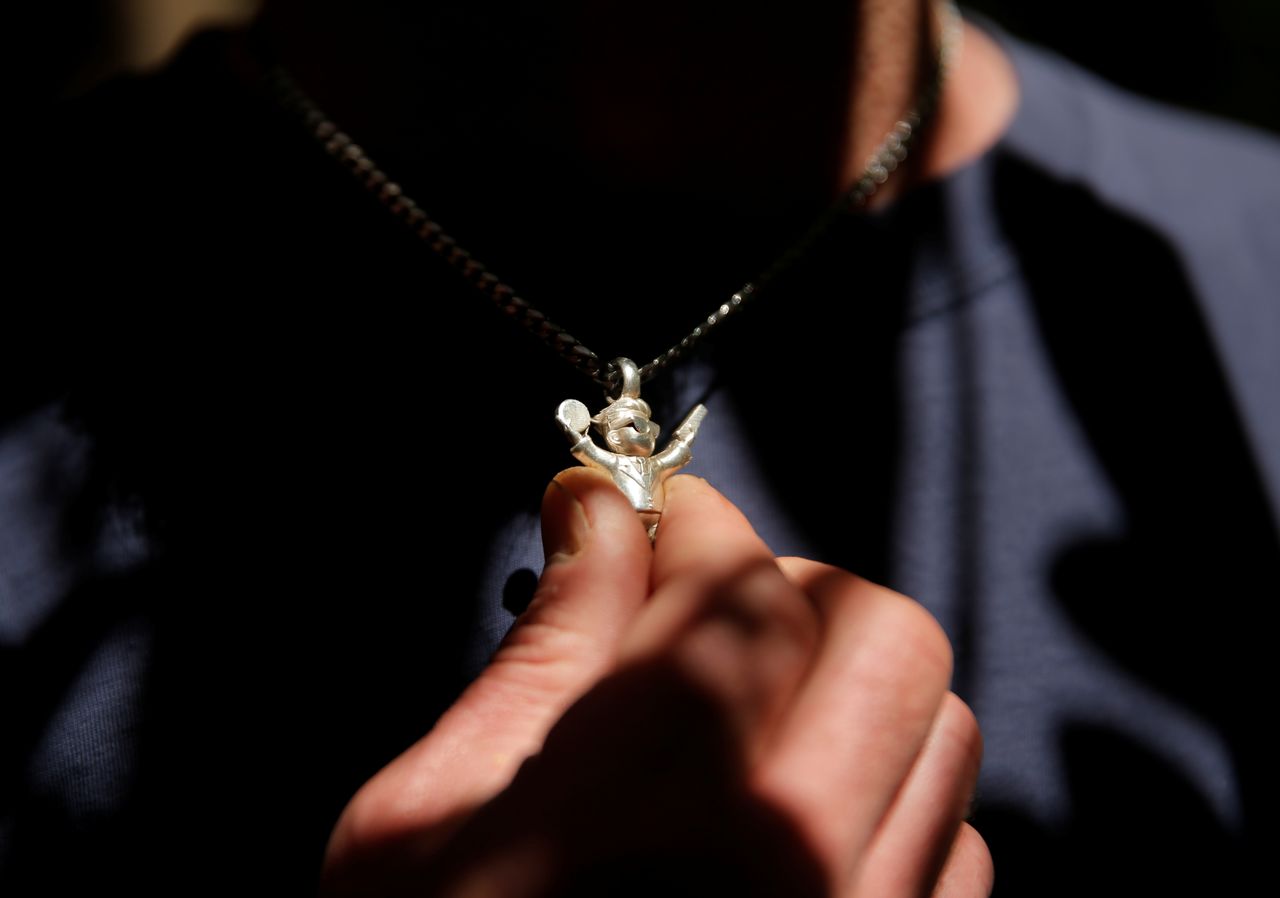