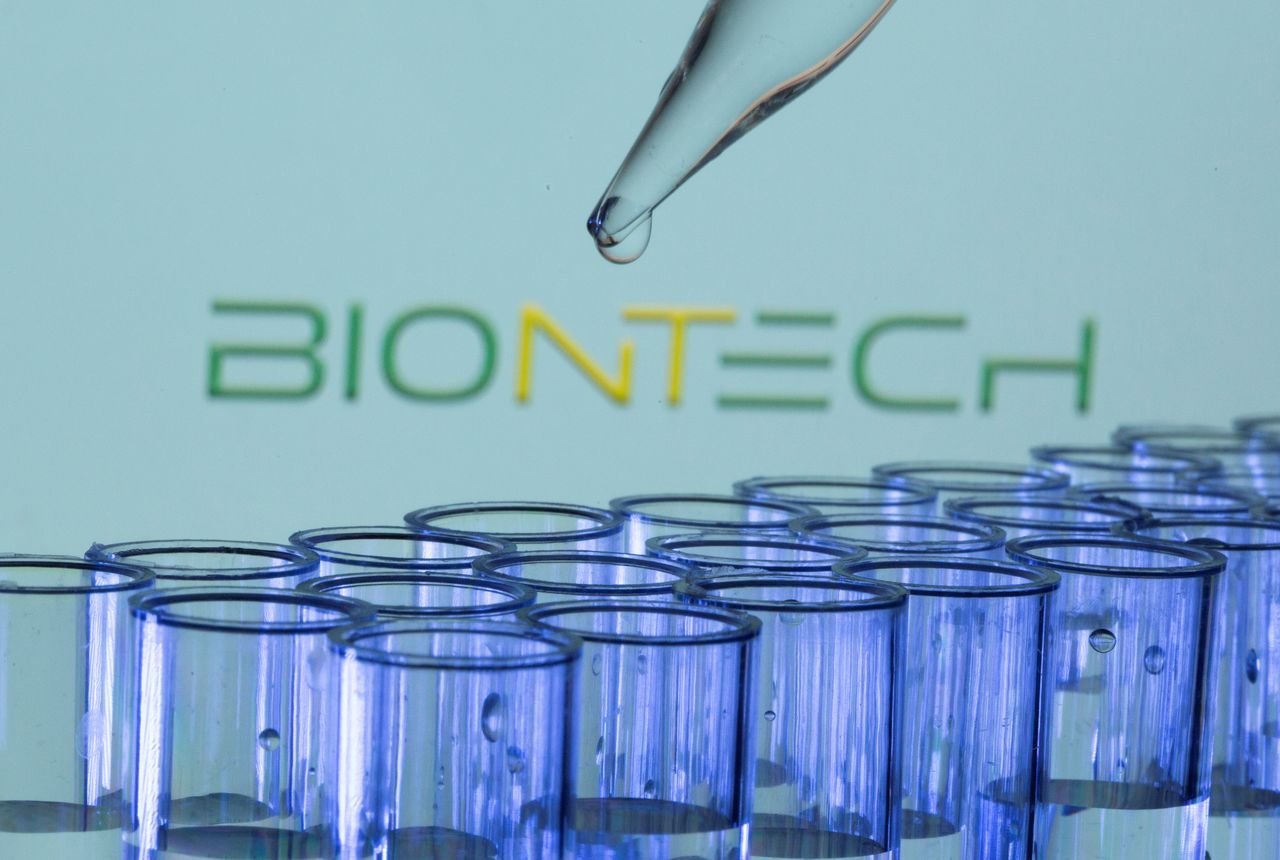 FILE PHOTO: Test tubes are seen in front of a displayed Biontech logo in this illustration taken, May 21, 2021. REUTERS/Dado Ruvic/Illustration

By Yimou Lee and Ben Blanchard

The clause sparked alarm, as such a requirement would be anathema for Taiwan's government, long wary of Beijing's attempts at influence over the democratic island, a source with direct knowledge of the matter told Reuters.

"The other side did propose such a contract template, which made negotiators in Taiwan and the Taiwan government feel puzzled and troubled, but after talks, the other side stopped insisting and adjusted it in a short time," the source said.

Reuters could not determine why Shanghai Fosun Pharmaceutical Group Co Ltd sent the template, and the company did not respond to requests for comment.

But the incident highlights how politics became entangled with a public health issue, laying bare wider disagreements between the governments of China and Taiwan.

The BioNTech issue has challenged China's efforts to project a benign global image through vaccine diplomacy, especially after Taiwan's direct deal with BioNTech collapsed in January.

Shortly after Taiwan President Tsai Ing-wen accused China in late May of blocking her government's deal with BioNTech, Japan and the United States announced they would donate millions of vaccines to the island.

Germany also said it had been helping in Taiwan's talks with BioNTech.

Fosun's contract template, a copy of which was reviewed by Reuters, stipulated that it or its "authorised representatives" should have the right to audit the vaccination process, including checking facilities and reviewing documentation.

It also granted Fosun the right to collect data and interview vaccine recipients, something more akin to a clinical trial than a mass vaccination scheme.

Two other sources briefed on the talks said that personal information was never going to be sent to China, and that the contract was only a template based on a deal signed with Chinese-run Hong Kong. "It was just that - a template" and a starting point for negotiations, one of the sources said. On Sunday, Fosun said an agreement had been signed to provide the vaccines to two Taiwanese tech firms, Foxconn and TSMC. Taiwan's government allowed them last month to negotiate on its behalf, after public pressure about the slow pace of vaccines arriving.

TSMC said the template was not the contract they signed, and declined to comment further.

A representative for Foxconn's billionaire founder Terry Gou, who led a high-profile campaign to buy the vaccines and donate them to Taiwan's government, rejected the idea that the template was a problem, or that detailed data would have been sent to China.

Other data, such as reporting on patients who have serious reactions to vaccine shots, will be closely protected, she said.

China's Taiwan Affairs Office referred Reuters to a faxed statement on June 23 in which it denied seeking to block Taiwan from getting vaccines from overseas.

It said Taiwan's government "on the one hand refuses mainland vaccines and on the other blames it for the lack of vaccines on the island".

BioNTech did not respond to questions about the template contract. Taiwan's Presidential Office did not immediately respond to a request for comment.

China's government had said repeatedly that if Taiwan wanted the BioNTech vaccine it had to do it through Fosun.

Chinese state media has also relentlessly focused on how bad the pandemic was in Taiwan, though even the latest outbreak was relatively small and is now well under control.

The drama has fascinated Taiwan's public and led news coverage for weeks, even as other vaccines directly purchased by the government from AstraZeneca and Moderna arrive.

One Taiwan-based official familiar with the vaccine talks said Taiwan arguably did not need vaccine deliveries as urgently as countries such as Indonesia and Thailand, where the virus is spreading fast.

Moreover, he said, Taiwan's accusations that China earlier obstructed the BioNTech shots worked in Taipei's favour because it prompted Washington and Tokyo into action.

"This was always a political not a health issue," he said.