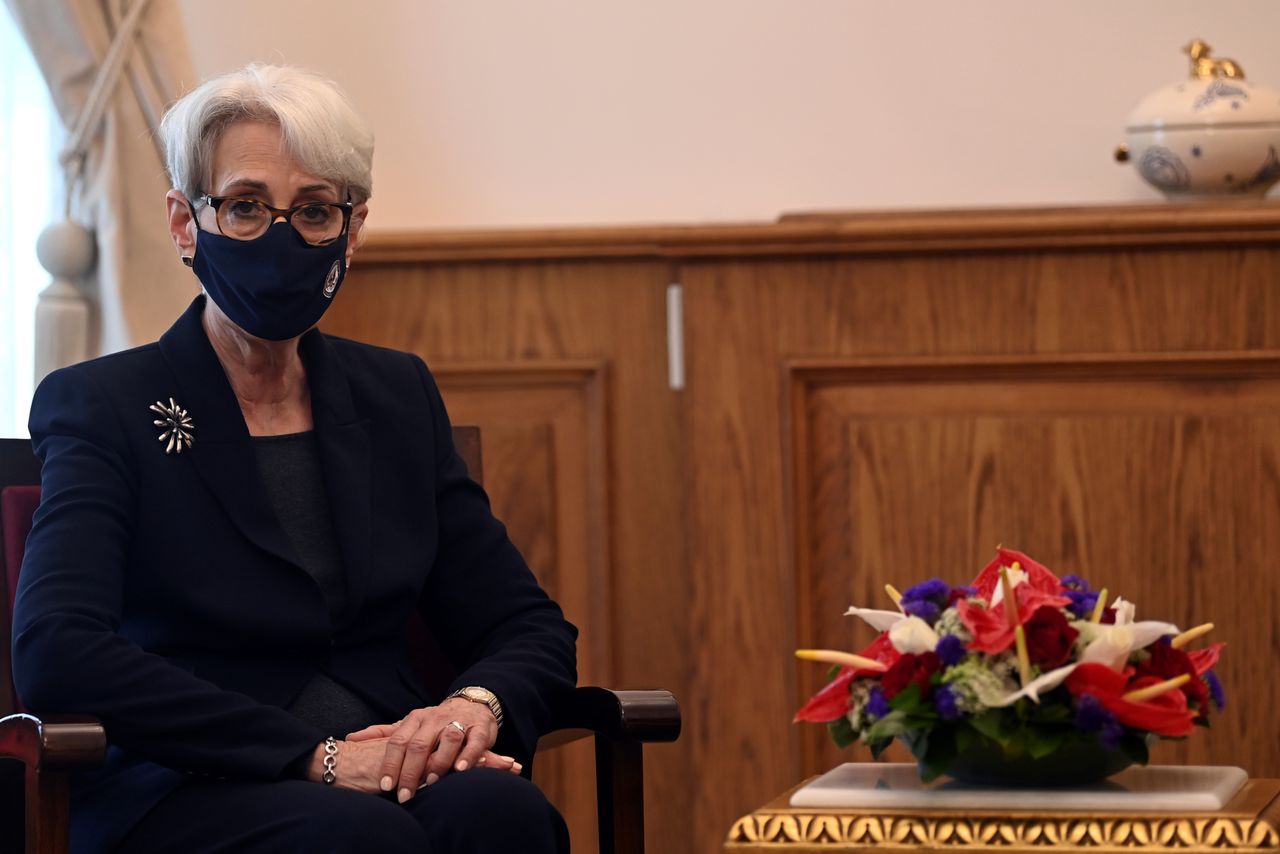 FILE PHOTO: U.S. Deputy Secretary of State Wendy Sherman is seen during her visit to the Orthodox Patriarchate in Istanbul, Turkey May 29, 2021. Ozan Kose/Pool via REUTERS

WASHINGTON (Reuters) - U.S. Deputy Secretary of State Wendy Sherman will visit Japan, South Korea and Mongolia next week, the State Department said, making no mention of any stop in China that had been anticipated in foreign policy circles and reported in some media.

After the State Department announcement on Thursday, sources told Reuters that Washington was preparing to impose sanctions on Friday on Chinese officials over Beijing's crackdown on democracy in Hong Kong and to issue a warning to international businesses operating there about worsening conditions.

President Joe Biden said the situation in Hong Kong was "deteriorating" when asked about plans for the advisory at a news conference with visiting German Chancellor Angela Merkel.

The United States and China are locked in a deeply troubled relationship, having had little high-level, face-to-face contact since a first senior diplomatic meeting under the Biden administration in March in Alaska, where the Chinese side expressed anger at U.S. sanctions announced just ahead of the talks.

Before that meeting, Washington had taken a flurry of actions, including a move to begin revoking Chinese telecoms licenses, subpoenas to multiple Chinese information technology companies over national security concerns, and updated sanctions over Hong Kong.

Sherman's trip will be her second to Asia in less than two months, after visits to Indonesia, Cambodia and Thailand in late May and early June.

The State Department said she would discuss a range of issues with officials in Japan, including the climate crisis and enhancing global health security.

It said Sherman and Japanese and South Korean counterparts would hold a joint meeting to discuss cooperation on North Korea and other issues, including climate change and global health.

She will hold further talks in Seoul before heading to Ulaanbaatar to reinforce the U.S. Mongolia Strategic Partnership, the statement said, adding the trip would run from July 18-25.

It said Sherman would "reaffirm the U.S. commitment to working with allies and partners to promote peace, security, and prosperity in the Indo-Pacific and to upholding the international rules-based order," language the State Department uses to refer to its efforts to push back against China.

On Friday, Biden will take part in a virtual meeting of leaders of the Asia-Pacific trade group, APEC, which will discuss ending the COVID-19 pandemic and supporting the global economic recovery, the White House said.

It said it would be Biden's first engagement with many APEC leaders, particularly those in Southeast Asia, and he would "emphasize the importance he places on the region as well as his vision for a free and open Indo-Pacific."

That meeting came amid concerns among diplomats and others that Washington has not been paying sufficient attention to a region crucial to its strategy to counter China.