TOKYO (Reuters) - Tokyo 2020 sponsor Toyota will not run Olympics-related TV commercials in Japan amid lacklustre public support for the Olympics, with two-thirds of Japanese doubting organisers can keep the Games safe during the COVID-19 pandemic, according to a local media poll.

Toyota Motor Corp Chief Executive Akio Toyoda and other executives will not attend the opening ceremony either, Toyota said on Monday.

"It is true that Toyota will not be attending the opening ceremony, and the decision was made considering various factors including no spectators," a spokesperson said.

"We will not be airing any commercials related to the Games in Japan," she added.

Toyota has already begun airing its Olympic ads on Comcast Corp-owned broadcaster NBC in the United States and will continue to do so during the Olympic and Paralympic Games, according to a statement from Toyota Motor North America.

Some 60 Japanese corporations that have paid more than $3 billion for sponsorship rights to the postponed 2020 Olympics now face a dilemma over whether to tie their brands to an event that has so far failed to win strong public backing.

With just four days before the opening ceremony in Tokyo, 68% of respondents in an Asahi newspaper poll expressed doubt about the ability of Olympic organisers to control coronavirus infections, with 55% saying they were opposed to the Games going ahead.

Three-quarters of the 1,444 people in the telephone survey said they agreed with a decision to ban spectators from events.

As COVID-19 cases rise in Tokyo, now under its fourth state of emergency, public concern has grown that hosting an event with tens of thousands of overseas athletes, officials and journalists could accelerate infection rates in Japan's capital and introduce variants that are more infectious or deadlier.

International Olympic Committee President Thomas Bach has said he hopes the Japanese public will warm to the Games once competition begins and as Japanese athletes begin winning medals. The Tokyo Olympics run July 23 through Aug. 8.

"We will continue to cooperate and work closely with organisers such as Tokyo Metropolitan Government, Tokyo 2020, and the IOC to ensure we have a safe and secure environment for the Games," government spokesperson, Chief Cabinet Secretary Katsunobu Kato said at a regular briefing.

Games officials on Sunday reported the first COVID-19 case among competitors in the athletes' village in Tokyo where 11,000 athletes are expected to stay during the Games. Since July 2, Tokyo 2020 organisers have reported 58 positive cases among athletes, officials and journalists.

Any major outbreak in the village could wreak havoc on competitions because those either infected or isolating would not be able to compete. Olympic officials and individual event organisers have contingency plans to deal with infections among athletes.

A Tokyo 2020 spokesperson said the village was a safe place to stay, adding that the infection rate among athletes and other Games-related people visiting Japan was nearly 0.1%.

On Sunday, six British track and field athletes along with two staff members were forced to isolate after someone on their flight to Japan tested positive.

"Many athletes may have parties or ceremonies before they go to Tokyo where there may be cheering or greeting. So they may also have a risk to get infected in their own countries," said Koji Wada, a professor at Tokyo’s International University of Health and Welfare and an adviser on the government’s coronavirus response.

The latest surge in cases in Tokyo comes after four earlier waves, the deadliest of which was in January. New COVID-19 cases in Tokyo reached 1,410 on Saturday, the most since the start of the year, with new infections exceeding 1,000 for five straight days.

Most of those new cases are among younger people, as Japan has succeeded in getting most of its vulnerable elderly population vaccinated with at least one shot, although only 32% of the overall population has so far received one.

Japanese musician Keigo Oyamada, who described in magazines decades ago how he had bullied his classmates, said on Twitter that he was stepping down as a composer for the Olympics' opening ceremony, in the latest blow to the Games.

Olympics organisers on Monday had rebuffed calls for him to be dismissed.

Other officials have stepped down in the run-up to the Games for inappropriate comments, including the former head of Tokyo 2020, Yoshiro Mori, in February and the creative director for the opening and closing ceremonies, Hiroshi Sasaki, in March.

In the political arena, South Korean President Moon Jae-in said he would not visit Japan for the Games or a first in-person summit with Prime Minister Yoshihide Suga after media reports cited a senior Japanese diplomat making offensive remarks about him.

Monday also brought a warning from the Tokyo 2020 organiser following local media reports of Games-related visitors drinking in downtown Tokyo. In an email, it warned Olympic participants who had completed their 14 days of isolation to comply with Tokyo's emergency declaration rules by staying out of bars serving alcohol or restaurants "illegally" staying open after 8 p.m.

"These incidents have also been raised in the National Diet, and have the potential to severely damage the reputation of the Tokyo 2020 Games and your organisations," it said.

For Tokyo residents already living with those lockdown restrictions, travel on their city's roads became more difficult on Monday as the city readied for the start of the Olympics with new traffic restrictions, including reserved lanes for Olympic officials, athletes and journalists.

Transport authorities also hiked toll charges by 1,000 yen ($9) for private vehicles using the network of elevated expressways that snake through the city in a bid to reduce traffic during the Games. 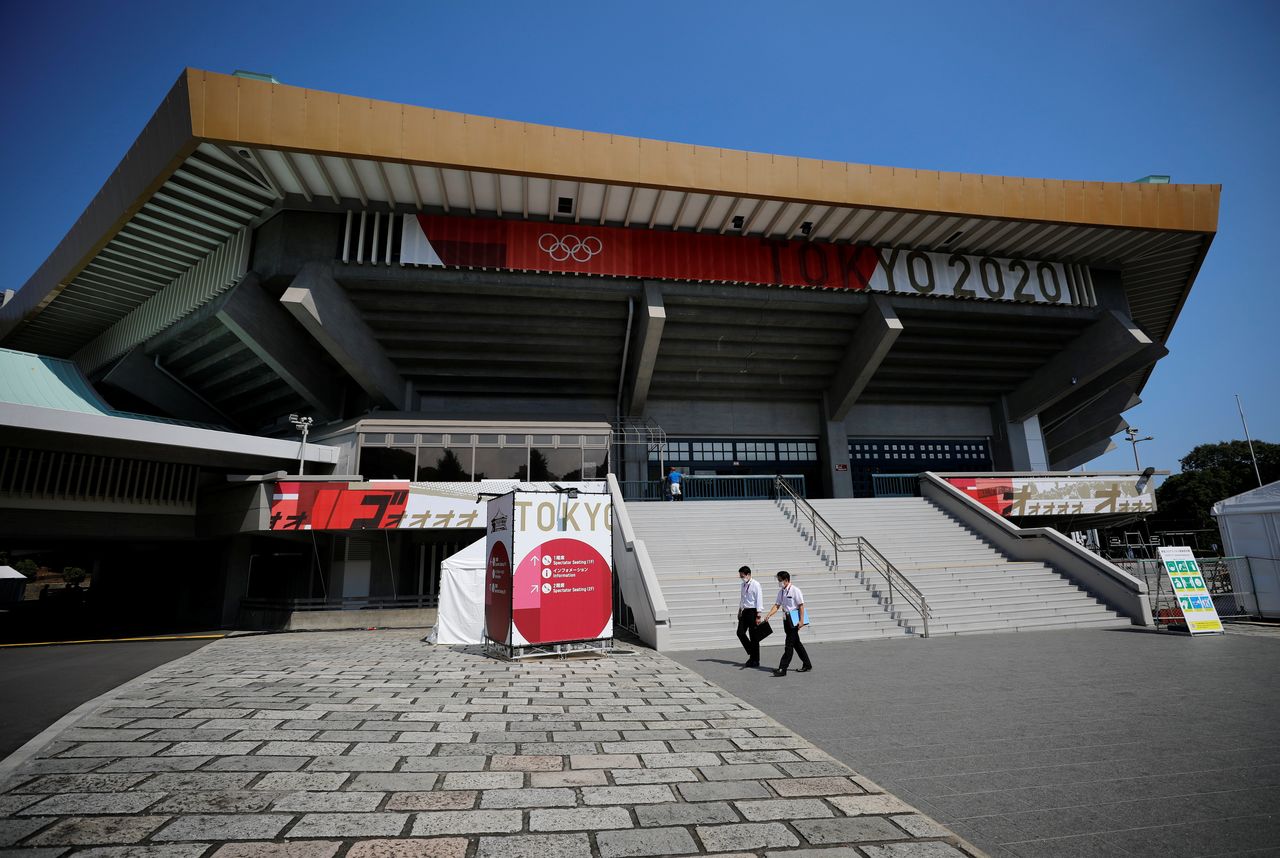 General view of Nippon Budokan arena, the venue of the judo and karate competitions for the Tokyo 2020 Olympic Games, in Tokyo, Japan, July 19, 2021. REUTERS/Issei Kato 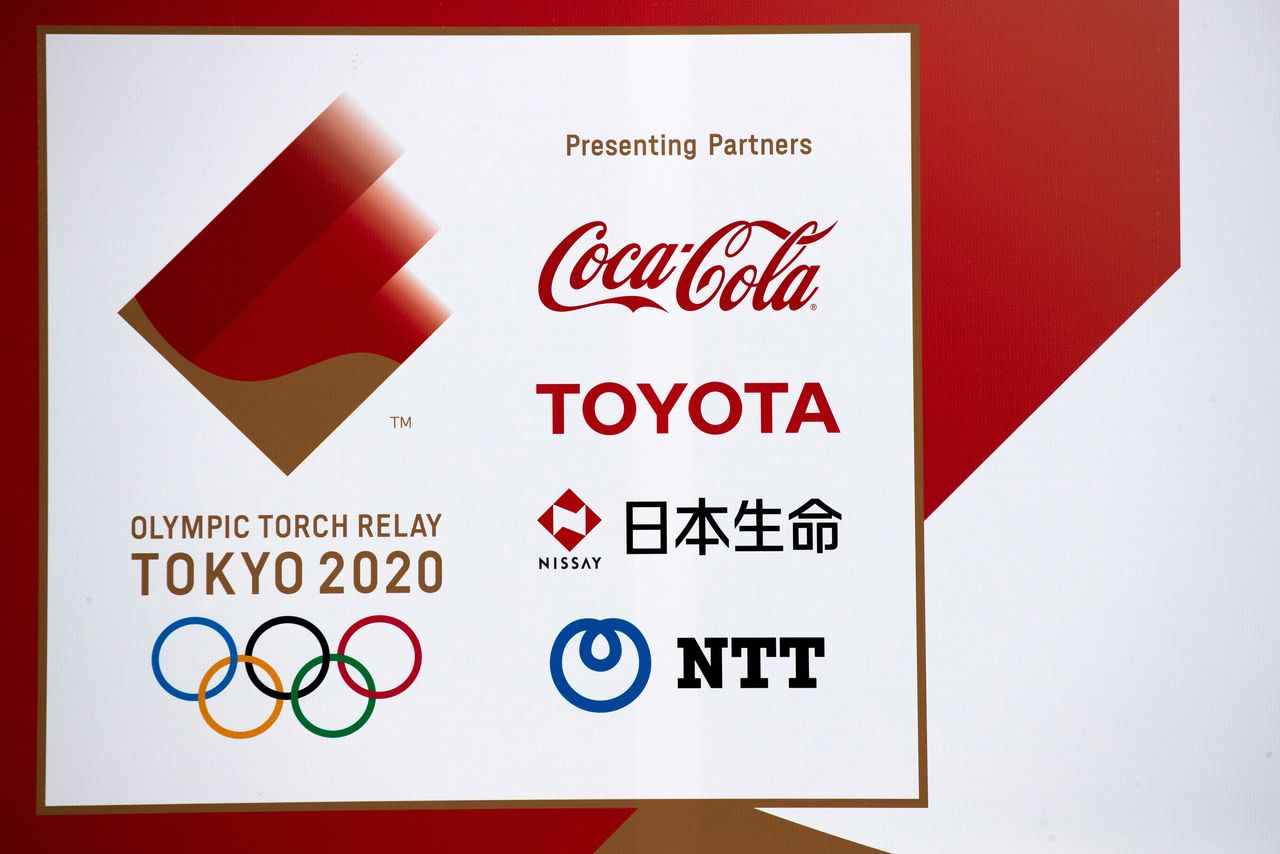 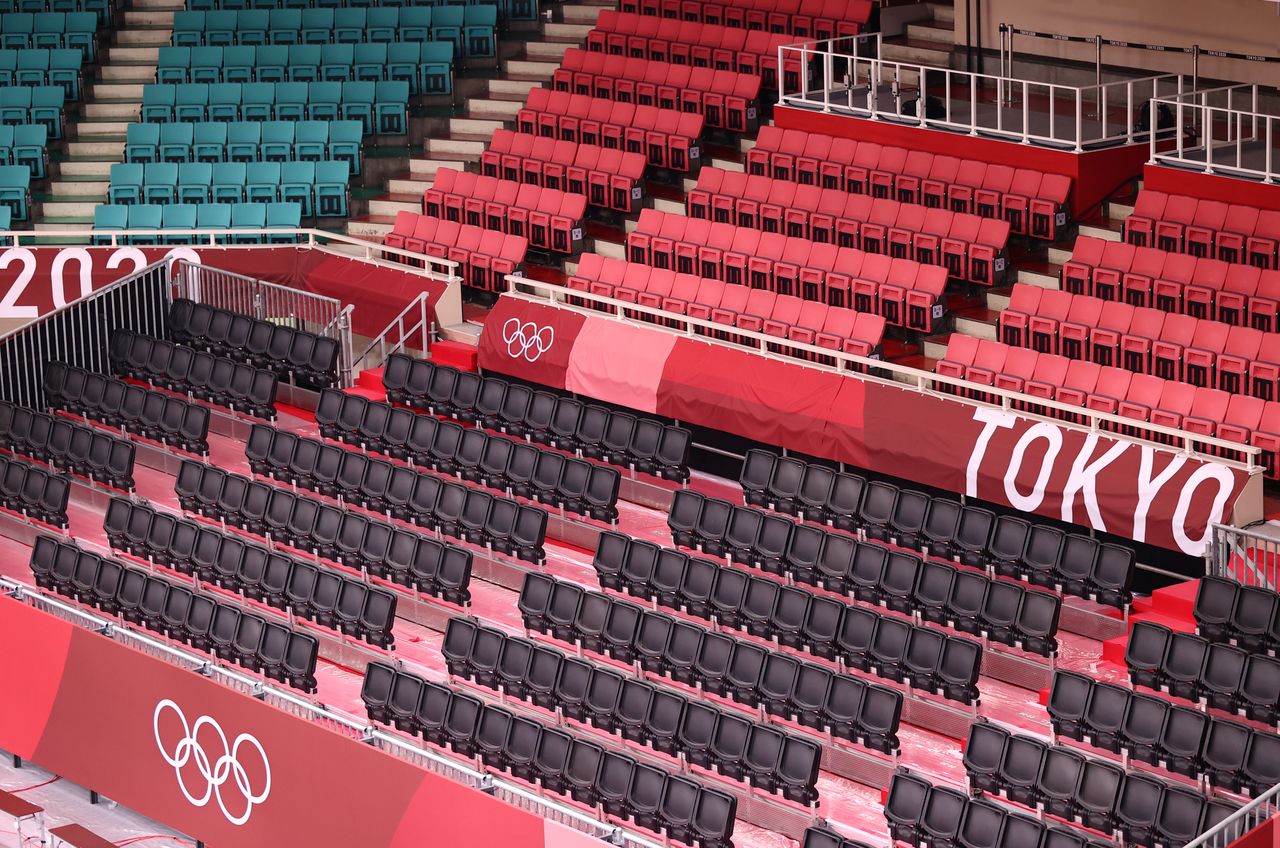 Spectators' seats at the Nippon Budokan arena, the venue of the judo and karate competitions for the Tokyo 2020 Olympic Games, are seen, in Tokyo, Japan, July 19, 2021. REUTERS/Issei Kato 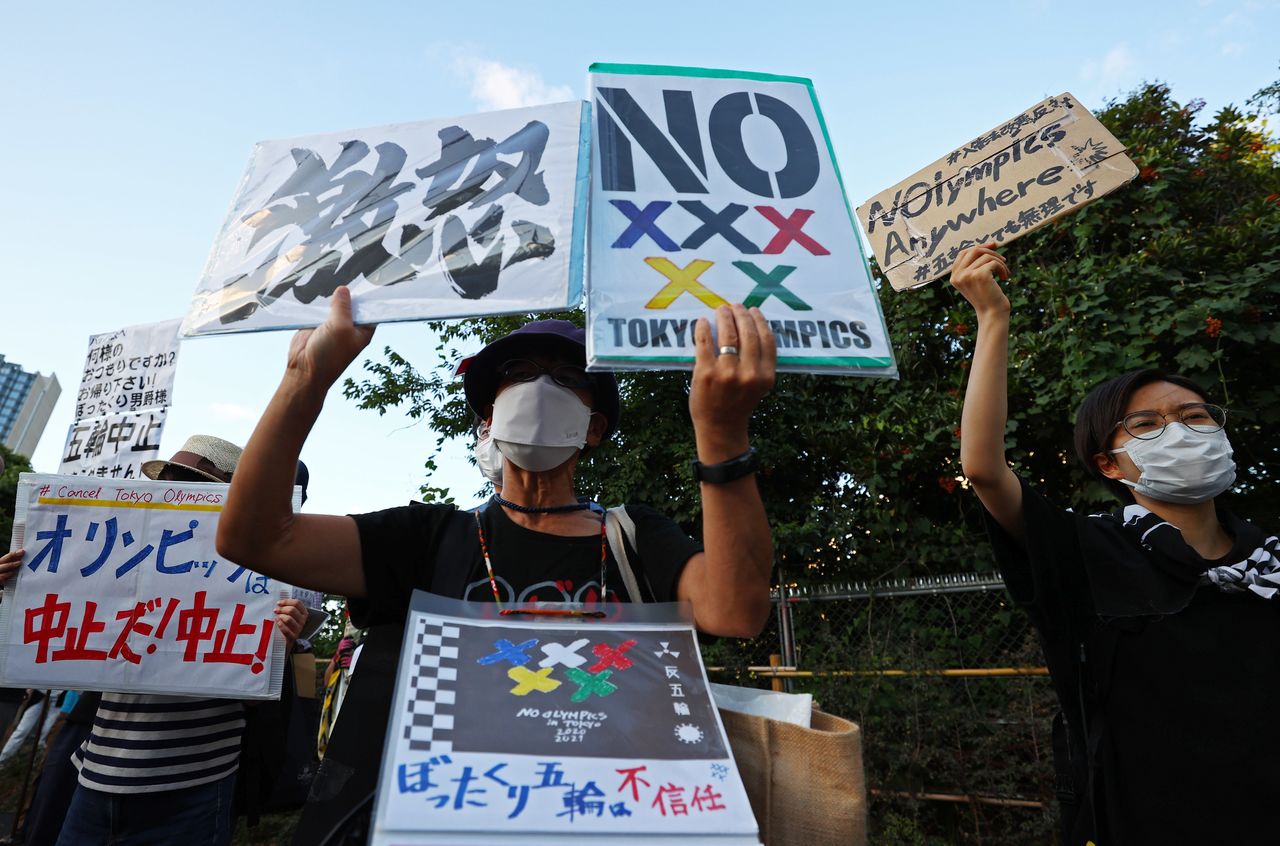 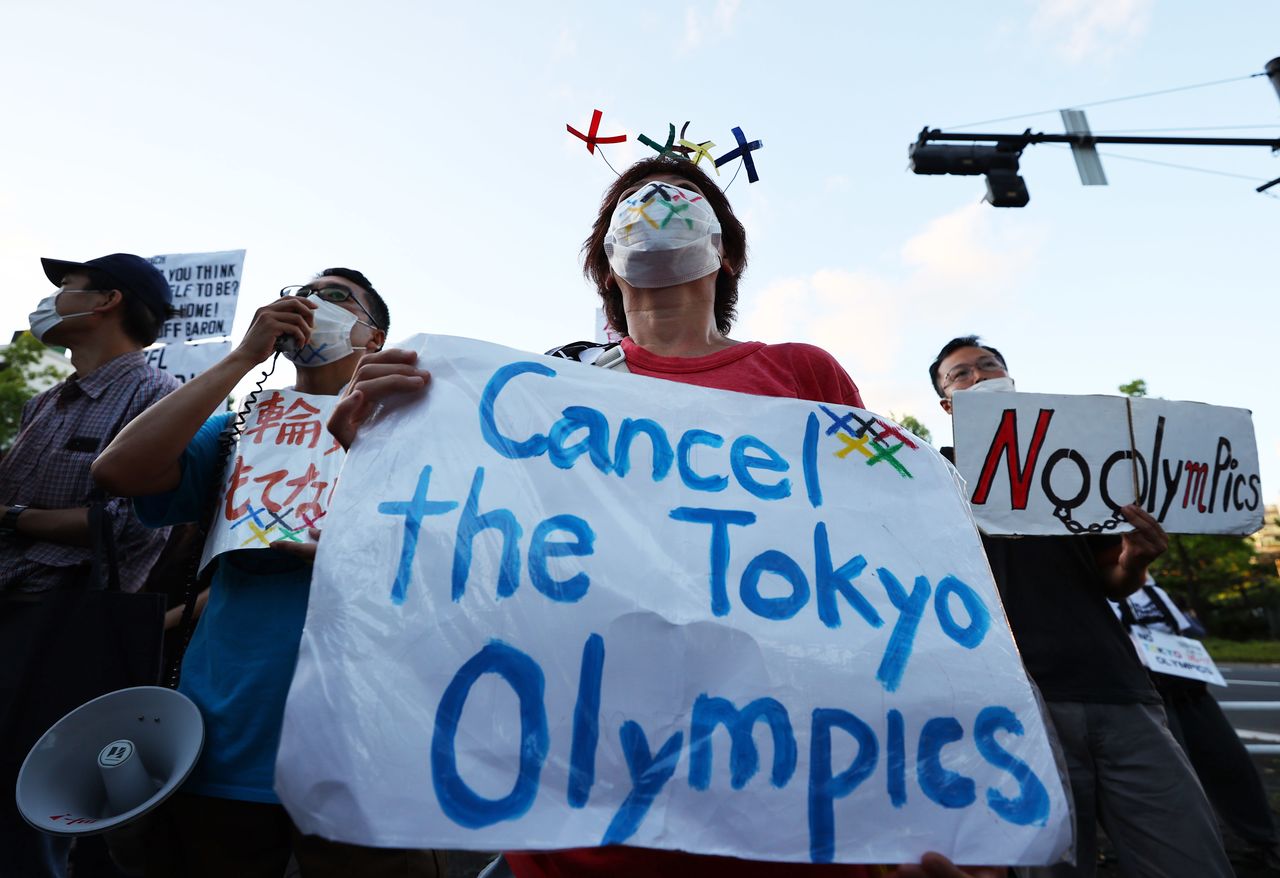