KABUL (Reuters) -Fifteen diplomatic missions and the NATO representative in Afghanistan urged the Taliban on Monday to halt their military offensives, just hours after the insurgents and the Afghan government failed to agree on a ceasefire at talks in Doha.

A delegation of Afghan leaders met the Taliban's political leadership in the Qatari capital over the weekend. But in a statement late on Sunday, the Taliban made no mention of a halt to Afghanistan's escalating violence.

"This Eid al-Adha, the Taliban should lay down their weapons for good and show the world their commitment to the peace process," the 15 missions and the NATO representative said, referring to Tuesday's Muslim holiday in Afghanistan.

Over recent Eid holidays, the Taliban have called short ceasefires, saying they wanted to let Afghans spend them in peace.

This time there has been no such announcement as the Taliban make swift territorial gains in near-unprecedented levels of fighting nationwide as U.S.-led foreign forces complete their withdrawal after 20 years of fighting.

Monday's statement also condemned rights violations, such as efforts to shut schools and media outlets in areas recently captured by the Taliban. The militants have previously denied such actions.

The Taliban said on Monday they had captured the Dehrawood district in Uruzgan province, southwest of Kabul, after heavy clashes with government forces the previous night. Provincial officials confirmed the Taliban advance.

In the northern province of Samangan, security forces managed to wrest Dara-e-Sof Bala district back from insurgents, the military in the area said, adding that 24 Taliban fighters, including a shadow district governor and two commanders, had been killed.

Clashes were going on there on Monday.

Reuters could not independently verify the information provided by the military.

President Ashraf Ghani on Monday visited the provincial capital of Herat province in the west. The Taliban have captured all 17 of the province's districts in recent days barring the capital, Herat city, which is under siege.

In Doha, political leaders and the Taliban discussed a settlement to end the conflict, the chairman of a council for peace Abdullah Abdullah, who took part in the talks, said on Monday.

"We agreed to continue the talks, seek a political settlement to the current crisis, avoid civilian casualties, facilitate humanitarian assistance and medical supplies to tackle COVID-19 pandemic," he said on Twitter.

In a statement late on Sunday, the Taliban said: "Both sides agreed upon the need for expedition in the peace talks, in order to find a fair and permanent solution for the current issue in Afghanistan as soon as possible."

Peace talks between the Taliban and prominent Afghans from the government side started in September last year but have failed to make any progress.

The Taliban's spokesman in Doha, Mohammed Naeem, denied media reports that the insurgent group had agreed to an Eid ceasefire in exchange for the release of its prisoners.

"Ambassador Khalilzad emphasized the urgency of a comprehensive political settlement between the Islamic Republic of Afghanistan and the Taliban," a U.S. Embassy statement said.

Pakistan is considered a key player in the peace process in Afghanistan given Islamabad's historical influence over the Taliban.

The U.S. Embassy statement emphasised that "tangible and material support" for the Afghan peace process was vital for its success. 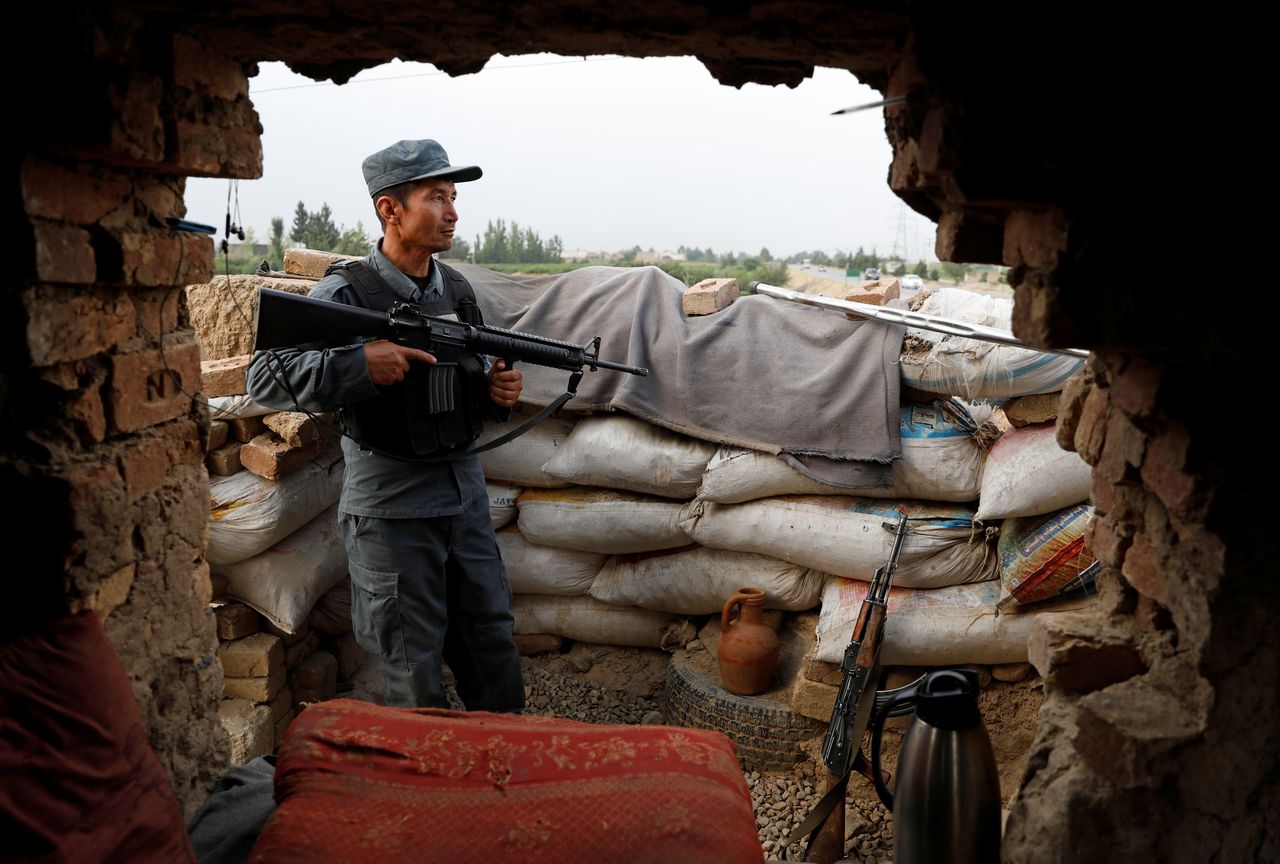 FILE PHOTO: An Afghan policeman keeps watch at the check post on the outskirts of Kabul, Afghanistan July 13, 2021. REUTERS/Mohammad Ismail