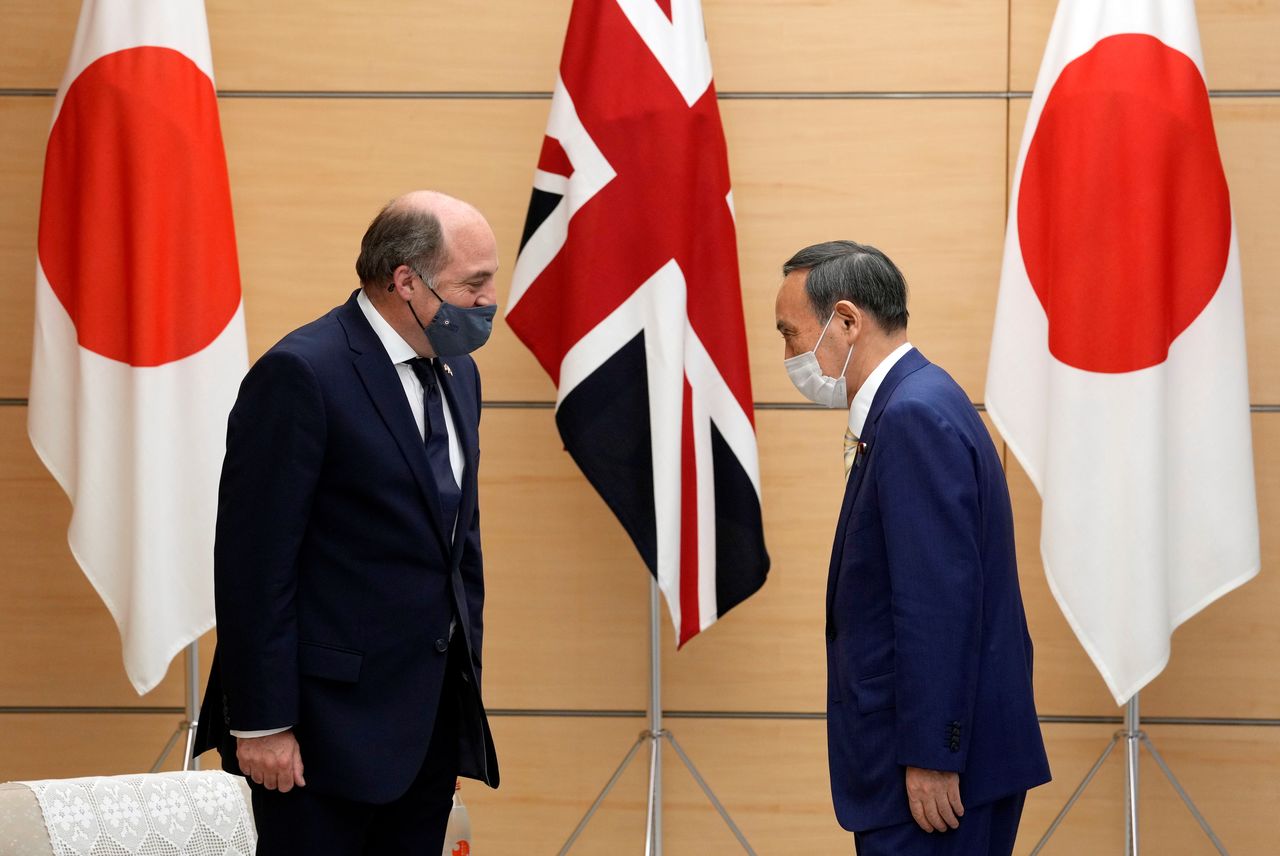 Britain's Defence Secretary Ben Wallace is welcomed by Japan's Prime Minister Yoshihide Suga at the start of their meeting at the prime minister's official residence in Tokyo, Japan, July 20, 2021. Franck Robichon/Pool via REUTERS

TOKYO (Reuters) -Britain said on Tuesday it would permanently deploy two warships in Asian waters after its Queen Elizabeth aircraft carrier and escort ships sail to Japan in September through seas where China is vying for influence with the United States and Japan.

Plans for the high-profile visit by the carrier strike group come as London deepens security ties with Tokyo, which has expressed growing alarm in recent months over China's territorial ambitions in the region, including Taiwan.

"Following on from the strike group's inaugural deployment, the United Kingdom will permanently assign two ships in the region from later this year," Britain's defence minister, Ben Wallace, said in a joint announcement in Tokyo with his Japanese counterpart, Nobuo Kishi.

After their arrival in Japan, Kishi said, the Queen Elizabeth and its escort ships would split up for separate port calls to U.S. and Japanese naval bases along the Japanese archipelago.

In a statement on the deployment, a Pentagon spokesperson congratulated Britain for its "commitment to an inter-connected network of allies and partners, who mutually cooperate and support freedom of navigation and a rules-based order in the Indo-Pacific region."

A close U.S. ally, Japan hosts the biggest concentration of U.S. military forces outside the United States, including ships, aircraft and thousands of Marines.

The British carrier, which is carrying F-35B stealth jets on its maiden voyage, will dock at Yokosuka, the home of Japan's fleet command and the USS Ronald Reagan, the only forward deployed U.S. aircraft carrier.

The British ships will not have a permanent base, a spokesperson at the British Embassy in Tokyo said when asked which ports the Royal Navy ships would operate from.

The Queen Elizabeth is being escorted by two destroyers, two frigates, two support vessels and ships from the United States and the Netherlands.

It will come to Japan through the South China Sea, parts of which are claimed by China and Southeast Asian countries, with stops in India, Singapore and South Korea.

In a further sign of Britain's growing regional engagement, Wallace, who traveled to Japan with a delegation of military commanders, said the UK would also eventually deploy a Littoral Response Group, a unit of marines trained to undertake missions including evacuations and anti-terrorism operations.