By Philip Blenkinsop and Joyce Philippe

BRUSSELS/NEW YORK (Reuters) - While many drinkers may celebrate the easing of pandemic restrictions with a beer or glass of wine, the world's biggest brewers will be urging them to try new zero alcohol lagers.

Having lost market share to craft beers and hard seltzers - or alcoholic fizzy water - top brewers like AB InBev and Heineken are betting on a new generation of non-alcoholic beers to help regain ground by tapping into healthy-living trends.

But the pandemic cancelled business lunches, emptied sports facilities and left no one driving back from parties or bars - all prime territories for sales of zero alcohol drinks.

The ending of restrictions in the United States and Europe is now making it easier for brewers to get drinkers to try out new zero alcohol versions of their top-selling brands - something they believe will be crucial to ramping up sales.

"The main barrier for consumers is expectations, as in that they do not expect it to taste good," said Borja Manso-Salinas, vice president for marketing of the Heineken brand in the United States.

At a sampling session at the Pier 17 concert and dining venue in lower Manhattan this month, Heineken broke that barrier for some passers-by, including Cary Heinz who brought over a regular Heineken from a nearby stand to compare.

"I can't tell the difference. And I'm a real drinker," he said, with a can in each hand.

Previously, many zero beers were effectively cooked to evaporate alcohol, spoiling the taste. Brewers often now use a vacuum chamber so alcohol comes off at a lower temperature and sometimes seek to blend back escaped esters that are central to the flavour.

The world's second largest brewer launched Heineken 0.0 in the United States in 2019 and planned to distribute 10 million free cans last year, but managed less than half that because of the pandemic.

The Dutch brewer believes it is back on track in 2021, with around four million free samples going to offices alone. Other samples are bound for music festivals, apartment buildings and shopping malls.

"Historically, one of the barriers to overcome is taste," said Todd Allen, global marketing vice president of the Budweiser brand.

"It's really important for people to try the product."

In Japan, where nearly 5% of beer sales contain no alcohol, brewers are launching new brands and forecasting steep growth.

However, the United States is almost virgin territory, with zero alcohol's market share just 0.5%, according to Euromonitor.

For the five years to 2025 it sees a near tripling of U.S. non-alcohol beer volumes, far outpacing global expansion of around 60%, helped by new launches and health trends. U.S. beer sales as a whole are seen down 18% over the same period.

Such growth could be vital to the big brewers which have faced battles on two fronts in recent years - from craft brews, now some 12% of U.S. beer, and from hard seltzers, which have doubled U.S. sales each year since the market took off in 2016.

Zero alcohol is different. The major brewers are front-runners rather than late arrivals and their new products may take share from soft drinks rather than the core beer market.

Allen said the category performed proportionately better among the new generation of drinkers, a clear positive.

Brewers highlight beer has "natural" ingredients, unlike many soft drinks. Budweiser Zero campaigns also stress it has no sugar and its calorie count is a third that of regular Bud.

Consumers are no longer just drivers, teetotallers or pregnant women, brewers say, with most also drinking alcohol, but just choosing to abstain according to the occasion.

Brewers see big potential at U.S. sports events, many of which ban alcohol sales towards the end of a game, but also see zero alcohol beer entering new territory.

Trevor Stirling, senior beverage analyst at Bernstein Autonomous, said the key was for brewers to make non-alcoholic beer a lifestyle choice, for example replacing a morning soda at work, rather than just a beer substitute.

"It's a massive opportunity, but difficult to do. They need to change the frame of reference so that, for example, consumers see it less as a beer with no alcohol but a non-alcoholic drink that tastes of beer, an adult soft drink," he said.

Heineken Chief Executive Dolf van den Brink believes non-alcoholic beer could account for about 5% of the global beer market over time. It was around 2% by value in 2020, according to Euromonitor.

"The biggest mistake we could make would be taking our foot off the gas. We're still only early in this journey," he said.

(Reporting by Philip Blenkinsop in Brussels and Joyce Philippe in New York; Editing by Mark Potter) 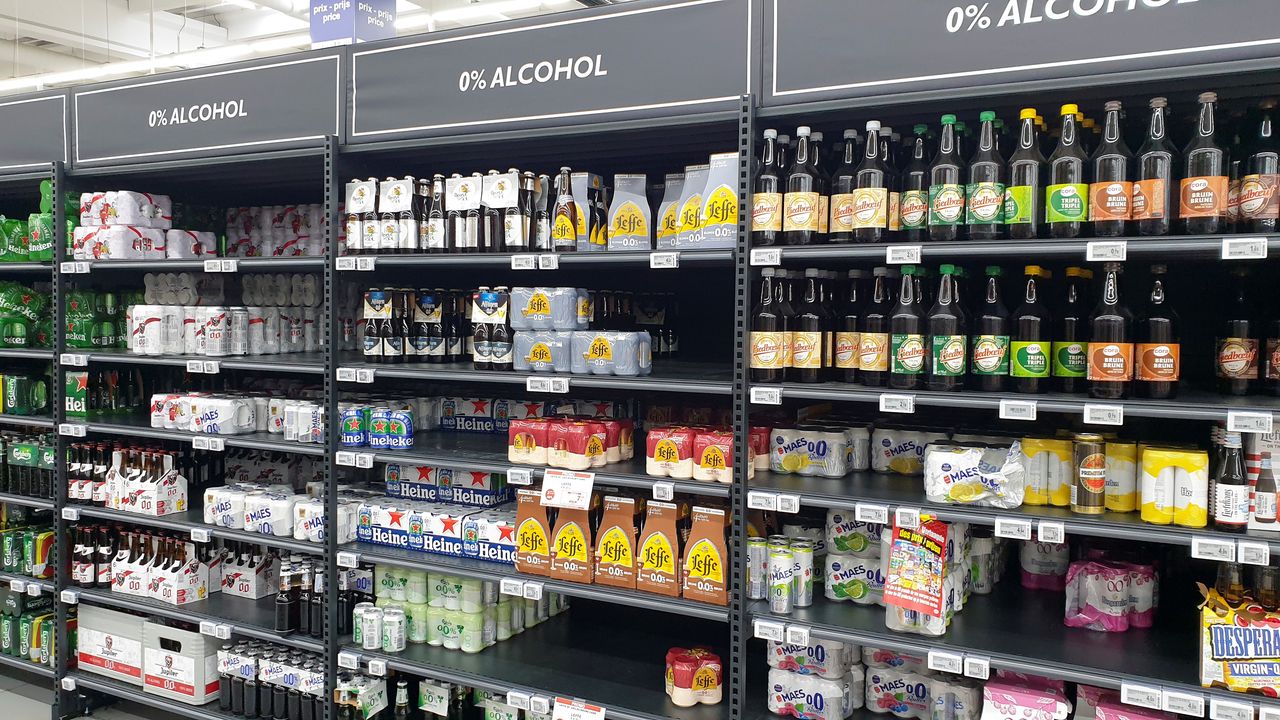 Shelves with non-alcoholic beer are seen at a supermarket in Brussels, Belgium, June 19, 2021. REUTERS/Philip Blenkinsop 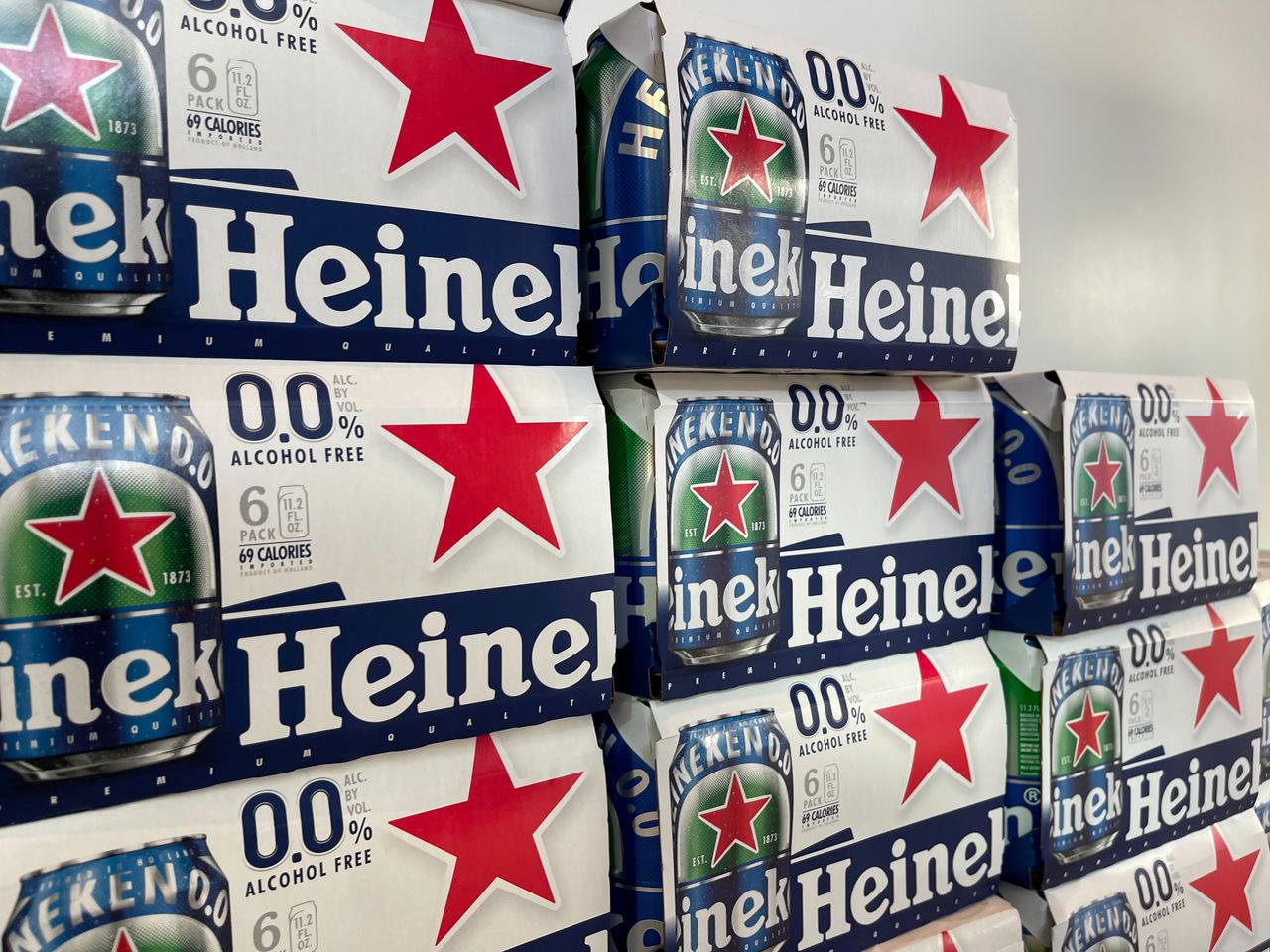 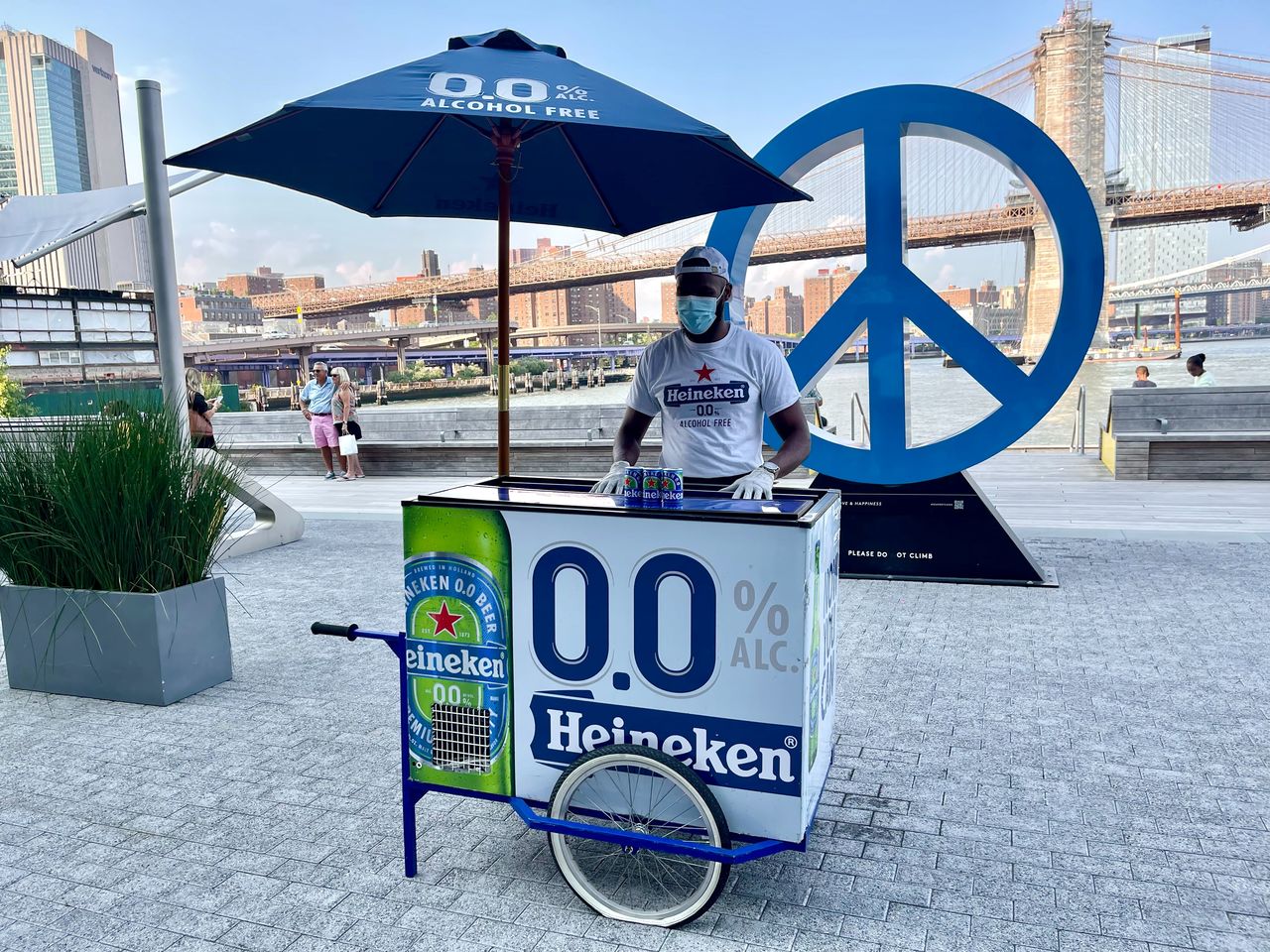 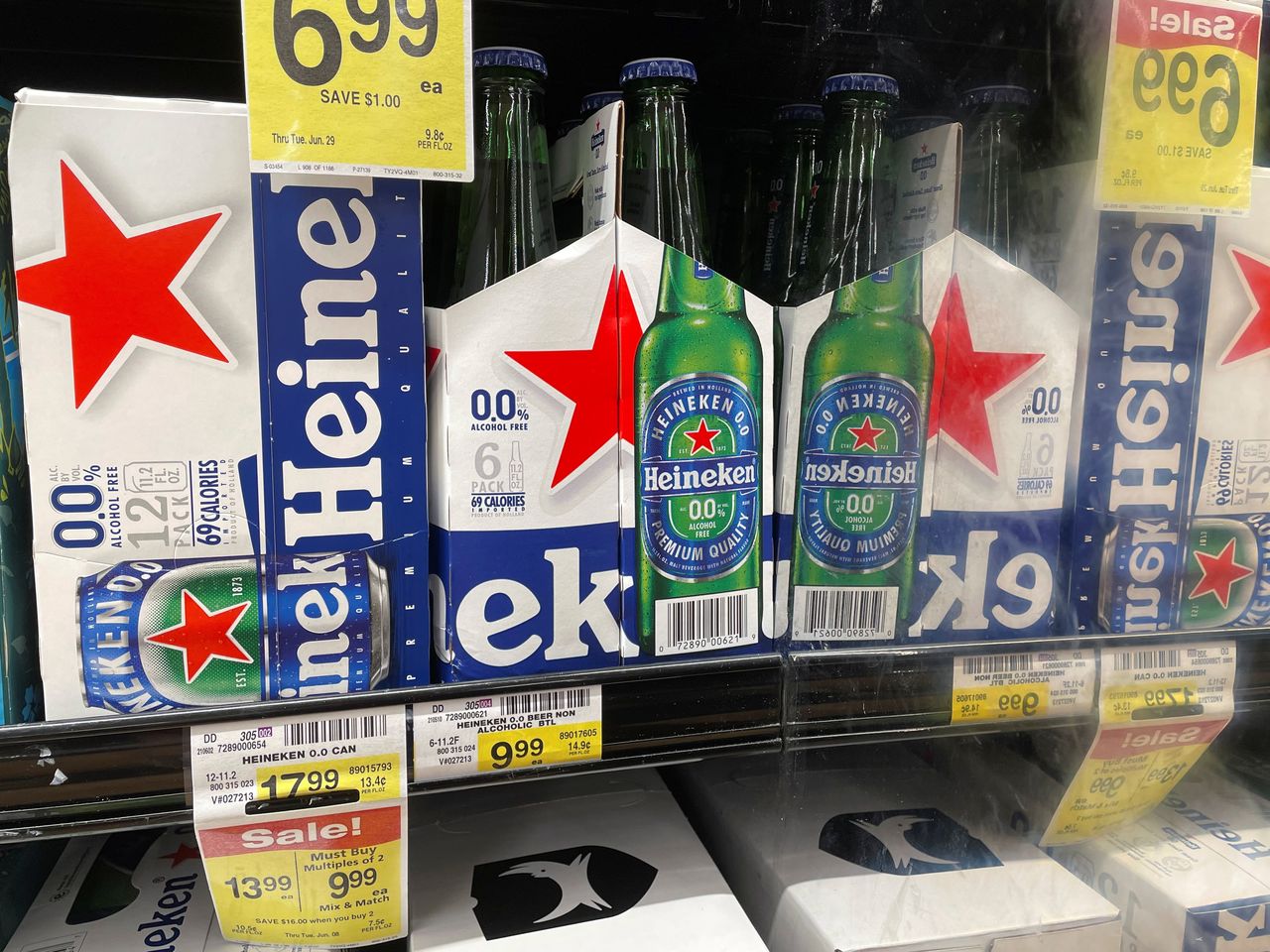 Boxes of Heineken non-alcoholic beer are seen on a shelf at a Jewel-Osco store in Chicago, Illinois, U.S., June 8, 2021. REUTERS/Richa Naidu 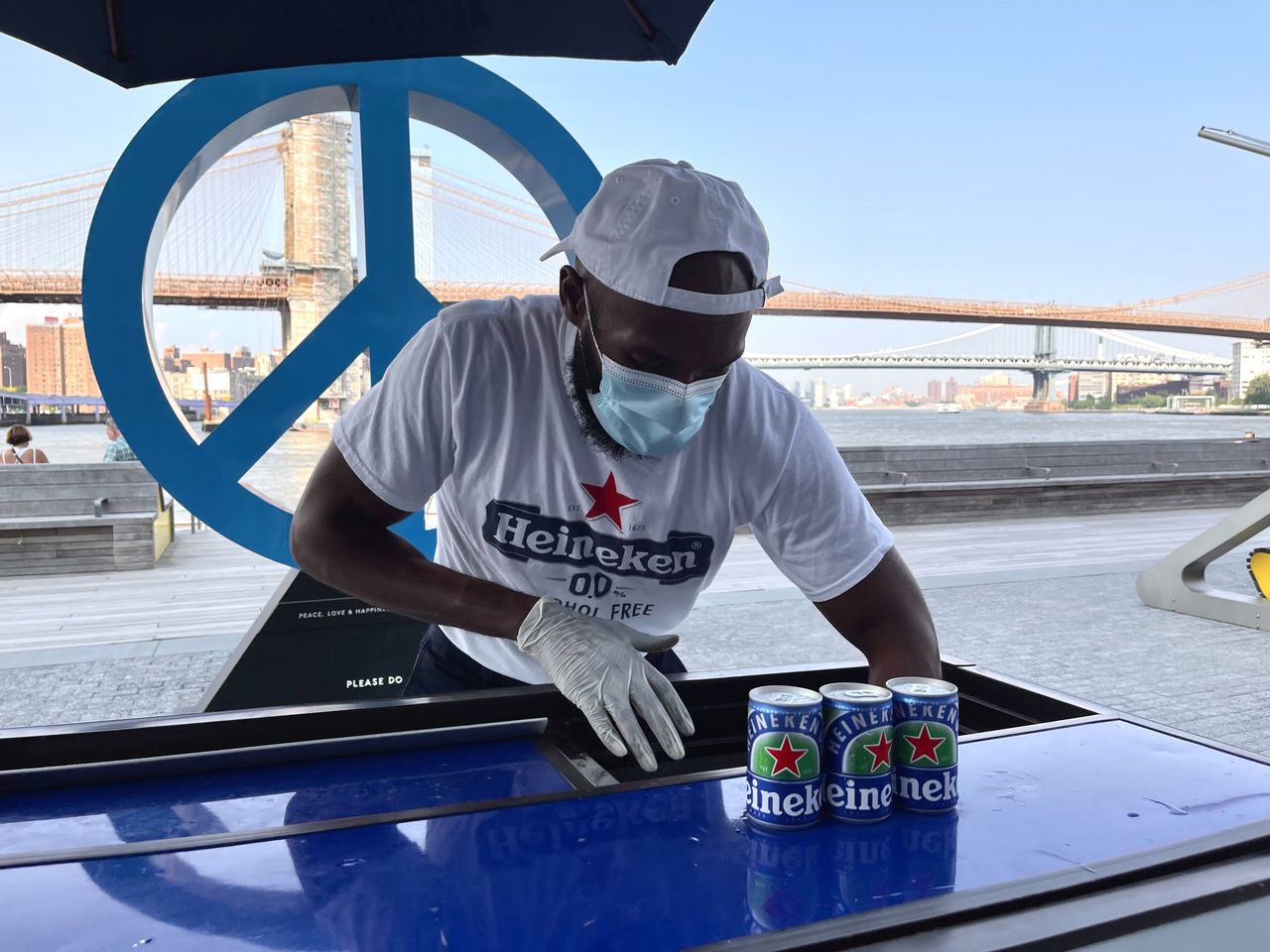