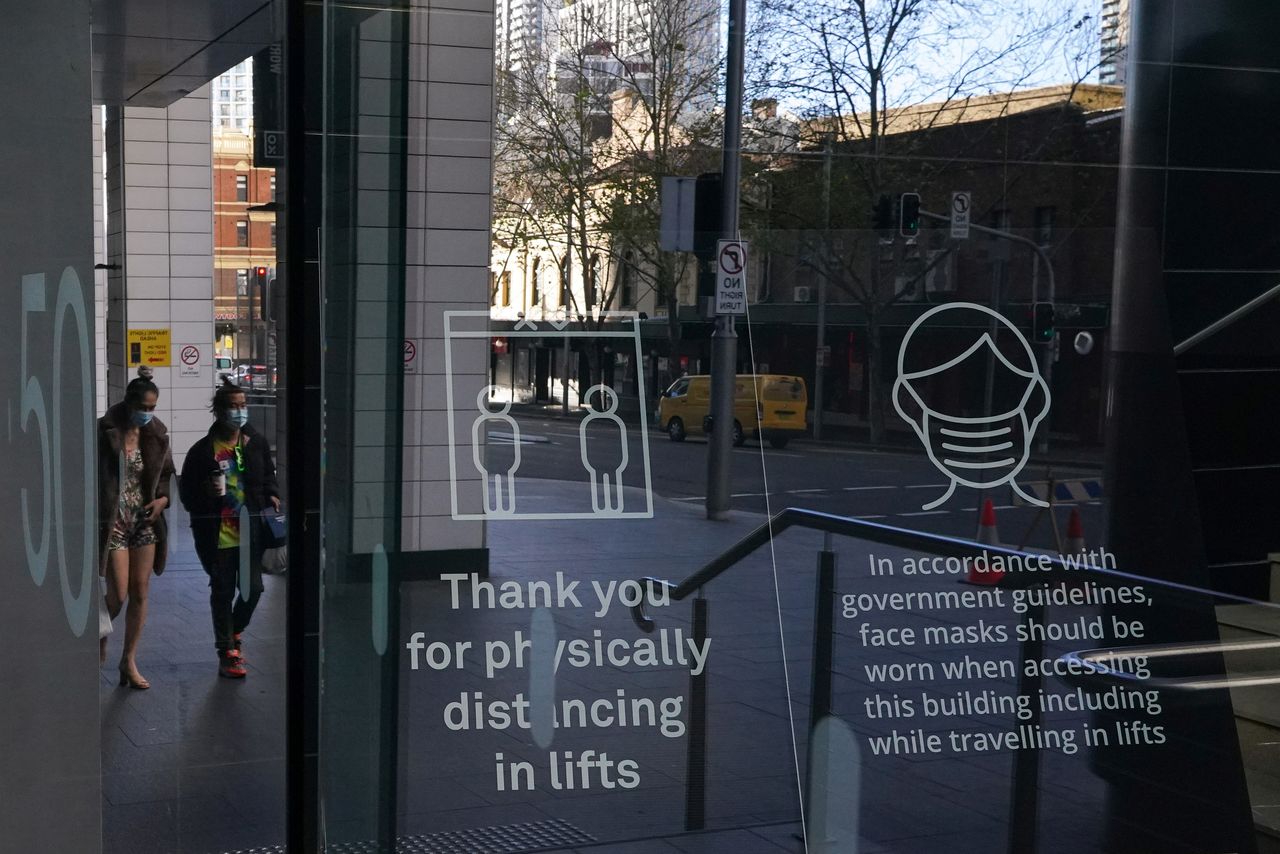 People wearing protective face masks walk past signs in the lobby of a City Centre building outlining public health guidelines during a lockdown to curb the spread of the coronavirus disease (COVID-19) outbreak in Sydney, Australia, July 21, 2021. REUTERS/Loren Elliott

Australia's two largest states reported sharp increases in new COVID-19 cases on Wednesday, a blow to hopes that lockdown restrictions would be lifted with more than half the country's population under stay-at-home orders.

New South Wales state, home to the country's most populous city Sydney, reported 110 new cases, up from 78 the day before, nearly four weeks into a lockdown of the city and surrounding areas to contain an outbreak of the virulent Delta variant.

Victoria state clocked 22 new cases, from nine the day before, its biggest increase since the outbreak began this month, as it nears its second week of statewide lockdown.

South Korea reported a daily record of 1,784 coronavirus cases for Tuesday, breaking a mark set last week, as the authorities struggled to get on top of a surge in outbreaks linked to the Delta variant.

Transmission rates have been kept relatively low across the country despite no lockdowns thanks in part to aggressive testing and tracing, but the fourth wave of infections is proving particularly hard to contain as the unvaccinated fall victim to the Delta strain.

Genetic analysis of 2,381 infections last week found nearly 40% were the Delta variant, the Korea Disease Control and Prevention Agency said on Tuesday. More than half the total 1,741 Delta variant cases since December were diagnosed last week.

The Tokyo Olympics should go ahead to demonstrate to the world what can be achieved with the right plan and measures amid the pandemic, World Health Organisation head Tedros Adhanom Ghebreyesus said on Wednesday.

Speaking to the International Olympic Committee members at their session in the Japanese capital, Tedros said the world needed the Olympics now "as a celebration of hope".

Tedros criticised the vaccine discrepancies between countries, saying the pandemic could be ended if G20 economies showed collective leadership and there was a fairer distribution of vaccines.

India reported its highest death toll in a month on Wednesday - at nearly 4,000 - after its richest state reconciled its death count with 3,509 previously unreported fatalities.

Maharashtra, home to the financial capital of Mumbai, has reported 130,753 of the country's 418,480 coronavirus deaths, and added 3,509 earlier deaths to its tally, the federal health ministry said on Wednesday.

The ministry did not give a reason but authorities have in the past attributed other instances of deaths going unreported due to administrative errors, before the mistakes are discovered and the numbers appear in official data.

Sinopharm's COVID-19 vaccine elicited weaker antibody responses against the Delta variant, based on the first published study of its effect against the more contagious version.

Antibody levels in people receiving Sinopharm's BBIBP-CorV vaccine had a 1.38-fold reduction to the Delta variant versus an older version of the coronavirus first identified in Wuhan, a lab study based on samples from people in Sri Lanka showed.