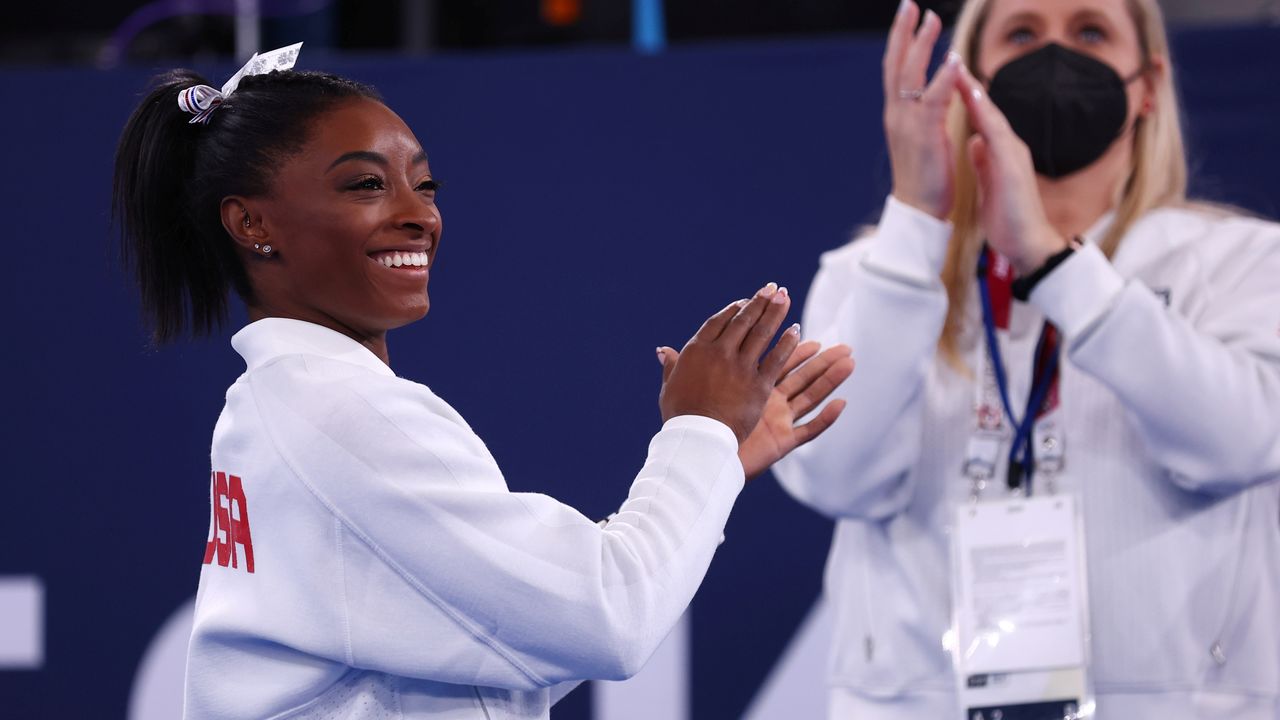 (Reuters) -Support poured in for U.S. gymnast Simone Biles, who dropped out https://www.reuters.com/lifestyle/sports/gymnastics-biles-out-team-event-can-still-get-medal-2021-07-27 of the women’s team final at the Tokyo Summer Games after one disappointing vault, saying she had to focus on her mental health.

The 24-year-old American, who has racked up multiple world and Olympic medals in a spectacular career, later said https://www.reuters.com/lifestyle/sports/olympics-gymnastics-simone-biles-withdrawal-team-final-2021-07-27 that the pressure of living up to expectations had left her no other choice. The U.S. team went on to win silver in the event.

Here are some quotes in response to her decision:

“Simone Biles has withdrawn from the team final competition due to a medical issue. She will be assessed daily to determine medical clearance for future competitions.”

“Simone, you’ve made us so proud. Proud of who you are as a person, teammate and athlete.

“We applaud your decision to prioritize your mental wellness over all else, and offer you the full support and resources of our Team USA community as you navigate the journey ahead.”

“Thank you @Simone_Biles for being a role model and showing the world it’s okay to prioritize your mental health. Looking forward to following along in your future endeavors!”

ROBERT ANDREWS, MENTAL TRAINING EXPERT WHO HAS WORKED WITH BILES FOR ABOUT FOUR YEARS

“Gymnastics probably more than any other sport... requires laser, pinpoint focus... Being a global presence, the greatest of all time, all that starts creating interference... If she’s this stressed out to where she has a mental block, I would approach it with caution.”

“That was a huge thing. When I was told that I had to put my grips on, I was just like O-M-G. Those were definitely some big shoes that I had to fill and I’m very happy that I was able to do that. Yes, she is the GOAT (‘Greatest Of All Time’). I was able to show the world that not only can you fill amazing people’s shoes but we also did this together as well.”

“We were all so stressed. We honestly didn’t know in that moment. She’s freaking Simone Biles. She carries the team basically. When we kind of had to step up to the plate and do what we had to do, it was very hard and stressful. But I’m very proud of us because we did that.”

“This is very unusual for her, but if you’re under a lot of pressure it can affect your body... I think she decided to save her body for later this week, for the all-around and apparatus.”

“Gratitude and support are what @Simone_Biles deserves. Still the GOAT and we are all just lucky to be able to see her in action.”

“I feel sick to my stomach. It’s horrible. I know that all of these athletes dream of this moment for their whole entire lives and so I’m just completely devastated and obviously so worried and just hoping Simone’s OK.

“I’m also thinking about the mental impact this has to have on Simone. It’s just so much pressure and I’ve been watching how much pressure has been on her the months leading up to the Games and it’s just devastating. I feel horrible.”

“Just a friendly reminder: Olympic athletes are human & they’re doing the best they can. It’s REALLY hard to peak at the right moment & do the routine of your life under such pressure.”

KARL-ANTHONY TOWNS, PLAYER FOR THE MINNESOTA TIMBERWOLVES OF THE NATIONAL BASKETBALL ASSOCIATION

“Sending nothing but love and positivity to the @Simone_Biles”

“I can’t imagine the pressure Simone has been feeling. Sending her SO much love. It easy to forget she’s still human. WE LOVE YOU.”

“We are not used to seeing Simone Biles like this. I would like to say that it is not easy because she is Simone Biles and everyone is watching her.

“She took down the difficulty not to hurt herself. And I think she did the right thing. It’s so difficult psychologically for her. I think she doesn’t even think any more about what she needs to do. She thinks what she might do wrong. And this destabilized her.”

“Don’t know about you but I think @Simone_Biles just empowered everyone to put their mental well-being above everything else. WHAT A QUEEN. GOAT in more ways than one.”

MANNY PACQUIAO, FILIPINO BOXER AND SENATOR OF THE PHILIPPINES

“Once a champion, always a champion. God Bless @Simone_Biles.”

“@Simone_Biles keep whipping out that smile of yours cause it is undeniably golden. Always.”

“My father was the ultimate high achiever. He also struggled w mental health his entire life. So when I see @Simone_Biles voicing her own struggles, it gives me hope, not despair. Hope because it will move the ball forward to removing the stigma that is obviously still there.”

“Super proud of USA gymnast @Simone_Biles for prioritizing mental health over achievement. Too often we push ourselves too far thinking that’s what is required to be loved and happy. However, sometimes it’s not about another metal or award - it’s about being human and breathing.”