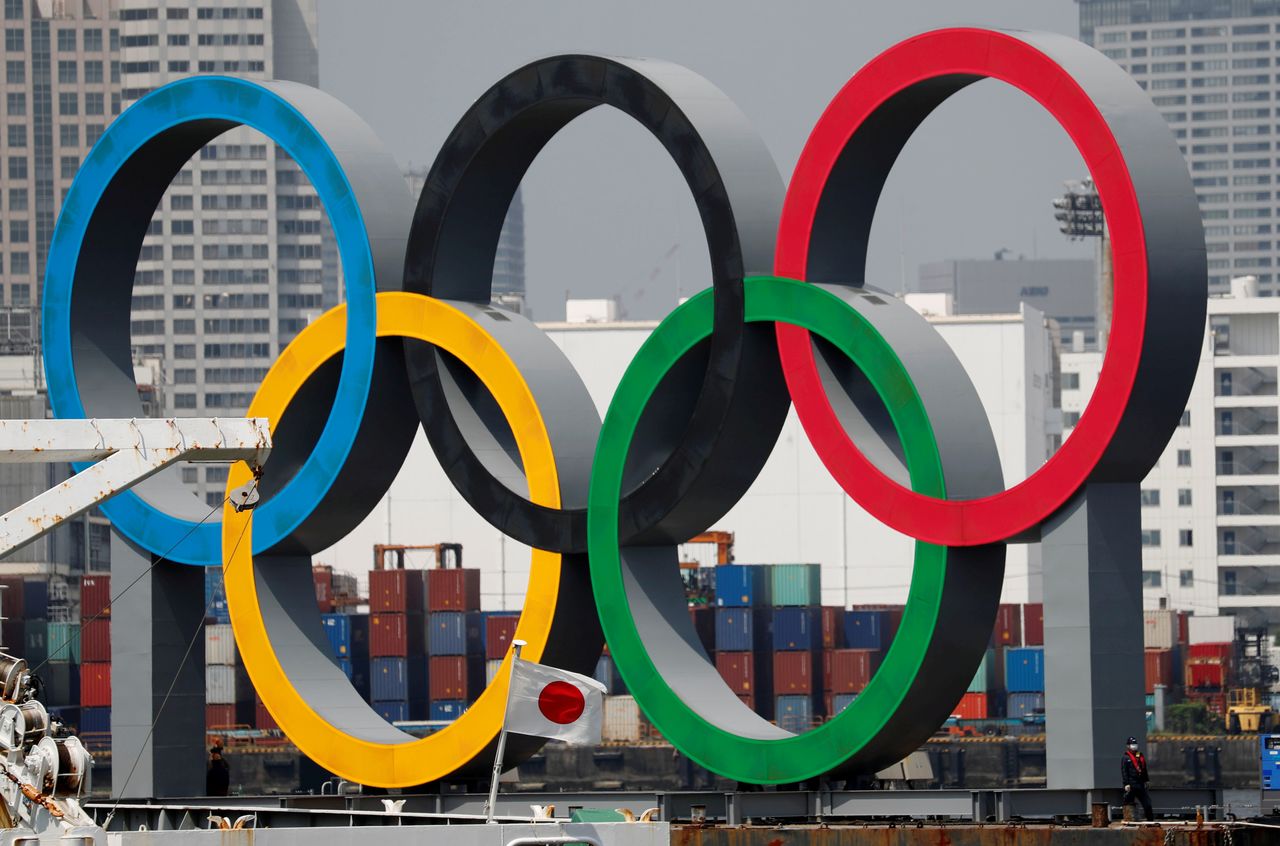 FILE PHOTO: The giant Olympic rings, which are being temporarily removed for maintenance, are seen behind Japan's national flag, amid the coronavirus disease (COVID-19) outbreak, at the waterfront area at Odaiba Marine Park in Tokyo, Japan August 6, 2020. REUTERS/Kim Kyung-Hoon/File Photo

WASHINGTON (Reuters) -A bipartisan panel in the U.S. Congress on Tuesday blasted U.S.-based corporate sponsors of the 2022 Beijing Winter Olympics, including Coca-Cola, Visa Inc and Airbnb, accusing them of putting profits ahead of accusations of genocide in China.

Republican Representative Chris Smith said in a hearing of the Congressional-Executive Commission on China that the sponsors needed to reconcile their "ostensible commitment to human rights" with subsidizing an Olympics where the host country is "actively committing human rights abuses."

Smith asked each of the executives representing Airbnb, Coca-Cola, Intel, Visa Inc and Procter & Gamble whether the Beijing Olympics should be relocated or postponed due to concerns over human rights violations. All of them declined to opine, or said they had no responsibility over site selection.

"We do not make decisions on these host locations. We support and follow the athletes wherever they compete," said Paul Lalli, Coca-Cola's global vice president for human rights.

When asked about the U.S. government determination that China was committing a genocide against Uyghurs and other Muslim minority groups, only Steve Rodgers, executive vice president and general counsel for Intel, said he believed it.

Other executives said they respected the U.S. government's conclusions, but would not weigh in on the matter.

The executives represent the five U.S. companies that have sponsorship commitments running through the Beijing Games under the official Olympic Partner (TOP) Program.

Rights groups, researchers, former residents and some Western lawmakers and officials say Chinese authorities have facilitated forced labor by detaining around one million Uyghurs and other primarily Muslim minorities in camps since 2016.

President Joe Biden's administration agreed with a determination by the former Trump administration that the detention camps and other abuses amounted to genocide.

Liu Pengyu, spokesman for China's embassy in Washington, said the commission was "obsessed with making up all sorts of lies to vilify China" and that China had every confidence it would host an outstanding Olympic event.

Cotton called testimony at the hearing "pathetic and disgraceful."

"Obviously, every one of you, with the exception on occasion of Mr. Rodgers, was sent here with orders not to say anything that could offend the Chinese Communist Party," he said.

Democratic Representative Tom Malinowski rebuked David Holyoke, Airbnb's head of Olympics and Paralympics partnership, for not being more outspoken about criticism toward the Chinese government that it has prevented Uyghurs and Tibetans from obtaining passports and identification cards that would allow them to travel freely and register at hotels.

"In China we are required to follow local laws and regulations," Holyoke said, adding that "human rights are core to our values."

"You're just completely absolving yourself of responsibility for being complicit in abject discrimination," Malinowski said.

Asked repeatedly by Malinowski if Coca-Cola would specifically condemn any Chinese government abuses against Uyghurs, Lalli said without mentioning China: "We respect all human rights."

Malinowski noted that Coca-Cola was willing to wade into U.S. politics and condemn voting rights restrictions in its home state of Georgia, but would not criticize China's government.

"You are afraid of them in a way that you are not afraid of critics in the United States. I think that's shameful," Malinowski told Lalli, adding that it was "absolutely clear" that the company refused to criticize Beijing for fear it would harm its profits in China.