Olympics-Six days into the Tokyo Games, athletes are returning home 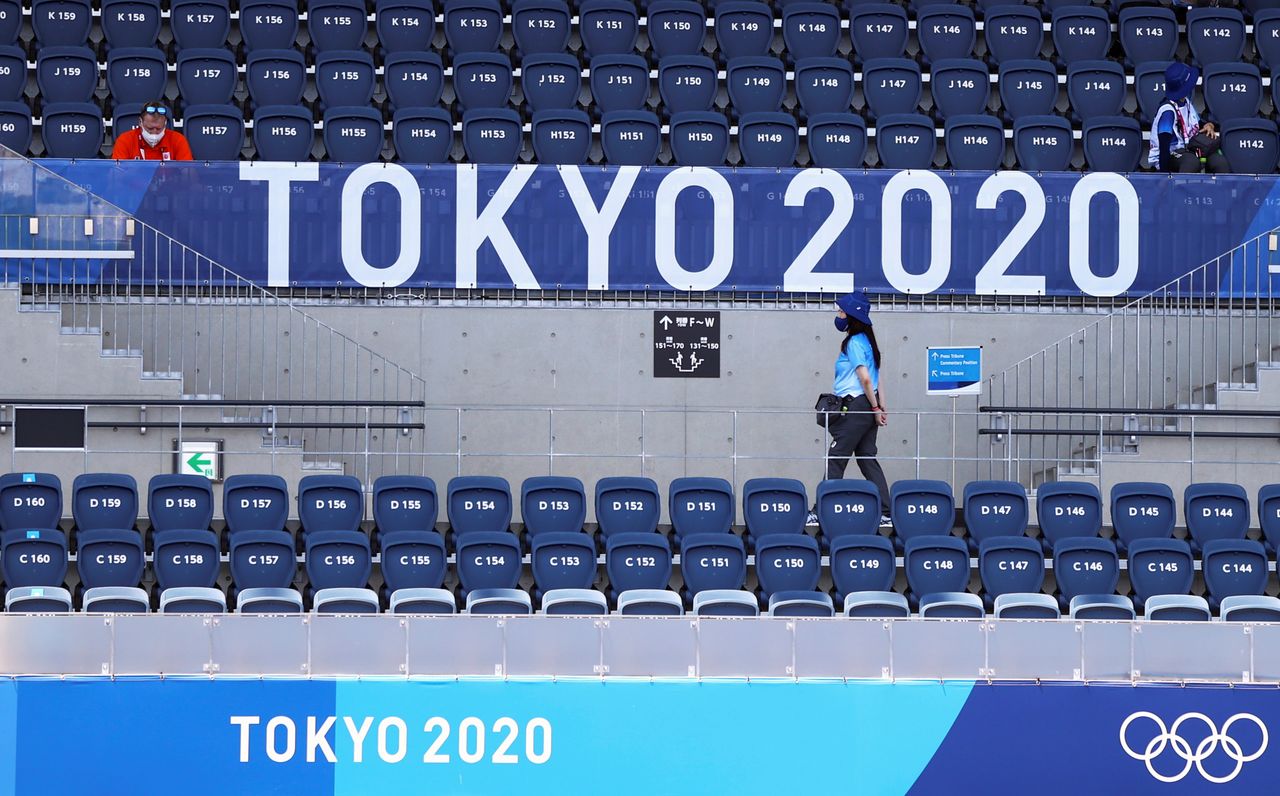 FILE PHOTO: A spectator sits as a volunteer walks beaneath a logo during the Tokyo 2020 Olympic Games in at the Oi Hockey Stadium in Tokyo, Japan, July 24, 2021. REUTERS/Siphiwe Sibeko

TOKYO (Reuters) - It has only been six days since the opening of the Tokyo Olympic Games but already athletes are starting their return trips as strict COVID-19 measures in Japan forbid any extended stays to soak up more of the Games atmosphere.

Teams normally stay on for a few days after their events have ended to take in the closing ceremony celebrations, watch other sports and party with other athletes.

This time, however, stringent health measures are forcing a quick return home well before the end of the July 23-Aug. 8 sports extravaganza.

Athletes must arrive no earlier than five days before their competition starts and fly back within 48 hours of completing their sports to minimise the risk of infection and the spread of the virus among the local population.

Australia’s softball team departed for Sydney on Wednesday, as part of the first group of Team Australia’s athletes to leave Tokyo, and will go into a 14-day quarantine back home.

“While the team is vaccinated and have been tested every day while at the Games, like every returning Australian, they will remain in quarantine for 14 days and will undergo regular testing,” Australian Olympic Committee Chief Executive Matt Carroll said.

“The team return and quarantine has been an integral part of our planning for these Games.”

By next weekend, some 250 Australian athletes and officials of a team of more than 850 will be back home.

For German kayak gold medallist Ricarda Funk, who is leaving on Thursday, the Games were a huge success but she barely had time to soak up the atmosphere at the athletes’ village, usually known for its active social life as more than 10,000 athletes from more than 200 countries live there.

“It’s definitely sad because these are my first Olympic Games and I really wanted to enjoy the Olympic Village and the Olympic feeling a bit more,” Funk said.

“Especially because in the first days I was focusing on the competition and I couldn’t really relax. So in my last day here I’m trying to really take it all in.”

Athletics, the biggest sport at the Games in terms of the number of athletes taking part, does not start until Friday.

The Games were postponed last year due to the pandemic and opinion polls have consistently shown that the majority of Japanese are against holding the Games during the pandemic.