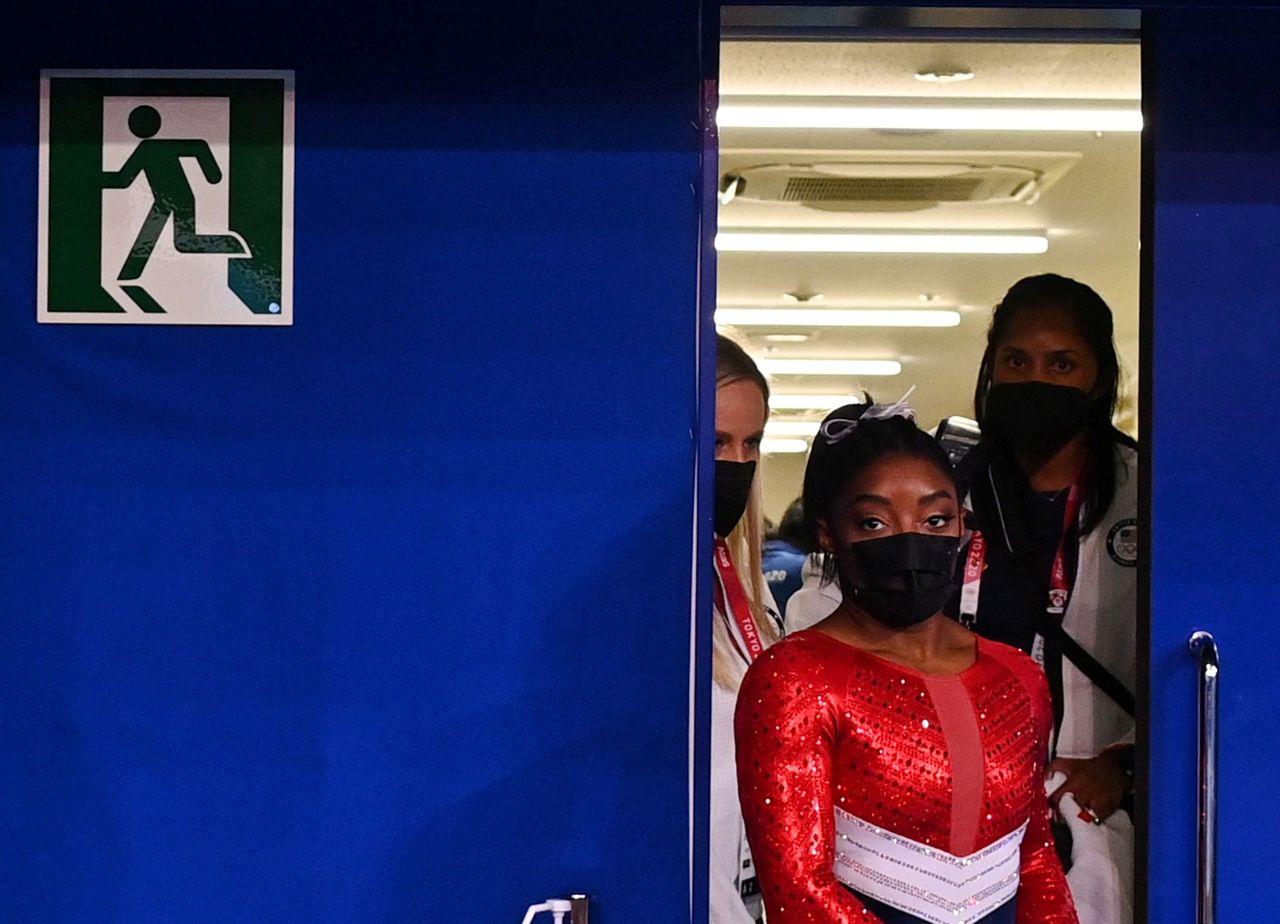 By Martin Petty and Mitch Phillips

TOKYO (Reuters) - Gymnast Simone Biles was flooded with messages of support from fellow athletes after she pulled out of two events at the Tokyo Games citing mental health, a sign of how awareness of emotional well-being has dramatically shifted in recent years.

The 24-year-old American superstar shocked the sporting world by pulling out of the team all-around competition on Tuesday citing the need to protect her mental health. A day later, she withdrew from the individual all-around event.

“We also have to focus on ourselves because at the end of the day, we’re human too,” she told reporters after her team mates surrendered gold and their title to Russian gymnasts.

“We have to protect our mind and our body rather than just go out there and do what the world wants us to do.”

She drew wide support from team mates, fellow Olympians and retired athletes, in a clear sign of how public discussion of issues such as stress and depression have become accepted on social media and more frequent in recent years, particularly since the pandemic.

“It broke my heart,” U.S. swimmer Michael Phelps told broadcaster NBC. “But also, if you look at it, mental health over the last 18 months, is something that people are talking about.”

Phelps, the greatest swimmer in history and the winner of 23 Olympic gold medals, has publicly discussed his own battle with depression, including contemplating suicide.

U.S. swimmer Erica Sullivan, who won the silver medal for the 1500m freestyle, also opened up about her own struggles in a news conference.

“I’m not facing a fraction of the pressure that Simone is, but there was a time in 2018 when I started getting psychological help for my issues, and there was a time when it was so bad that my coach told me I can’t keep racing like this and I will not be racing until I get better,” she said.

Biles’s team mates also lauded her, with Sunisa Lee posting on Instagram: “Proud of you & everything you’ve accomplished! Thank you for being a role model and someone I look up to every single day.”

The empathy was in sharp contrast to what Australian rower Sally Robbins faced in Athens in 2004 when she was overcome by anxiety and quit in the Olympic final. Robbins, dubbed “Lay-Down Sally” by one newspaper, was vilified by her crew mates, one of whom slapped her at an Olympic function.

Robbins later said that she had pushed herself beyond her physical capabilities to please others.

Gold medallist U.S. swimmer Katie Ledecky said she too felt immense pressure. “I would never want to speak for Simone or say that I know what she’s feeling because none of us do, but I understand that we’re at the highest level, we have the most eyes on us, on anyone in the world right now,” she told a news conference following her gold for the 1500m freestyle.

“I’ve gotten to know Simone over the years and we’re in touch every now and then, and you know I hope she knows that I really support her and hope she does really well but this week.”

Sebastian Coe, the president of World Athletics and a double Olympic champion, said he recognised the “profound challenges facing athletes” in trying to find the balance between the intensity of training and competition and maintaining their mental equilibrium.

Those difficulties were heightened by the pandemic for athletes, given the difficulties in training under lockdown, he told reporters, especially as athletes weren’t able to have their families or personal coaches on site for support.

“The advice I would give is to reach out, to colleagues and friends,” Coe said. “Don’t be afraid to show vulnerability, it’s a badge of honour in a way to want that help.”