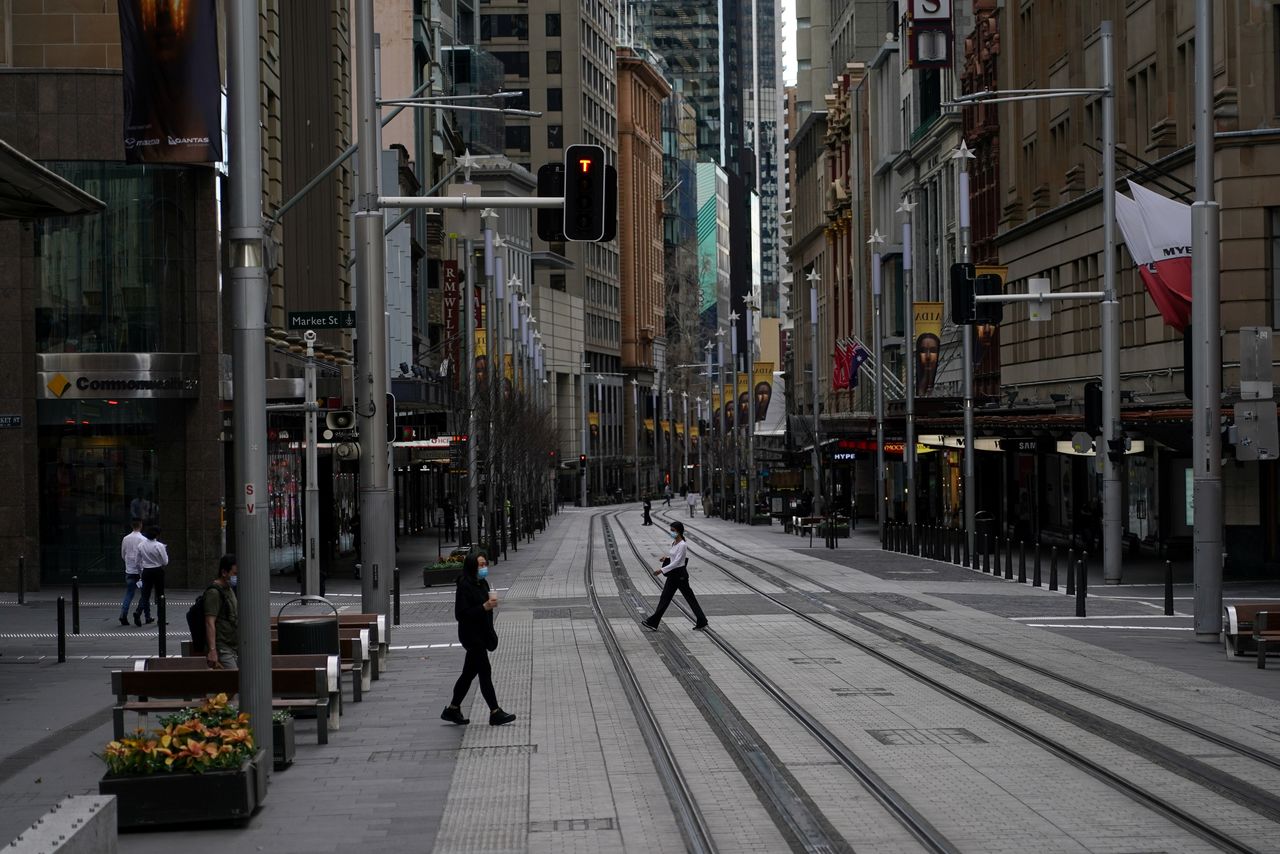 People in protective face masks walk through the quiet city centre during a lockdown to curb the spread of a coronavirus disease (COVID-19) outbreak in Sydney, Australia, July 28, 2021. REUTERS/Loren Elliott

(Reuters) - Governors of three prefectures near Olympics host city Tokyo are likely to ask the government to declare states of emergency for their regions after infections rose to a record high in the Japanese capital.

* The European Union (EU) has signed a contract with GlaxoSmithKline for the supply of up to 220,000 treatments of its investigational monoclonal antibody therapy sotrovimab against COVID-19.

* Britain expects the United States to ease some of its travel restrictions in the future, UK Transport Secretary Grant Shapps said after he removed the quarantine requirement for fully-vaccinated U.S. and European arrivals from next week.

* British Foreign Secretary Dominic Raab warned that the world would not be adequately vaccinated until 2024 unless other countries joined Britain in donating shots to poorer nations, an effort that could bring that date forward to the middle of next year.

* Norway postponed for a second time a planned final step in the reopening of its economy from pandemic lockdown, due to the continued spread of the Delta variant, the government said.

* Australia's biggest city, Sydney, extended a lockdown by four weeks after an already protracted stay-at-home order failed to douse an outbreak, with authorities warning of tougher policing to stamp out non-compliance.

* South Korea reported 1,896 new cases for Tuesday, its highest-ever daily increase, as the country struggles to subdue a fourth wave of outbreaks fanned by the Delta variant.

* The U.S. Department of Homeland Security said all of its employees, regardless of vaccination status, will need to wear a mask indoors and physically distance.

* Guatemala's president said on Tuesday the Central American nation has renegotiated its contract for the delivery of Russia's Sputnik V vaccines and is also in talks with Pfizer , Moderna MRNA.O and Johnson & Johnson.

* Zimbabwe has authorised the emergency use of Johnson & Johnson's vaccine, the first Western-made shot to be approved by the southern African nation, its medicines regulator said.

* Tanzanian President Samia Suluhu Hassan received her vaccine in public, in the most decisive signal yet of a break from the policies of her late predecessor who repeatedly dismissed the threat of the pandemic.

* The U.S. government will ship nearly 10 million doses of vaccines to two of the most populous African countries - Nigeria and South Africa, White House officials said, while Britain will offer 817,000 doses to Kenya.

* AstraZeneca's vaccine carries a small extra risk of rare blood clots with low platelets after the first dose and no extra risk after the second, a study led and funded by the drugmaker showed.

* Italian regulators approved the use of Moderna's vaccine for children aged 12 to 17.

* Global equities regained some poise on Wednesday as a storm in Chinese stocks showed signs of easing, while the dollar made modest gains as investors awaited a Federal Reserve meeting.

* The Federal Reserve will conclude its latest policy meeting on Wednesday, weighing the risks of a COVID-19 resurgence in the United States and a potentially slower economic recovery against a developing inflation threat that had been its main focus.

* British Prime Minister Boris Johnson said Britain's economy would show a steady recovery this year, albeit with "bumps on the road", after the country posted a strong increase in the number of employees on company payrolls in June.