By Kiyoshi Takenaka and Takashi Umekawa

TOKYO (Reuters) -Two people attending the Tokyo Olympics from overseas have been admitted to hospital with COVID-19, a Tokyo 2020 spokesperson said on Thursday, as daily cases in the host city and Japan as a whole hit new highs.

Prime Minister Yoshihide Suga denied there was any link between the games and the simultaneous rise in cases in the country. He said the government will decide on Friday whether to extend a state of emergency, already imposed on Tokyo and Okinawa, to additional regions, without saying where.

Such a declaration lets the authorities take extra measures such as shutting bars, although Japan has never ordered a full lockdown and most pandemic restrictions outside Tokyo's "Olympic bubble" are voluntary.

Public broadcaster NHK reported that an emergency was set to be declared for three prefectures surrounding Tokyo and western Japan's Osaka from Aug. 2-31, and extended in Tokyo and Okinawa to the end of August.

The Japanese capital announced a record 3,865 daily infections on Thursday, up from 3,177 a day earlier. Daily cases nationwide topped 10,000 for the first time, domestic media reported.

This week's spike prompted the government's top medical adviser to urge a "stronger, clearer" message about the growing risks from the pandemic, including to the increasingly strained medical system.

Games spokesperson Masa Takaya told reporters neither Games-related case was serious and that a third hospitalised person had already been discharged, declining to give details.

Competitors in the July 23-Aug. 8 Games and other attendees from around the world must follow strict rules to prevent any spread of the virus within the "Olympic bubble" or to the wider city. Spectators are banned from most venues.

"As far as I'm aware, there is not a single case of infection spreading to Tokyo's population from the athletes or Olympic movement," International Olympic Committee spokesperson Mark Adams told a daily media briefing.

Asked about a link between a surge in positive cases and the Olympics, Prime Minister Suga said, "I don't think there is any. In order to avoid the spread of infection from foreigners to the Japanese, strict border measures are being taken."

But experts worry that holding the Games sends a confusing message to the public about the need to limit activities to contain the virus as the highly transmissible Delta variant spreads. Only 26.5% of residents of Japan are fully vaccinated and testing is scant.

"The biggest crisis is that society does not share a sense of risk," Japan's top medical adviser Shigeru Omi told a parliamentary panel on Thursday. "The numbers (for Tokyo) surpassed 3,000 and this may have some announcement effect. Without missing this chance, I want the government to send a stronger, clearer message."

The surge spells trouble for Suga, whose support ratings are at their lowest since he took office last September, ahead of a ruling party leadership race and a general election this year.

Omi said vaccinations would help, but other factors could fuel infections, including the prevalence of the Delta variant, weariness of restrictions, summer holidays and the Olympics.

Taro Kono, the cabinet minister in charge of the vaccination rollout, which has hit supply snags recently, told the panel that all those who wanted shots should be able to get them by October or November.

More than 60% of Tokyo hospital beds available for serious COVID-19 cases were filled as of Tuesday, city data showed.

Many people have grown weary even of the relatively loose restrictions imposed under the city's fourth state of emergency since the pandemic began, making them less effective. 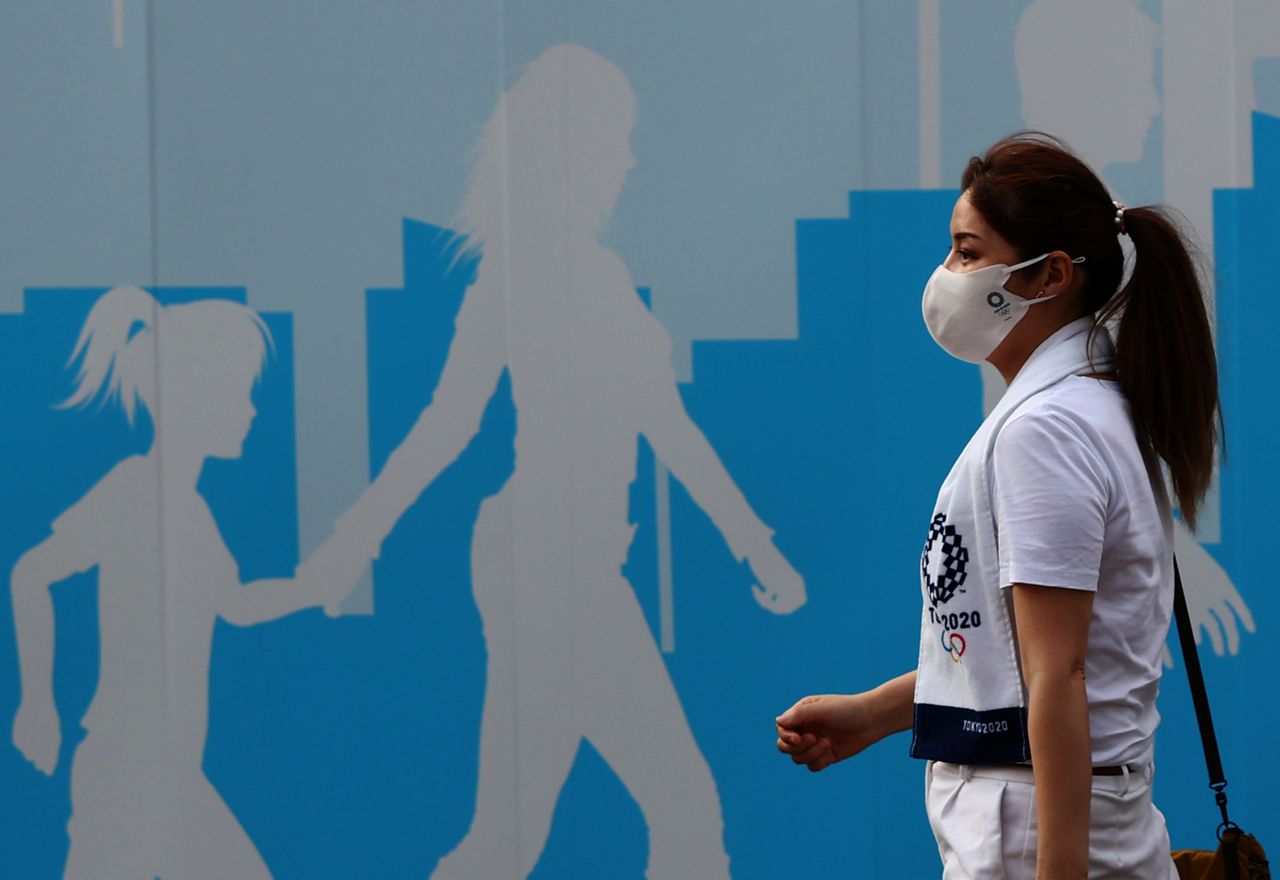 A woman wearing a protective mask, amid the coronavirus disease (COVID-19) outbreak, walks past a fence outside the National Stadium, the main venue of the Tokyo 2020 Olympic Games in Tokyo, Japan, July 28, 2021. REUTERS/Kim Kyung-Hoon 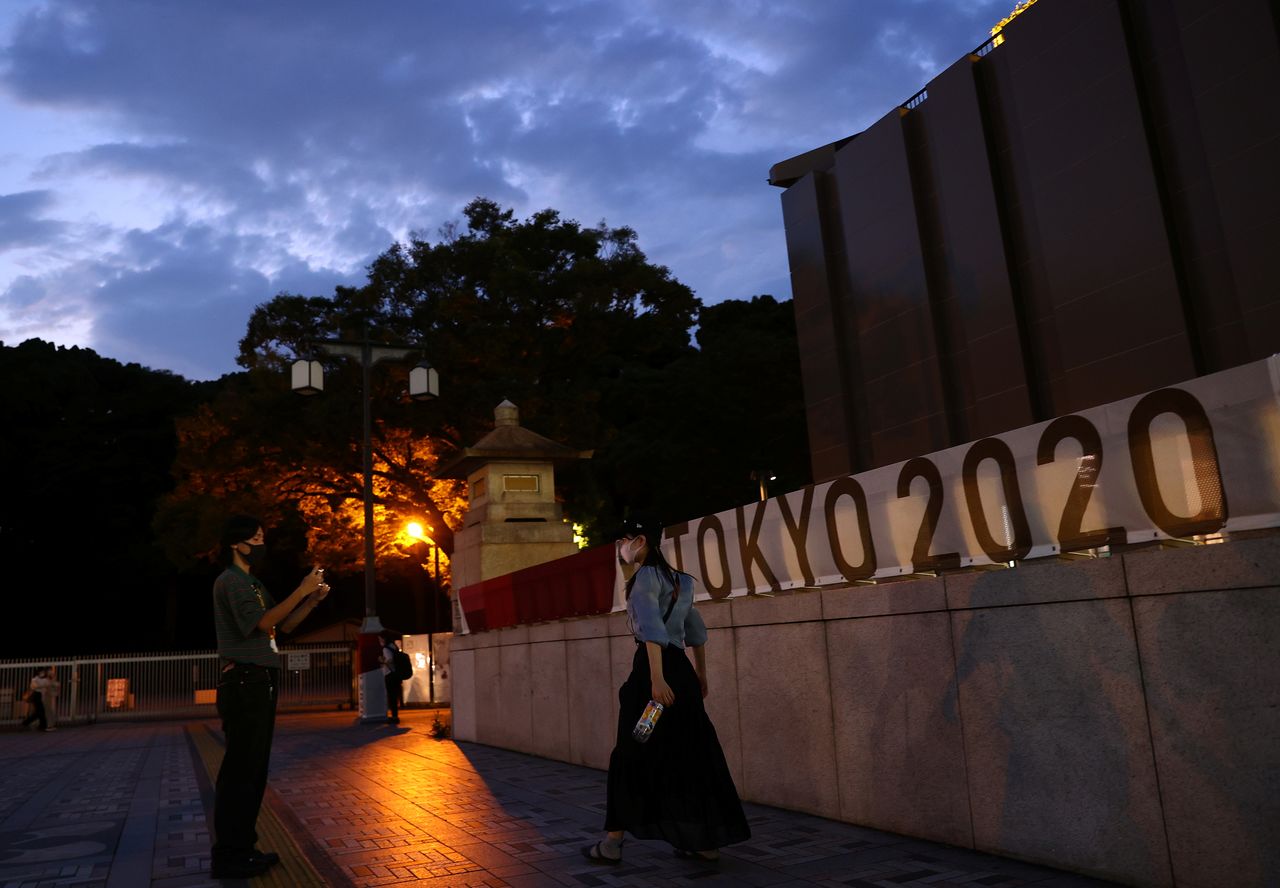 A couple wearing protective masks, amid the coronavirus disease (COVID-19) outbreak, takes a photo in front of a banner of Tokyo 2020 Olympic Games in Tokyo, Japan, July 28, 2021. REUTERS/Kim Kyung-Hoon 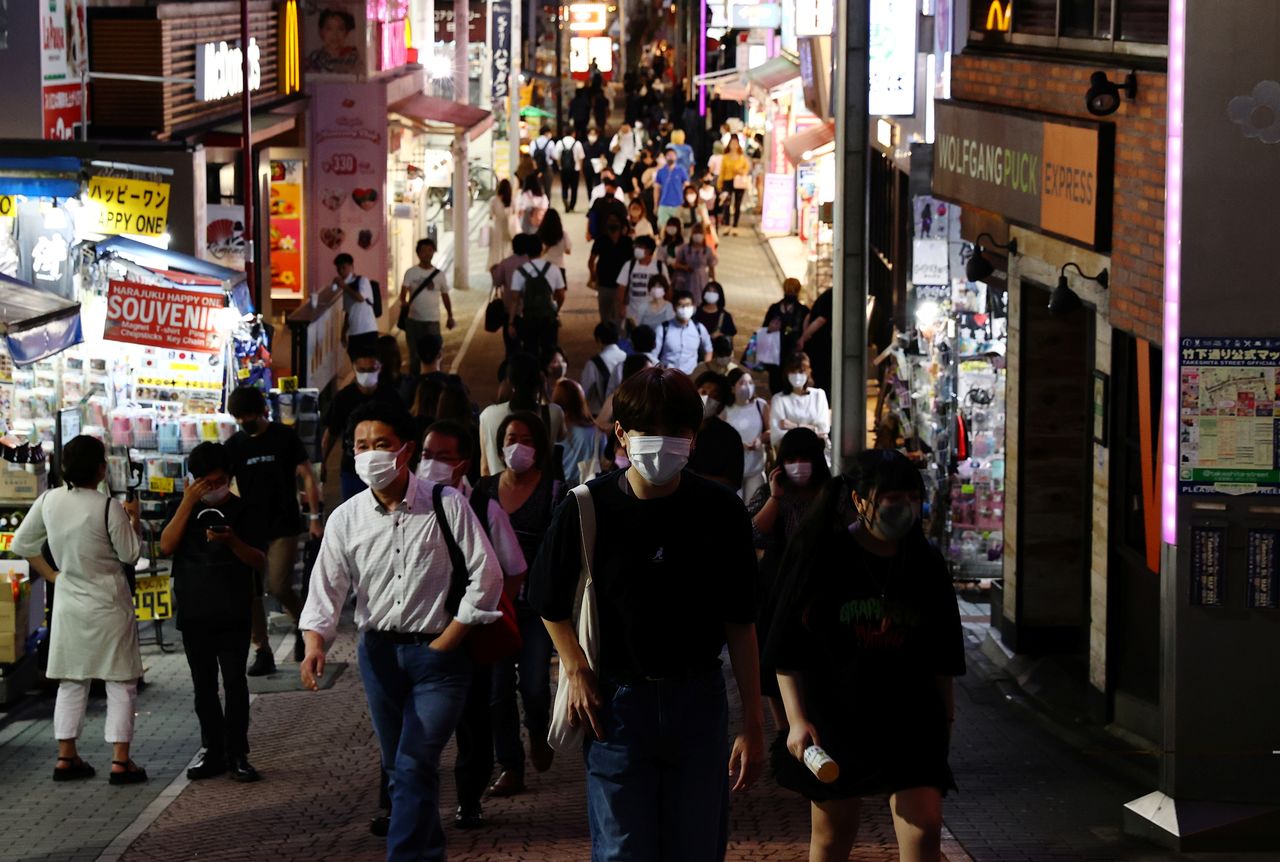 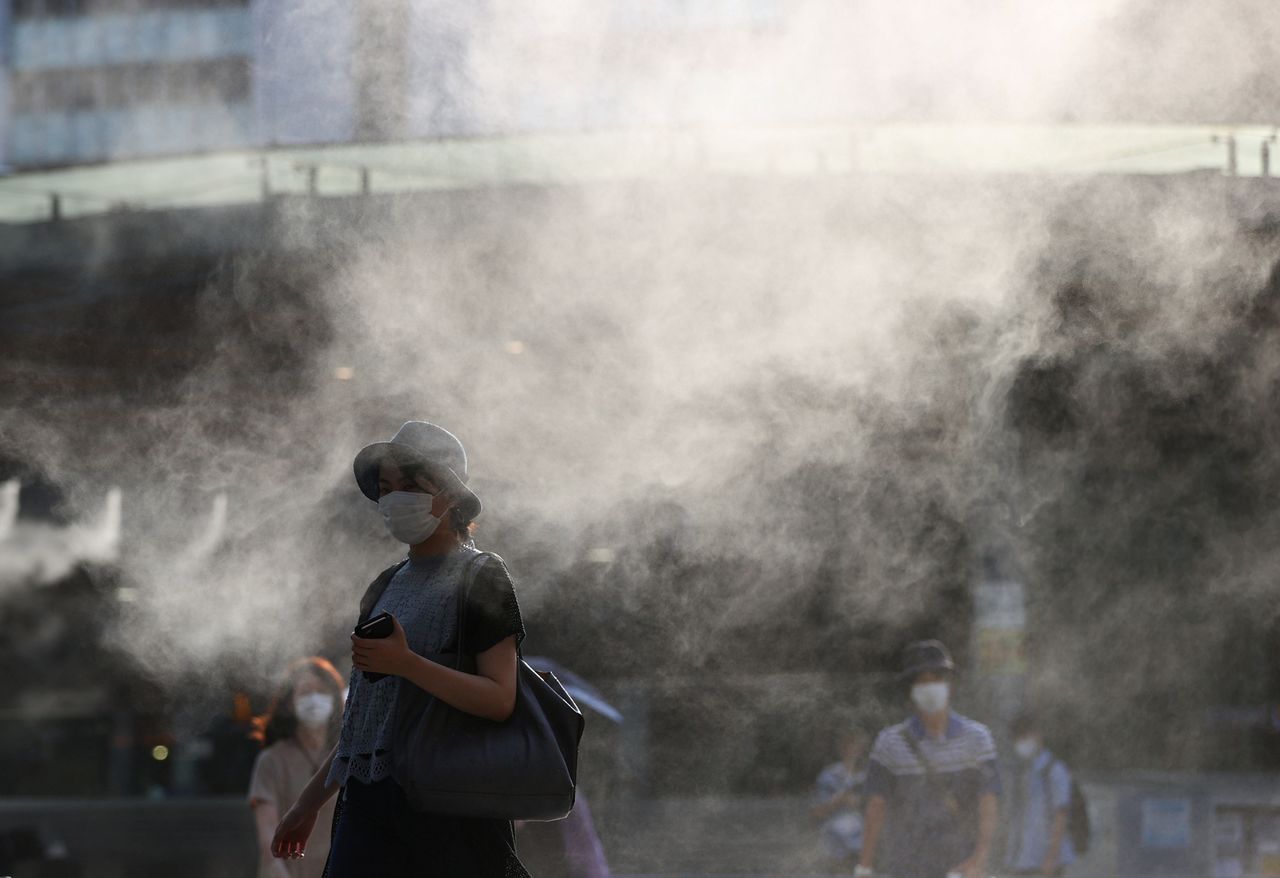 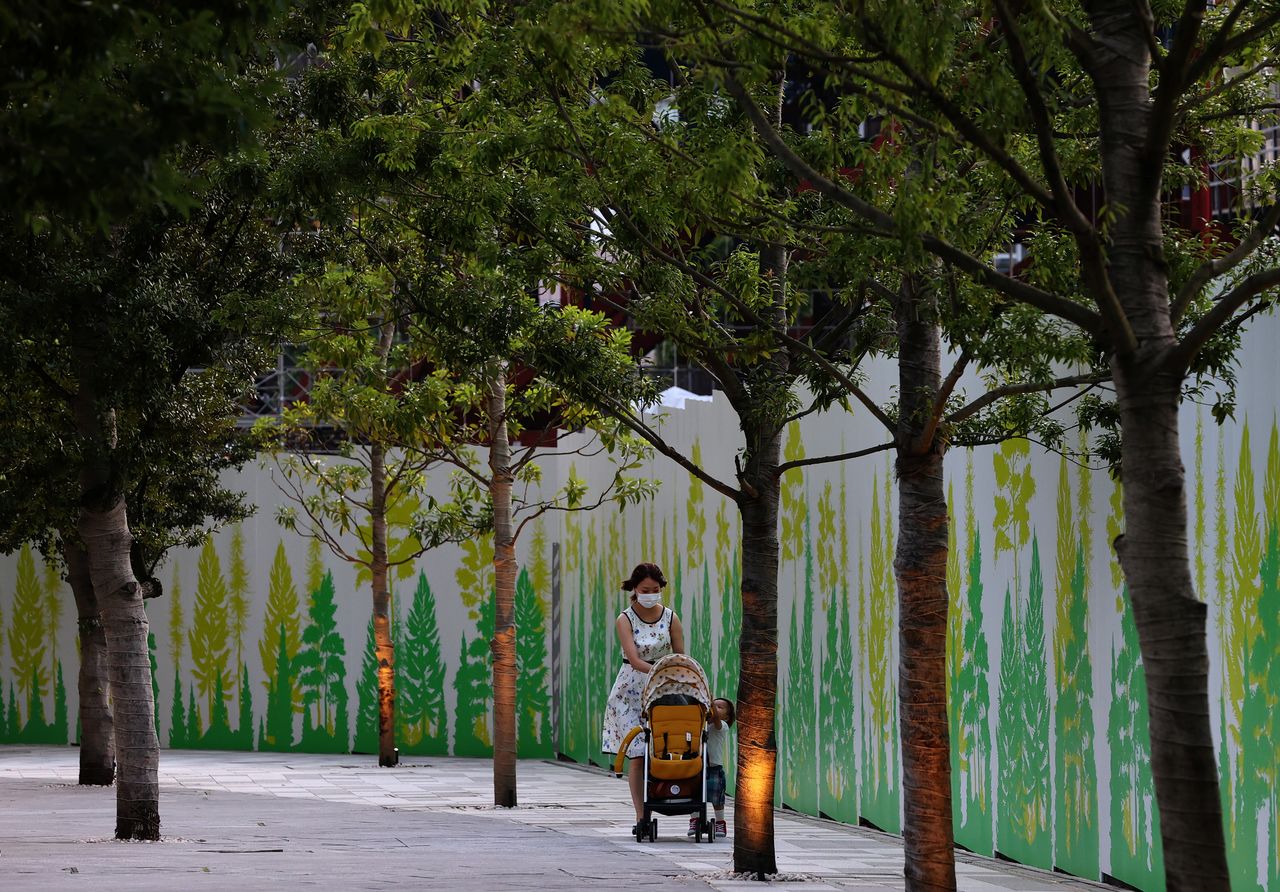 A woman wearing a protective mask, amid the coronavirus disease (COVID-19) outbreak, pushes a stroller outside the National Stadium, the main venue of the Tokyo 2020 Olympic Games in Tokyo, Japan, July 28, 2021. REUTERS/Kim Kyung-Hoon