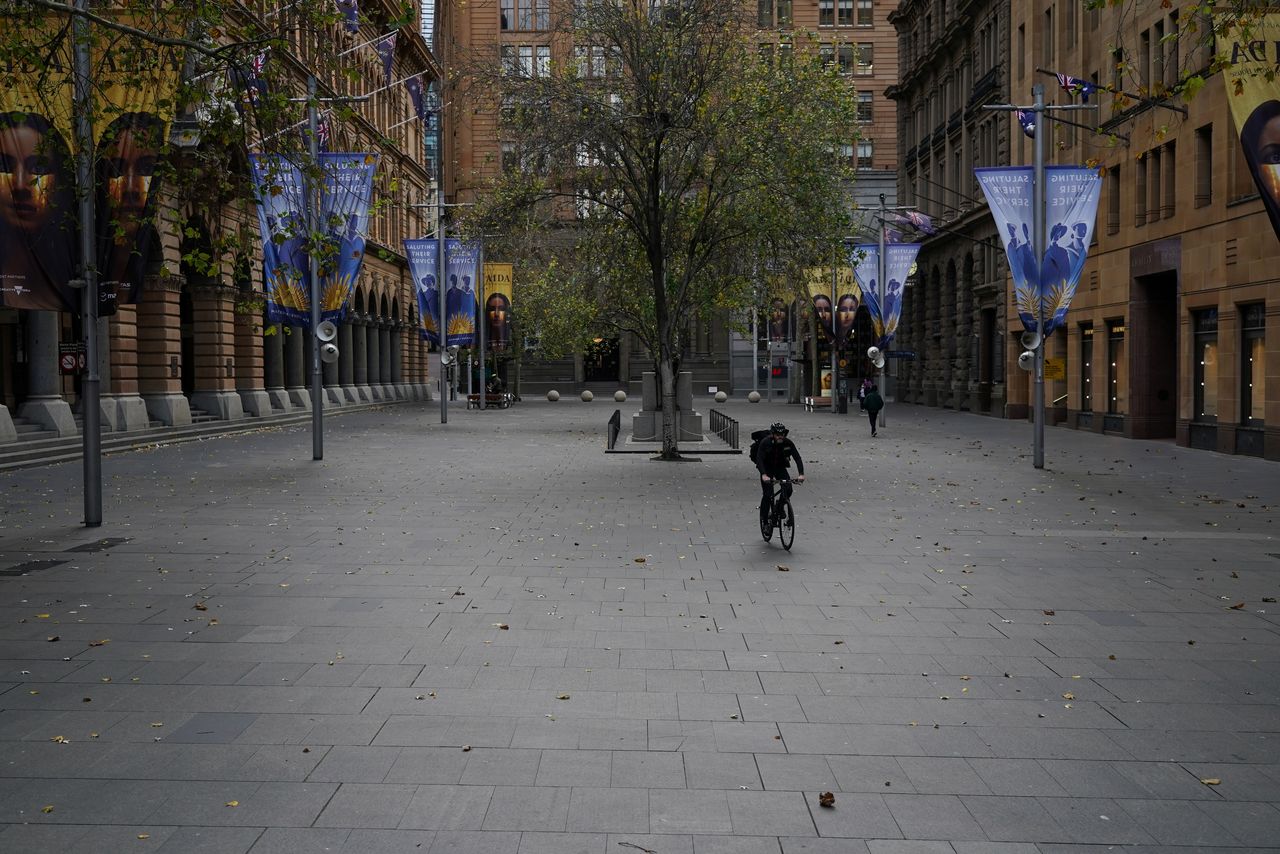 FILE PHOTO: A lone cyclist rides through the empty Martin Place in the city centre during a lockdown to curb the spread of a coronavirus disease (COVID-19) outbreak in Sydney, Australia, July 28, 2021. REUTERS/Loren Elliott

Pole vaulters Sam Kendricks of the United States and German Chiaraviglio of Argentina have been ruled out of the Olympics after testing positive for COVID-19, rattling competitors.

The immediate knock-on effect was that members of the Australian team were forced to isolate in their rooms as a precaution, but resumed normal activities later on Thursday after negative tests were confirmed.

Two people attending the Games from overseas have been admitted to hospital with COVID-19, a Tokyo 2020 spokesperson said on Thursday, as daily cases in the host city and Japan as a whole hit new highs.

The Japanese capital, where pandemic restrictions are mostly voluntary outside the "Olympic bubble", announced a record 3,865 daily infections on Thursday, up from 3,177 a day earlier.

Australia's biggest city Sydney posted a record one-day rise in local COVID-19 cases on Thursday and warned the outbreak would get worse, as authorities sought military help to enforce a lockdown of 6 million people poised to enter its sixth week.

Australia has struggled to contain an outbreak of the highly infectious Delta variant in and around Sydney in recent weeks, which threatens to push the country's A$2 trillion ($1.5 trillion) economy into a second recession in as many years.

"We can only assume that things are likely to get worse before they get better given the quantity of people infectious in the community," New South Wales Premier Gladys Berejiklian told reporters in Sydney.

The agency also said the extension was applicable to batches that might have expired prior to the decision provided they were stored at the recommended temperature.

Emergent BioSolutions meanwhile said it would resume production of J&J COVID-19 vaccine at its troubled Baltimore facility, where operations were stopped in April after millions of doses were found to be contaminated.

AstraZeneca still plans to seek U.S. approval for its COVID-19 vaccine even though the process there is taking longer than expected, CEO Pascal Soriot said on Thursday.

The company's plans to submit applications for approval have been pushed to the second half of this year after repeated delays because of requests for large data from U.S. authorities.

It also hopes to settle a legal dispute with the European Union over vaccine deliveries in the coming weeks, potentially ending a row that has dogged the drug maker and Brussels this year.

England's decision to keep quarantine measures for travellers coming from France and not for those coming from other European Union countries is discriminatory and not based on science, a French minister said on Thursday.

Iran will next week become the first country outside of Cuba to start producing one of the Communist-run island's homegrown COVID-19 vaccines on an industrial scale, Cuban state-run media said.