Olympics-A Tale of Two Cities: In the ‘bubble’ and the Tokyo outside

By Antoni Slodkowski and Kiyoshi Takenaka

TOKYO (Reuters) - The Tokyo Olympics is running a village for athletes and coaches where more than 80% are vaccinated against the coronavirus, testing is compulsory and movement is stringently curtailed.

None of that is true for the giant Japanese capital that surrounds the Olympic “bubble”.

The athletes’ village and Olympic press centre represent a huge, strict COVID-19 control zone for the more than 50,000 competitors, coaches, staff and journalists. Meanwhile, outside the fence, host city Tokyo - despite labouring through its fourth coronavirus lockdown as infections spike to record highs - is leading something like life as pandemic-normal.

Participants travelling to the Olympics are tested for the coronavirus before boarding their flights, upon arrival and regularly after that.

Organisers have administered nearly 275,000 tests, with athletes screened daily and journalists tested before events and every four days in the press centre.

The positivity rate in Games-related tests is just 0.02%, said International Olympic Committee spokesperson Mark Adams. “This is the most tested community almost certainly anywhere in the world.”

Athletes confirmed positive are quarantined, barring some from competition. American double world champion pole vaulter Sam Kendricks and rival German Chiaraviglio of Argentina were ruled out on Thursday after testing positive for COVID-19.

Two people attending the Games have been hospitalised for COVID-19, a Tokyo 2020 spokesperson said on Thursday, although neither case was serious. Twenty-four new Games-related infections were reported, including three athletes, bringing the total this month to 193.

Quarantined Dutch athletes have found it “very distressing” to be confined to a “very small” area, not allowed to get fresh air, the team’s technical director, Maurits Hendriks, said.

Journalists, during their two-week quarantine, must report their temperature and condition daily and download a contact-tracing app.

At the main press centre in Japan’s largest exhibition facility, reporters sanitise their hands before lining up for security checks. Masks are required at all times, except during facial recognition scans and while eating.

Rule-breakers are reprimanded, although the occasional maskless journalist can be seen at their computer along common tables, where workspaces are separated by plastic dividers.

Hand sanitiser is ubiquitous. At news conferences, officials scrub the microphone after each question.

Outside, state of emergency Tokyo-style bears little resemblance to the clinical conditions in the bubble, or even to the ghost-town lockdowns imposed on such cities as London, New York and Sydney, with throngs of people still on the streets.

Prime Minister Yoshihide Suga said on Thursday he had a “strong sense of urgency” about COVID-19 as Tokyo logged another record high. He again urged people to stay home and watch the Games - being held with almost no spectators - on TV. Travel curbs and work-from-home recommendations remain in place.

Footfall around Tokyo’s Shinjuku station, the world’s busiest, fell more than 80% during the first state of emergency in April and May 2020 from a pre-pandemic baseline, a metro government analysis of numbers from private data firm Agoop shows.

But those numbers are now down just 37% as lockdown fatigue has set in, with many Tokyoites saying the government’s enthusiasm for pressing on with the Olympics has made people feel it is acceptable to go out.

Tokyo’s COVID-19 infections began to spike shortly before the Olympics began, to a record 3,865 on Thursday, from less than 1,000 daily in mid-July, although serious cases and deaths have remained subdued.

Just 21% of people in Tokyo have had their vaccination shots. Administered coronavirus tests have risen gradually to 2.9 million in a city of 14 million.

During a congested rush hour in the trendy Shibuya district, college student Nae Onaka, 19, said she tried to avoid going out when she could, “but when it comes to work or part-time work, you have to go outside”.

Given the multiple lockdowns, “everyone’s awareness has slowly been fading, little by little. I think people are starting to not take the state of emergency as seriously, and because of that there have been more cases of COVID-19 recently, so I am a bit worried.”

Standing room only is the norm on commuter trains, although virtually all passengers wear masks and refrain from speaking loudly, while conductors open some windows in each carriage to promote air circulation.

After work, although bars are supposed to close at 8 p.m., some are openly flouting the lockdown’s mostly voluntary rules and Japan’s convenience stores are often open all night.

In the densely populated Ikebukuro district one night this week, young people found a place to sit outside for a makeshift get-together.

“At this point, I don’t think there’s much you can do about catching COVID. I don’t want to get it, but a lot of people can’t avoid it,” said part-time worker Yuka Toma, 19.

“I’m in the hospitality industry, so I’m bound to get it when I do. Anybody can get it, so I’ve just started hanging out.” 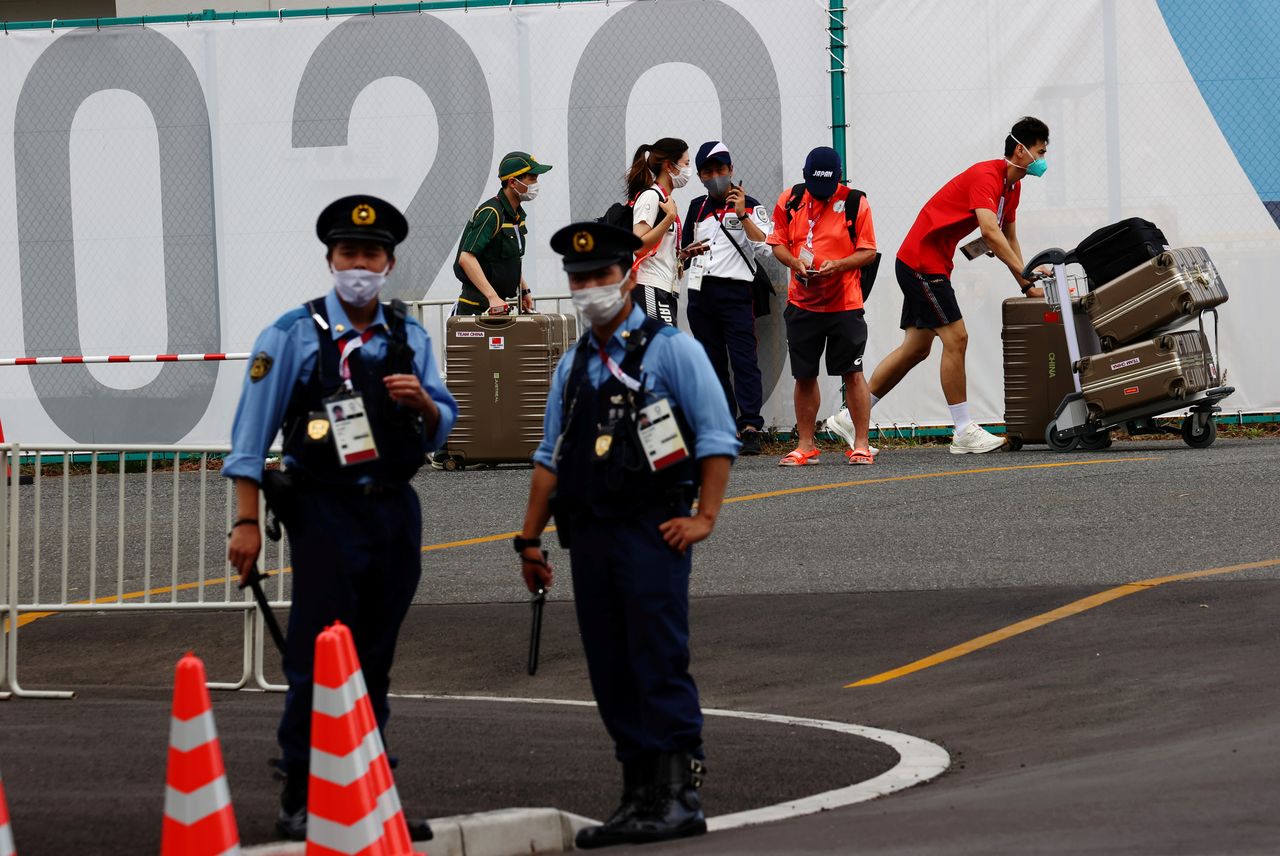 A Chinese basketball player wearing a protective mask, amid the coronavirus disease (COVID-19) outbreak, carries pieces of luggage to a car outside the athletes’ village for Tokyo 2020 Olympic Games in Tokyo, Japan, July 29, 2021. REUTERS/Kim Kyung-Hoo 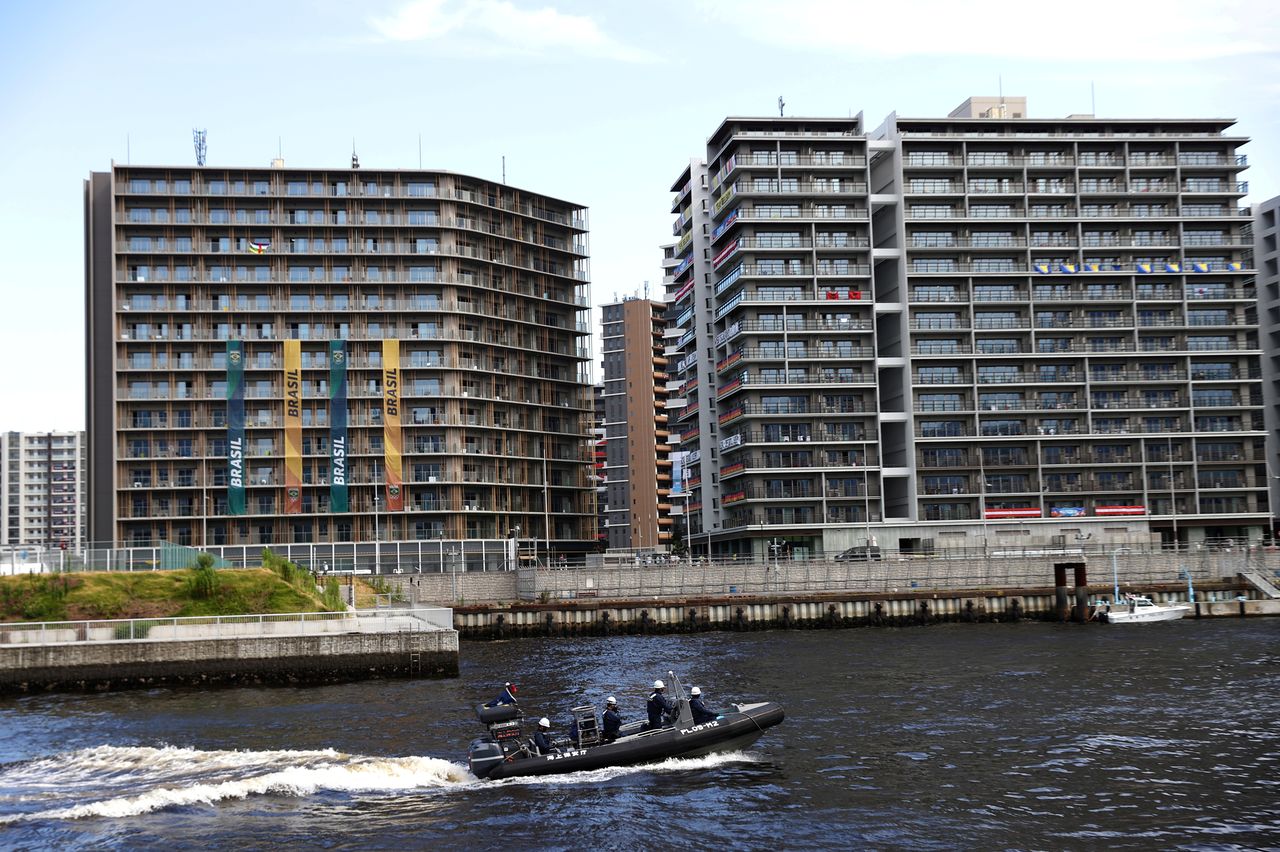 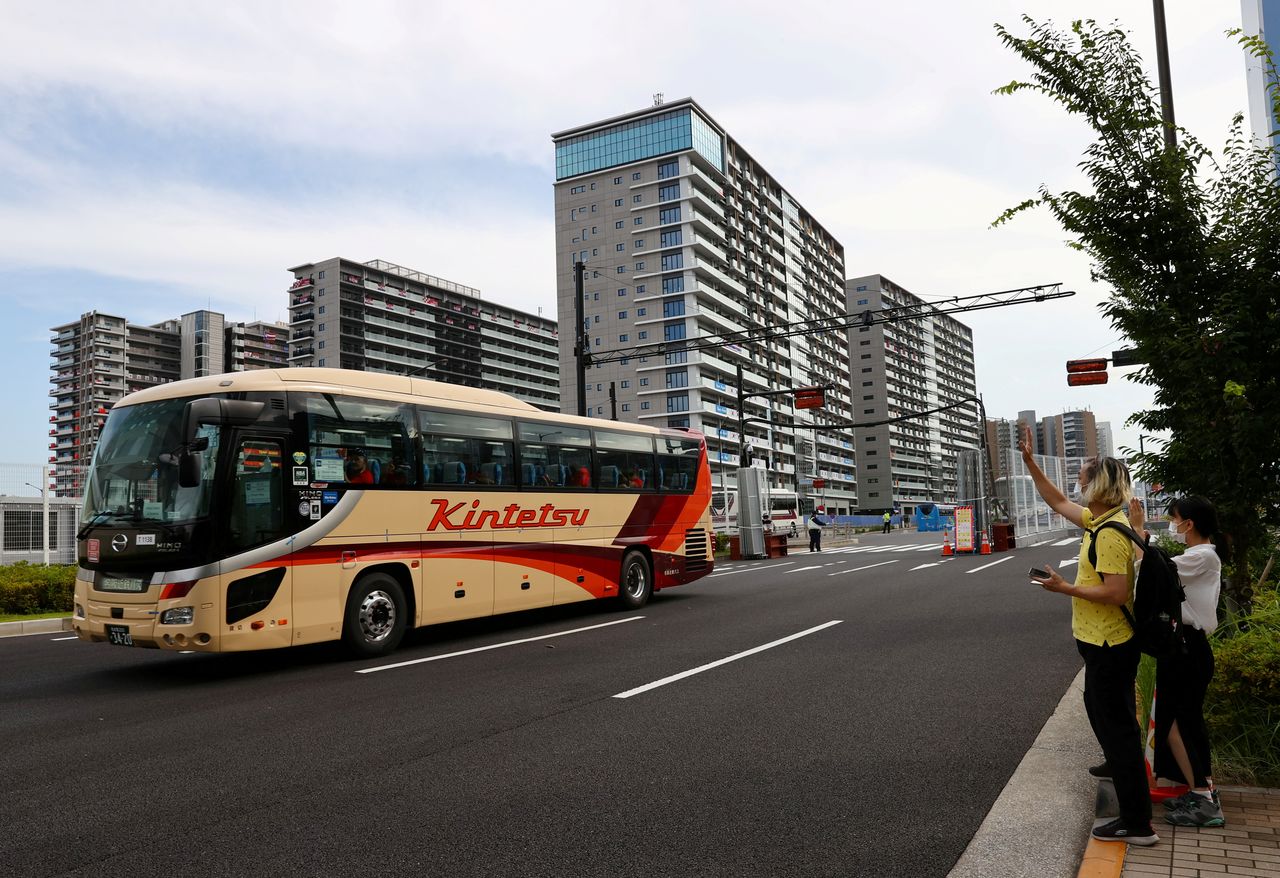 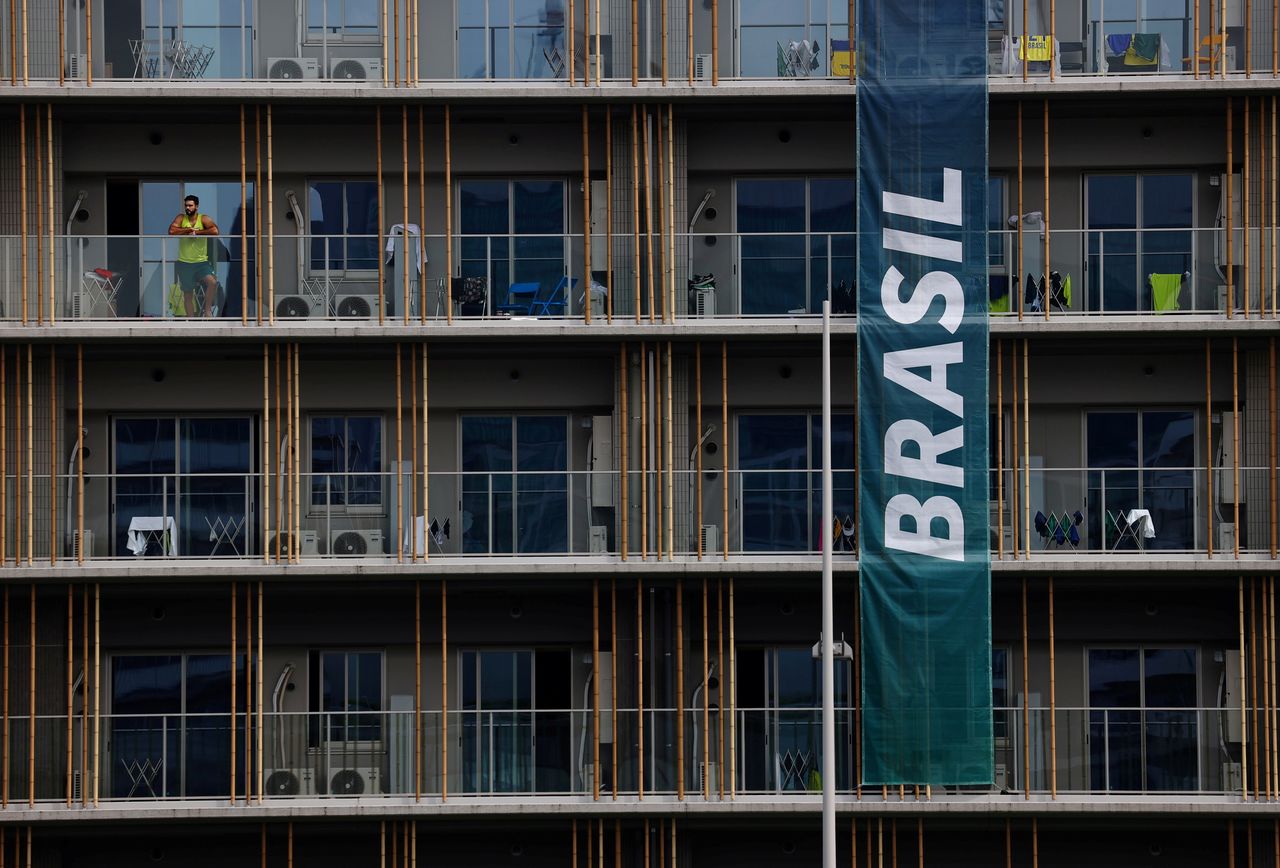 A man stands on a balcony at the athletes’ village for Tokyo 2020 Olympic Games in Tokyo, Japan, July 29, 2021. REUTERS/Kim Kyung-Hoon 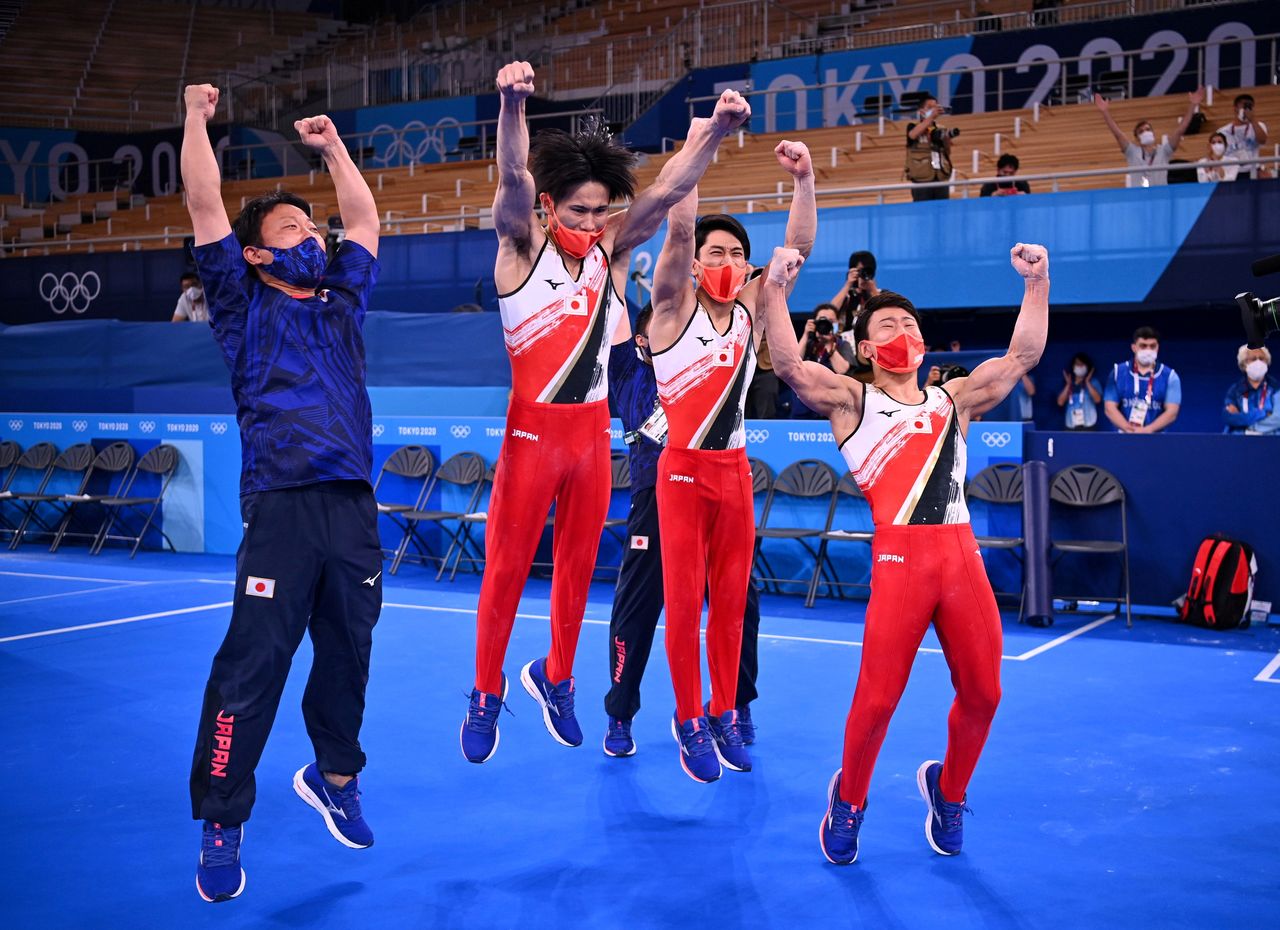 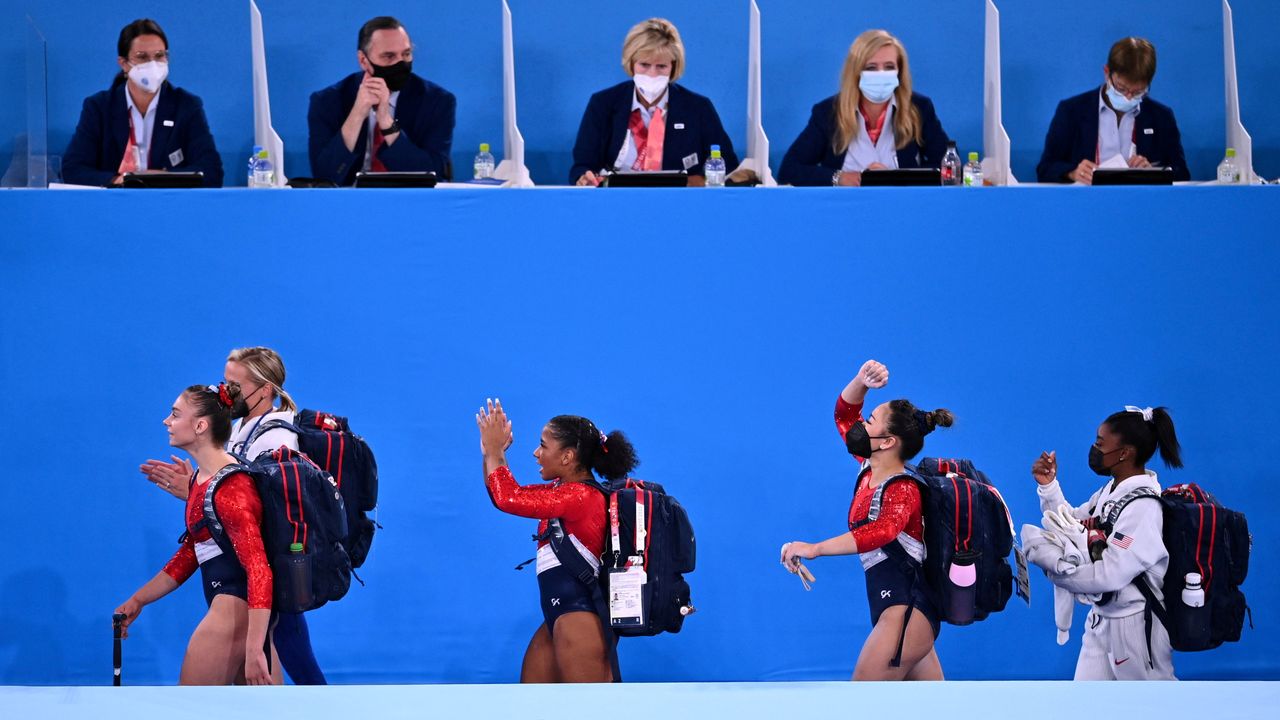