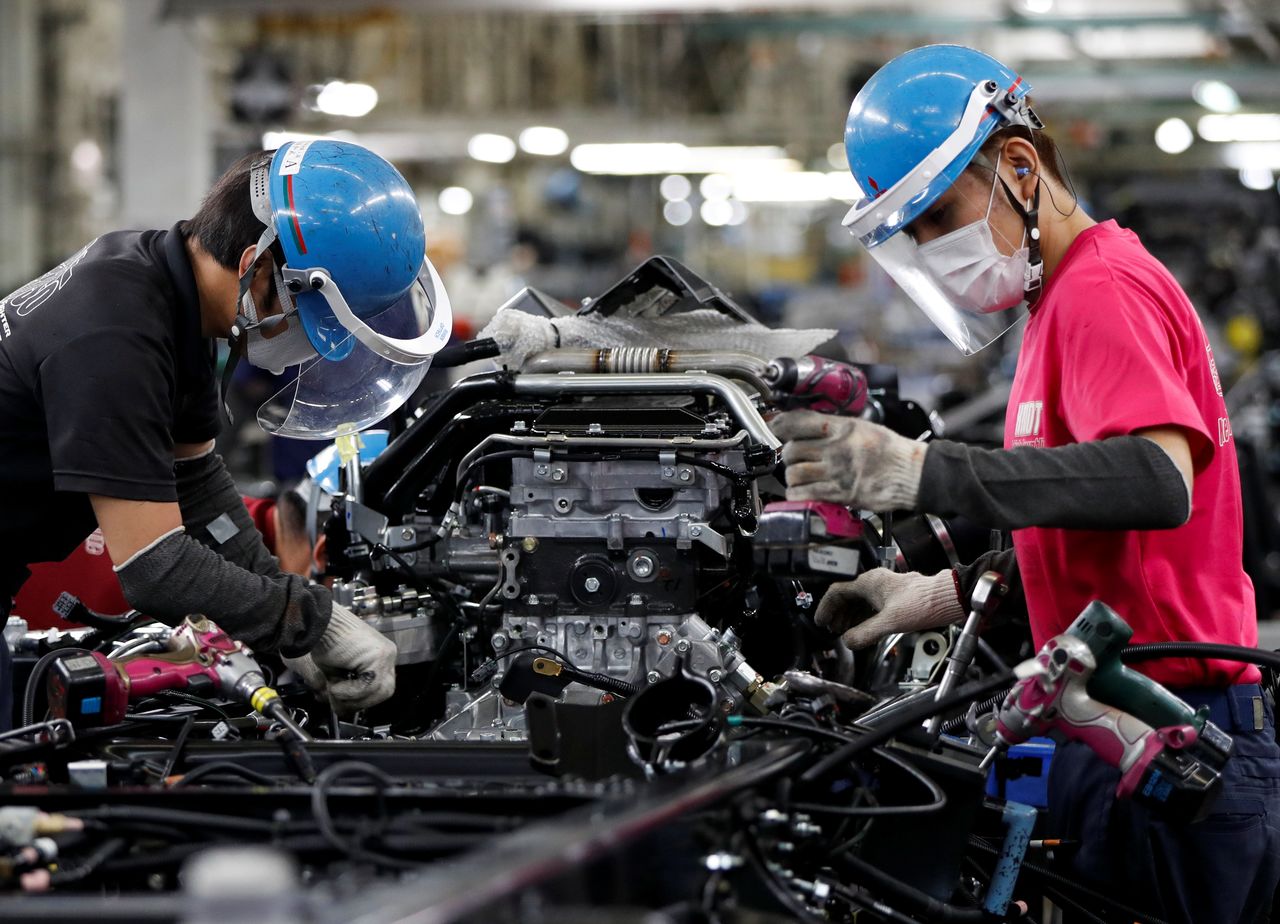 Employees wearing protective face masks and face guards work on the automobile assembly line, during the outbreak of the coronavirus disease (COVID-19), at Kawasaki factory of Mitsubishi Fuso Truck and Bus Corp., owned by Germany-based Daimler AG, in Kawasaki, south of Tokyo, Japan May 18, 2020. REUTERS/Issei Kato

By Kaori Kaneko and Leika Kihara

TOKYO (Reuters) -Japan's factory output jumped in June and job availability rose to the highest level in nearly a year, data showed, a sign robust overseas demand was offsetting the drag to consumption from the coronavirus pandemic.

But a spike in domestic infections to new records and a lingering global chip shortage add to woes for the world's third largest-economy, dashing policymakers' hopes for a strong rebound in July-September growth, analysts say.

The government is set to expand state of emergency curbs to more parts of the country through Aug. 31, overshadowing the Olympic Games held in capital city Tokyo.

"With the resurgence in infections, initial hopes of a clear economic rebound in July-September have faded," said Yoshiki Shinke, chief economist at Dai-ichi Life Research Institute.

"The economy will probably stagnate in the current quarter with any recovery pushed back until October-December onward."

Industrial output rose 6.2% in June after a sharp 6.5% drop in May, data showed on Friday, marking the highest growth since July last year and recovering to pre-pandemic levels.

The increase, which exceeded a median market forecast for a 5.0% gain, was driven mainly by a 22.6% surge in auto production as manufacturers sought to make up for the slump in May.

Manufacturers surveyed by the government expect output to fall 1.1% in July but rise 1.7% in August, a sign robust global demand for machinery and cars will underpin Japan's recovery.

Japan's job market remains tight. An index gauging job availability rose to 1.13 from 1.09 in May, exceeding market estimates for a 1.10 reading and marking the highest level since May last year. The jobless rate fell to 2.9% from 3.0% in May.

Underscoring the fragile state of consumption, however, retail sales were up just 0.1% in June from a year earlier, compared with a median market forecast for a 0.2% gain.

Some analysts are marking down their growth estimates for the current quarter, reflecting the planned expanded state of emergency curbs.

SMBC Nikko Securities said it now expects Japan's economy to grow an annualised 1.5% in July-September, well below its previous forecast of a 7.8% expansion.

Former Bank of Japan policymaker Takahide Kiuchi also expects the economy to grow around 2-3% in the current quarter instead of the initially projected double-digit expansion.

With the expected expansion, the state of emergency curbs could lead to a total loss of 2.19 trillion yen ($20 billion) for Japan's economy, offsetting an estimated 1.67 trillion yen benefit from the Olympic Games, said Kiuchi, who is currently executive economist at Nomura Research Institute.

"The economic boost from the Games will be completely wiped out from the expanded curbs," he said in a research note.