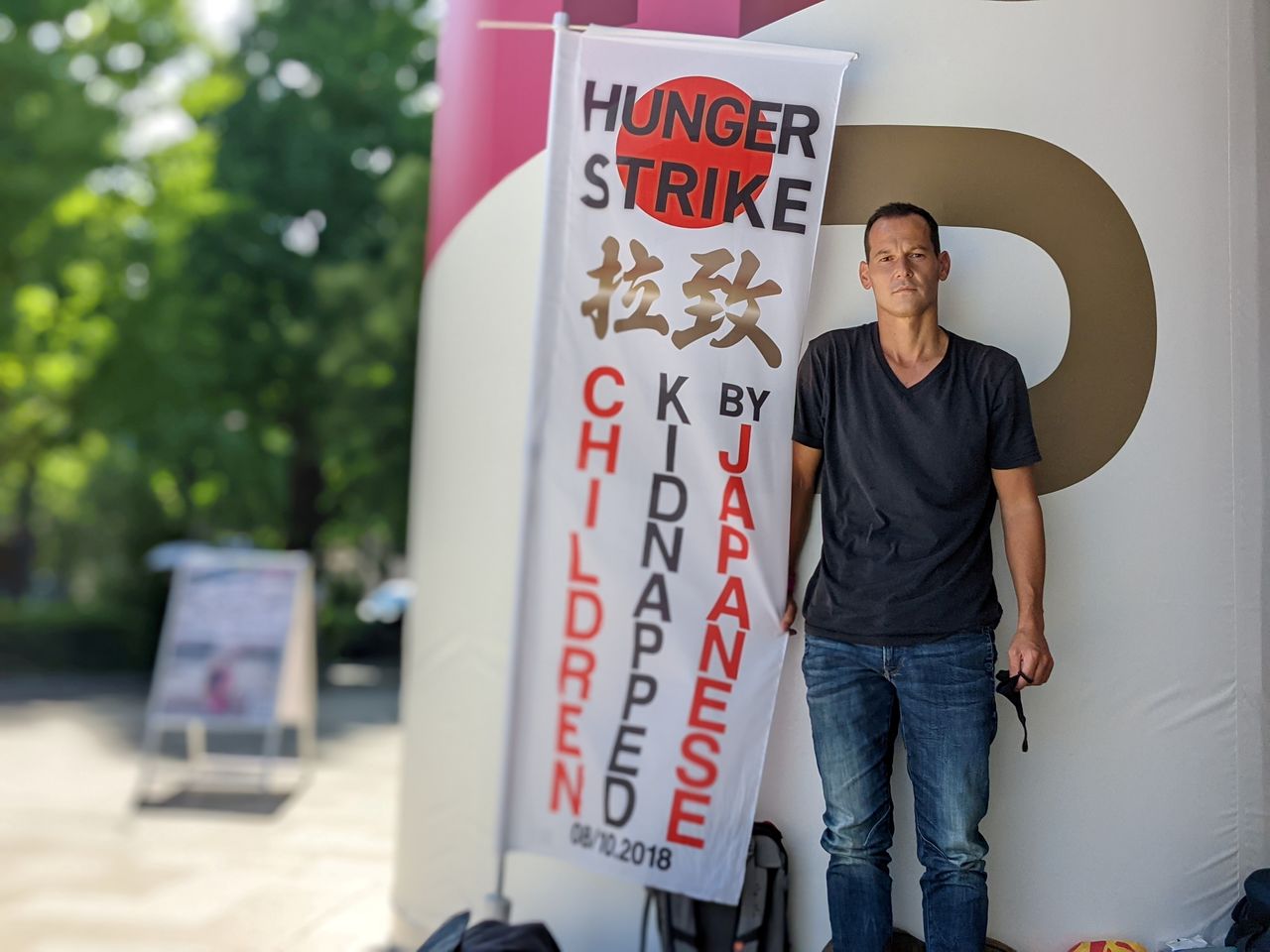 FILE PHOTO: French father-of-two Vincent Fichot stands with his banner where he has been on a hunger strike since July 10 to protest what he says is Japan's sanctioning of child 'abductions' by a parent, near the Olympic Stadium in Tokyo, Japan July 21, 2021. REUTERS/Chang-Ran Kim/File Photo

By Pak Yiu and Kiyoshi Takenaka

TOKYO (Reuters) - Ten European diplomats expressed support on Friday for a Frenchman who has been on hunger strike for three weeks during the Tokyo Olympics to protest what he calls the legally sanctioned abduction of his two children by his Japanese wife.

The European Union ambassadors to Japan met with Vincent Fichot, 39, who is camped out at a train station near the National Stadium, a focus of the ongoing Games, where temperatures regularly top 30 degrees Celsius (85 degrees Fahrenheit) amid sweltering humidity.

Fichot's dramatic protest https://www.reuters.com/world/asia-pacific/frenchman-seeks-macrons-help-over-abduction-his-children-japan-2021-07-23 aims to draw attention to the plight of parents like him who are denied custody or visitation of their children in a divorce. Japan, unlike most countries, does not recognise joint custody and children often lose contact with the non-custodial parent.

"It's a question of children's rights because the convention on children's rights clearly says that every child has the right to have contact with both parents, and that is why we support the parents and, of course, the French ambassador in this case," said EU Ambassador Patricia Flor.

"It's also a question of time for the children because they are growing up, so it's urgent," she told reporters. "It's not a question on which we can wait for long. We would appreciate having a quick response from the Japanese authorities."

An official at Japan's Justice Ministry declined to comment on a specific case. He said a panel of experts was reviewing the nation's divorce system as "we are aware that there are various views on the issue. Some people are saying they are not getting child support and others are saying they cannot meet" their children.

In 2019 Justice Minister Yoko Kamikawa said that generally Japan thinks it is "important for the children’s interest that both the father and mother can be involved in taking care of the children after divorce."

Fichot's estranged wife, Maiko Fichot, said through her lawyer: "As this is a divorce case between private individuals, I want my private information to be protected... I have no intention of fighting outside the courtroom or making further comment."

The lawyer, who asked not to be named, declined to make her available for an interview.

Visibly thinner than a week ago and at one point having to sit while talking to reporters, Fichot said he has lost 14 kg (30 pounds) since he began his fast on July 10. His hand was bandaged because, he said, he fractured two fingers on Thursday when he fainted.

Nonetheless, he spoke energetically for 45 minutes with the diplomats from France, Germany, Spain, Italy and other governments, forearm-bumping several of them.

Fichot wants compensation for his children for what he says is a violation of their rights, or barring that, French sanctions against Japan.

A year ago, the European Parliament urged Japan https://www.reuters.com/article/us-japan-children-eu-parliament-idUSKBN24A1LU to comply with international rules on child protection and to allow for joint parental custody after a number of EU citizens were denied access to their children by Japanese mothers.

Macron did the same with Suga's predecessor, Shinzo Abe, in 2019.

"This is a matter primarily for the Japanese society," Setton said. "Regardless of the dramatic and painful circumstances Mr Fichot's situation is, we do not want to interfere in a debate which is a Japanese one."

Fichot said he recognised that France cannot interfere with the Japanese justice system. "I was hoping for sanctions at least, but for me, as far as I'm concerned, I'm sticking to my motivation."