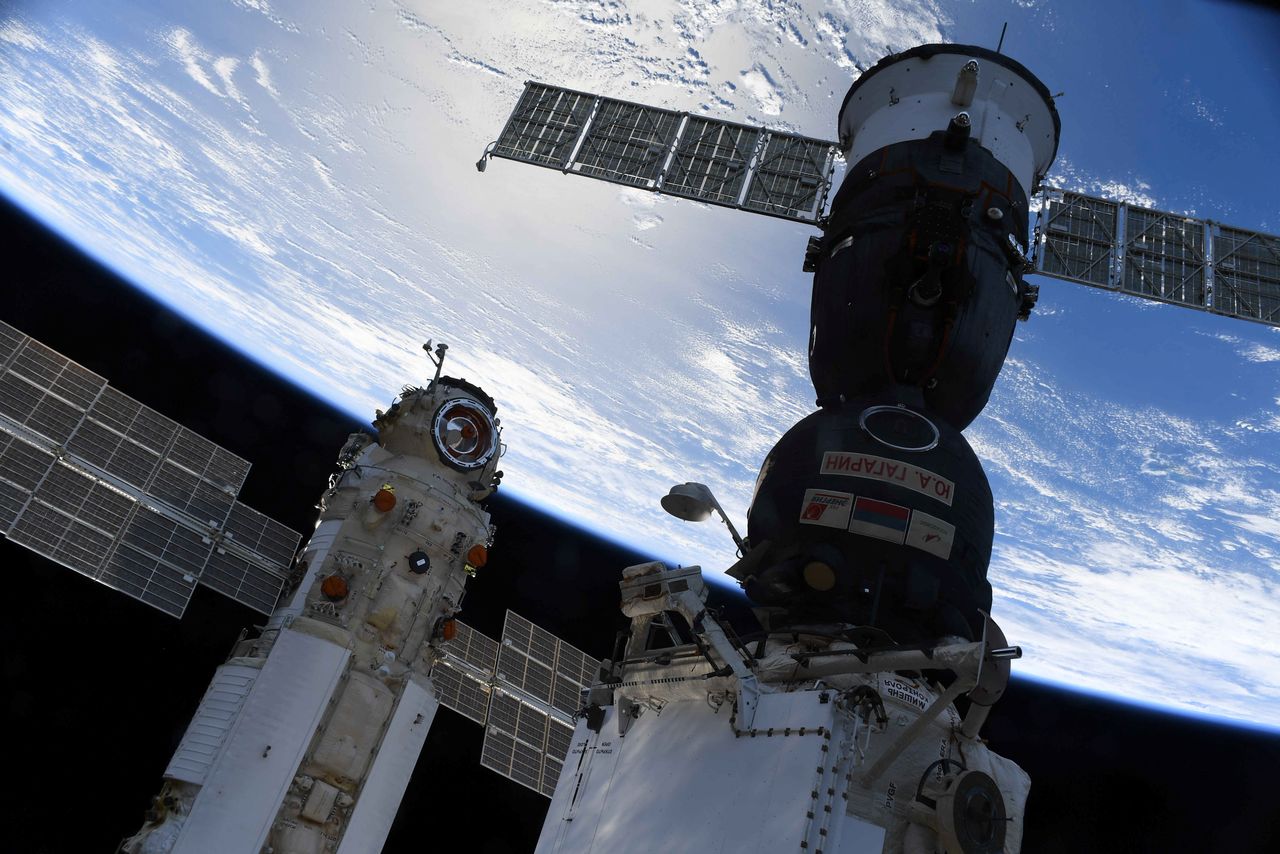 The Nauka (Science) Multipurpose Laboratory Module is seen docked to the International Space Station (ISS) next to next to Soyuz MS-18 spacecraft on July 29, 2021. Picture taken July 29, 2021. Oleg Novitskiy/Roscosmos/Handout via REUTERS

By Andrew Osborn and Alexander Marrow

MOSCOW (Reuters) -A software glitch, and possible lapse in human attention, were to blame for throwing the International Space Station out of control, but work was proceeding to activate a newly attached module at the centre of the mishap, Russian space officials said on Friday.

Jet thrusters on the Russian research module Nauka inadvertently reignited on Thursday a few hours after it had docked to the space station, causing the entire orbital outpost to pitch out of its normal flight position some 250 miles above the Earth with seven crew members aboard.

According to NASA's account of the incident, the mission flight director immediately declared a spaceflight emergency as engineers on the ground struggled to regain stability of the sprawling research satellite.

Attitude control over the station was lost for 45 minutes, as ground-based flight teams activated thrusters on another module of the outpost and on a separate cargo ship previously docked to the complex to restore its proper alignment, NASA told reporters on Thursday.

During that time station, which measures the length of an American football field, was slowly pitching end-over-end at a peak rate of about half a degree per second, equivalent to nearly four rotations per hour, according to NASA.

Communication with the crew also was lost twice for several minutes during the emergency.

On Friday, Vladimir Solovyov, designer general at Energia, a Russian space agency company, sought to reassure international partners that the incident had been contained and said cosmonauts would have Nauka - the Russian word for "science" - up and running soon.

"Due to a short-term software failure, a direct command was mistakenly implemented to turn on the module's engines for withdrawal, which led to some modification of the orientation of the complex as a whole," he said in a statement.

"The crew is now busy balancing the pressure in the Nauka module. In the afternoon, the crew will open the hatches, enter the module, turn on the necessary means of purifying the atmosphere and begin normal regular work."

Dmitry Rogozin, head of the Russian space agency Roscosmos, said later that human inattentiveness could have been involved.

"Everything was going well but there was a human factor. There was some euphoria (after successful docking), everybody got relaxed," he was quoted as saying by the Komsomolskaya Pravda website.

NASA and Roscosmos each said that the seven crew members aboard - two Russian cosmonauts, three U.S. astronauts and two others from Japan and France - were never in any immediate danger.

Both agencies also said the situation was resolved in relatively short order with no apparent damage to the space station. But NASA space station program manager Joel Montalbano said he could recall only two or three previous occasions in the 20-plus-year history of the orbiting laboratory that the thrusters of a docked vehicle or module had misfired like that.

The mishap also prompted NASA to postpone the planned launch of Boeing Co's Starliner space capsule on a highly anticipated, un-crewed test flight to the space station. The blastoff, which had been set for Friday from Cape Canaveral, Florida, has now been tentatively pushed back Aug. 3.

Russian cosmonaut Oleg Novitsky, who is on board, on Friday told his followers on Twitter not to worry.

"Dear friends, I’m reading your numerous comments. Don’t worry! Our work at the International Space Station to integrate the newly arrived Nauka module continues! Tonight we are going to open the hatches. Will keep you posted!"

Roscosmos said checks on Nauka's engines were being completed remotely by Russian specialists to ensure continued safety and that the station was on its normal flight trajectory.

It said that the module docking had been otherwise successful.

Rogozin, head of Roscosmos, had hailed Nauka's arrival the previous day as "a very difficult and important victory for us" and warmly accepted congratulations on Twitter from space entrepreneur Elon Musk.

Rogozin also spoke of plans to launch another Russian module to the station in November.

Roscosmos has suffered a series of mishaps and corruption scandals, including during the construction of the Vostochny Cosmodrome in the country's far east where contractors were accused of embezzling state funds.