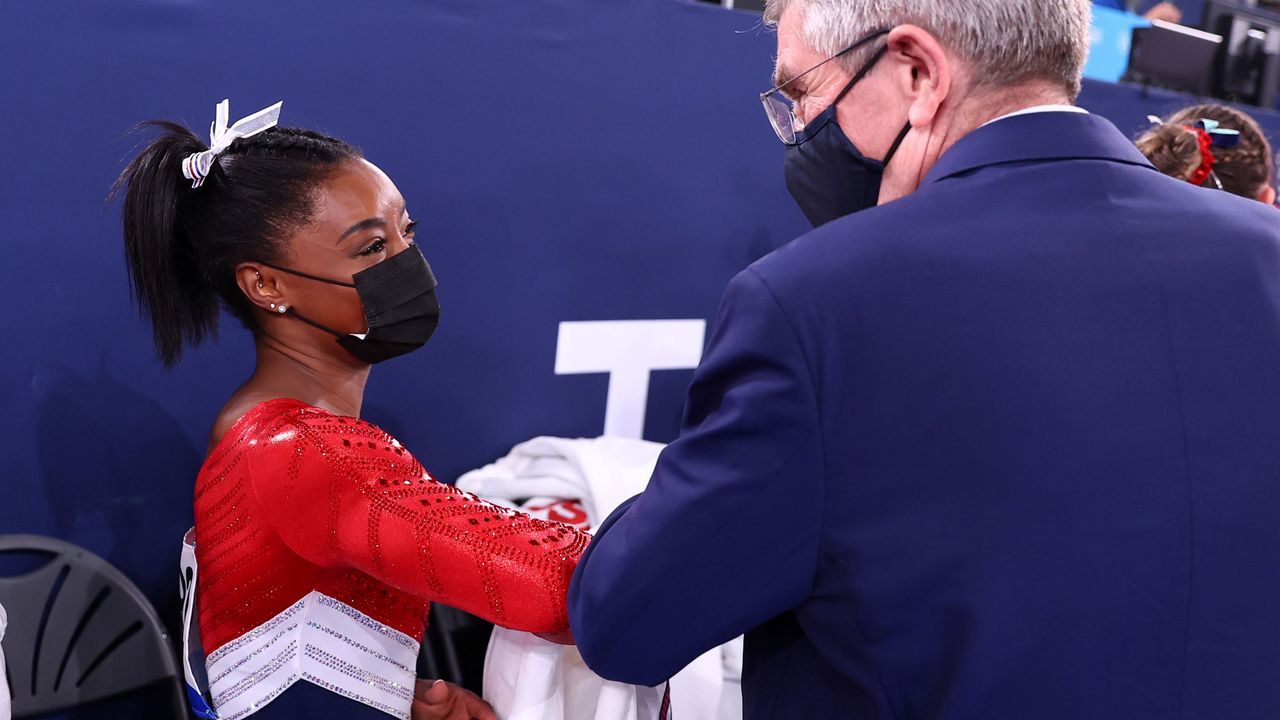 "I can only say, you know, we are with her," the German head of the International Olympic Committee said.

Superstar Biles sent shockwaves through the Olympic world on Tuesday when she pulled out of the gymnastics team event after one vault. Her American team subsequently took silver.

The 24-year-old went on to speak with remarkable candour about her mental demons.

"I must personally say I had the opportunity to at least briefly talk with her after the team competition... I'm really admiring how she's handling the situation," Bach, a gold medal fencer at the 1976 Games, said.

"She admits to having this problem. This is already courageous. Who one year ago would have admitted to say (they) have mental health problems?

"And at the same time then cheering on (her) team mates. And then being there, and supporting when her successor is in the all-around final? This is, you know, great human quality and this is Olympic spirit at its best."

Sunisa Lee won the all-around gold on Thursday with Biles urging her on from the stands at the Ariake Gymnastics Centre.

Biles is still in Tokyo, and has not yet decided whether she will compete in gymnastics events still to come.

Earlier on Friday, Biles wrote about her troubles in what appeared to be a series of answers to questions from followers on Instagram.

"It's honestly petrifying trying to do a skill but not having your mind & body in sync," she wrote.

Asked if it was worse on a certain apparatus, she said: "It's never transferred to bars & beam before for me, it strictly likes floor and vault. Go figure, the scariest two.

"But this time it's on literally every event. Which sucks... really bad."

Biles called the incidents of disorientation "the twisties" https://www.reuters.com/lifestyle/sports/i-had-twisties-just-like-simone-2021-07-30.

Following her shock withdrawal on Tuesday she told how she had been feeling lost, and that she had to focus on her wellbeing.

"It just sucks when you are fighting with your own head. You want to do it for yourself but you’re just too worried about what everybody else is going to say, think, the internet.

"We also have to focus on ourselves because at the end of the day, we're human too. We have to protect our mind and our body rather than just go out there and do what the world wants us to do."

Attention is now on whether Biles will compete in the individual events in beam, floor, uneven bars and vault that she has qualified for. Those begin on Sunday with vault and uneven bars.