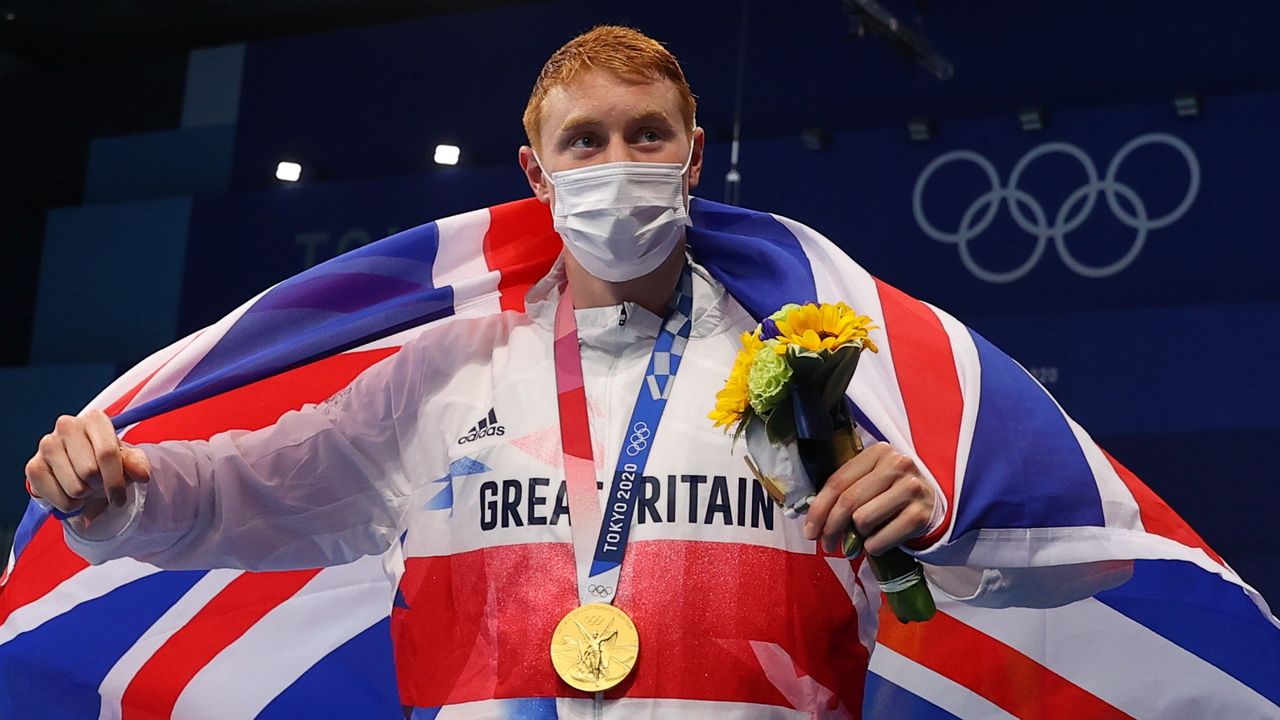 TOKYO (Reuters) - The Olympic Games has the power to catapult athletes from obscurity to the front pages and prime-time television and yet, ensconced in their bubble in Tokyo, it can sometimes be hard for them to take in the enormity of their achievements.

Sitting in a cafe at the Olympic Village on Friday, British swimmer Tom Dean was finally able to grab some time to reflect on the double gold medal success he enjoyed in the Tokyo pool this week.

The video of his family and friends, captivated by the race and then wildly celebrating his victory in Tuesday’s 200m freestyle, went viral online and his mother has been inundated with interview requests.

“I cannot stop watching that video and it is amazing how much it was shared,” Dean told Reuters, “And yeah, the messages, my phone was blowing up,” he said.

Dean has been pleased to see his mother and siblings sharing some of the limelight, which he considers just reward for all their support for his career.

But he himself has had little time to bask in the glory.

“You have a lot you have to go through after a race,” he said referring to the various formalities and the recovery sessions set up by the team’s training staff.

After his individual success, there was also the prospect of another race the next day to temper any temptation to celebrate.

He was back in the pool 24 hours later and followed up his triumph with a second gold as part of the Britain team which won the 4x200m freestyle relay.

They were, he says, two different emotions -- beating his room-mate Duncan Scott to the wall in the 200 free, leaving him with the silver, and then sharing the gold glory in the relay together.

NO TIME FOR CELEBRATING

But even then, Dean was not ready to switch off.

“It isn’t really time for celebrating until the swimming programme is over,” he said, stressing the role that he and the rest of the British swimmers have played in supporting each other at the pool.

Indeed, he was back at the Tokyo Aquatics Centre backing his team mates in Friday’s races, where Scott picked up a third medal with a silver in the 200 medley and Luke Greenbank added a bronze in the 200m backstroke.

“It’s been amazing,” he says of the British team effort, which also includes Adam Peaty’s gold medal in the 100m breastroke and could feature more success in the new mixed medley event on Saturday.

He is quick to praise all those who have played a role in his success, from his coach Dave McNulty, to his swimsuit manufacturer Speedo but his family is never far from his mind.

He credits his elder sister Connie, herself a talented swimmer, with ensuring he did not quit the sport when he was a 13-year-old at a club in Maidenhead, west of London, and tiring of the gruelling routine.

“You know at that age, 13 or 14, getting up at 5am on a schoolday to go out to a swimming pool for training, its really tough. She was the one who kept me going and kept me in it,” he says.

The routine has only got tougher, hardly helped by two bouts of COVID-19, and Dean outlines a daily drill of morning sessions at the pool then back for more after lunch, gym sessions and a strict nutritional programme.

It is not an easy life but it has been worth it. “The fun part is knowing what all that work can bring in a pool. The racing is the fun part,” he says.

Dean does have a love for the sport though and is animated when he talks about the swimmers he admired growing up.

His first hero was 23-times Olympic gold medal winner Michael Phelps but his fascination with the American led him to search out videos of earlier freestyle greats such as Australian Ian Thorpe.

Those are perhaps the obvious role models, but a student of the sport, Dean also talks with appreciation of the careers of swimmers such as Hungarian Laszlo Cseh, who bowed out on Friday at the end of his fifth Olympics.

Dean can’t imagine a career of such longevity but he has his sights set on the next Games in 2024.

“I want to be in Paris and that is all I am going to be thinking about for now,” he said.