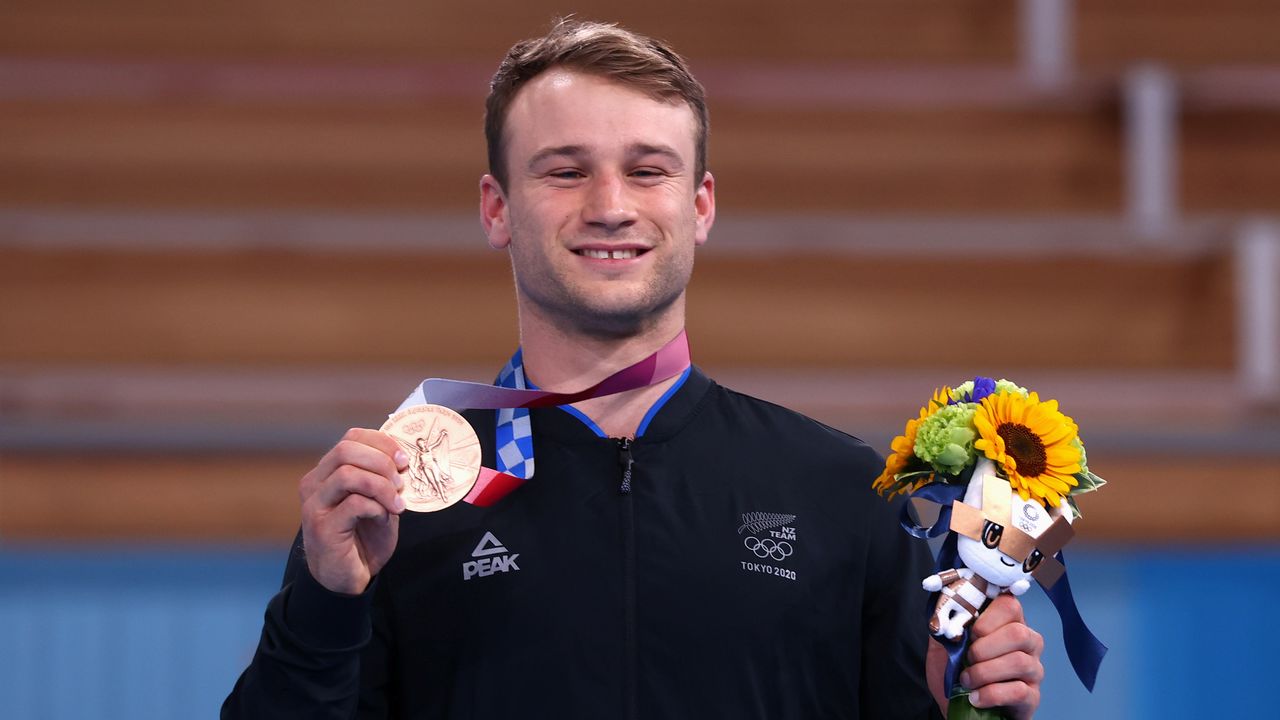 TOKYO (Reuters) - An admitted adrenaline junkie New Zealand Dylan Schmidt said he gave up skateboarding and BMX for the high of trampoline and got the ultimate rush on Saturday winning New Zealand's first ever Olympic medal in the event with a bronze at the Tokyo Games.

The dangers of high-flying acrobatics sports like the trampoline, where athletes launch themselves 10 metres into the air then twist themselves into knots performing 10 tricks in 25 seconds, are clear and brought into sharp focus at the Tokyo Games by Simone Biles's struggles with the "twisties".

Getting the "twisties", or disorientation while in the air, might not just cost you a medal but cost you your life.

"It's a horrible feeling I can tell you that," said Schmidt, adjusting the New Zealand flag draped across his shoulders. "Competing at the Games is so stressful I can't tell you how stressful it is.

"Then you have something thrown in like when you are getting lost in the air and you don't quite know where you are. It's hard, man.

"I've had it before and to bounce back it usually takes a few days to build that confidence back. The sport is hard."

A Youth Olympic gold medallist, Schmidt returned to the podium in Tokyo after a seventh place finish at the 2016 Rio Games.

It was an anxious wait for the 24-year-old Aucklander who was sitting second in medal position behind China's Dong Dong with the two Belarusians Ivan Litvinovich and Uladzislau Hancharou still to go.

Litvinovich would grab the gold but Hancharou, the 2016 Olympic champion, faltered and finished fourth.

I was sitting in second with two to go so second third or fourth so when I popped up about Vlad (Hancharou) I was just over the moon," said Schmidt. "I put so much into this performance, it is honestly pretty surreal but a really good feeling to win this medal for myself and for my country, I'm super proud to make history.

(Reporting by Steve Keating in Tokyo. Editing by Christian Radnedge)