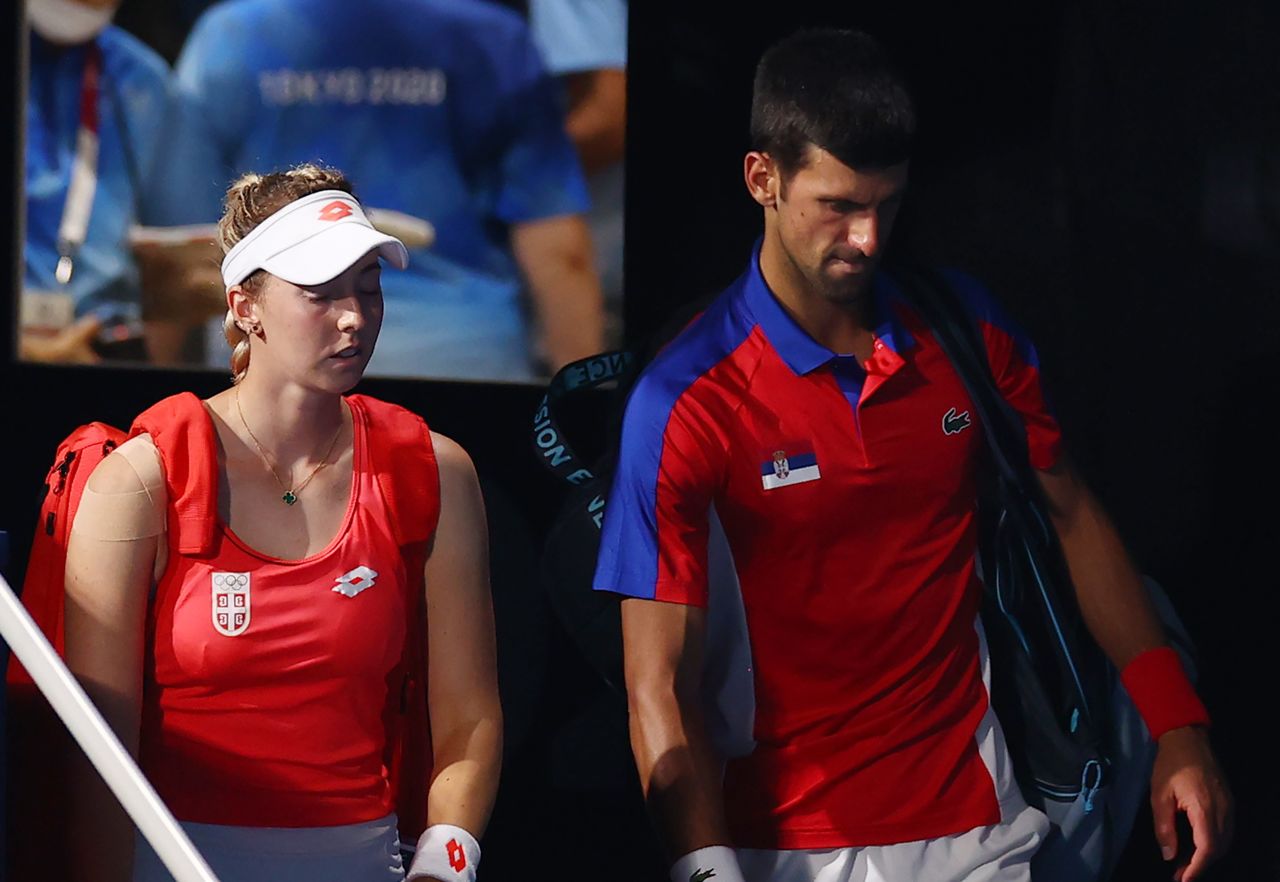 TOKYO (Reuters) -World number one and 20-times Grand Slam champion Novak Djokovic will leave the Olympics without a medal for the third Games in succession after pulling out of Saturday's mixed doubles bronze medal match with a shoulder injury.

The Serbian, who won a singles bronze in Beijing in 2008 but failed to earn a podium place at London, Rio and now Tokyo, withdrew from the mixed doubles minutes after losing to Spain's Pablo Carreno Busta in the singles bronze medal match.

His withdrawal from the mixed doubles means Ash Barty and John Peers bag a bronze medal for Australia.

Djokovic also lost to Germany's Alexander Zverev on Friday in the singles semi-finals, ending his hopes of this year winning a 'Golden Slam', which is Olympic gold and all four Grand Slams in a calendar year.

He has already won the Australian and French Open plus Wimbledon with the U.S. Open, the last of the four majors, still to come.

"I do have a regret for not winning a medal for my country and opportunities missed both in mixed doubles and singles and, yeah, I just didn't deliver yesterday and today," Djokovic told reporters.

"The level of tennis dropped also due to exhaustion, you know, mentally and physically."

Players have struggled with the Tokyo heat and humidity throughout the tournament, requiring cold showers, ice packs and other cooling fans.

"But I don't regret coming to the Olympics at all," he said. "Of course not. I believe there is no coincidence in life, everything happens for a reason and I had some heartbreaking losses at the Olympic Games and some big tournaments in my career."

Djokovic, 34, pledged to give it one more shot at the Olympics in three years' time in Paris.

"I know that I will bounce back. I will try to keep going for the Paris Olympic Games. I will fight for my country to win medals. Sorry that I disappointed a lot of sports fans in my country, but that's sport."

The Serb can still win all four majors in a calendar year - only achieved in the men's game by Don Budge and Rod Laver (twice) - when he competes at the U.S. Open which starts on Aug. 30.

"The consequences physically hopefully will not create the problem for me for (the) U.S. Open. So that's something that I'm not sure about right now, but I'm not regretting for giving it my all because at the end of the day when you play for a country that's necessary."

"I know that those losses have usually made me stronger."