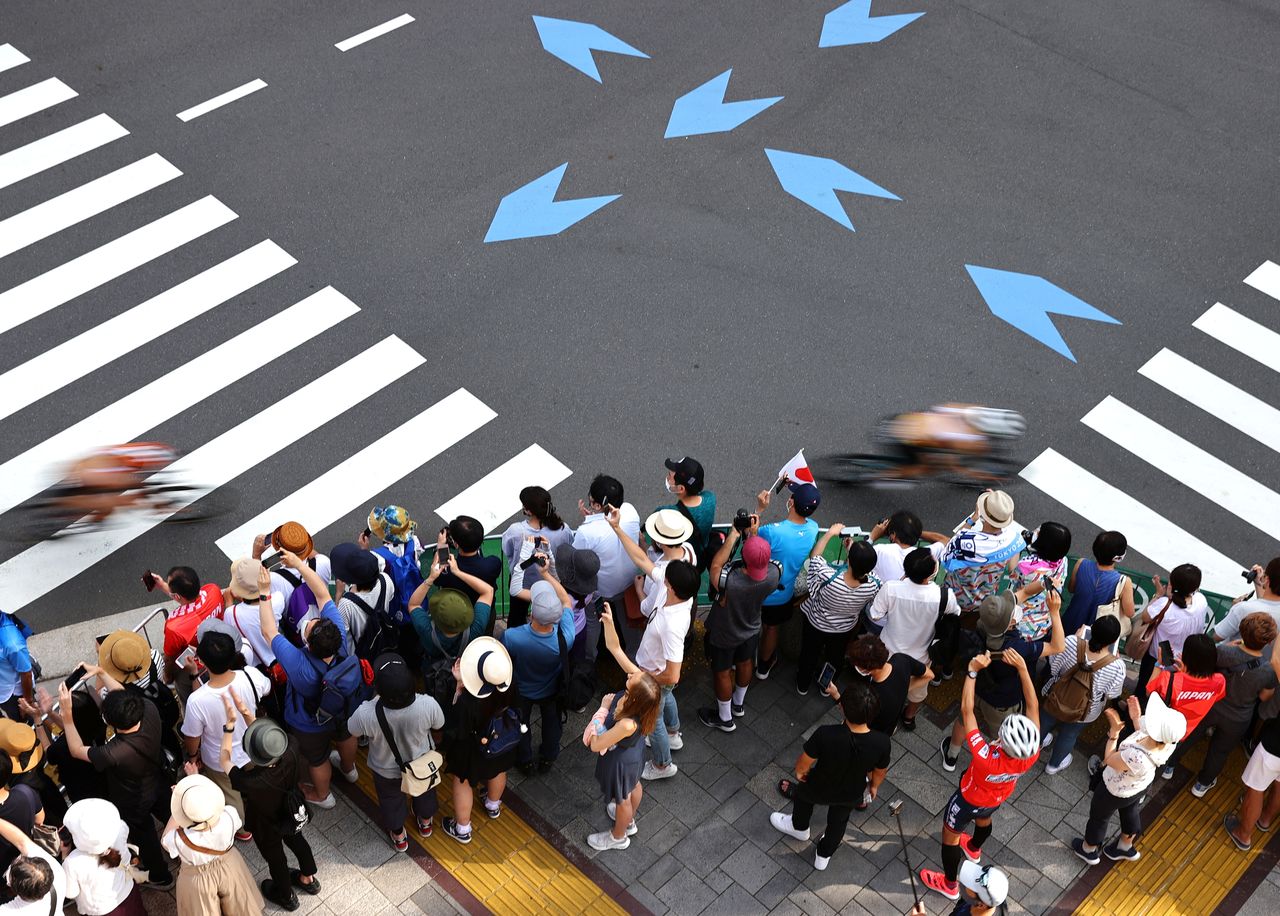 TOKYO (Reuters) - Defying sweltering heat and a ban on spectators, crowds of fans thronged the streets of Tokyo on Saturday for the chance to see an Olympic triathlon up close.

Spectators aren't allowed at most venues at the Tokyo Games, to help prevent the spread of COVID-19. That has left athletes competing in front of empty stands, save for a scattering of https://www.reuters.com/lifestyle/sports/olympics-all-dressed-up-with-no-one-help-tokyo-volunteers-sit-spectators-2021-07-25 volunteers or members of their national delegations https://www.reuters.com/lifestyle/sports/olympics-an-olympics-without-spectators-noisy-delegations-make-up-absent-fans-2021-07-27.

But on Saturday, big crowds turned out to line the streets at the Odaiba Marine Park on the Tokyo waterfront, defying Olympic staff who carried signs and bullhorns asking them not to gather along the roadside to watch the event.

"I really should not be here, but I would have regretted it if I missed this opportunity so I decided to come," said Keichi Hishida, a 38-year-old cycling enthusiast.

Wearing masks, the crowd spilled onto stairways and elevated walkways, taking pictures and craning their necks to see the athletes. Some carried parasols and many wore hats in the heat and sun of high summer.

Japan's strong showing in the Games - it is now second on the medal tally https://graphics.reuters.com/OLYMPICS-2020/MEDALTALLY/rlgpdynkjvo/media-embed.html just behind China - may have helped the turn-out, even as people remain concerned about holding the Games amid the pandemic.

"The athletes work so hard that I think there are people who even if they were initially opposed to the Games, have ended up getting behind the Games," said 48-year-old Tokyo resident Yukari Hosaka, herself a marathon runner.

Prime Minister Yoshihide Suga has asked the Japanese to stay home and watch the Games on television.

Unlike the strict lockdowns seen elsewhere, Tokyo is under a looser state of emergency that includes curbs on restaurant hours and the serving of alcohol. It is largely reliant on self-enforcement, however, and authorities can't order people off the streets.

While athletes and Olympic visitors have remained in a "bubble" with regular testing for the coronavirus, Tokyo residents are out and about https://www.reuters.com/lifestyle/sports/tale-two-cities-bubble-tokyo-outside-2021-07-29, especially younger people.

On Saturday, new infections in Tokyo hit a record above 4,000 for the first time.

Inside the bubble, organisers have reported a total of 241 infections related to the Olympics since July 1, a miniscule number given the tens of thousands of people visiting.

Shunya Arai, 49, acknowledged there was an infection risk from being in a crowd, but said he also saw people drinking in the city late at night without masks.

"I think decreasing that risk should be the priority," he said.

"How are the priorities set? That's what I question."