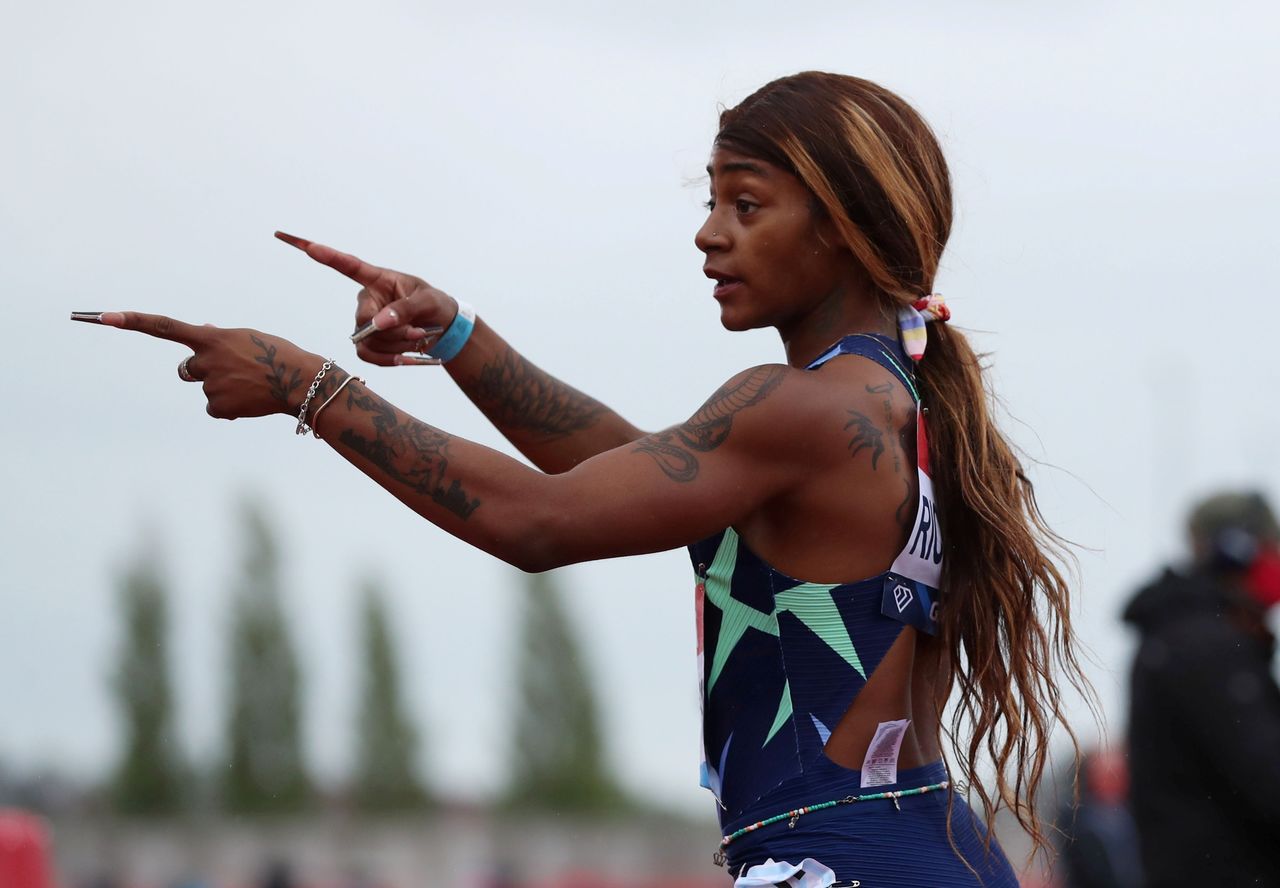 TOKYO (Reuters) -Sprinter Sha'Carri Richardson, who was ruled out of the Olympics after being temporarily banned for testing positive for cannabis, on Sunday applauded Jamaica's sweep of the 100 metres led by Elaine Thompson-Herah's record-breaking performance.

Thompson-Herah obliterated the Olympic record with a blistering 10.61 seconds sprint on her way to defend the title she won in Rio five years ago, becoming the second fastest woman in history and elevating herself to among the greats in the iconic 100m event.

"Congratulations to the ladies of Jamaica for the clean sweep," Richardson, who had been a Tokyo medal contender before the ban, wrote https://twitter.com/itskerrii/status/1421603429936414726?s=20 on Twitter. "Powerful, strong black women dominating the sport."

The 21-year-old Richardson streaked to victory in the 100m at the U.S. Olympic trials in June, and was expected to be one of the top stars at the Games in Japan.

She represented the best U.S. chance of a first gold since Gail Devers won in 1996, and after Marion Jones was stripped of the 2000 title for doping offences.

But things unravelled for her after she won the U.S. trials with an impressive 10.86s and tested positive for cannabis and was banned for a month, which ruled her out of the tournament.

Richardson said she was dealing with the death of her mother at the time and the United States Anti-Doping Agency (USADA) said that her ban was reduced to one month because she had used cannabis out of competition and it was unrelated to sport performance.

On Saturday in Tokyo, the lone American competing in the final Teahna Daniels finished seventh with a time of 11.02.

"TO THE PODIUM WE GO"

It was one of the fastest finals on record with six sprinters out of the eight finalists running under 11 seconds, with Thompson-Herah leading the pack.

"I think I could've gone faster if I wasn't pointing and celebrating early," she said later.

Silver medallist Fraser-Pryce, who said Tokyo 2020 would be her last Olympics, tweeted https://twitter.com/realshellyannfp/status/1421671773351858184?s=20 her satisfaction at seeing Jamaica's dominance in the race.

"Legacy isn't just about winning, it's also about gracefully watching others shine. Even through disappointment," she wrote. "Congratulations to 2 amazing athletes Elaine and Shericka. To the podium we go!!"

Jamaica's clean sweep confirmed its supremacy in the event, with 10 of the 12 available women's 100m medals since 2008 going to them, including all gold.

On Saturday, Fraser-Pryce said the final showcased the level that female sprinting has achieved at the sport's biggest stage.

"I'm really excited that female sprinting is going (to) another level and that's truly remarkable," she told reporters. "It speaks to the depth that we have in terms of females."

Richardson could be part of that future of the sport.