LONDON/WASHINGTON (Reuters) -The United States and Britain said on Sunday they believed Iran carried out an attack on an Israeli-managed petroleum product tanker off the coast of Oman on Thursday that killed a Briton and a Romanian, both pledging to work with partners to respond.

Iran earlier on Sunday denied it was involved in the incident, after it was blamed by Israel.

"Upon review of the available information, we are confident that Iran conducted this attack, which killed two innocent people, using one-way explosive UAVs," U.S. Secretary of State Antony Blinken said in a statement, adding there was "no justification" for the attack.

"We are working with our partners to consider our next steps and consulting with governments inside the region and beyond on an appropriate response, which will be forthcoming," Blinken said.

British Foreign Secretary Dominic Raab said earlier in the day that UK assessments had concluded that it was highly likely that Iran had used one or more drones to carry out the "unlawful and callous" attack.

"We believe this attack was deliberate, targeted, and a clear violation of international law by Iran," he said. The UK was working with international partners on a "concerted response," he added.

The U.S. Navy, which was escorting the tanker with the USS Ronald Reagan aircraft carrier, said on Saturday that early indications "clearly pointed" to a drone attack.

Israeli Prime Minister Naftali Bennett had accused Tehran of "trying to shirk responsibility" for the attack, and called its denial "cowardly".

Speaking during a weekly meeting of his cabinet on Sunday, Bennett said: "I declare unequivocally: Iran is the one that carried out the attack on the ship," adding that intelligence supported his claim.

"We, in any case, have our own way to relay the message to Iran," Bennett said. Israel's foreign minister said earlier the incident deserved a harsh response.

Iranian Foreign Ministry spokesman Saeed Khatibzadeh told a weekly news conference on Sunday that the "Zionist regime (Israel) has created insecurity, terror and violence... These accusations about Iran's involvement are condemned by Tehran".

"Such accusations are meant by Israel to divert attention from facts and are baseless," Khatibzadeh said.

There had been varying explanations for what happened to the tanker. Zodiac Maritime described the incident as "suspected piracy", and a source at the Oman Maritime Security Center said it was an accident that occurred outside Omani territorial waters.

Iran and Israel have traded accusations of carrying out attacks on each other's vessels in recent months.

Tensions have risen in the Gulf region since the United States reimposed sanctions on Iran in 2018 after then-President Donald Trump withdrew Washington from Tehran's 2015 nuclear deal with major powers.

(Reporting by Jeffrey Heller in Jerusalem, Paul Sandle in London, and Michael Martina in WashingtonWriting by Parisa HafeziEditing by Mark Heinrich, Frances Kerry and Andrea Ricci) 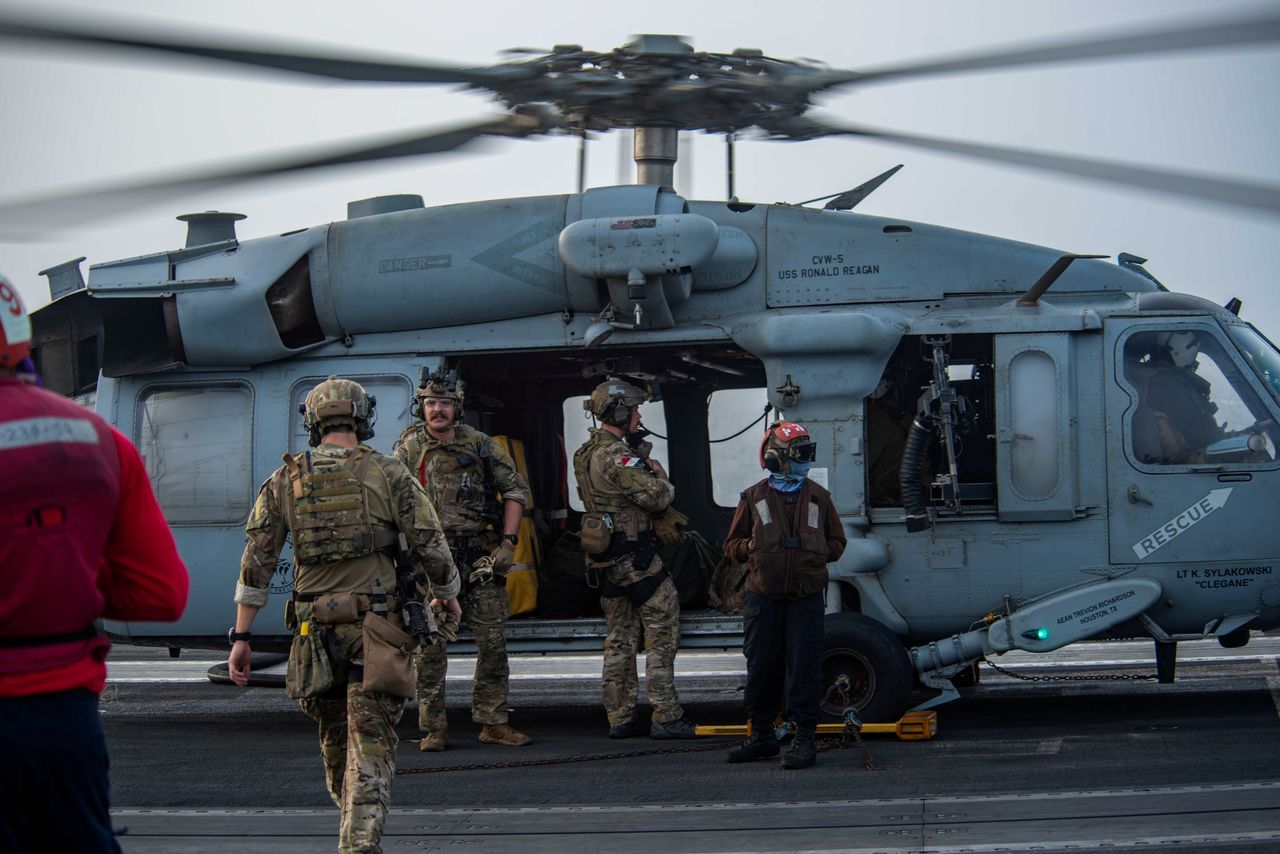 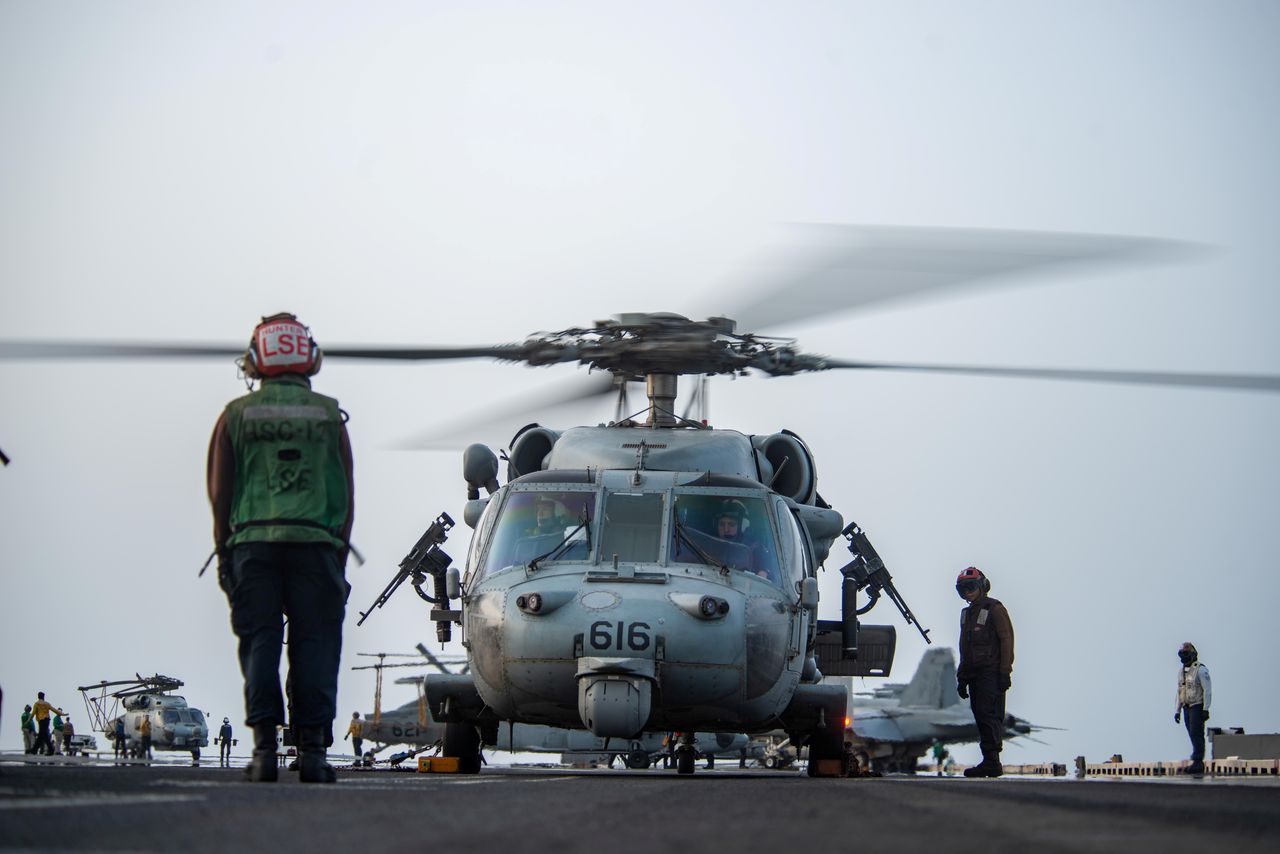 Sailors prepare an MH-60S Sea Hawk helicopter, attached to the “Golden Falcons” of Helicopter Sea Combat Squadron (HSC) 12, to launch on the flight deck of aircraft carrier USS Ronald Reagan (CVN 76), in response to a call for assistance from the Mercer Street, a Japanese-owned Liberian-flagged tanker managed by Israeli-owned Zodiac Maritime, in the Arabian Sea, in the Arabian Sea July 30, 2021. Picture taken July 30, 2021. U.S. Navy/Handout via REUTERS