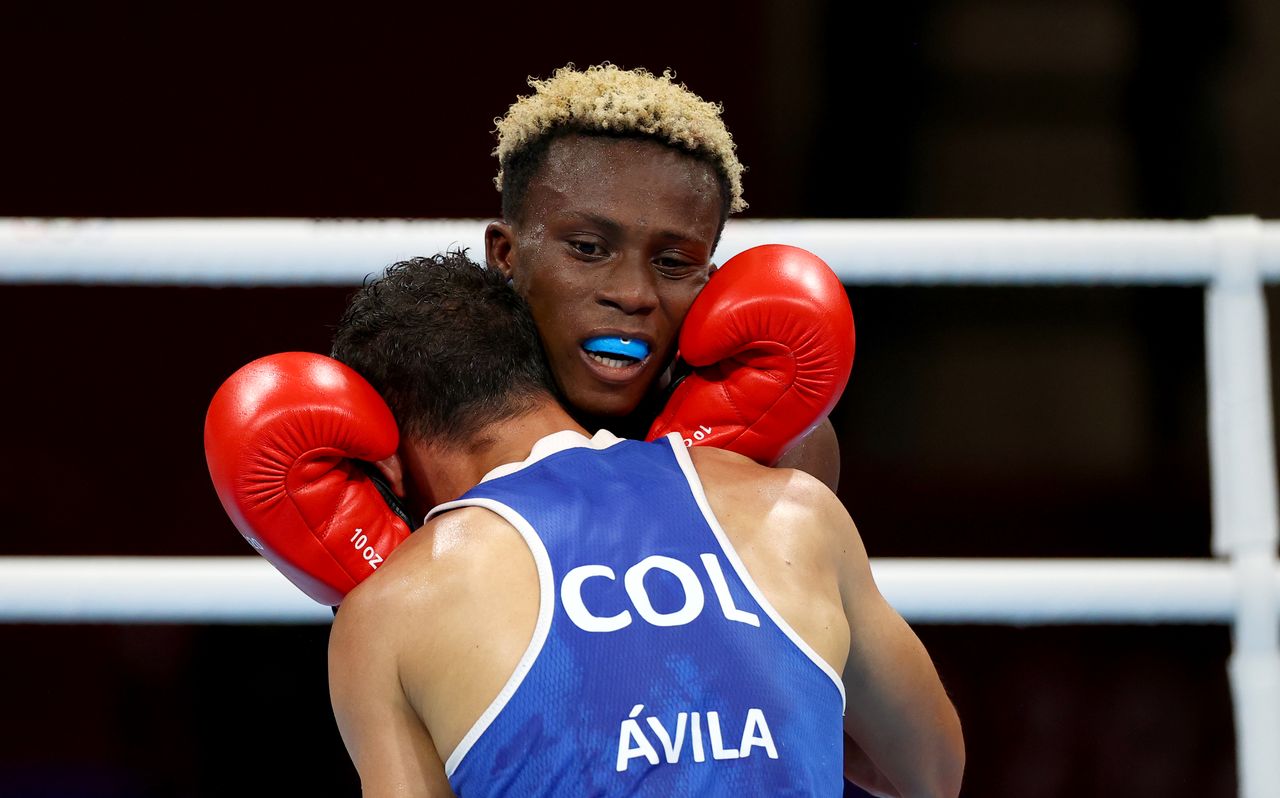 TOKYO (Reuters) -A dramatic day of action before the gold-medal bouts start featured a disqualification that led to a furious Frenchman refusing to budge from the ring, while Samuel Takyi secured Ghana's first Olympic boxing medal in almost 50 years.

In the last match of the early session at Tokyo's Kokugikan arena on Sunday, French super heavyweight Mourad Aliev was disqualified for what the referee deemed an intentional headbutt - a call he protested with an hour-long ringside sit-in https://www.reuters.com/lifestyle/sports/boxing-frances-aliev-disqualified-protests-with-sit-in-ringside-2021-08-01.

That was after the Moscow-born Frenchman expressed his contempt for the decision by spitting out his mouth guard and kicking it away, flashing offensive gestures twice and shaking and punching a television camera.

"It's totally unfair -- I was winning the match," a calmer Aliev told a throng of reporters after finally abandoning his ringside spot. The first round had gone to Aliev 3-2.

His opponent, Britain's Frazer Clarke, suffered cuts on his face and won the bout with four seconds left in the second round.

The day turned out far better for Ghanaian featherweight Samuel Takyi, who overpowered his Colombian opponent Ceiber Avila to win at least a bronze -- the country's first boxing medal in nearly 50 years. It will also be the country's first medal at the Olympics since Ghana won bronze in soccer in 1992.

As a panting Avila retreated to his corner after the final bell, 20-year-old Takyi jumped up on the ropes to salute his Ghanaian team mates in the stands, then pranced over to his corner to show off with a few push-ups.

"I want boxers in my division to see me," he said about his youthful display. "I'm the best and I will be the best ever. I'm going to do something, I'm going to make a great history."

Takyi will meet American Duke Ragan in the semi-finals.

Elsewhere, Filipino middleweight Eumir Marcial knocked out Armenia's Arman Darchinyan with a right hook to cruise into the semi-finals, securing him at least a bronze medal.

"It's like a dream come true," Marcial said of his guaranteed medal.

"When I was young and started boxing we talked about this with my father and... I'm an Olympic medallist now," added Marcial, who was trained by his father early on and now works with Hall-of-Fame trainer Freddie Roach in the United States.

"But I want the gold so I will do my best to give my best performance and leave the rest to God."

It will be a Britain versus Cuba final also in the light-heavy category. Briton Ben Whittaker beat Russian Imam Khataev in the semi-finals and Cuban Arlen Lopez defeated Loren Berto Alfonso Dominguez, who moved from his native Cuba to Azerbaijan to improve his chances at competing at the top level.

Boxing powerhouse Cuba ended their winning streak on Sunday with the first loss among their seven boxers after American Richard Torrez Jr grabbed a split-decision victory over Dainier Pero in the super-heavy quarter-finals.

The first finals are on Tuesday.