By Steve Keating and Mitch Phillips

TOKYO (Reuters) -Simone Biles retook the gymnastics stage on Tuesday after a week's absence, electrifying the Tokyo Olympics on a day that saw world records smashed and organisers investigate Belarus's treatment of an athlete now in diplomatic protection.

The return of the American, considered by many the greatest gymnast ever, ensured a blockbuster finale https://www.reuters.com/lifestyle/sports/gymnastics-chinas-guan-wins-gold-balance-beam-2021-08-03 for the sport at the Ariake Gymnastics Centre as Biles took the bronze.

She had abruptly dropped out of the team event seven days ago, citing mental health issues and increasing global awareness of the pressures elite athletes face.

"I was proud of myself just to go out there after what I've been through," said Biles, who won four golds and a bronze in Rio five years ago. "I'll treasure this one a lot more after everything I have been through."

On the track, Norway's Karsten Warholm shattered his own world record in the men's 400 metres hurdles by almost a second with a blistering 45.94-second run, besting American Rai Benjamin, who also beat last month's record.

"Man, it's so crazy. It's by far the biggest moment of my life," Warholm said after carving his name among the greats of athletics history and crouching in apparent disbelief on the track. "You know the cliche that it hasn't sunk in yet? I don't think it has, but I feel ecstatic."

In women's cycling, Germany beat Britain for the gold in team pursuit in a thrilling final after each team traded world records in the heats.

Away from the competition, the International Olympic Committee said it expected a report https://www.reuters.com/article/olympics-2020-ioc/update-1-olympics-ioc-awaiting-report-from-belarusian-olympic-committee-idUSL8N2PA0F4 later in the day from the Belarusian team on the case of sprinter Krystsina Tsimanouskaya, who sought refuge https://www.reuters.com/lifestyle/sports/belarus-athlete-in-hands-authorities-ioc-2021-08-02 in the Polish embassy in Tokyo on Monday after refusing her team's orders to fly home.

She was expected to fly on Wednesday to Poland, which has offered her a humanitarian visa. The IOC spoke twice on Monday to Tsimanouskaya, who was in a safe and secure place, said spokesman Mark Adams.

Tsimanouskaya told the German newspaper Bild that her rupture with the team had not initially been about politics. "I could never have imagined that would turn into such a big political scandal."

Outdoor athletes were once again battling the Tokyo summer weather as well as their competitors, with highs around 33 degrees Celsius (91 Fahrenheit) and rain-forest humidity, while missing fans, banned from almost all events due to COVID-19,

The lack of spectators, however, is not depressing viewership https://www.reuters.com/article/olympcis-2020-audience/olympics-surfing-skating-boosts-viewership-lack-of-fans-has-zero-impact-ioc-idUSL1N2PA059 figures, the IOC said, as debut events such as surfing and skateboarding attract a global buzz.

Host city Tokyo is enduring its fourth coronavirus state of emergency with infections spiking https://www.reuters.com/world/asia-pacific/japan-limits-hospitalisation-covid-19-patients-most-serious-cases-surge-2021-08-03 to record highs and hospitals under increasing strain.

Although COVID-19 has been contained in the Olympic "bubble" through strict testing and monitoring, positive tests forced Greece to pull out of artistic swimming.

Biles, her hopes of winning six gold medals in Tokyo shattered, has been battling the "twisties" - where gymnasts become disoriented during their gravity-defying sequences - which forced her to pull out of events.

The winner of 32 Olympic and world championship medals said she must "process this Olympics" before considering Paris 2024. "Right now I’m going to focus on myself a little bit more often rather than push stuff under the rug."

Japan's Naomi Osaka, who had cited depression in taking a break from tennis in recent months, lost to the world No. 42 in the third round last week, one of many surprising results in this year's Games.

Also making history, the first openly transgender Olympian, New Zealand weightlifter Laurel Hubbard, said she does not consider herself a trailblazer and just wanted to be seen as any other athlete on sport's biggest stage.

Hubbard made an unexpectedly early exit on Monday, eliminated 10 minutes into her +87 kg contest, ending an appearance that provoked controversy.

Transgender rights advocates applauded her being allowed to compete, while some former athletes and activists believe her background gives her an unfair physiological advantage and undermines efforts for women's equality in sport.

Meanwhile, some Australian athletes damaged their rooms in the athletes' village before departing while the team's mascots went missing. 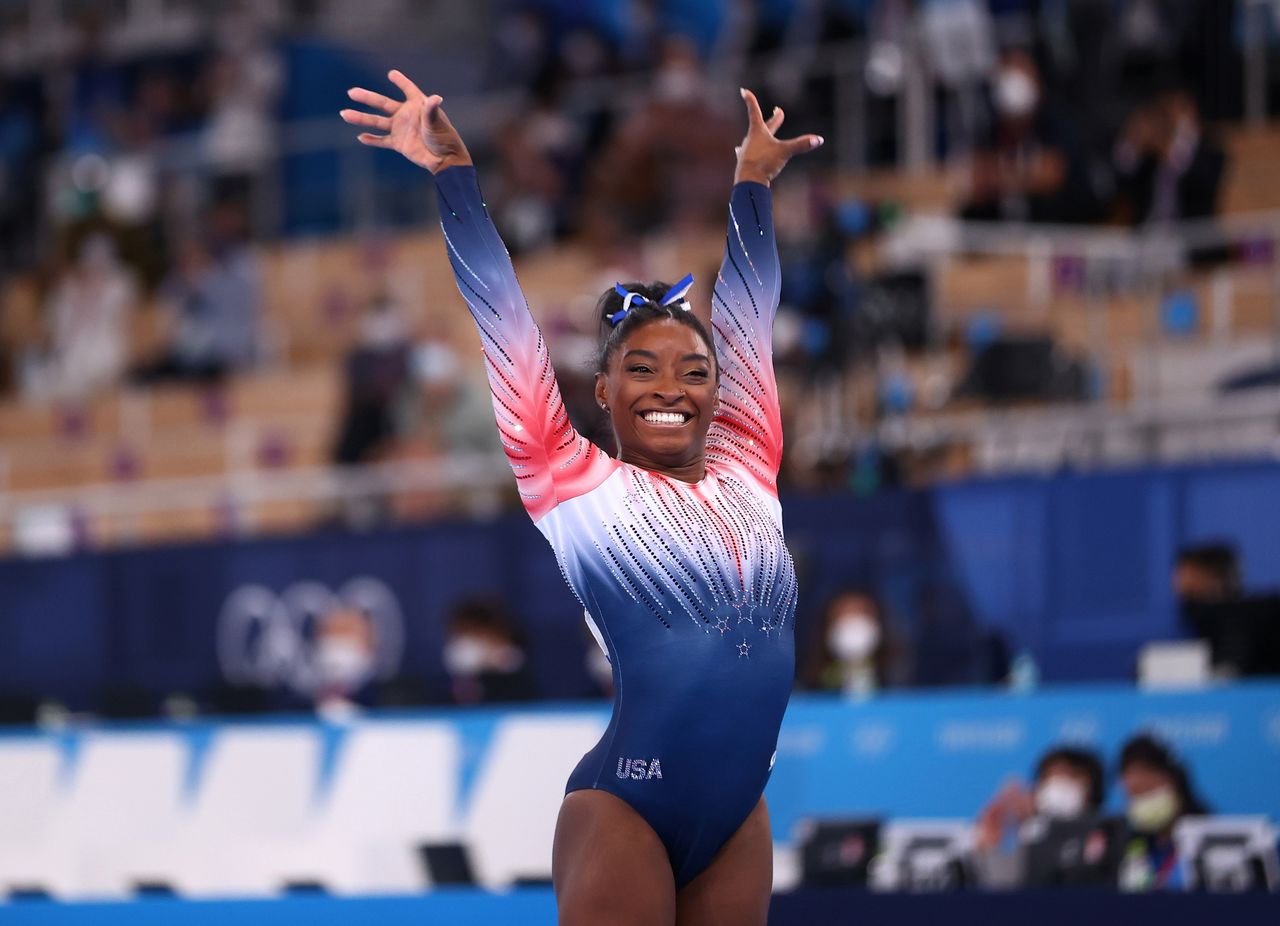 Simone Biles of the United States reacts after performing on the balance beam. REUTERS/Lindsey Wasson 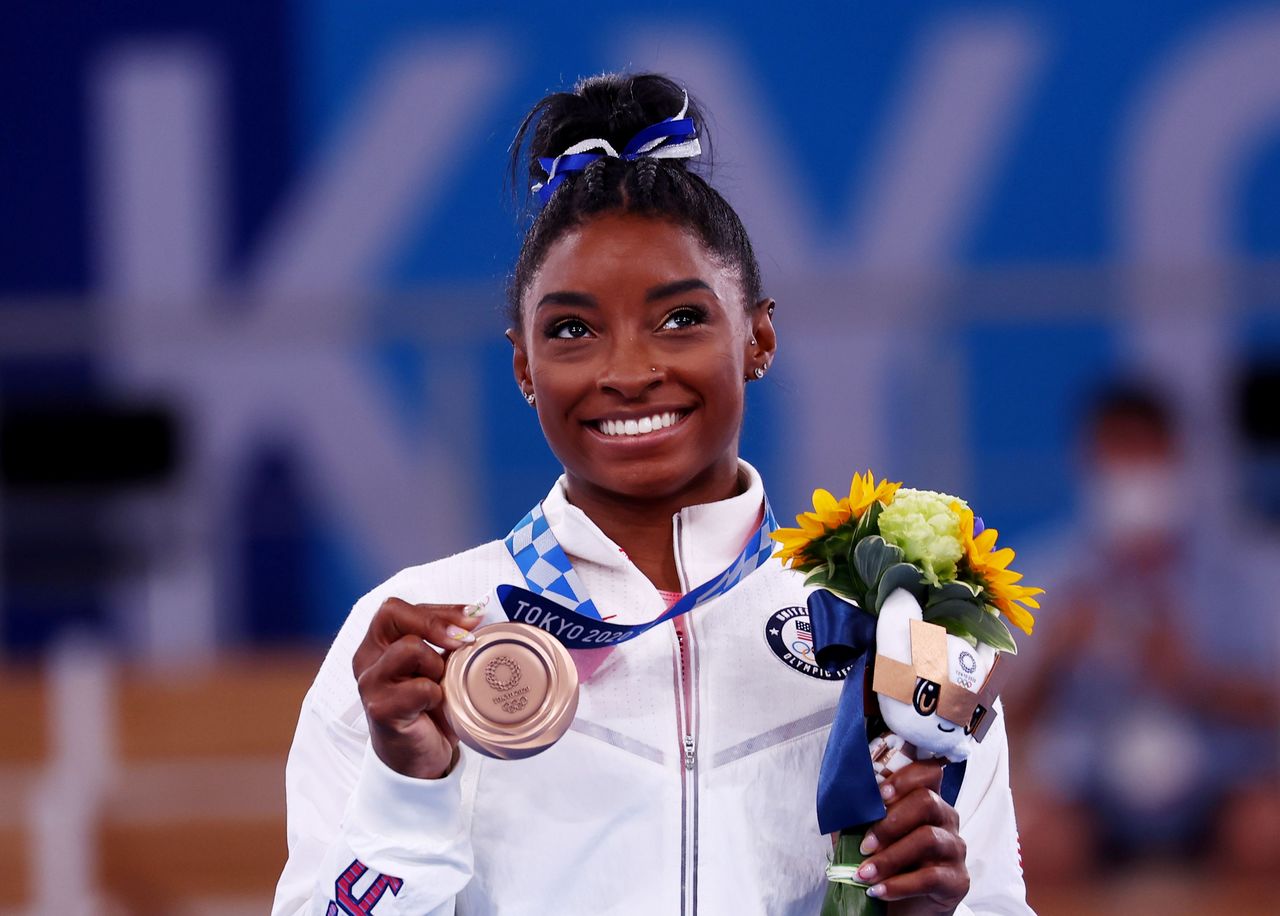 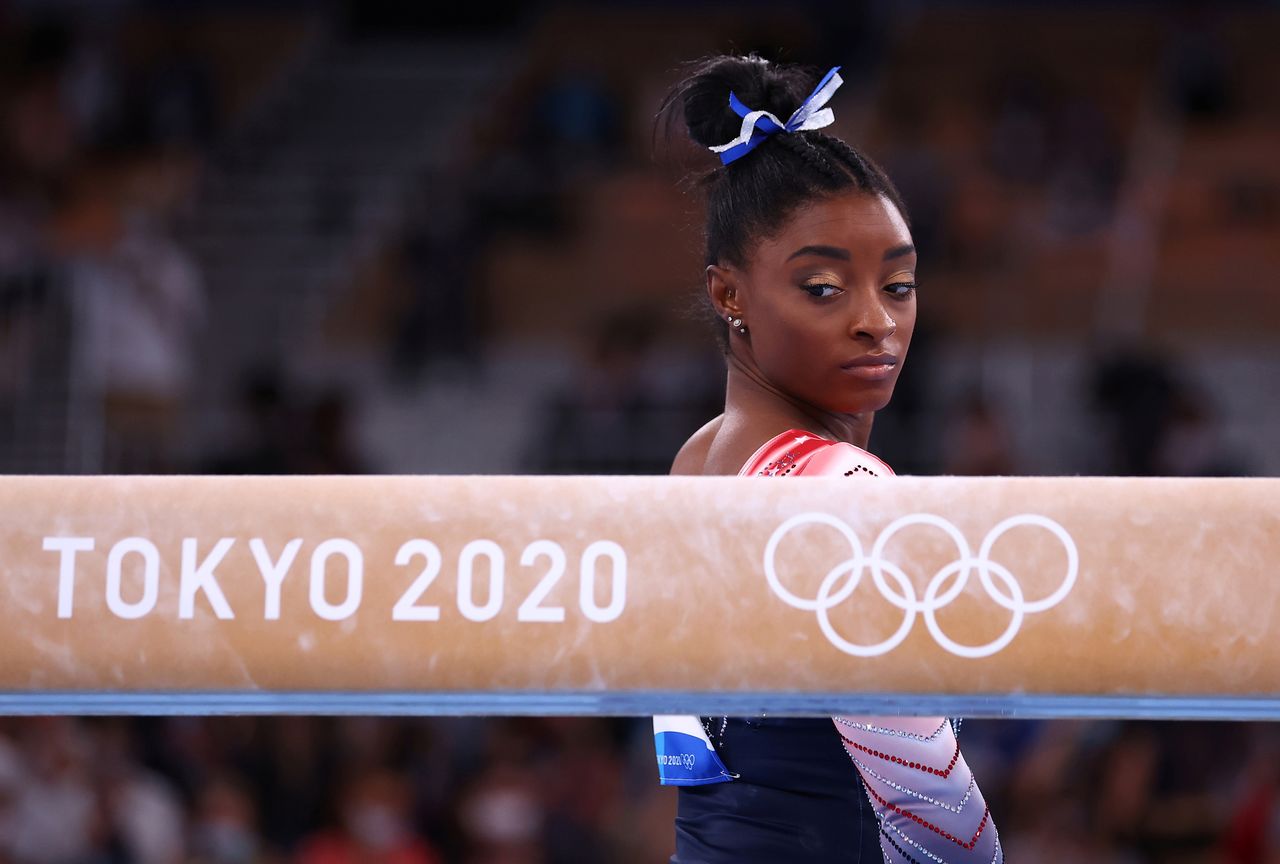 Simone Biles of the United States before competing REUTERS/Mike Blake 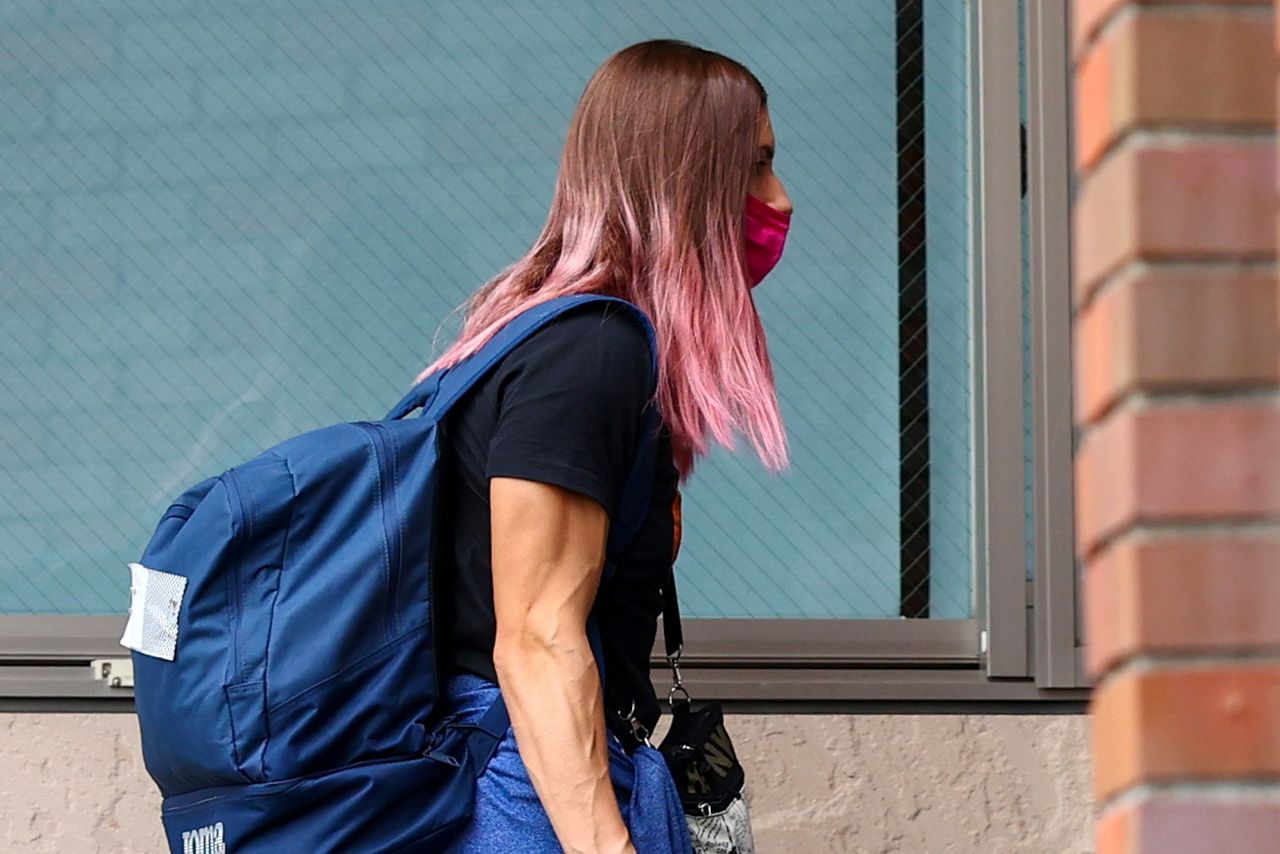 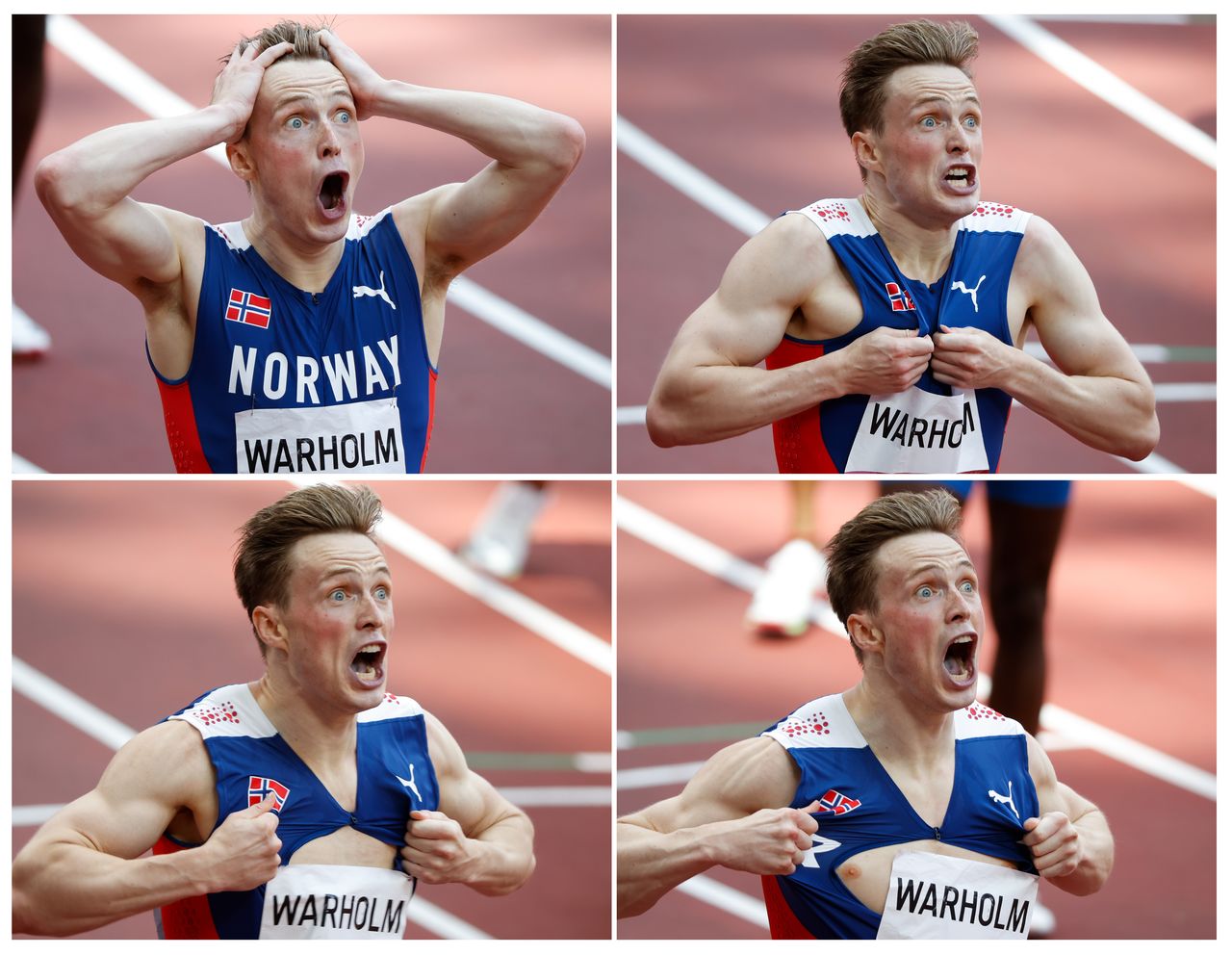 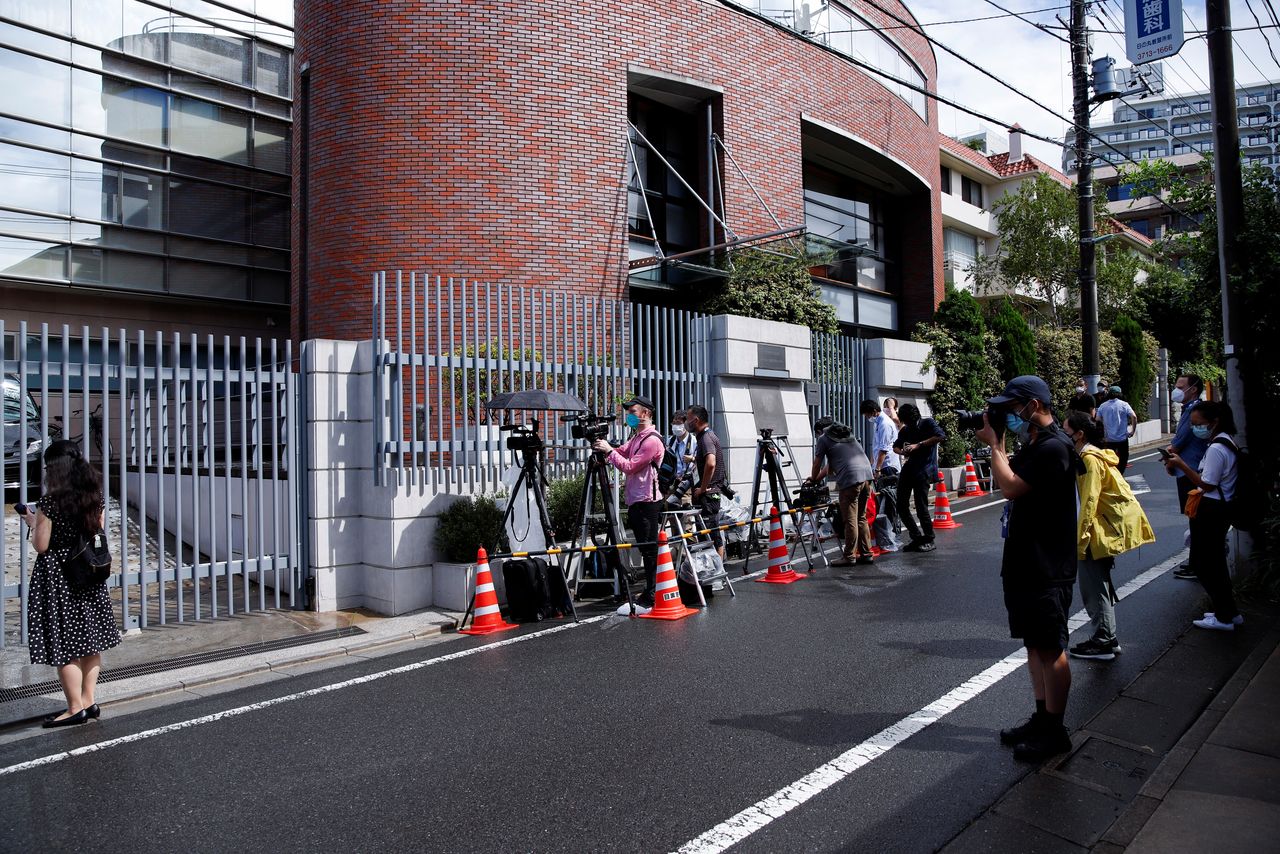 Members of the media stand in front of the Polish Embassy in Tokyo where Belarusian sprinter Krystsina Tsimanouskaya is staying, in Tokyo, Japan August 3, 2021. REUTERS/Androniki Christodoulou 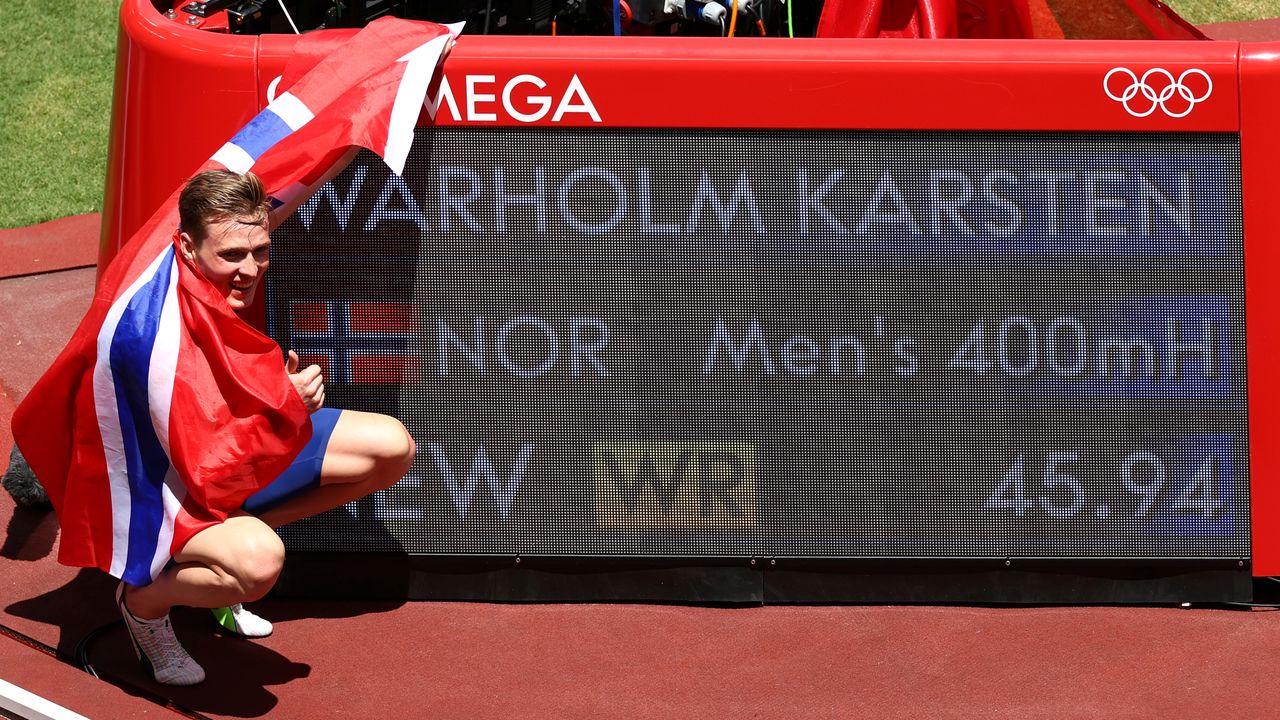 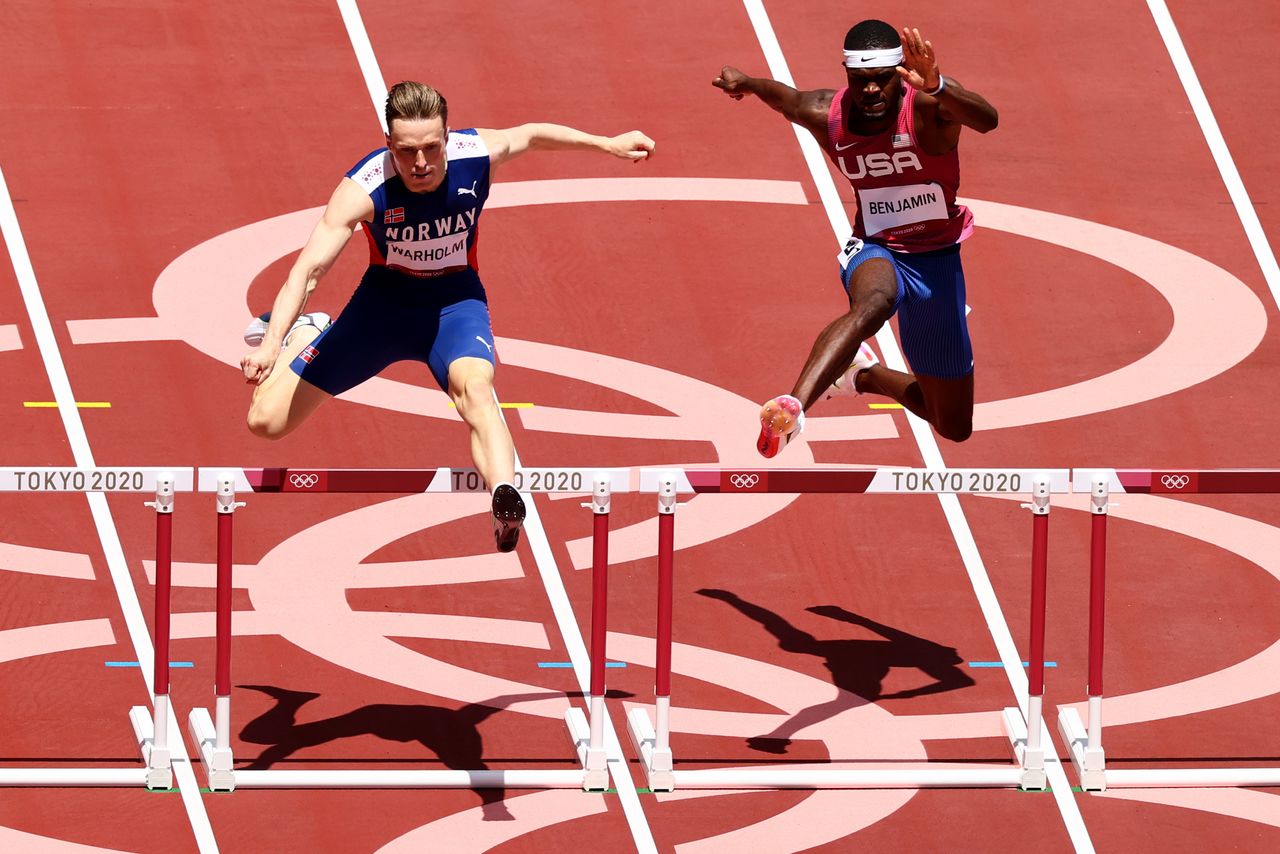 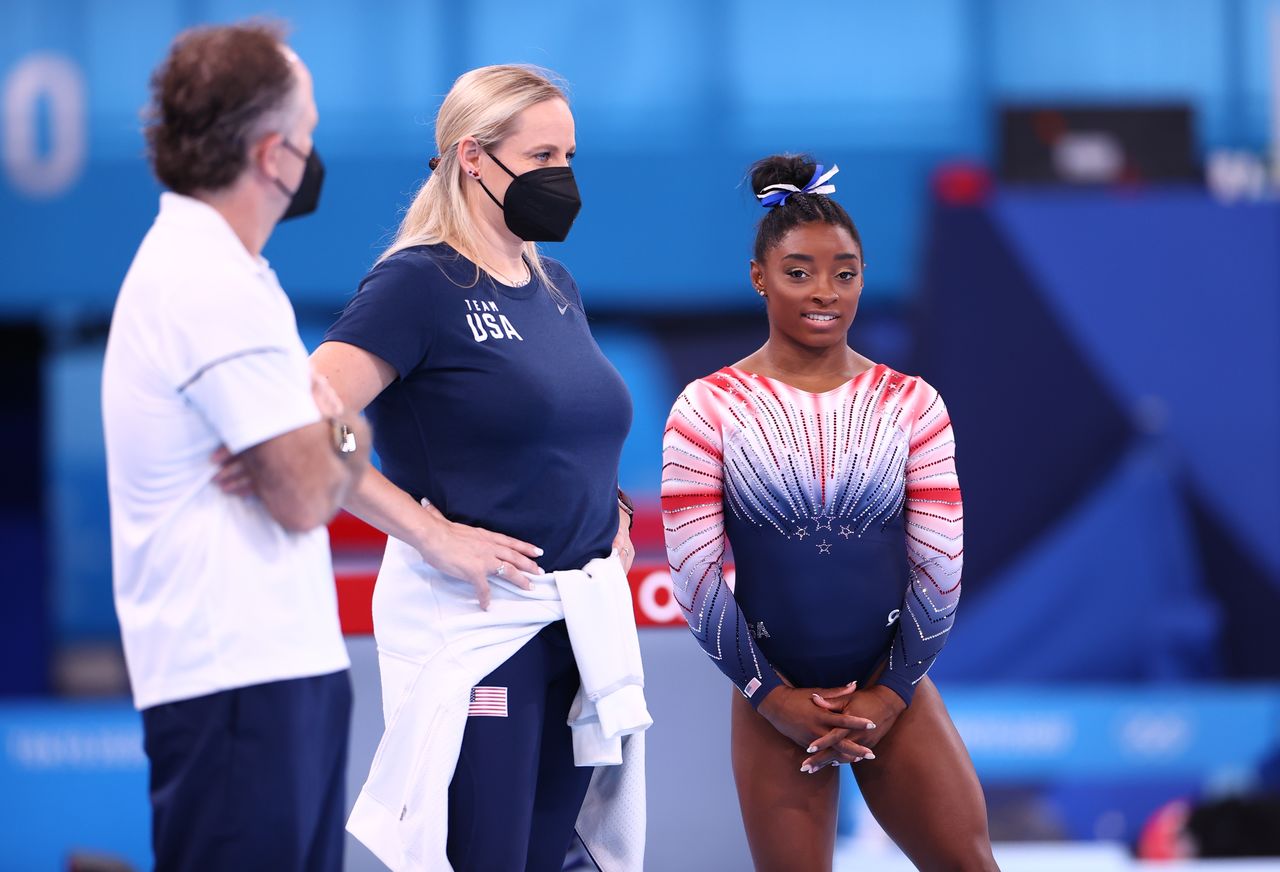 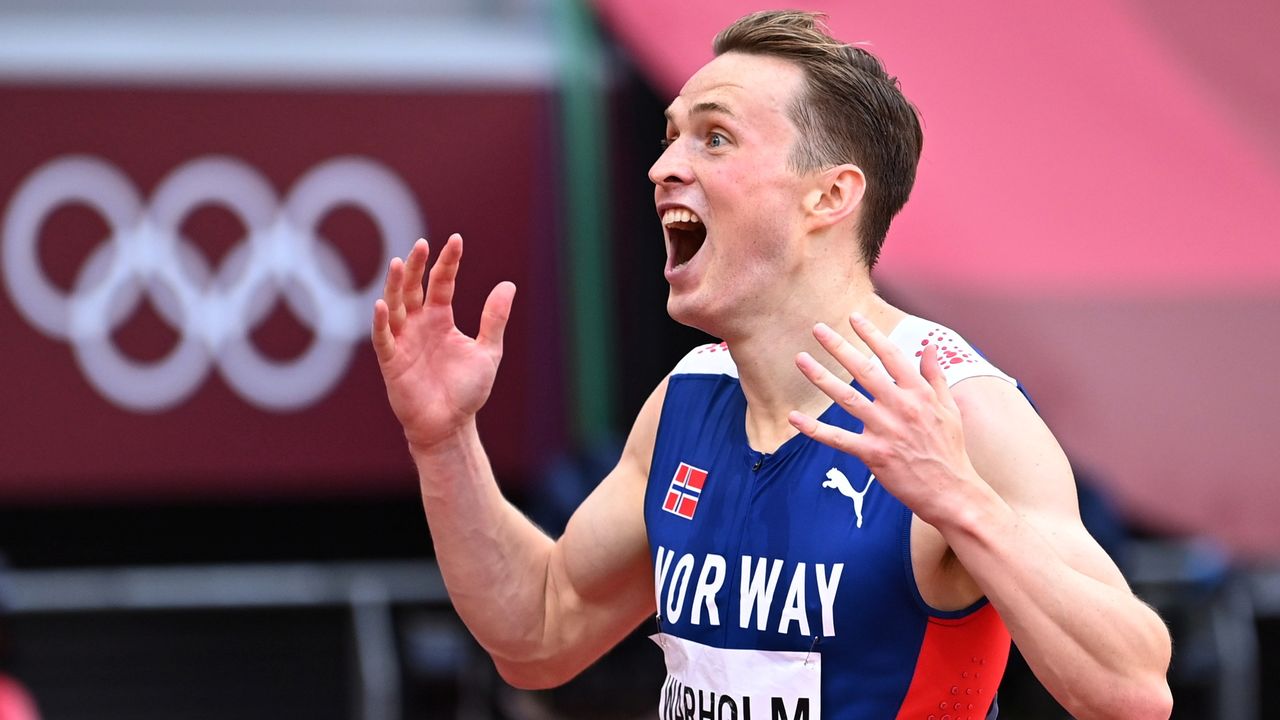 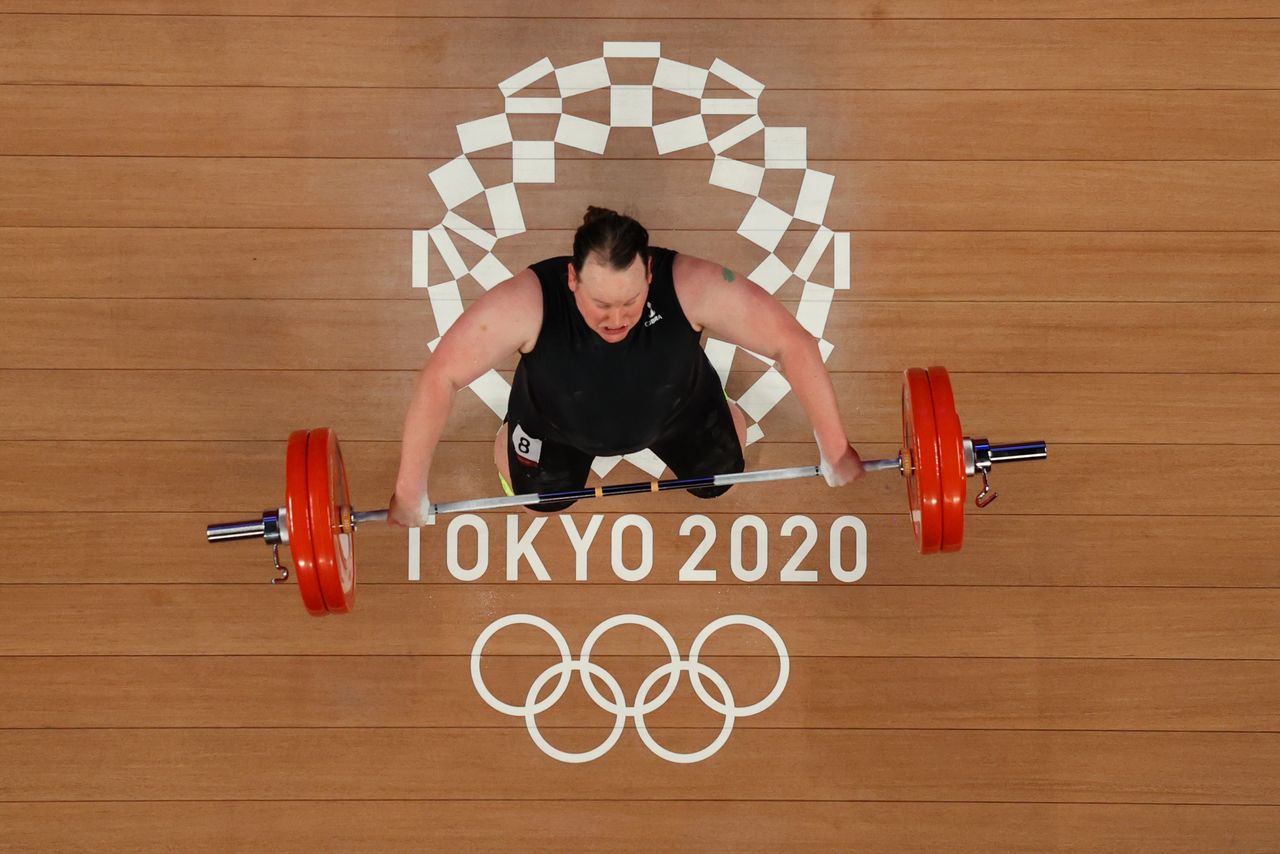