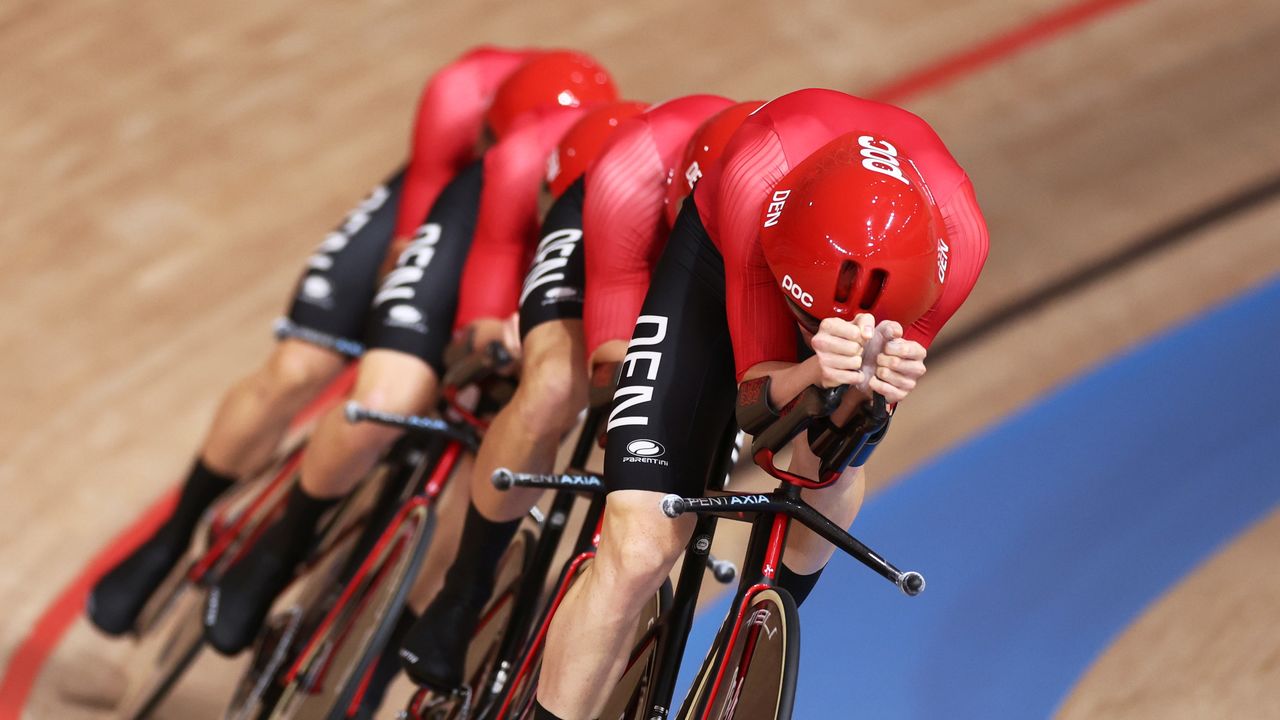 IZU, Japan (Reuters) -Britain's stranglehold on the Olympic men's team pursuit ended in controversial and chaotic circumstances as they were outclassed by Denmark on a dramatic afternoon at the Izu Velodrome on Tuesday.

The day began badly as Ed Clancy, part of the team that won gold in the blue-riband event in Beijing, London and Rio, withdrew from the Games with a back injury.

And things want from bad to worse.

After Italy broke the world record in their medal heat against New Zealand, Britain took to the track against world champions Denmark with the whiff of controversy in the air after allegations of 'shenanigans' aimed at the Scandinavians.

The British camp had complained that the skin-coloured tape the Danes had worn on their shins in the previous day's qualifying rides was illegal under UCI rules -- saying it was giving them an aerodynamic advantage.

The truth is the Danes, who arrived in Tokyo as favourites, did not need anything underhand to destroy a Clancy-less quartet.

With former British team pursuiter and aerodynamics whizzkid Dan Bigham as part of their staff, Denmark have ripped up Britain's blueprint of how to ride a 4km team pursuit.

Lasse Norman Hansen, Niklas Larsen, Frederick Madsen and Rasmus Pedersen were in a different league and reeled Britain in to such an extent that they caught Charlie Tanfield, who had replaced Clancy. There was more controversy, though.

Madsen, whose head was down and seemed unaware that he was about to catch a struggling Tanfield, effectively winning the heat, ploughed into the back of the British rider at 60kph.

Both crashed to the ground as the heat ended abruptly. For a while there was confusion with the Danes not sure whether they were through to Wednesday's gold-medal ride against Italy.

Eventually the result was made official, although anything else would have been a travesty as the Danes were going so fast that it looked likely they would snatch back their world record that the Italians, powered by Filippo Ganna, had broken.

Madsen said he had "lost some skin" in the crash while their coach said his rider could not be blamed.

"They should have flagged that the (British) team were split," he told reporters. "Our riders always do the last kilometre looking down, following the line."

Britain will not have the consolation of riding for a bronze medal on Wednesday and will ride off against Switzerland for an ignominious seventh place.

Earlier the British performance director Stephen Park had suggested Denmark should have been disqualified had the UCI followed its own rules.

"Overnight there were a number of teams who submitted a complaint including ourselves because we believe there was a clear breach of the regulation," Park told reporters.

"They decided to hold a meeting of the teams. They started the meeting by saying they had found that the Danes were in breach of the regulation and were issuing them with a warning."

The Danes did not wear the tape against Britain but were clearly not in need of any marginal gains.

They will need to break the world record again on Wednesday, however, according to Madsen, after Italy threw down the gauntlet with an astonishing 3:42.307 to pip New Zealand for a place in the final.