IZU, Japan (Reuters) -The talk during the protracted build-up to Tokyo 2020 was that Britain's days of sweeping all before them and plundering a golden bounty in the velodrome might be numbered.

Two days into the track cycling programme, the evidence suggests the doom-mongers were not far off the mark.

In the space of a head-spinning couple of hours at the Izu Velodrome high in the hills west of Tokyo on Tuesday, the British team's hold on three events in which they have enjoyed total Olympic domination was ripped away.

A fearsome foursome of German women destroyed Britain in the team pursuit final with their second world record of the day and third in 24 hours - inflicting a first-ever Olympic defeat on Britain's golden girl Laura Kenny.

Britain had won the team pursuit on its debut in the women's programme at London 2012 before repeating in Rio in 2016.

Shortly after that, Kenny's husband Jason was part of a British trio overpowered by the Netherlands in the team sprint, ending a run of golds in that event spanning three Games.

There was some consolation for Jason, who collected silver for his eighth medal to become Britain's most decorated Olympian.

The 33-year-old drew level with fellow cyclist Bradley Wiggins in the overall British all-time medals tally, but has one more gold (six) to his name than his former team mate.

Jason could still increase his tally when he defends his individual sprint and keirin titles later this week.

"Every time you come back it gets harder," Jason said. "We knew we had ground to make up and I just had nothing in the final."

Before all that there was chaos and controversy as Britain's male team pursuit squad, minus the injured Ed Clancy, were annihilated by world champions Denmark in their heat.

Denmark, who were accused by the British team of using tape on their shins to go faster in Monday's qualifying rounds, actually caught the reigning champions before the end of the 4km pursuit - a humiliation if ever there was one.

To rub salt into their wounds, Danish leader Frederick Madsen was going so fast he failed to notice that he was about to catch British straggler Charlie Tanfield and ploughed straight into the back of him at 60kph.

As if 'tape-gate' had not caused enough confusion, it was more than half an hour before the Danes were actually confirmed as winners of a heat that ended with angry scenes.

Denmark will face Italy in the final after the Italians broke the Danish world record in a rip-roaring heat against New Zealand, stopping the clock at 3:42.307.

Denmark, who raised the bar in team pursuit when they stormed to world gold in Berlin in 2020 in 3:44.672, will, according to Madsen, have to do so again in Wednesday's showdown against an Italian outfit powered by Filippo Ganna.

"My team mates demonstrated that all the work we've been doing throughout these years paid off," he said.

"They need now just to hold on for 24 hours more, and then if they want to get wasted they can do whatever they want to. I'll be the first to join them."

Germany's women were favourites in the sprints here in Izu. Few predicted what a stunning impact their team pursuiters would make.

When Britain then reclaimed it by beating old rivals the United States to reach the gold-medal ride on Tuesday it seemed that Laura Kenny would once again come through, and claim a fifth gold to move ahead of Dutch great Zijlaard-van Moorsel as the most successful female cyclist in Olympics history.

But Germany immediately took it back in their heat against Italy and in the final found yet another level as they dropped the world record to 4:04.242 - a barely credible six seconds faster than the time Kenny's Britain team rode to take gold in Rio.

"We're just super-happy that we had the run of our life," said Brennauer, who said a switch of strategy during a recent training camp had been the key to their speed.

Kenny, 29, had won the team pursuit and omnium and London and Rio, so silver is not something she is accustomed to.

"Germany took everyone by surprise. We knew they were going to go fast, just not that fast," she said.

A win for the flying Dutch sprint trio of Harrie Lavreysen, Roy van den Berg and Jeffrey Hoogland was less surprising but no less emphatic with Hoogland powering them to gold.

"We came here only for gold," Lavreysen said.

Incredibly it was the first Dutch gold medal in a men's track event at the Olympics since 1936.

It might not be the last one this week. 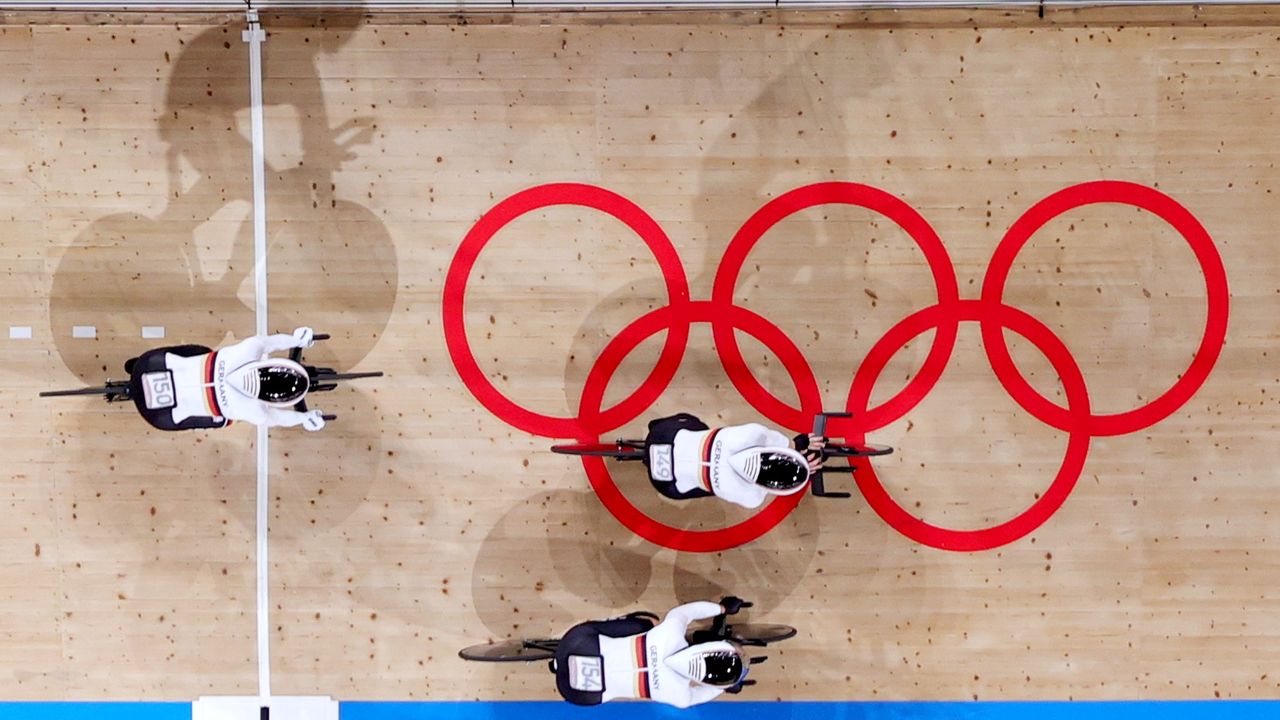 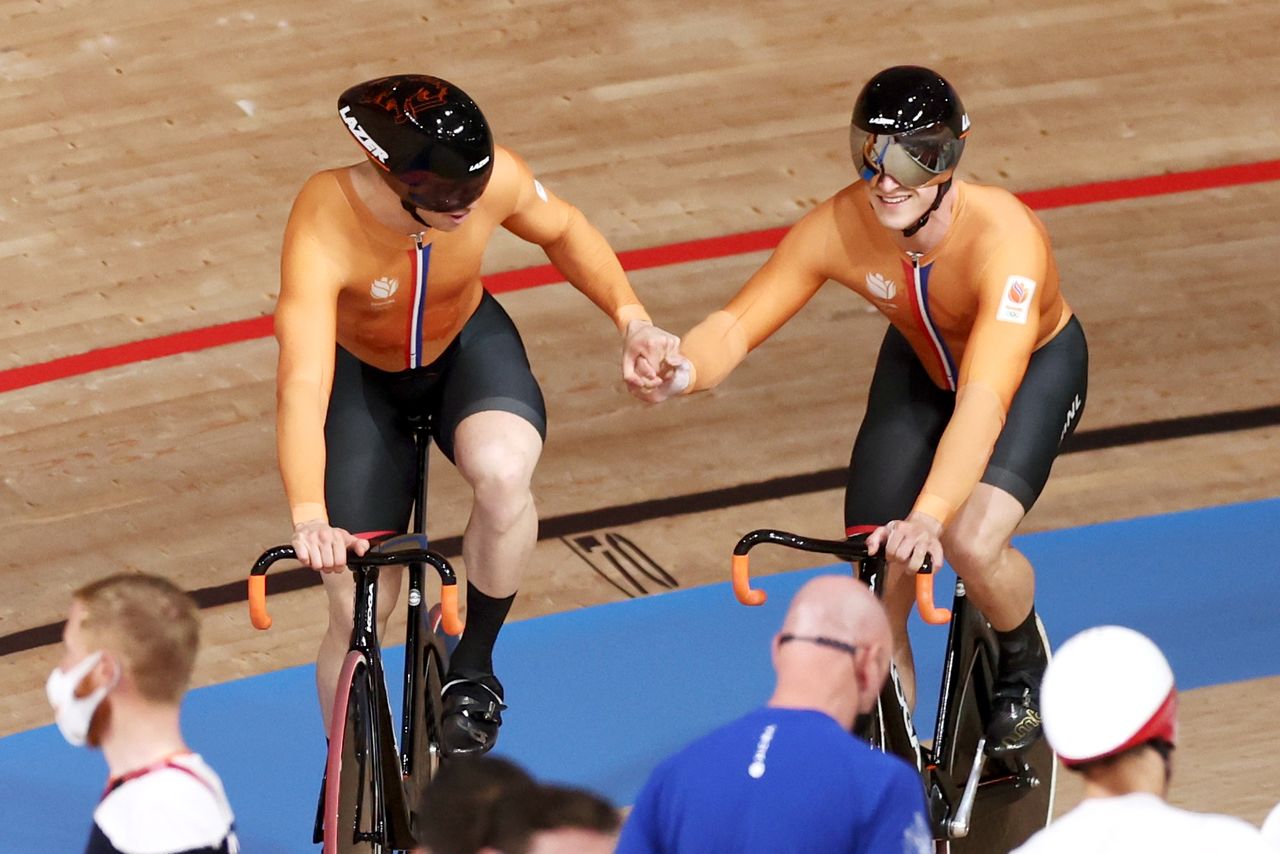 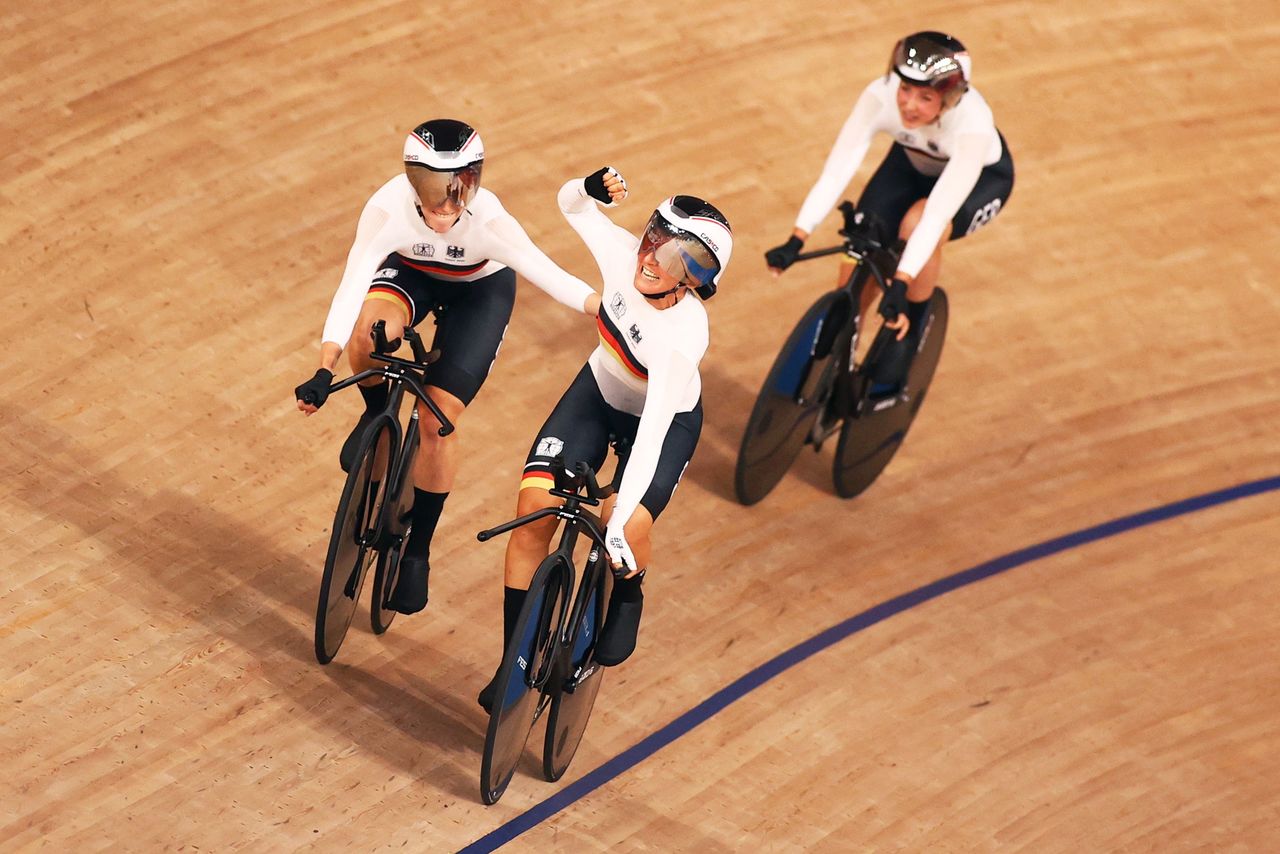 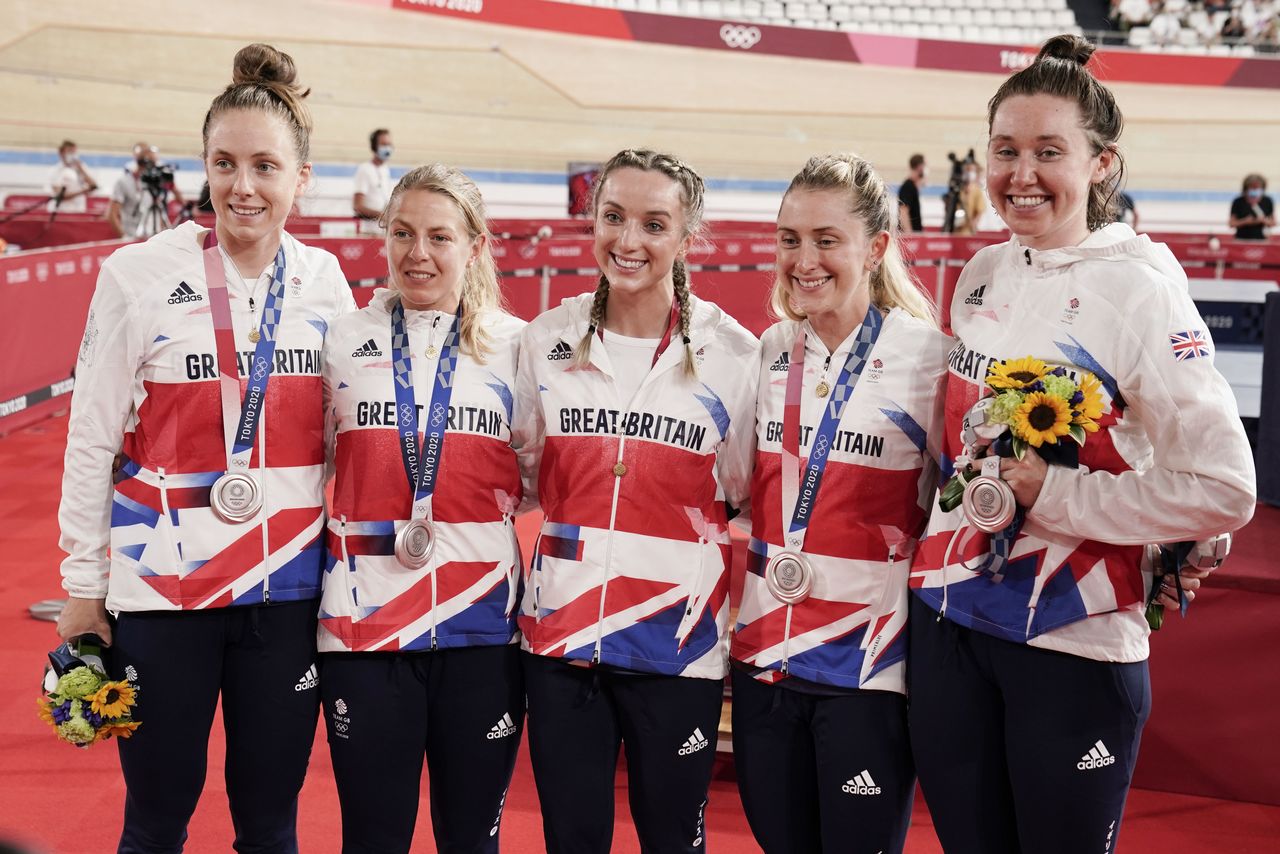 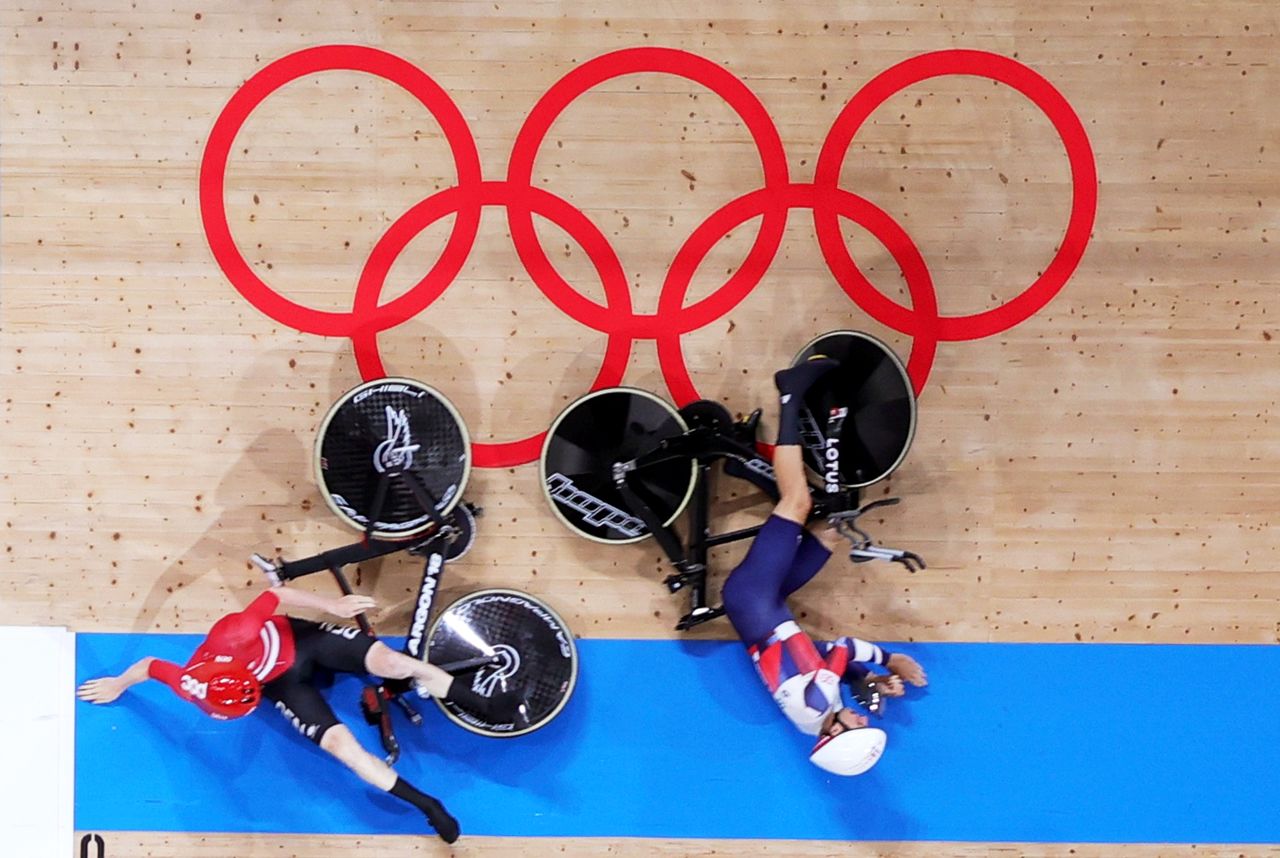