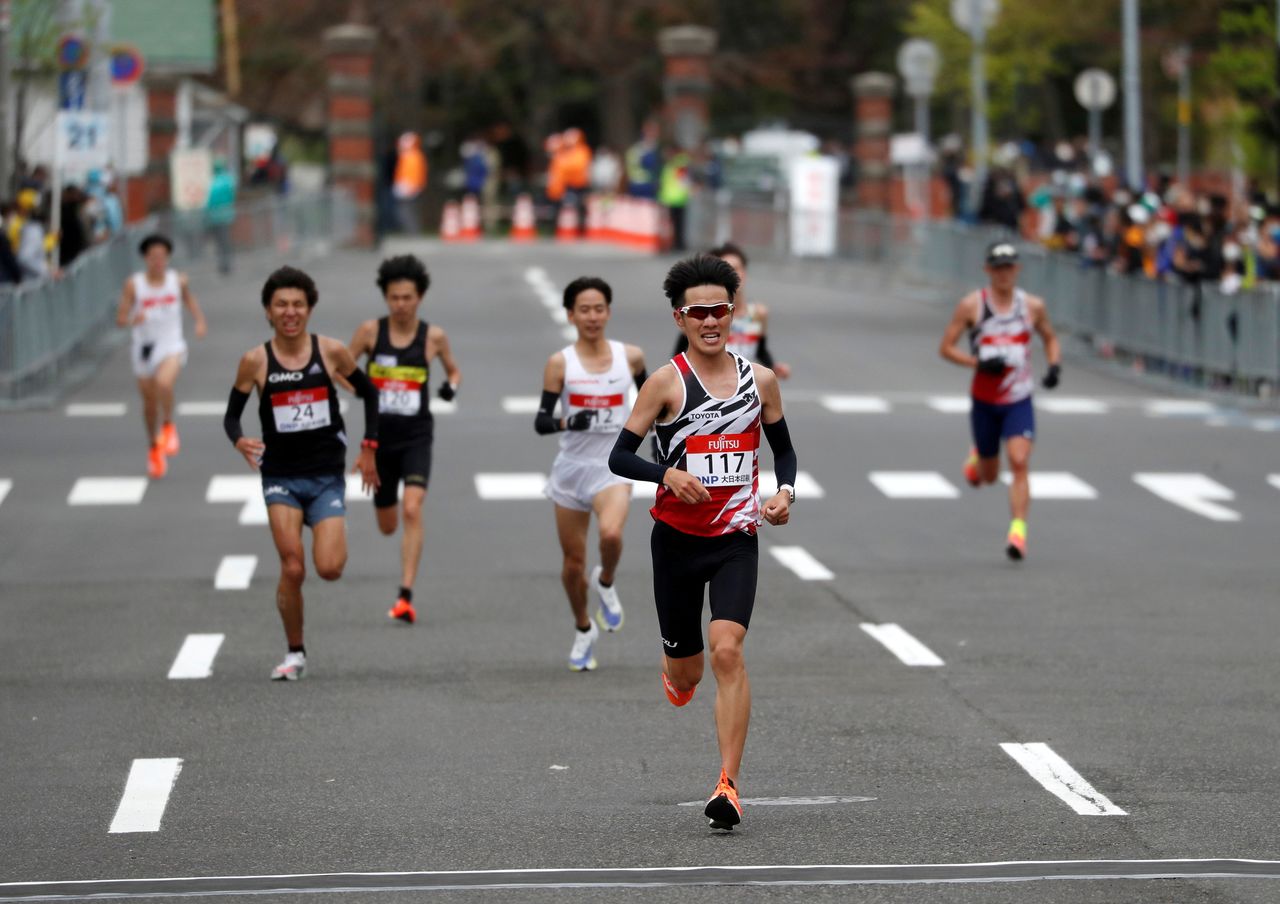 FILE PHOTO: Runners cross the finish line while small groups of spectators are seen during the half-marathon of the Hokkaido-Sapporo Marathon Festival 2021, a testing event for the Tokyo 2020 Olympics marathon race, amid the coronavirus disease (COVID-19) outbreak in Sapporo, Hokkaido, Japan May 5, 2021. REUTERS/Issei Kato

By Chris Gallagher and Sarah Aoyagi

TOKYO (Reuters) - When millions of Japanese tune into the Olympic marathons this weekend they will not only see the world's best runners pushing their bodies to the limit, but also their own lives, said Japan's 2000 marathon gold medallist Naoko Takahashi.

The marathon holds a strong appeal in Japan because of the parallels it holds with everyday life, said Takahashi.

"In a marathon there are many mountains to climb from start to finish," she told Reuters, noting the tough moments in a race when one wants to quit but finds things easier again after exercising patience.

"I think everyone finds it interesting how a race reflects their own lives," Takahashi said.

"They are not just enjoying the time spent running the marathon, but also feel motivated to keep trying hard after returning to their regular lives because of what they have overcome" in the race, she said.

Running races are hugely popular in Japan both in terms of participation and viewership. Up to 12% of the Japanese population say they jog and/or participate in marathons, data by statistics firm Statista has shown previously.

Naoko Ishizuka caught the running bug about 10 years ago when her husband ran in the 10K section of the Tokyo Marathon.

"I thought I definitely wanted to be like those people," said the 48-year-old stay-home mother, who has run 10 marathons after starting out with several 10K races and half-marathons.

Olympic organisers have told marathon enthusiasts like Ishizuka not to watch the races in person in order to prevent gatherings of large crowds that could spread COVID-19.

The move has rankled some fans further after organisers moved the marathon some 800 km (500 miles) north to Sapporo to avoid the worst of Tokyo's summer heat.

"Spectators can get into pro baseball and soccer games as normal. I can't see why it's only the Olympics where they're not allowed," said an annoyed Ishizuka.

The women's race is on Saturday and the men's on Sunday in Sapporo, on the country's northernmost island of Hokkaido.