By Amy Tennery and Gabrielle Tétrault-Farber

TOKYO (Reuters) -Another athletics world record was obliterated at the Olympics on Wednesday, as athletes coped with the heat of political and diplomatic controversy as well as Tokyo’s broiling summer weather https://www.reuters.com/lifestyle/sports/soccer-swedes-canada-ask-womens-gold-medal-match-be-moved-2021-08-04.

American Sydney McLaughlin shattered her own record https://www.reuters.com/lifestyle/sports/athletics-american-mclaughlin-breaks-world-record-win-womens-400-hurdles-2021-08-04 in the 400 metres hurdles while a Belarusian athlete https://www.reuters.com/lifestyle/sports/belarus-sprinter-tsimanouskaya-leaves-polish-embassy-tokyo-police-2021-08-03 left for Poland three days after refusing an order to come home against her wishes and seeking diplomatic protection.

The International Olympic Committee (IOC) was investigating the case of sprinter Krystsina Tsimanouskaya, while querying China https://www.reuters.com/lifestyle/sports/ioc-suspends-protest-probe-into-grieving-saunders-mao-case-continues-2021-08-04 over athletes who wore Mao Zedong badges on the medals podium but suspending a probe of American shot-putter Raven Saunders after the death of her mother.

McLaughlin trailed team mate Dalilah Muhammad coming off the last hurdle but sprinted past her to win gold in 51.46 seconds in a thrilling finish that chopped nearly half a second off her own June record.

"I saw Dalilah ahead of me with one to go. I just thought, 'Run your race'," McLaughlin said. "The race doesn't really start until hurdle seven. I just wanted to go out there and give it everything I had."

Women's distance running continued to captivate, as newly-crowned Olympic 5,000 metres champion Sifan Hassan of the Netherlands progressed to the second of what she hopes will be three finals. However, she will have harder work ahead in the 1,500m in the form of defending champion Faith Kipyegon of Kenya.

But despite the stellar performances in competition, even the fastest woman https://www.reuters.com/article/us-olympics-2020-instagram/olympics-sprint-queen-herah-thompson-says-was-blocked-on-instagram-over-tv-rights-idUSKBN2F50OD in the world could not outrun Tokyo 2020 broadcast rights holders.

Jamaica's gold-medal sprinter Elaine Thompson-Herah said she had been blocked on Instagram for posting videos of her wins in the 100 and 200 metres.

"I was blocked on Instagram for posting the races of the Olympic (sic) because I did not own the right to do so. So see y’all in 2 days," she wrote on Twitter. The IOC said the removal was automatic as athletes may not "natively" post content controlled by rights holders.

Belarus's Tsimanouskaya, who had taken refuge in the Polish embassy, left in the morning, escorted by officials and wearing a mask, blue jeans, a blue blouse and sunglasses with "I RUN CLEAN" written on them.

The IOC said it was investigating the case, which began after the sprinter publicly criticised her coaches during the Games, which end on Sunday.

The IOC also said it was awaiting a formal explanation from Chinese Olympic officials as to why two gold medallists wore badges featuring Mao, the founding leader of the People's Republic of China, when Olympic rules bar political statements on the podium.

At the same time, the IOC expressed condolences to silver medallist Saunders after learning of her mother's death.

"You will understand that given these circumstances the process is fully suspended for the time being," said spokesman Mark Adams.

Saunders had crossed her arms in an "X" over her head on the podium on Sunday, a gesture she has said represented "the intersection of where all people who are oppressed meet". She said she hoped to inspire fellow LGBT and Black people, and those struggling with mental health.

Away from politics, Italy set a second world record in as many days in the men's pursuit, upsetting favourites Denmark at the Izu Velodrome with an electrifying finish powered by Filippo Ganna that clawed back almost a second in the closing laps.

Cuba went top of the boxing medals table as Arlen Lopez won his second Olympic title, taking the men's light-heavyweight gold with a cool, skilful performance against the fast-punching and tenacious Ben Whittaker of Britain.

In Enoshima south of Tokyo, Matthew Belcher became Australia's most successful Olympic sailor of all time as he and team mate Will Ryan of Australia stormed to gold in the men's 470 sailing class, while Britain's Hannah Mills and Eilidh McIntyre won the women's competition to close the regatta.

"I didn't plan it to happen this way, but I'm extremely happy," said Cunha, sporting a shock of fluorescent green and yellow hair perfectly colour coordinated with her Brazilian uniform.

Athletes not in the water or indoors continued to roast in the brutal Japanese summer.

With trackside temperatures at the athletics stadium having hit 40 degrees Celsius (104 degrees Fahrenheit) and an archer having collapsed, Sweden and Canada asked organisers to push back the start of Friday’s women's gold medal soccer match, which is now scheduled for 11 a.m. (0200 GMT)

"It is primarily about the players' health," said Marika Domanski Lyfors, the head of Sweden's women's team. "There's a pretty big difference between playing in the afternoon or evening."

More chill were teen Japanese and British skateboarders, who shredded and soared through the preliminaries in a lively Olympic debut of the women's park competition. 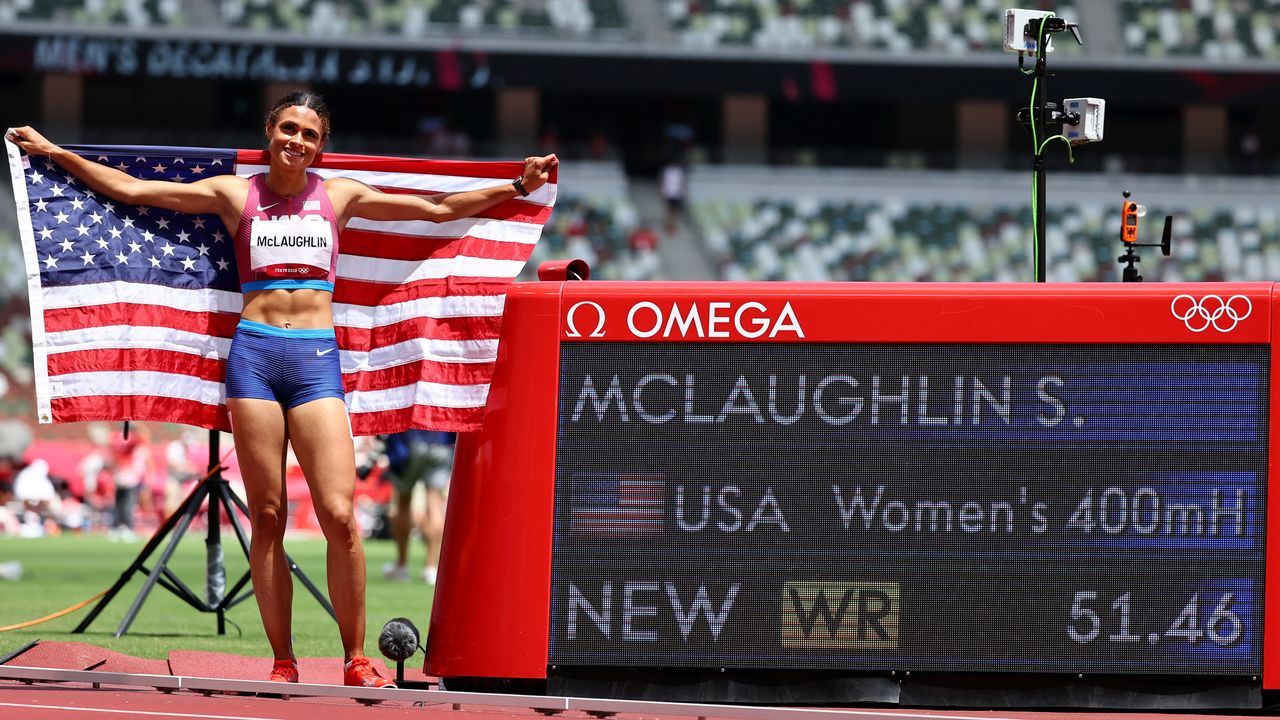 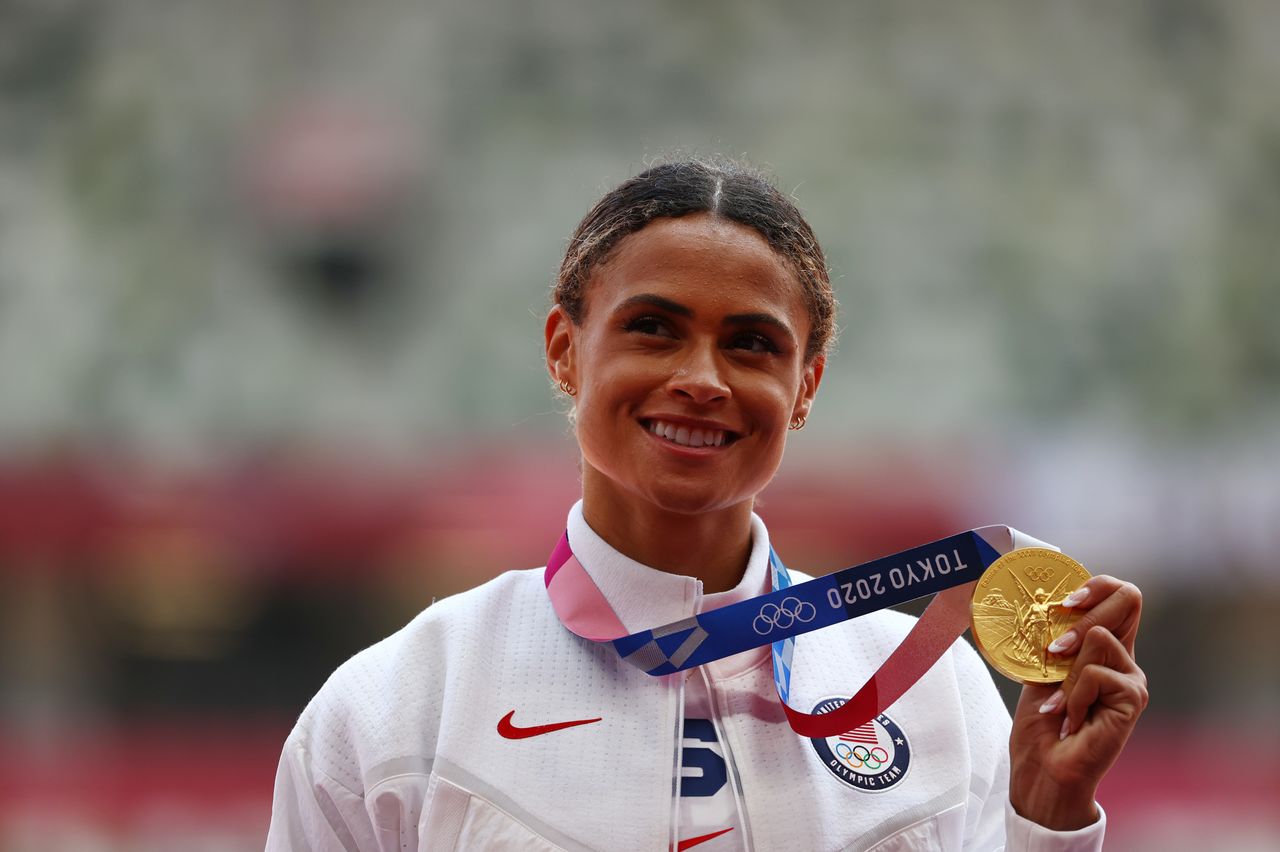 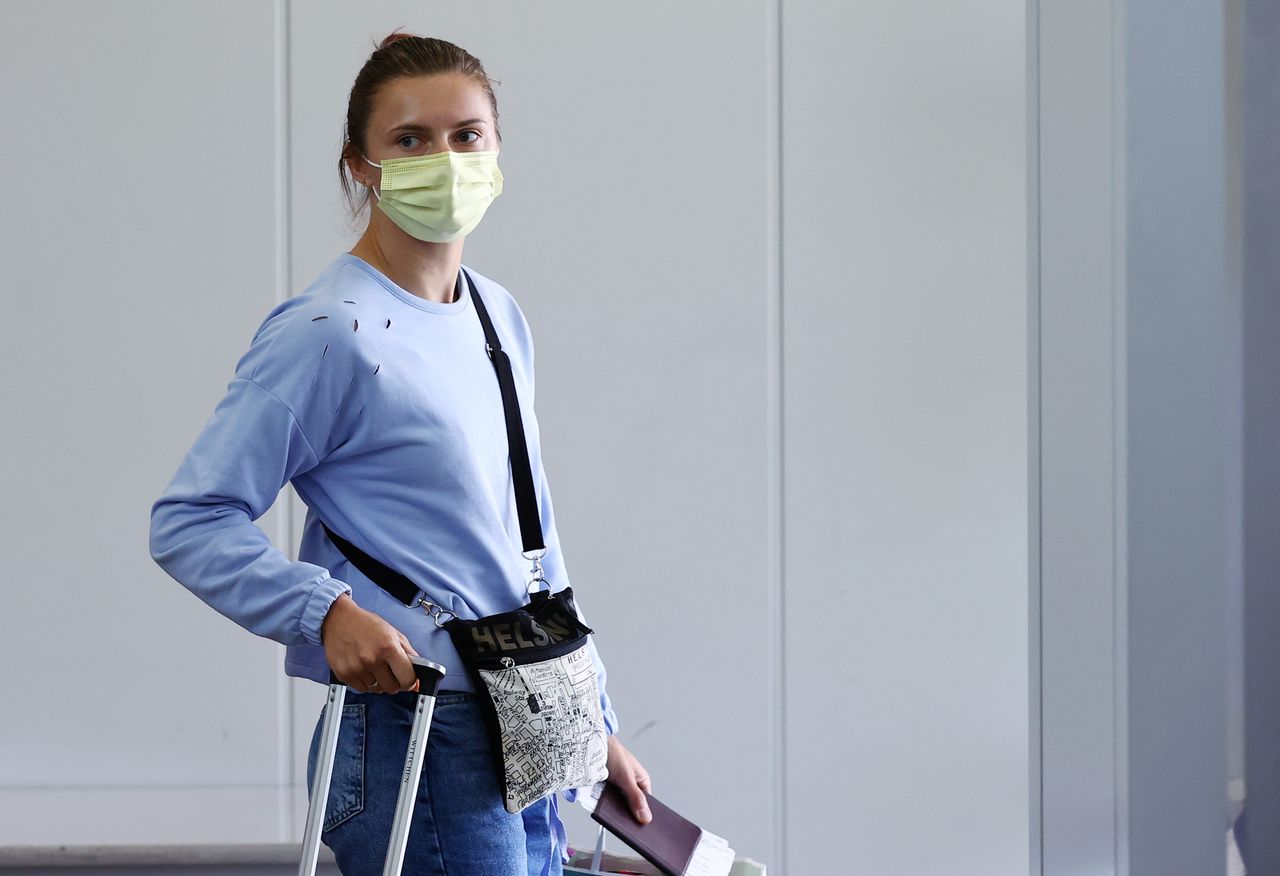 Belarusian Sprinter Krystsina Tsimanouskaya who took refuge in the Polish embassy in Tokyo, looks on while boarding a flight to Vienna at Narita International Airport in Narita, east of Tokyo, Japan August 4, 2021. REUTERS/Kim Kyung-Hoon 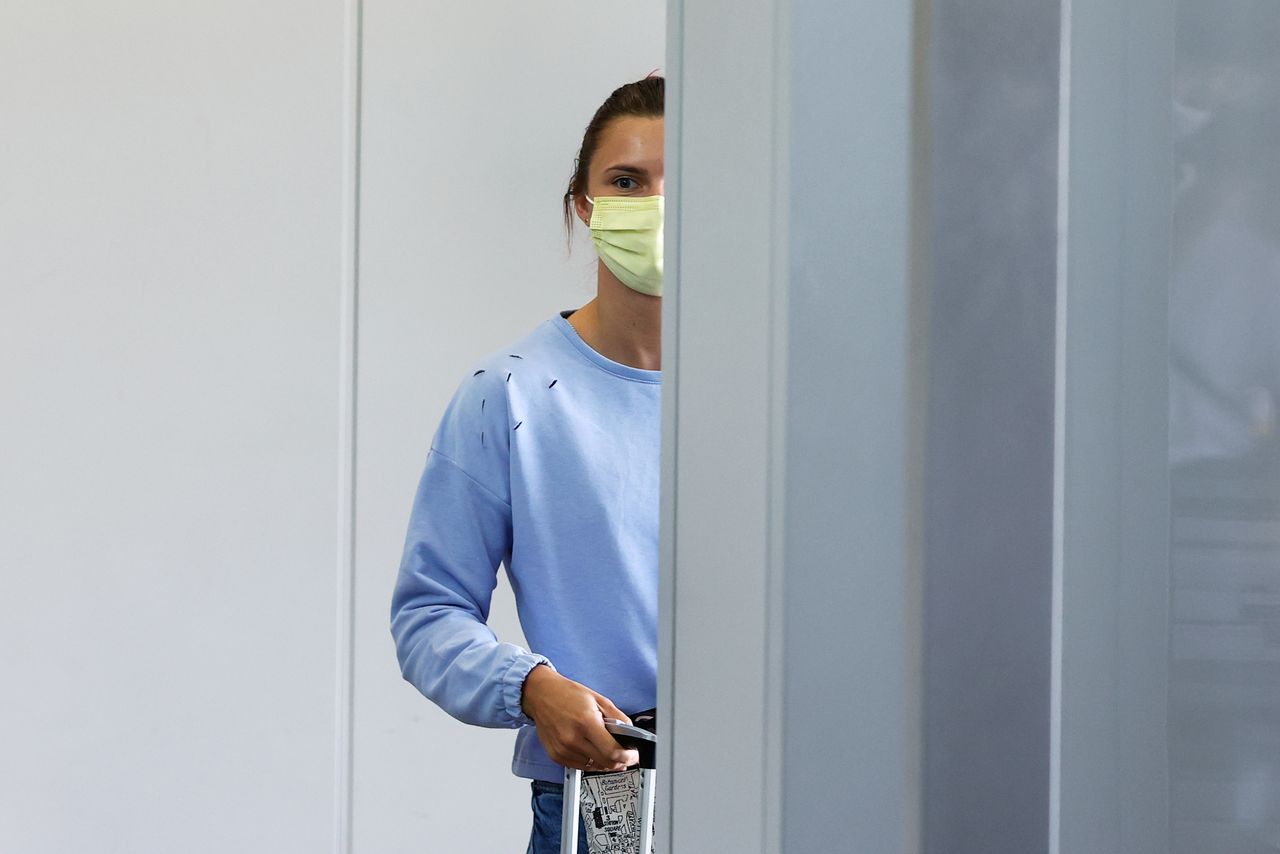 Belarusian Sprinter Krystsina Tsimanouskaya who took refuge in the Polish embassy in Tokyo, looks on as she boards a flight to Vienna at Narita International Airport in Narita, east of Tokyo, Japan August 4, 2021. REUTERS/Kim Kyung-Hoon 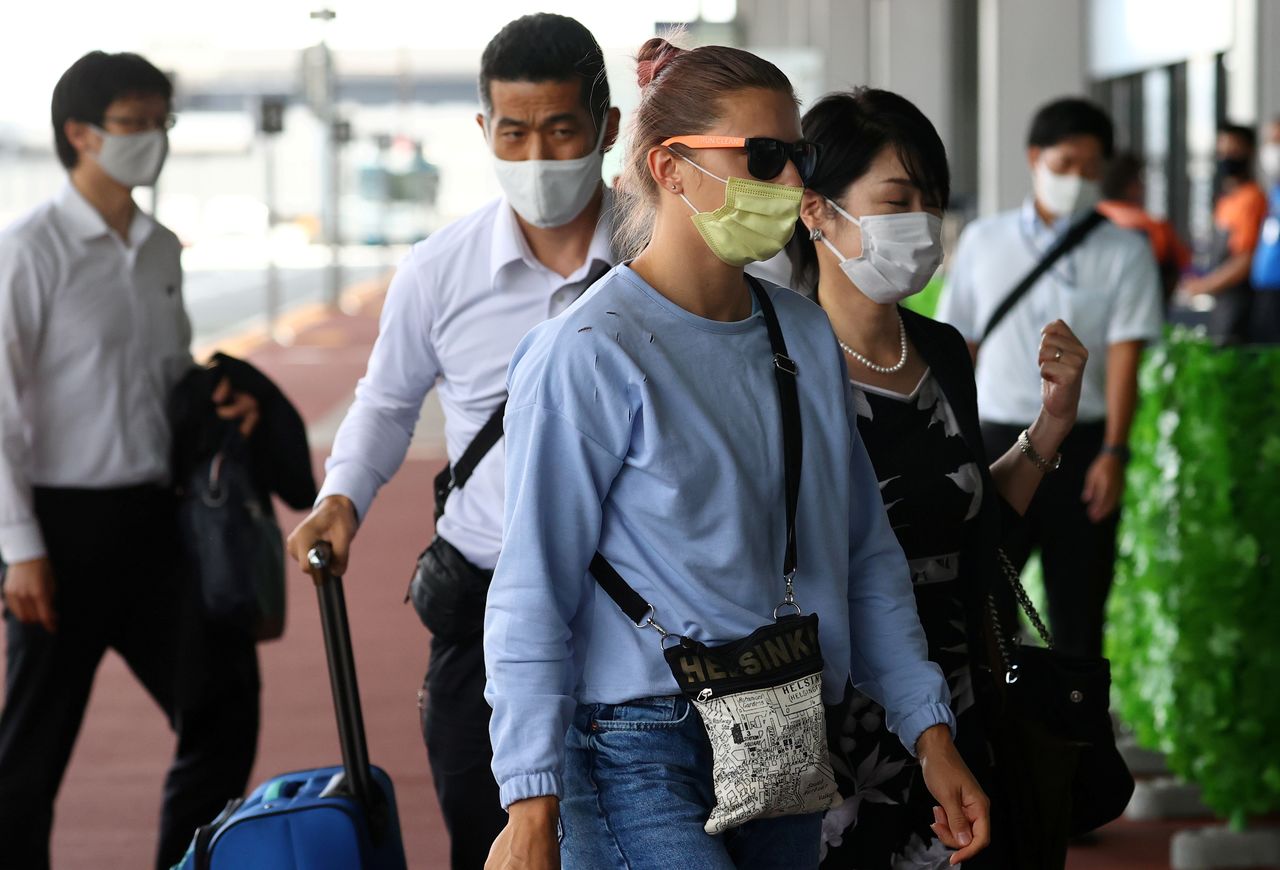